Throughout the year, Kitain Temple in Kawagoe is probably best known for its 500 rakan, a collection of actually about 540 very life-like stone statues of early disciples of the historical Buddha. The rakan statues make for fun viewing and display the lighter side of Buddhism.

On January 3rd, however, daruma dolls are at the focus of festivities. Arriving at either one of the two main Kawagoe railway stations in the late morning, you will already spot plenty of people carrying these good luck dolls towards their train home. Daruma dolls come in all sizes though obviously, only the really big ones will be visible at the station, the ones that don't fit into luggage. 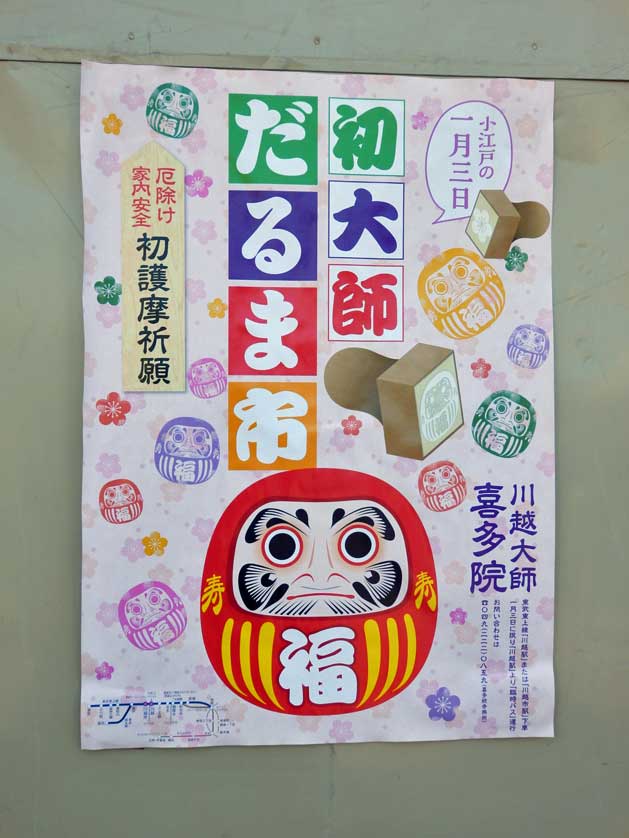 The daruma dolls all have the same design, though: bearded heads with a flat base where the neck should be. The edge of that base is slightly rounded, making the daruma doll a roly-poly toy. The spots where the eyes should be are white and blank. The areas outside the immediate face are bright red, though you might spot a deviation from that general rule here or there.

The closer you walk towards Kitain temple, the more people you will encounter carrying daruma dolls in plastic bags or simply under their arms. Soon, the trickle of people turns into a constant stream crowding the sidewalks.

Once you enter the entrance road to the northern gate of Kitain at Naritasan Kawagoe Betsuin Temple (that temple also crowded and busy with its own New Year's celebrations), walking speed slows down to a crawl. 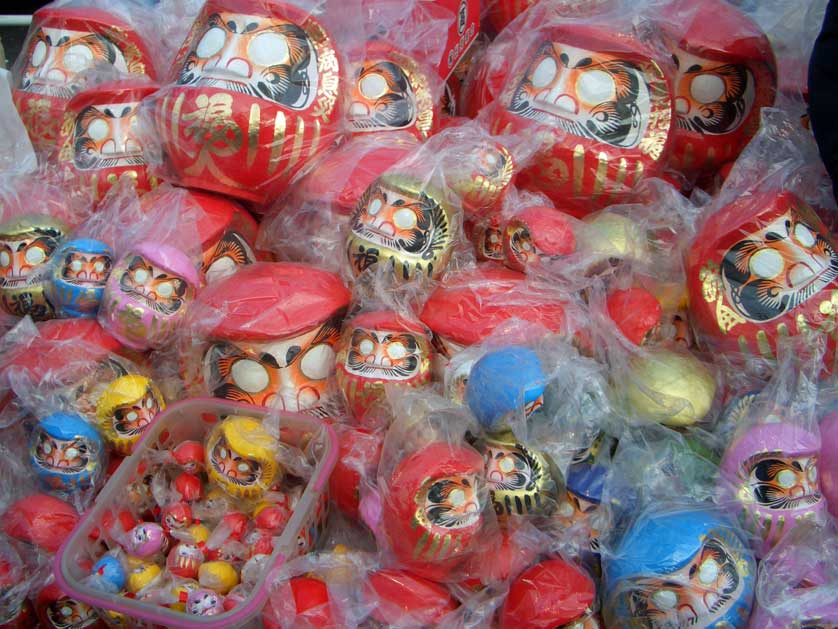 To the left of the street, daruma doll traders have put up their stalls. Lining up one after another as far as the actual gate of the temple. To the right, a wide variety of food sellers offer their wares: fried squid, yakisoba, karaage fried chicken - traditional food typical of Japanese festivals.

While you slowly make your way through the masses towards the temple gate, you might spot that the license plates of the trucks behind the daruma doll sellers have all been issued by the same prefecture: Gunma.

In fact, they are all coming from Gunma's Takasaki city. The Daruma Dera temple in Takasaki is regarded as the birthplace of the daruma doll back in Edo times. From Takasaki, the dolls spread all over Japan. Today, about 80% of all daruma dolls sold in Japan are still made in Takasaki. So are all daruma dolls on sale in Kawagoe. 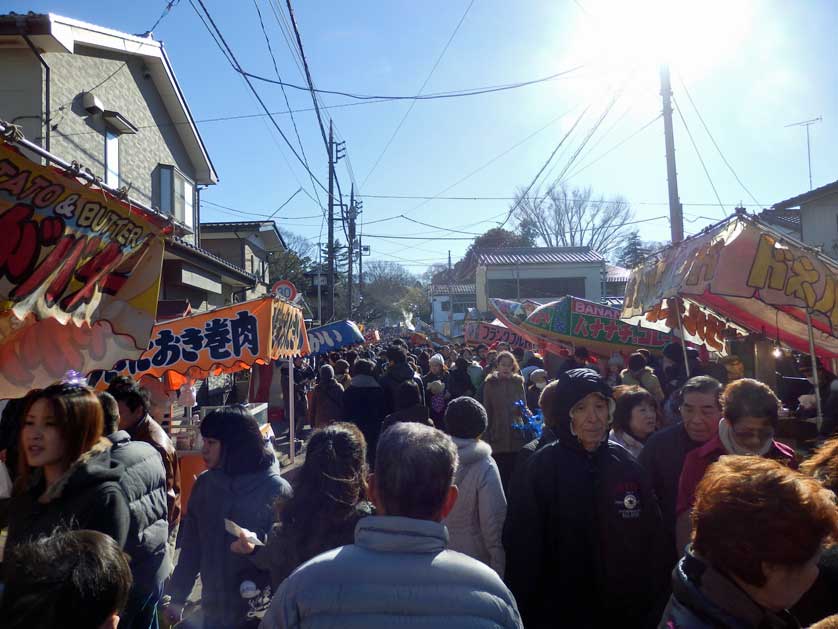 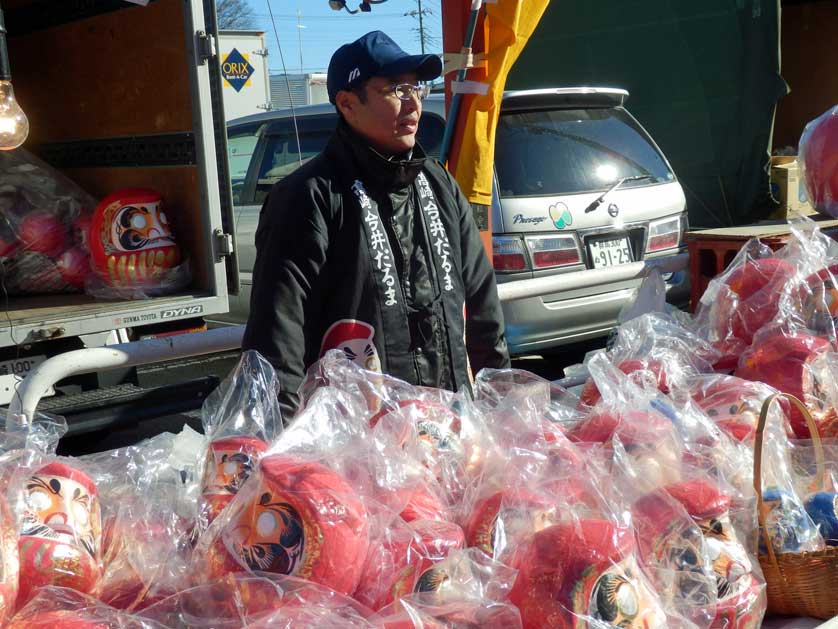 Looking at the faces of Takasaki daruma dolls, you can recognize their specific features: eyebrows that look like cranes, the beard shaped like two turtles. It needs a little imagination to actually make out the turtles but anyway, both animals represent long life in Japanese culture.

Their roly-poly capacity symbolizes the ability to overcome adversity, to be able to successfully achieve the goals set.

Sales are be brisk even out here way in front of the temple gate and a jolly, hopeful new year's mood prevails. People buy the dolls as lucky charms for the New Year. 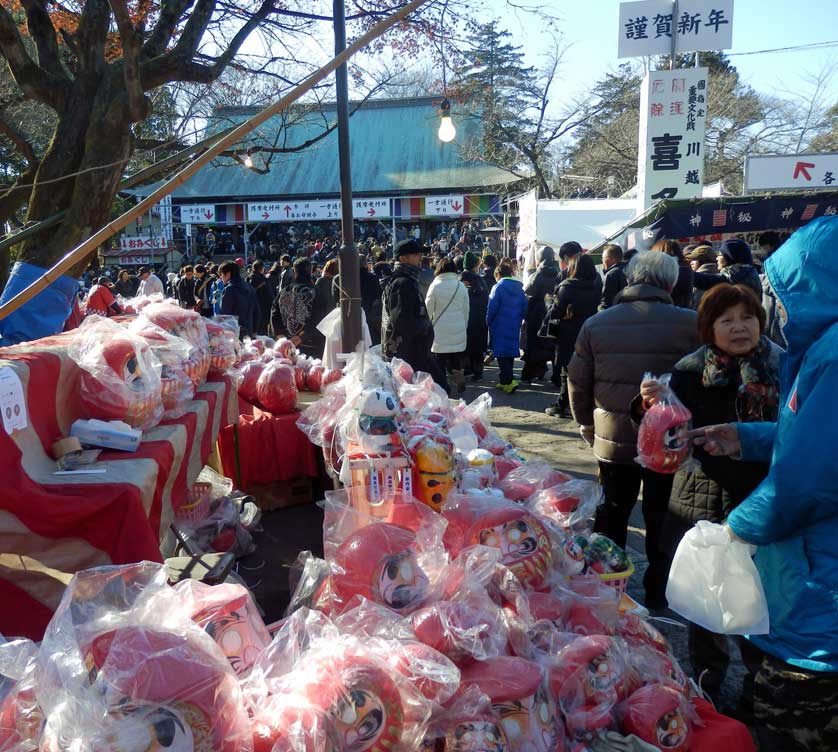 People lining up at Kitain for their New Year prayers, Kawagoe, Saitama 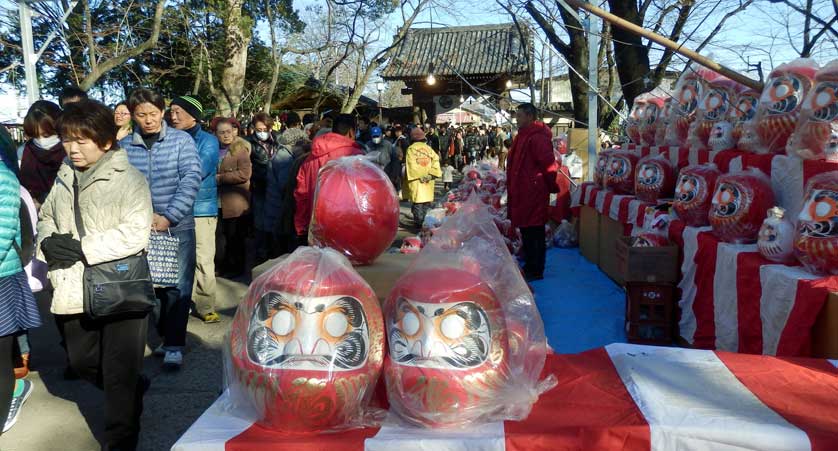 The waiting line for prayer at Kitain extends out the Eastern (Sanmon) Gate, Kawagoe, Saitama

People will place the dolls in their homes, think about one particularly important goal they want to reach within the year and will then draw one eye onto the doll. The doll will remind them of the goal whenever they look at it. Once the goal has been achieved, the task been accomplished, they will thankfully draw the second eye onto the daruma doll.

As so often with traditions that look like lighthearted folk customs today, there is a deeper background to it - relating to dark and violent legends of the distant past. 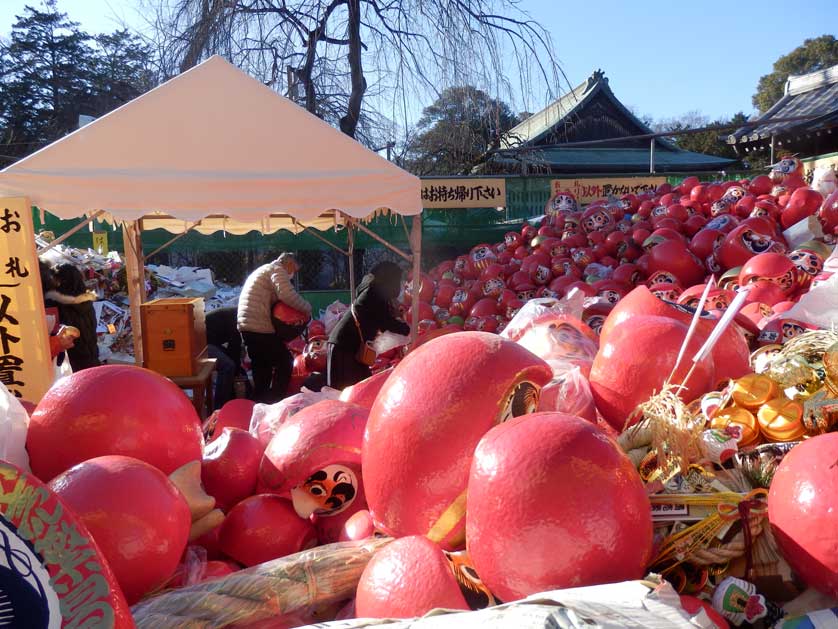 The doll was shaped by the Edo era imagination of Bodhidharma, a monk who came to China in the 5th or 6th century B.C., probably from India though the sources disagree on his actual origins. He is credited to have brought the new meditative school of Chan Buddhism to the empire considering itself the "center of the world".

Arriving at the Shaolin Monastery, the bearded, irascible preacher from beyond the Himalayas was not welcomed by the resident monks. To prove his point, Bodhidharma went into a hermitage close to the monastery and stared at a stone wall in a meditative state for the next nine years.

The accounts differ but either his eyes simply withered away after such a long time of staring or, to cite the more popular myth, he fell asleep during his meditation and to ensure that that would never happen again, cut off his eyelids.

In either case, that's why the daruma dolls sold today have no eyes.

Bodhidharma may or may not have been taken in by the temple after his ordeal but his teachings certainly prevailed. Chan Buddhism took China by storm after his eventual demise. In the 13th century, the teachings eventually made it to the shores of Japan and morphed into Zen Buddhism here. 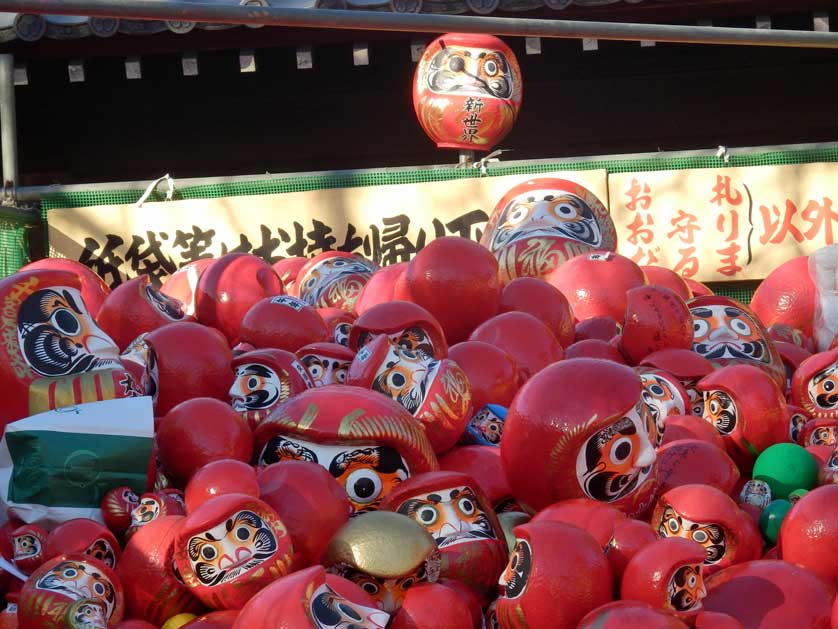 The dolls sold are based on Bodhidharma - but the festival itself is called Hatsudaishi. Why? Hatsudaishi translates as "First Teacher" but it is not Bodhidharma who is meant as first teacher here. That's rather Ganzan Daishi, a legendary Japanese monk better known by the name Ryogen.

Ryogen pushed through his version of strictly disciplined proto-Zen Buddhism at Enryakuji Temple on Mount Hiei near Kyoto in the 10th century and his warrior monks became a military and political force exerting their influence for centuries. The then emperor honored him posthumously by giving him the rank of Jie Daishi, Grand Teacher. That title was handed out on the "3rd day of the first month" which then became a holiday celebrated by the many Japanese temples that consider their own teachings as derived from Ganzan Daishi.

With the introduction of the Western calendar in the early years of the Meiji era (early 1870's), the date shifted from late winter according to the Chinese lunar calendar to January 3rd.

The daruma dolls are on sale, but the holiday actually belongs to Ganzan Daishi here at Kitain. Sounds complicated? In fact, at the same day and time Kitain temple also celebrates the memory of the monk Sonkai who had re-established Kitain in 1292 after it was burned down during fighting almost a century earlier.

None of all those old legends seem to matter to the visitors crowding the temple on January 3rd. Today, that day is the last of the New Year holidays and it's the time to pray to the gods for a successful new year while at the same time buying the daruma dolls as lucky charms. 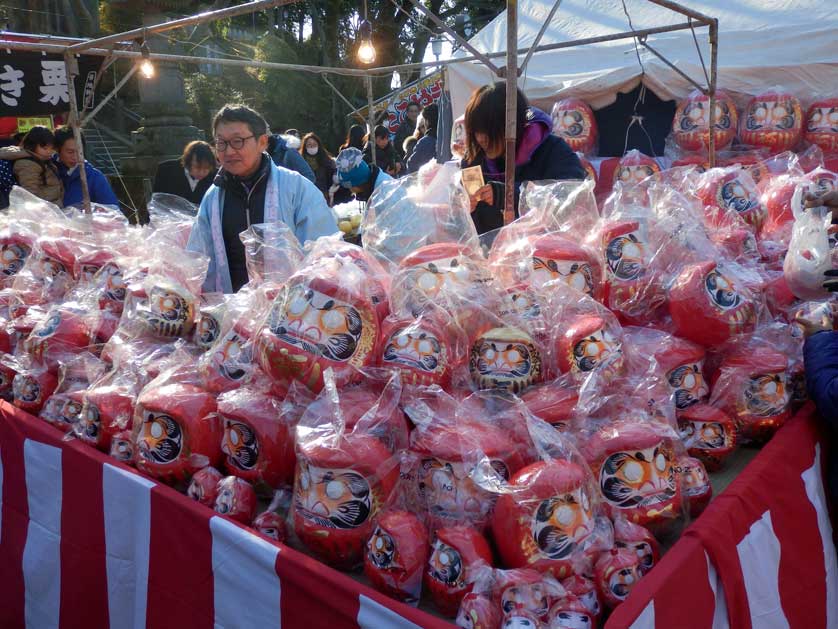 Burning of the Daruma Dolls

But first things first. What about last year's daruma dolls? The ones that had their second eye drawn in, marking the successful completion of a particular important project? The ones still left one-eyed, perhaps because the project failed?

The temple has reserved an area to return them. They will be burned later on by the temple staff in a holy ceremony and can thus return to the heavens after doing their hard work down here, purified from all earthly dirt by the flames.

Under the old cherry trees on the temple grounds, many more daruma doll sellers and food vendors have opened up their shops. Cutting right through the temple grounds is a long line of patiently waiting people stretching out beyond the Eastern (Sanmon) Gate, lining up to pay their respects to the gods on the occasion of the New Year.

Just like at major Shinto shrines at the same time of the year. Gods are gods, Buddhist or Shinto, in Japan they traditionally complement each other.

Prayers, donations to the temple and the new daruma dolls will surely help to meet the challenges of the upcoming year.

All the while, neighbors, friends and acquaintances meet up at the wooden tables in front of the food stalls, talking, gossiping and generally renewing their relations in the relaxed environs of a big festival. The gods might work some wonders here too. 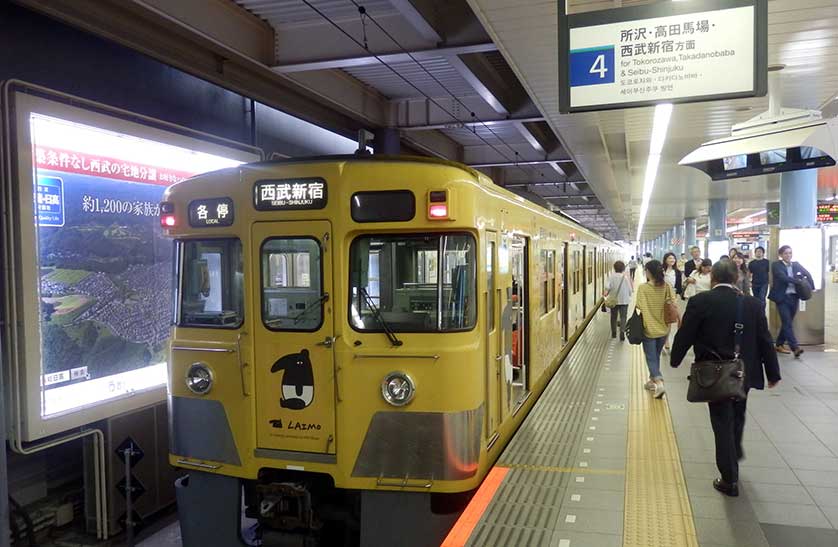 English-language city maps are easily available at the tourist information desks at both stations.

Festival date and time: January 3rd, 9 am to sunset.

Alternatively take the Seibu Shinjuku Line Koedo Limited Express train from Shinjuku Station to Hon-Kawagoe, which is the nearest station to the historic area.

There are buses to the kurazukuri zone of Kawagoe from both Hon-Kawagoe and Kawagoe stations.