Nio guardian statues are found at Buddhist temples throughout Japan and they guard and protect the temple from evil spirits and demons as well as human robbers.

Surprise is often the reaction the first time you see Nio, the guardian statues at many of the larger Buddhist temples in Japan. With their bare-chested bodies rippling with muscles, fierce visages, and brandishing weapons they seem violent and threatening, quite antithetical to concepts most people associate with the Buddhist religion: compassion, peace, serenity, non-violence etc. 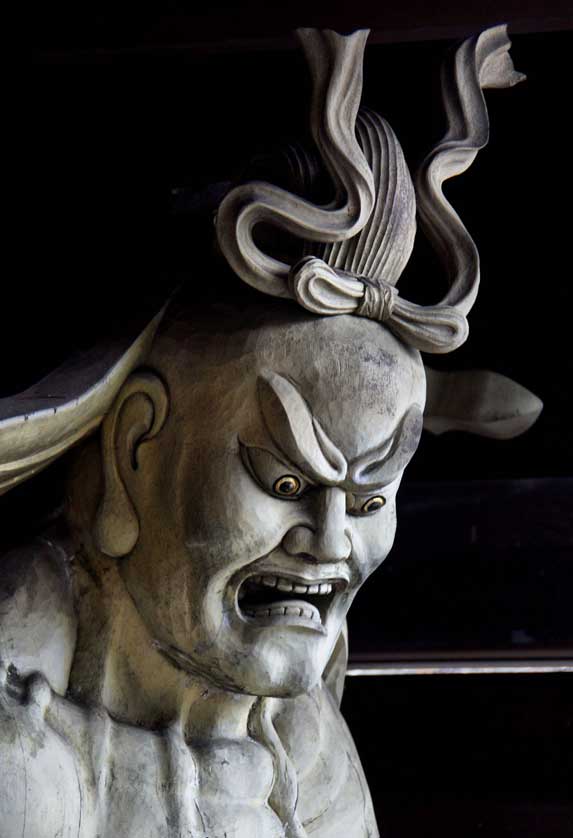 An agyo nio at Senjyu-ji temple, in Ehime, number 58 of the 88 temple Shikoku Pilgrimage, Japan 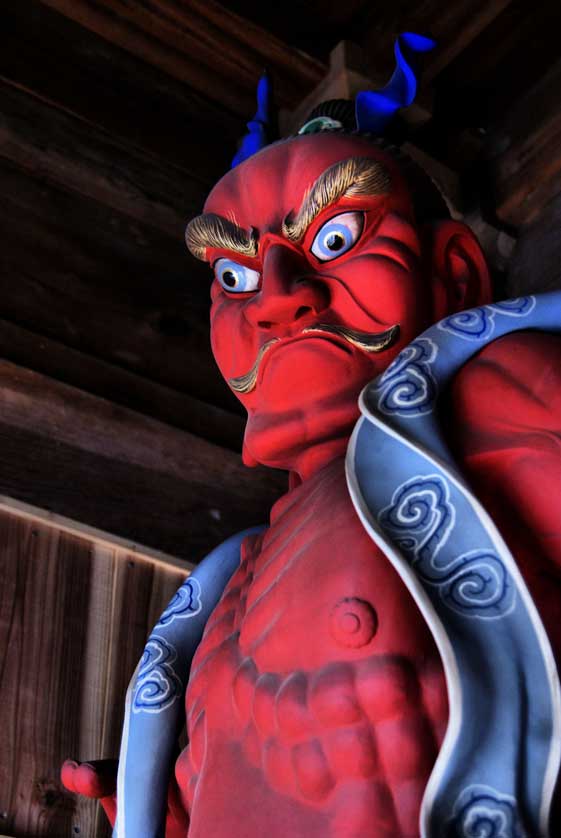 An ungyo nio at Enko-ji, temple 39 of the Shikoku Pilgrimage

The Nio are there to guard and protect the temple from evil spirits and demons but also human robbers. The vast majority of Nio are made out of wood and are usually housed in their own gate houses to protect them from the weather.

These Niomon, Nio gates, are often the first gate leading to a temple. In Kyushu, especially in the Oita area, the tradition is to carve Nio out of stone and these will often be found outside exposed to the elements. There is also a modern stone Nio design that is appearing more and more throughout the country.

Like other forms of Buddhist art in Japan there are a wide range of styles for Nio. Some were created by highly ranked artists and have been repaired and renovated and sometimes freshly painted. Others have virtually no paint left except for traces, and yet others display layers of peeling that show earlier renovations. 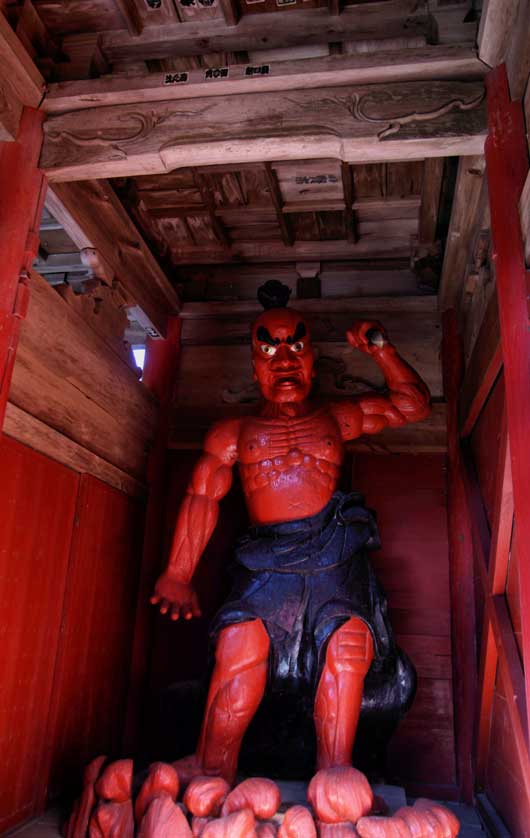 An agyo nio at Kongofukuji temple in Kochi, number 38 of the 88 temple Shikoku Pilgrimage. Red is the most common color for Nio if they are painted. 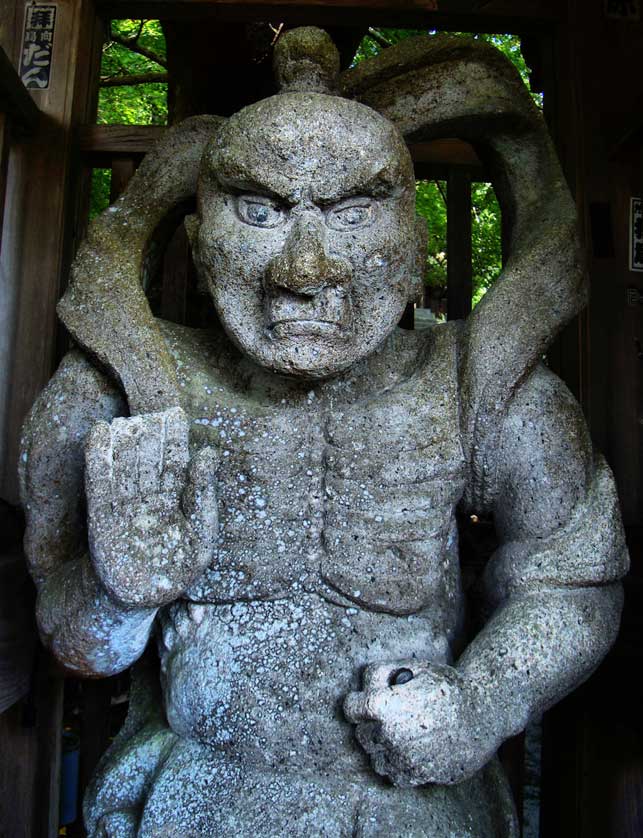 The stone Nio found all over the Kunisaki Peninsula in Oita are simpler in form than most wooden ones, but exhibit a great diversity of styles.

Some Nio are quite crude but quite expressive, made by folk artisans, but no matter their pedigree or age,  Nio always come in pairs, and, like the komainu, one will have an open mouth, the other closed.

The open-mouthed one is making the "a" sound and is known as "agyo" and the closed-mouth is making the "n" sound and is called "ungyo". These are the first and last syllables in Japanese and symbolize beginning and end, birth and death, equivalent to the alpha and omega in Greco-European culture. 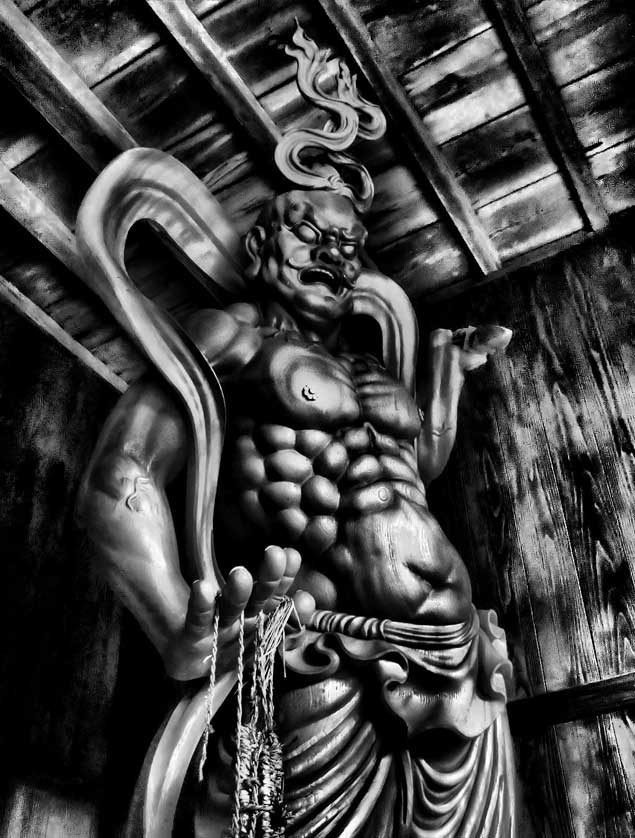 Because of their scale, most Nio are carved out of several pieces of wood connected together, but the nio at Tadai-ji in Hamada, Shimane are unusual for being carved out of a single block of wood.

The word nio itself is said to mean "Benevolent Kings" and some stories say they traveled with and protected the historical Buddha. Nio are also known as Kongo Rikishi and Shukongoshin.

Alternatively nio are known as Misshaku Kongo and Naraen Kongo. Like their Chinese and Korean counterparts they are believed to be Hindu deities, Vajra Dahra, thunderbolt holders, incorporated into Buddhism as protectors, however there is a theory that suggests that the Greek god Heracles (Hercules) had some influence over their form with the spread of Greek culture from the first to sixth centuries CE in the Buddhist lands of Gandhara, in what is today modern-day Afghanistan and Pakistan.

The oldest extant examples known in Japan are from Horyu-ji Temple in Nara and are dated 711. Probably the most famous one are the pair found at Todai-ji Temple in Nara, towering 26 ft in height, they date from 1203. The nio at Shitennoji Temple in the Tennoji district of south Osaka are also well noted as are the nio guardians at Ninnanji Temple in Kyoto. 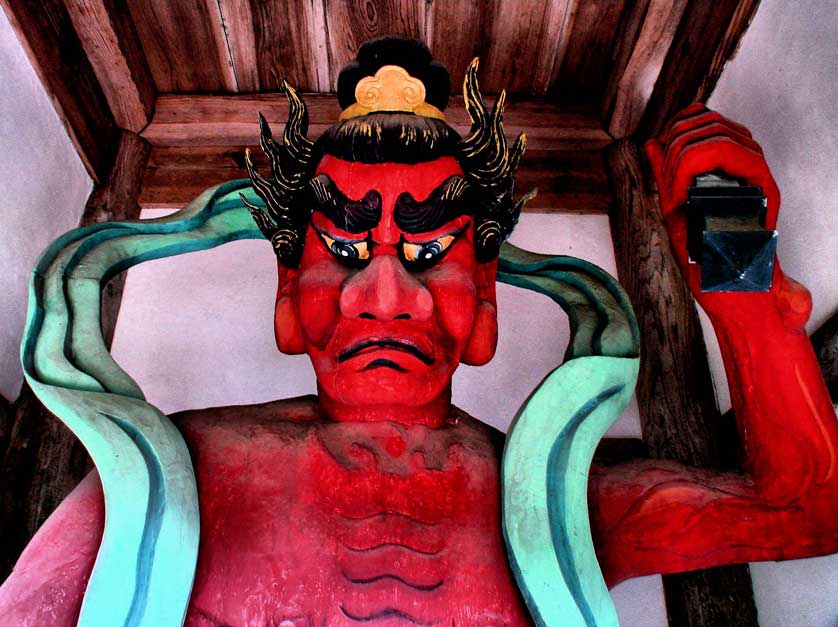 An ungyo nio at Takano-ji Temple, a mountaintop temple in Shimane. While large and rich temples will have nio that are artistically sophisticated, poorer temples' nios will often be cruder, but often quite expressive.