Rakanji Temple in Nakatsu, Oita. Read a guide to Rakanji Temple, a temple built into a mountain, incorporating numerous caves, and thousands of stone buddhas.

Rakan-ji Temple in Nakatsu City, Oita Prefecture, is one of Oita's grandest temples. Rakanji Temple is a mountain temple built into the towering cliffs of Mt. Rakan. 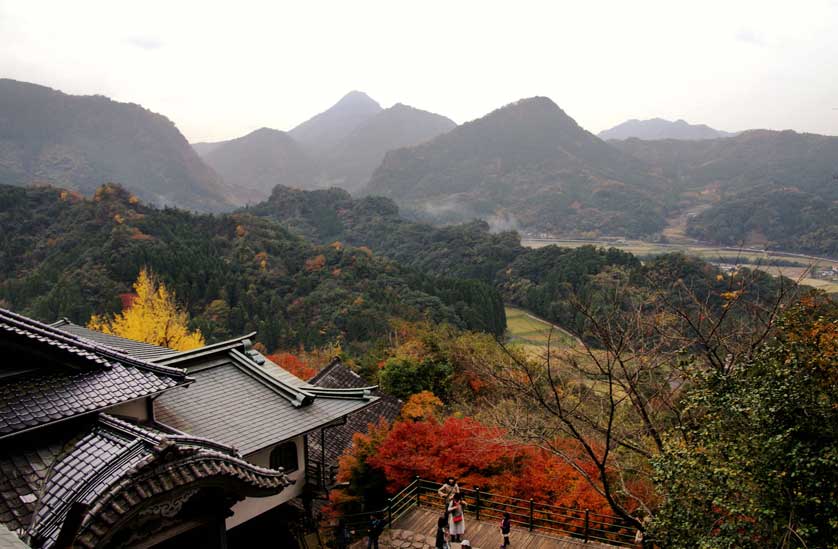 The view from the balcony of the main hall of Rakanji Temple, Oita

Rakanji dates from the 13th century and is famous for its several caves and its over 3,700 stone buddhas. A chairlift (or stone stairs for the hale and hearty) takes you from the entrance to the premises up to Rakanji itself, and then on to the top of the mountain for a panoramic view of the surrounding peaks and valleys. 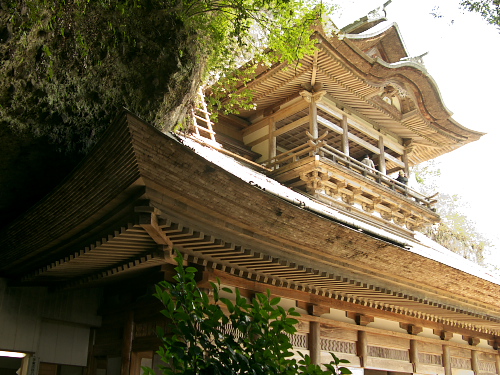 Rakanji Temple, built into a mountain

Rakanji is a Soto sect Buddhist temple. Rakanji was founded in the year 1337 by the priest, Engan Shogaku. It is said to be the site where the Indian monk, Hodo, lived a life of asceticism in the caves here in the mid-seventh century A.D.

Rakan is the Japanese rendition of arhat, which in Buddhism is one who achieves a certain state of liberation short of full enlightenment. The Five Hundred Arhats are a group of arhats celebrated in East Asian Buddhism. Rakanji is one of three famous temples in Japan named after them.

The main temple building of Rakanji was destroyed by fire in 1943, and meticulously rebuilt in 1969. 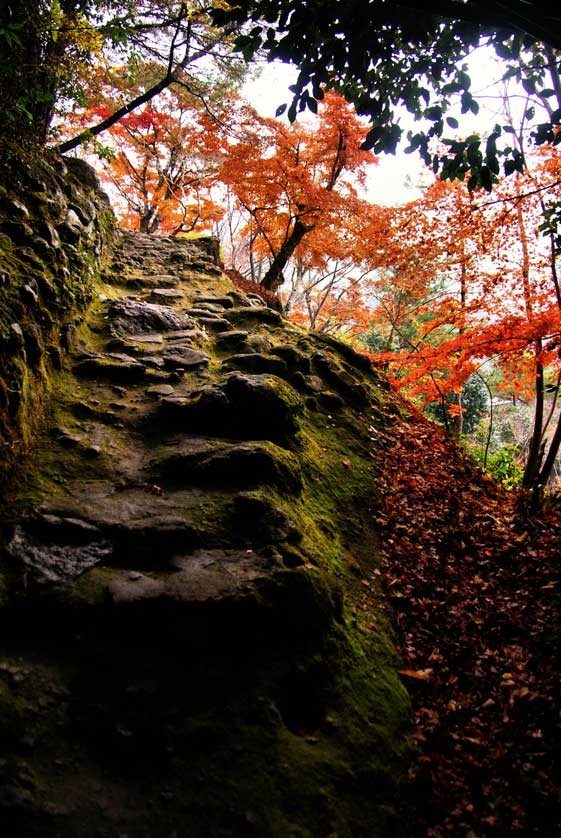 From the balcony of the main hall at Rakanji there is an arched footbridge that passes more statues and then the path winds up the mountainside to sites of older, no longer extant, temple structures with further views over the countryside

Rakanji Temple takes up almost the whole face of Mt. Rakan. From a distance, the temple seems magically woven into the apertures and contours of the mountain and its towering prominences.

The first notable building, right beside the chairlift, is the Zenkai-do, a small shrine-cum-museum to the priest Zenkai who, in the Edo era of Japanese history, spent 30 years digging the nearby Aonodomon Tunnel by hand through rock, to enable easier access for worshipers to Rakanji.

From the Zenkai-do to Rakanji Temple, there are stone steps, requiring a steep walk of at least 30 minutes, or a scenic chairlift ride which, for a fee, will take you there in about five minutes.

The most impressive sight is the Sanmon (Mountain Gate), just before you reach the temple proper. The Sanmon of Rakanji Temple survived the fire of 1943 along with the Niomon Gate. Sanmon Gate is said to have been built on the orders of the 3rd Muromachi Era Shogun, Yoshimitsu Ashikaga. Leading up to the Sanmon Gate is a great stony valley, with a huge wooden platform, and where the first of the groups of stone Buddhas reside in a cave visible from the floor.

The Niomon can only be reached by walking up to the temple or by taking the chairlift up and walking down. Along with the sanmon it dates back to the early days of the temple though it was repaired in the 18th century. It was not destroyed by the fire of 1943. The stone nio are unusual and are done in the style of the Kunisaki Peninsula. Well worth a visit, especially in the fall for the fantastic autumn foliage. 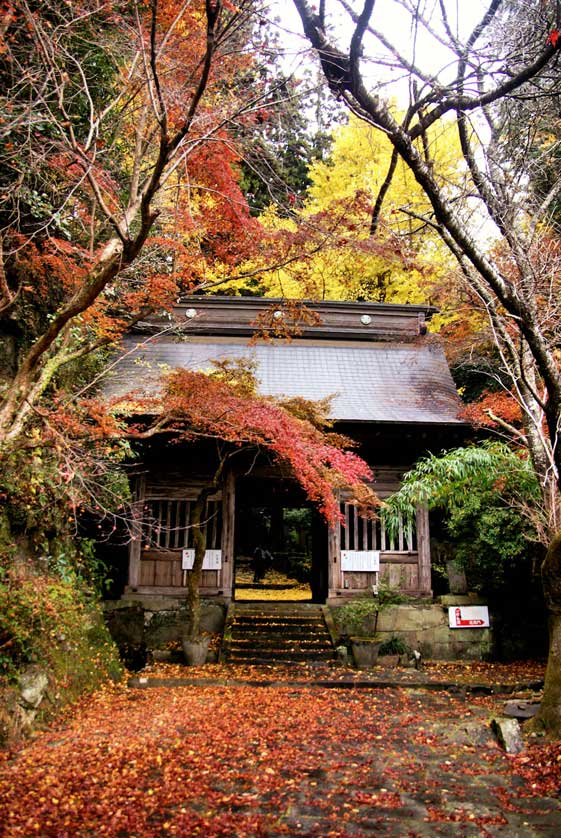 From the Sanmon Gate it is a short walk to Rakanji Temple itself, just past the Go-Hyaku Rakan (Five Hundred Arhats), a crowd of stone Buddhas in a cave, representing the semi-saints after which Rakanji is named.

You will also see thousands of wooden rice scoops bearing votive messages, attached to the fence around the stone Buddhas, beseeching them for various things, from traffic safety to success in love.

Rakanji Temple itself is an architectural delight, both grandiose and delicate, intimately occupying a huge shallow section of a cave, whose inner depths can be entered for a fee, giving you access to the inside of Rakanji Temple. You can climb to the second floor balcony of Rakanji Temple for a good view of the surrounds.

The best view, however, of the area is at the top of the mountain, another steep climb, or the second leg of the chairlift ride. There is a viewing platform, set in a picturesque park, on the summit that affords a spectacular panorama of the mountainous terrain. 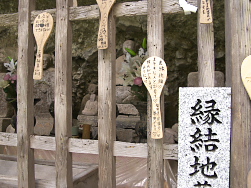 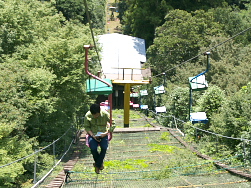 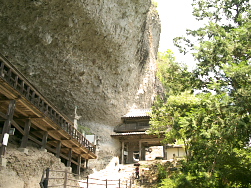 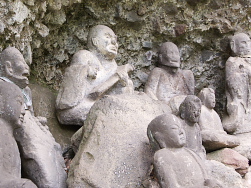 From Nakatsu, take Route 212 heading for the Yabakei Gorge. Go through the Aonodomon Tunnel, and turn right at the first traffic light you come to, onto Route 500. Drive another 1.7km (a mile and a bit) and turn left onto Route 884, and you will see the cliff towering above you.

Oita Kotsu Ltd. operates a regular sightseeing bus on its Yabakei Meguri (Yabakei Route) on Sundays and public holidays, but every day during October and November. (Closed Dec 28 - Jan 4.) It can be boarded from the Oita, Beppu and Nakatsu railway station stops.
Departing from and returning to Oita costs 5,600 yen, progressively down to 3,400 yen if departing from and returning to Nakatsu. The fare is about half-price for children.