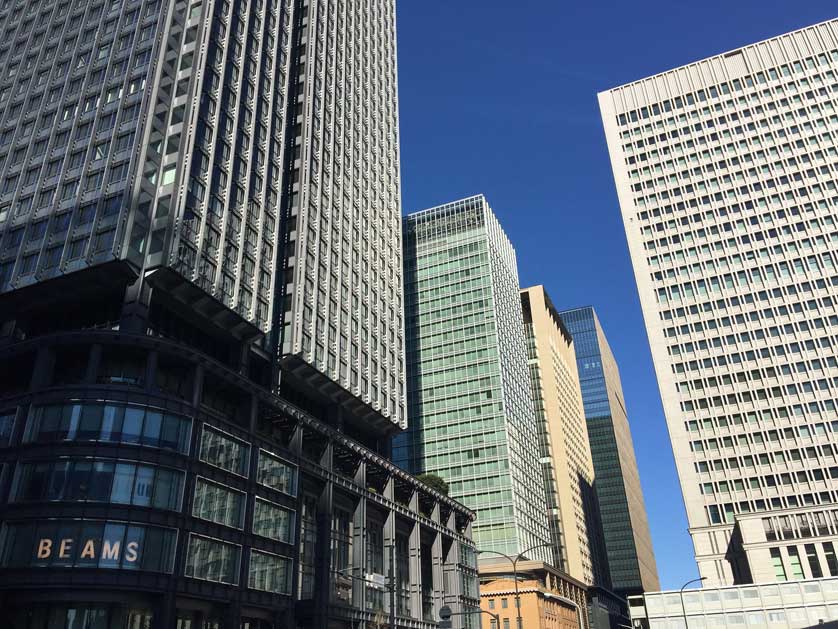 Marunouchi, Yaesu, and Nihonbashi are the three areas immediately around Tokyo Station.

Marunouchi lies between the Imperial Palace and Tokyo Station and was once located within the outer moats of Edo Castle - hence the name maru-no-uchi, literally "within the circle" or bailey.

Marunouchi, especially, to the west of Tokyo Station, is a proud, towering concentration of the headquarters of the richest and most powerful corporations in Japan. 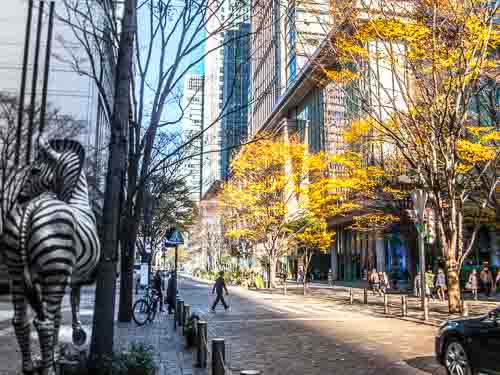 A beautiful way to start seeing Marunouchi is to stroll down the tasteful Marunouchi Naka-dori Avenue. This tree-lined street is the showcase of the Tokyo Station area and is lined with chic cafes, restaurants and designer clothes stores. It is closed to traffic at 11am-3pm weekdays, 11am-5pm weekends, when it is called "Urban Terrace."

Marunouchi Naka-dori has numerous flagship fashion stores and some international class art work along its sidewalks including pieces on loan from the Hakone Open Air Museum.

The Tourist Information Center, JNTO is on Naka-dori, on the ground floor of the Shin-Tokyo Building and just a little along from the Burberry store where Naka-dori and Route 406 meet. English-speaking staff and English-language information is on hand for the visitor, as well as free internet and Wi-Fi. Look for the cows out front.
Japan National Tourism Organization Tourist Information Center
1st Fl, Shin-Tokyo Bldg.,
3-3-1, Marunouchi, Chiyoda-ku,
Tokyo , 100-0005
Tel. 03 3201 3331
Hours: 9 am - 5 pm daily except Jan. 1

Another five minutes walk west brings you to the outskirts of the Imperial Palace with its impressive stone walls, the wide Babasaki moat and Nijubashi Bridge. 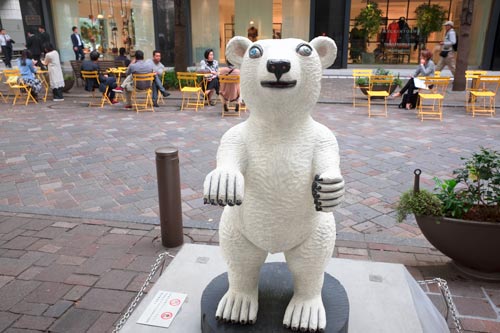 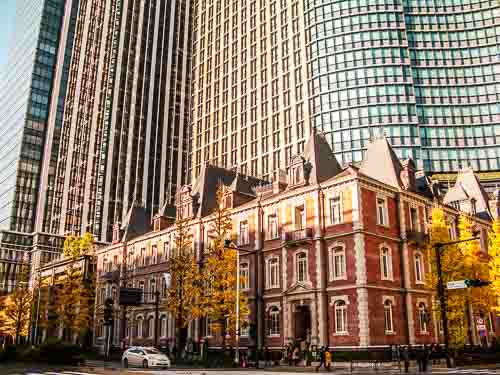 Brick Square is a freely accessible space partly enclosed by the Mitsubishi Ichigokan Museum building. It has a pleasant English-style garden with water features, outdoor seating, cafes and some statuary, including a Henry Moore. Brick Square is a tranquil, stylish spot to relax and chat in a garden environment. Its main domed entrance is on Naka-dori where it meets Route 406. 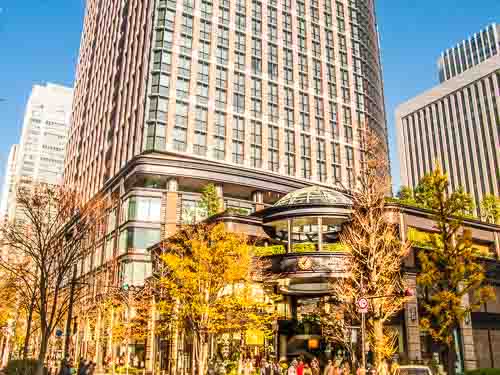 The name Oazo comes from the Esperanto word for "oasis," the Oazo complex comprises four new buildings and one existing one. It was built on the 24,000 square meter site that was the site of the headquarters of the now defunct Japan National Railways (now privatized as 'JR'). The main tenant is Maruzen Company, one of Japan's major book retailers and the above mentioned Marunouchi Hotel. 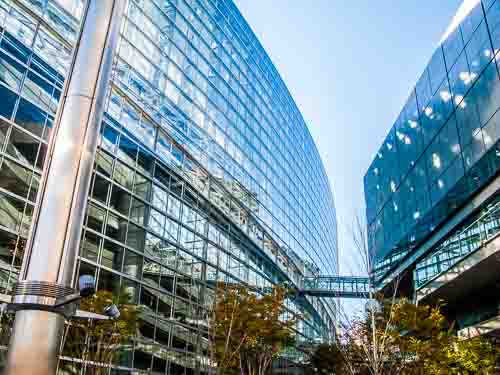 Other places of interest in the Marunouchi area of Tokyo include the Tokyo International Forum, a convention center, concert venue and exhibition space, and Tokia in the Tokyo Building thronged with cafes and restaurants in its basement and first two floors catering to the many office workers in the area.

The grand old Imperial Theater (Teikoku Gekijo, in Japanese) is opposite the Imperial Palace and its moats. It was the first Western-style theatre in Japan, first built in 1911 on the present site. Its current form is its third, dating from 1966. The Imperial Theater stages both Japanese and Western productions and is a traditional big-theater venue.

The Idemitsu Museum of Arts is in the same building as the Imperial Theatre and showcases revolving exhibitions of its huge collection of Japanese art from the Jomon Period to the present day, including Edo era byobu (folding screens), ukiyo-e, calligraphy and ceramics. The basement of the same building includes a number of good cafes and restaurants.

The Marunouchi and Yaesu districts of Tokyo make for a perfect base for any stay in the Japanese capital. Close to Tokyo Station and within easy walking distance of the parks at the Imperial Palace and Hibiya Gardens (Hibiya Koen), Marunouchi and Yaesu offer museums, plus excellent shopping and up-market restaurants.

Recommended hotels in Marunouchi include the Marunouchi Hotel in the Oaza Building, the Metropolitan Hotel Marunouchi, very close to Tokyo Station and the deluxe Shangri-la Hotel. The luxury Peninsula Hotel has views onto the elegant Naka-dori shopping street, and the historic and opulent Imperial Hotel Tokyo overlooks Hibiya Park.

In Yaesu the Hotel Ryumeikan is located in a 15 storey tower with great views while the Pearl Hotel Yaesu is popular with both Japanese and foreign guests. The Four Seasons Hotel Tokyo at Marunouchi is convenient for Tokyo International Forum.

Yaesu is on the other side of Tokyo Station. Big broad Yaesu-dori Avenue extends east from the station, intersecting with Chuo-dori and then Showa-dori. Check out the Bells of Peace, just before the intersection with Chuo-dori, that chime on the hour. While still home to much opulence, Yaesu is on a decidedly more human scale than Marunouchi. Among the many office buildings, it has numerous bookstores and several art galleries. Don't miss a walk down the most picturesque and bustling street in Yaesu, Sakura-dori Avenue which, as the name suggests, is overhung all the way down with sakura (cherry blossom) trees. Sakura-dori is four streets north of, and parallel to, Yaesu-dori Avenue.

Turn left up Chuo-dori and in less than 5 minutes you are in the Nihonbashi area. The 20-story Coredo Nihonbashi is the star here, built on the site of the former Tokyu Department store in 2004, it also houses Merrill Lynch offices and Waseda University's Nihonbashi campus. The opening resulted in the neighboring Takashimaya and Mitsukoshi department stores having to refurbish their Nihonbashi branches.

Turn right down Chuo-dori and in about 10 minutes you are in Tokyo's ultimate luxury shopping area, Ginza. 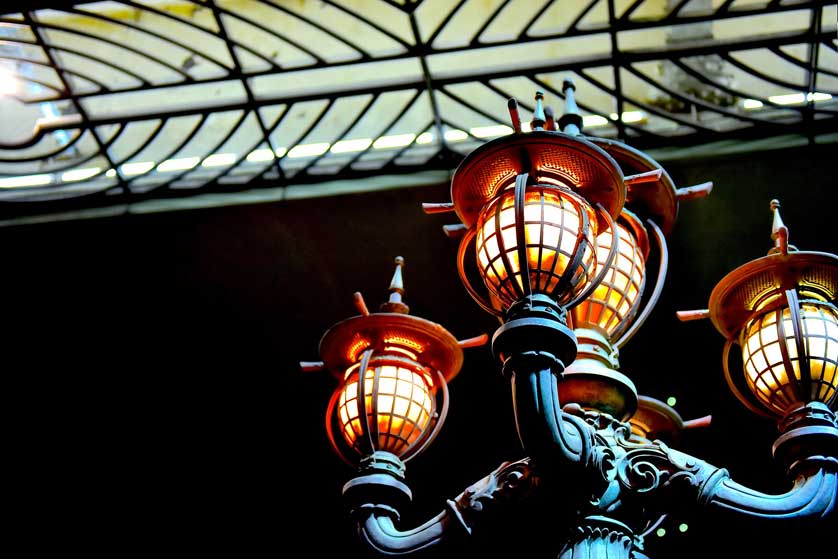 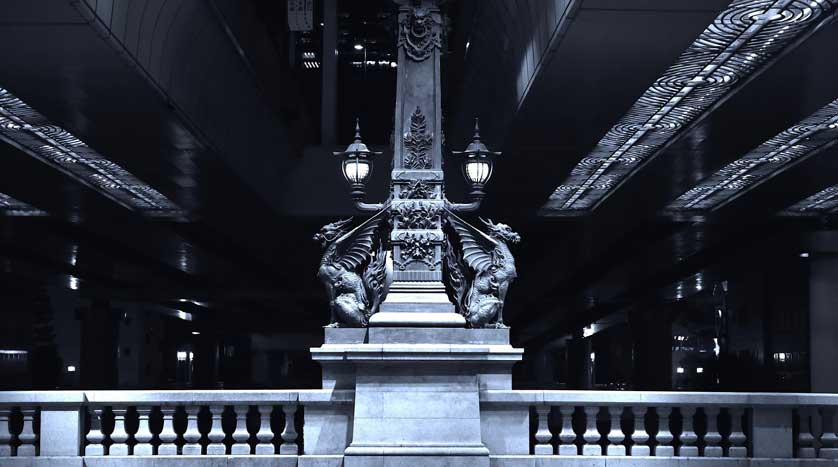 Sky Bus tours of Tokyo begin from the nearby Mitsubishi Building and you can walk in and easily book a bus tour of Tokyo of your choice on one of the company's open-top double-decker buses. 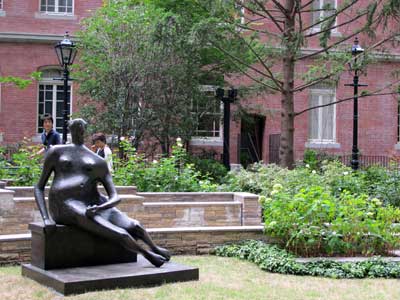 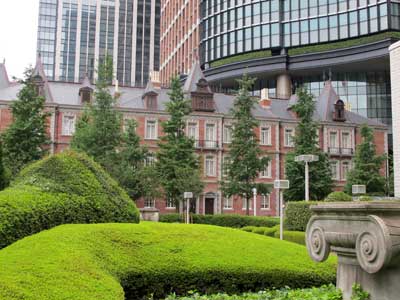 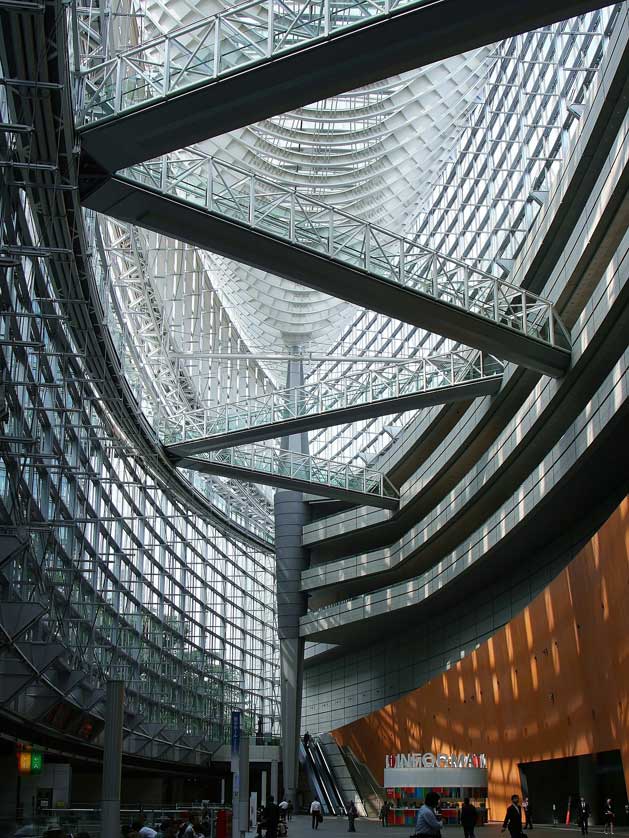 The atrium of the Tokyo International Forum