The Showa Emperor ascended to the throne in 1926 and was emperor until his death in 1989. This period in Japanese history is marked by dramatic and convulsive change as Japan embarked on the road to militarism and imperialism in the 1930's, a world war during the 1940's that only ended with the dropping of atomic bombs on both Hiroshima and Nagasaki, followed by a period of peace and rapid economic growth as Japan rose to be the world's second largest economy by the time of Showa's death.

Hirohito (裕仁) began his reign as a "living god" in the minds of his subjects but successfully reinvented himself as a benevolent, humble marine biologist after the defeat of Japanese militarism in 1945. 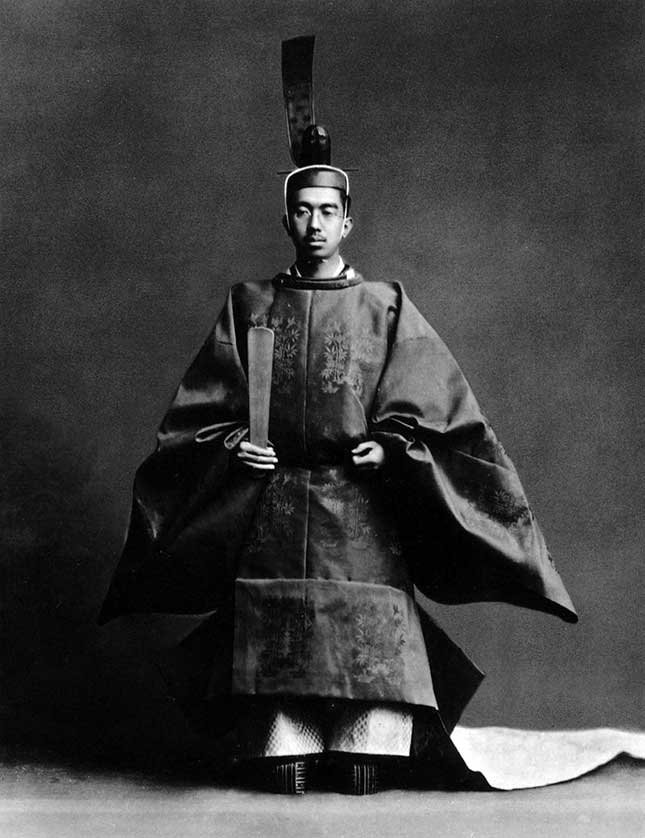 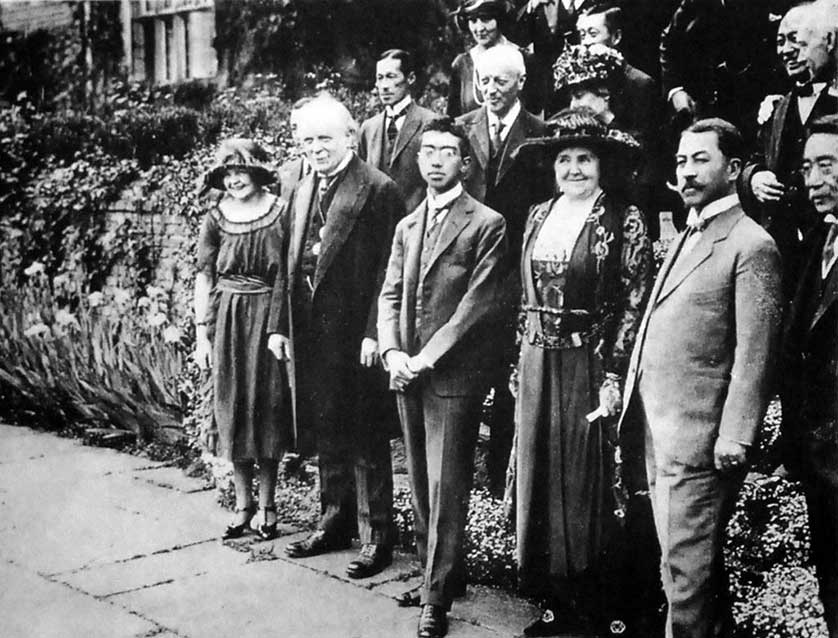 Prince Hirohito and the British Prime Minister Lloyd George in 1921

Born in Tokyo in the Aoyama Palace during the reign of his grandfather Emperor Meiji in 1901, Hirohito was the first son of the future Emperor Taisho and Empress Sadako.

Hirohito was raised by guardians and educated at the exclusive Gakushuin Peers' School. At age 19 he was formally given commissions in both the army and navy and in official photographs he is usually seen in military uniform. An exception was in 1921, when the young Hirohito took a six month tour of Europe including the UK, Italy, France, Belgium and the Netherlands. He would later describe this period as one of the happiest of his life, as he was able to escape the stiff etiquette of the Japanese imperial household.

The early 1920's were marked by a number of events that were to shape the future of Hirohito's life. These included the Washington Naval Treaty in 1922, which sought to limit the expansion of naval forces among the powers of the day, including Japan, the Great Kanto Earthquake of 1923 and a failed assassination attempt by a young communist sympathizer on Hirohito in what was known as the Toranomon Incident in 1923. 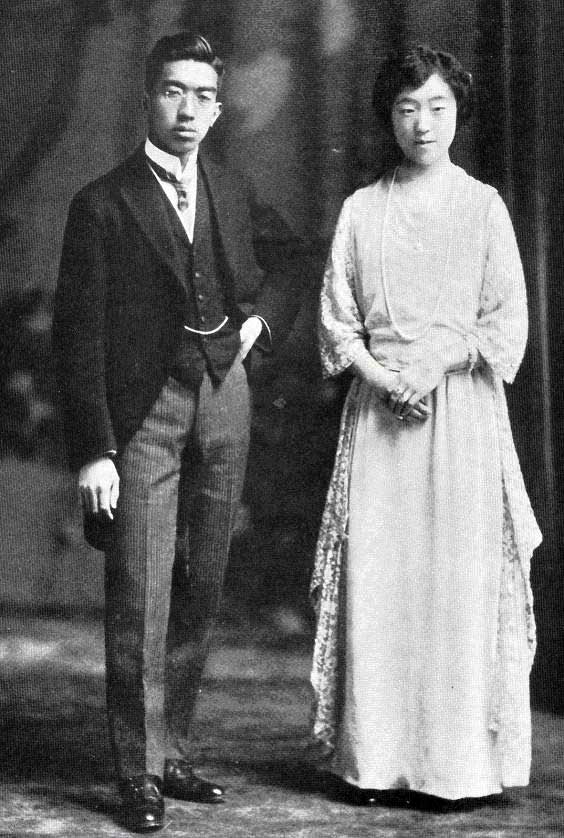 Prince Hirohito and Princess Nagako in 1924

In 1924 Hirohito married his distant cousin Princess Nagako Kuni (Empress Kojun 1903-2000). They had been betrothed at a very young age. The couple were to go on to have two sons and five daughters. At the time of writing in 2017, their first son is the present Emperor Akihito.

Hirohito ascended the Chrysanthemum Throne in 1926 on the death of his father, who had become increasingly mentally unstable in later life. The late 1920's and early 1930's were a time of increasing financial instability and political turmoil. Hirohito survived another botched assassination attempt in 1932 (Sakuradamon Incident), this time by a Korean nationalist opposed to Japan's occupation of Korea. This was also a time of several, notable domestic assassinations of moderate Japanese politicians by ultra-nationalists. The most notable of which was the 1932 murder of Prime Minister Inukai Tsuyoshi in 1932, which ended civilian control of the military. Dark clouds were gathering and Hirohito was soon to be at the center of the storm.

The February 26 Incident of 1936 saw an armed revolt by junior army officers in Tokyo who killed several government ministers and high-ranking military officers. The Emperor vehemently opposed the uprising and ordered his generals to quash the rebellion. Without imperial support the revolt was crushed, the ring leaders arrested and many of them executed.

The War in China and World War II

Japan had already been in open conflict with Chinese forces since 1931 but the war intensified from 1933 on. Hirohito did not oppose the war in China. When his generals began preparations for a war with the US and Britain, Hirohito was initially opposed but appears to have been swayed to favor an attack in the Pacific.

Japan attacked the USA and Britain simultaneously in December 1941, thus drawing the US into the wider war with Nazi Germany. The Japanese Navy carried out a successful, surprise air raid on the American naval base at Pearl Harbor in Hawaii, destroying part of the American fleet. Shanghai, Hong Kong, the Philippines, the Dutch East Indies, Malaya, Burma and Singapore were all to fall to rapidly advancing and highly trained and motivated Japanese forces.

As the war began to turn in favor of the Americans, Hirohito urged his generals and admirals on to greater efforts. However, by 1945 the situation appeared hopeless and with the entry of the Soviet Union into the war against Japan and the atomic bombings of Hiroshima and Nagasaki, Hirohito decided to accept the Potsdam Declaration and recorded a speech which was delivered in formal, archaic Japanese on August 14. The monarch asked his subjects to "Accept the unacceptable" and surrendered Japan to the Allies unconditionally. 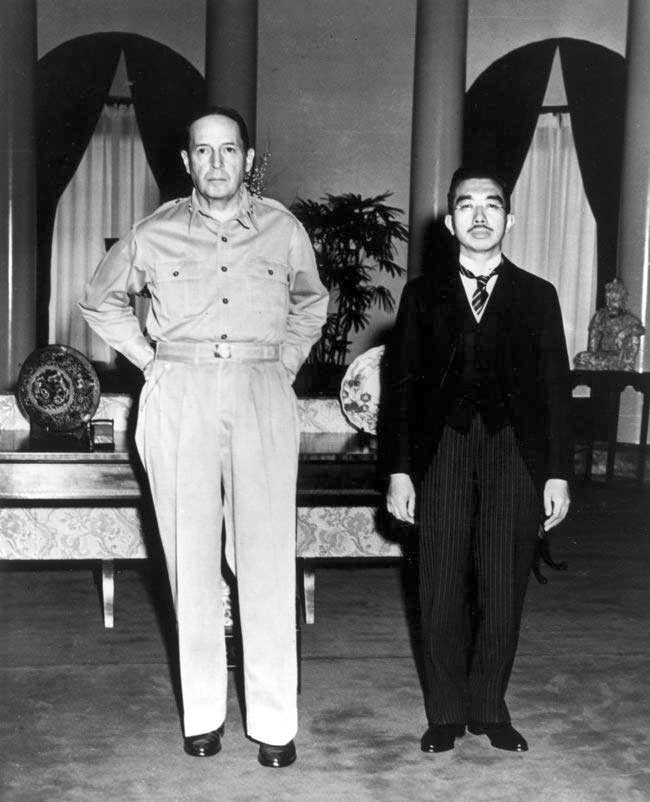 To ease the occupation and pacification of Japan after its surrender, Emperor Hirohito was allowed to continue on the throne as a symbol of continuity, despite demands from some among the Allies for him to be tried for war crimes. Hirohito was forced by the General MacArthur, Supreme Commander of the Allied Powers, to relinquish any claim to being a living god and to stress his position instead as "the symbol of the State and of the unity of the people." It is doubtful whether Hirohito, personally, however, ever rejected the idea that the Japanese imperial line was divine.

To raise moral among his defeated subjects, Hirohito began to be seen more in public and in the 1970's even traveled overseas on state visits to the UK in 1971 and the USA in 1975 where he met with Queen Elizabeth II and President Ford.

Back in Japan, he spent much of his later life engaged in research in the field of marine biology and a personal laboratory was constructed within the Imperial Palace in Tokyo for this purpose. 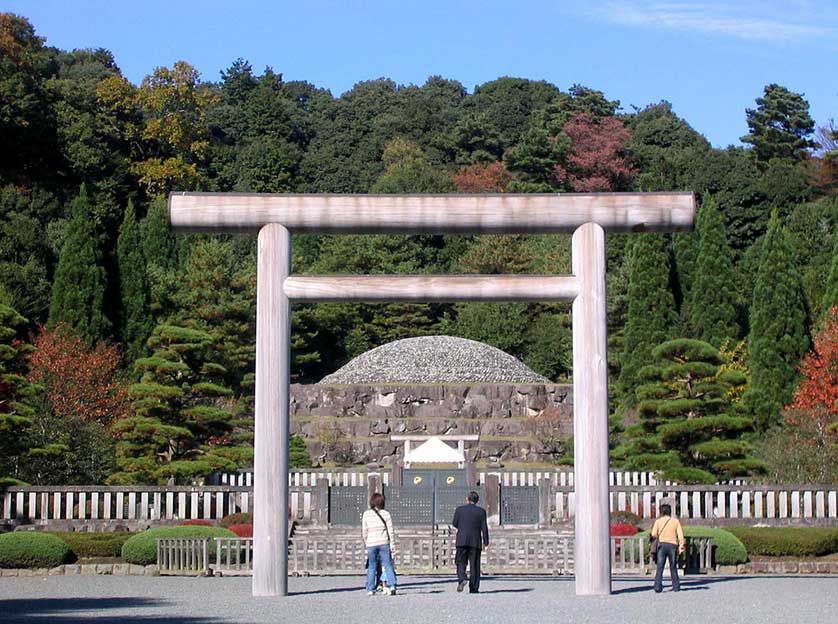 After such a long and tumultuous reign that had seen Japan wage and lose a war against much of the world, the country devastated by atomic and conventional bombing, then reborn and rehabilitated from the ashes to become a world economic superpower, symbolized by Tokyo's hosting of the 1964 Olympic Games, it came as a huge shock to the nation when Hirohito died of duodenal cancer in 1989. His death forced the nation to confront its past during the Showa era as world leaders flew into Tokyo for the state funeral. The Showa Emperor was buried in the Musashi Imperial Graveyard in Hachioji.

In the decades following the Emperor Showa's death his legacy and the question of his complicity in war crimes has been debated by historians. Since Emperor Hirohito's death in 1989 much evidence has surfaced concerning his involvement and responsibility for World War II, and his subsequent avoidance of any culpability for it. Herbert Bix's Hirohito and the Making of Modern Japan is probably the best known book on the subject. The Yamato Dynasty: The secret history of Japan's imperial family by Sterling Seagrave and Peggy Seagrave goes further, examining the Imperial family's involvement in war crimes, and the depth of the American program to cover it up. Norma Field's In the Realm of a Dying Emperor: Japan at Century's End traces three dissenting voices to the increasingly right-wing direction Japan was taking. Emperor Hirohito and Showa Japan by Stephen S. Large is another book addressing the legacy of Hirohito and the forces that shaped his world view.

Hirohito's birthday is celebrated in Japan on April 29 every year on a national holiday called Showa Day. 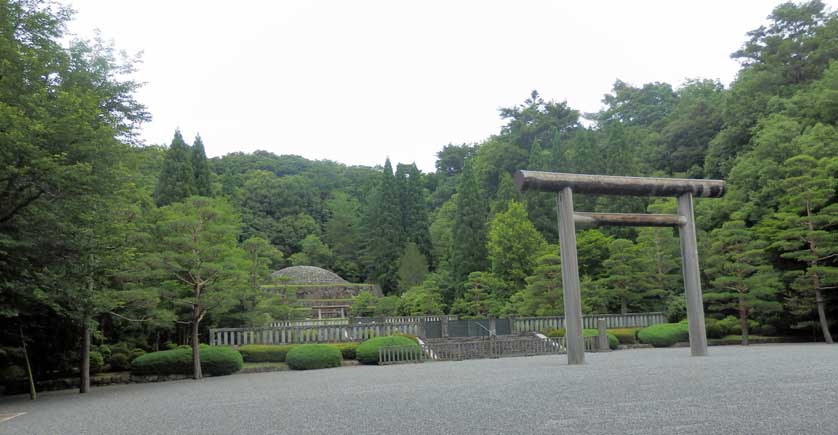 Grave of Emperor Showa (died in 1989) at the Musashi Imperial Graveyard, Hachioji, Tokyo

Emperor Hirohito (1901-1989), aka Showa Emperor; Showa Tenno, is a deeply controversial and divisive figure in Japanese history. Hirohito was emperor of Japan during its darkest hours during World War II and also symbol of the nation during its post-war boom.