"You Only Drink Rice": The Secret of Good Sake 日本酒 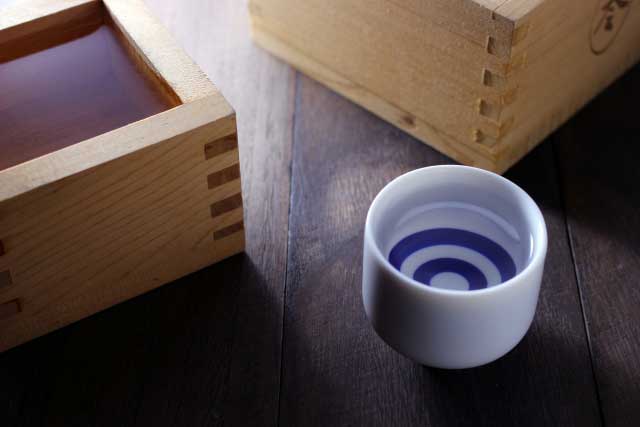 Sake (日本酒) has an almost spiritual significance in Japan

If you've seen "You Only Live Twice," the only James Bond movie set in Japan, you probably remember the following scene:

Tiger Tanaka, the head of Japanese intelligence, asks James, "Do you like Japanese sake, Mr. Bond? Or would you prefer a vodka martini?"

Err, right, Mr. Bond. You may be an international man of mystery, but when it comes to sake, you're obviously a philistine. 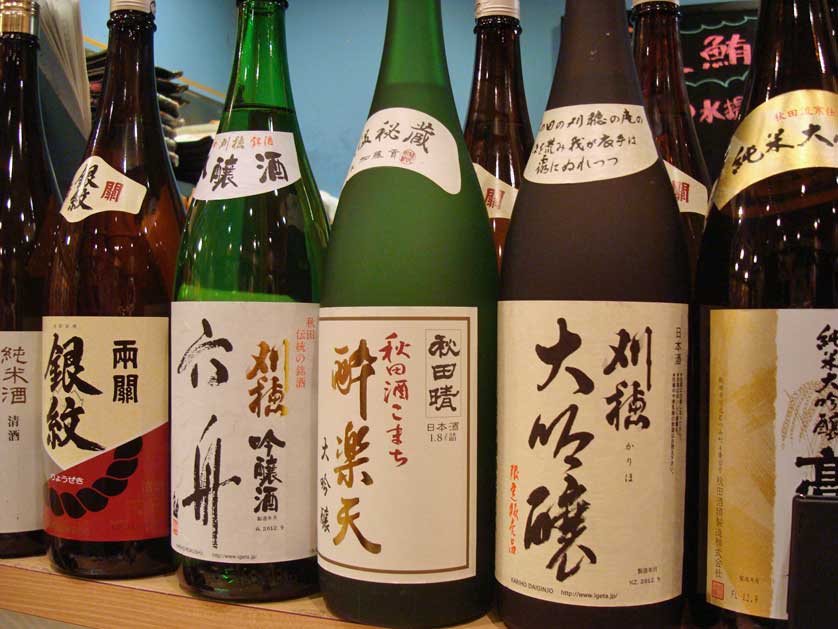 Sake from Akita has a good reputation throughout Japan 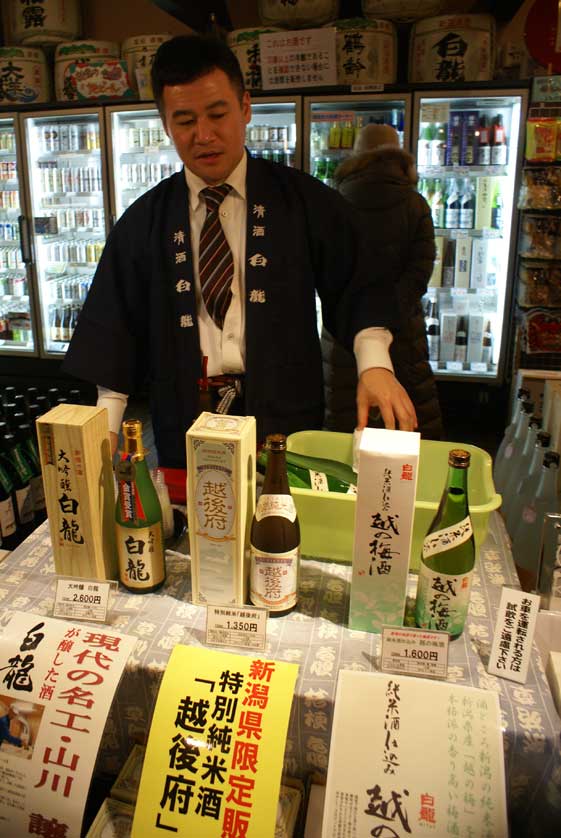 There is an amazing variety of sake at Ponshu-kan in Niigata.

The fact is, sake - more properly called nihonshu - can be served at a range of temperatures. The true connoisseurs, however, tend to favor it being on the cool side. Many brands are said taste best at around room temperature, say around 20 degrees Celsius. Others should be chilled to around 10 degrees.

On the other hand, don't succumb to a Bondian backlash and over-chill your sake. Near-freezing nihonshu numbs the palate, and hence your ability to appreciate the elixir's subtler flavors.

As for our secret agent's piping-hot sake, the Japanese have long associated that with low-grade stuff. Heating, it's commonly believed, is a way of masking the impurities commonly found in cheap sake. 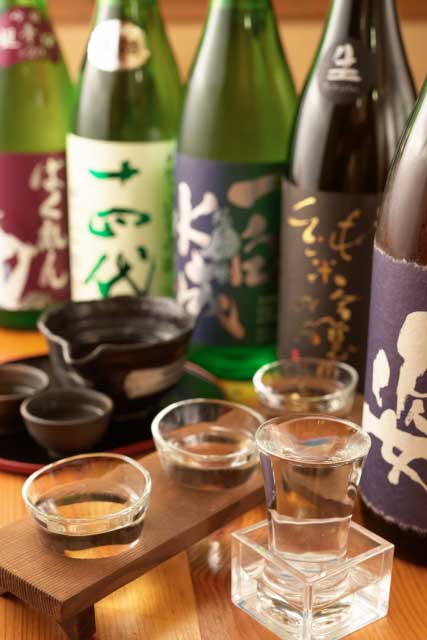 What exactly is "cheap sake"? In Japanese, it's called futsuu (meaning, somewhat euphemistically, "regular") and about two-thirds of all nihonshu sold in Japan is of this grade. So when you go to a typical izakaya, yakitori joint or shot bar and holler out "Nihonshu!" to the waiter, expect to be served this low-grade category of brew.

The other third is the good stuff, called tokutei ("special").

What's the difference? Mainly, that futsuu contains more impurities than tokutei. The other major factors determining quality are the type of rice grains used in the brewing and the extent to which the grains are polished. What does polishing have to do with it?

The husk, or outer part of the rice grain, contains those nasty impurities. So as you grind away the husk and move toward the kernel, the impurities become fewer and fewer, until you hit pure starch. For the sake brewer, this substance is manna, and it's what top-quality sake is primarily made from.

Another distinction to know is that when futsuu sake is brewed, large amounts of distilled alcohol are added, whereas tokutei contains only small amounts of added alcohol or none at all. Purists often prefer junmai, a type of tokutei made from nothing but rice.

The challenge from shochu

If you're from one of the many Western countries where sake is trendy, you may be surprised to learn that its popularity seems to be on the wane in the country of its birth. Much of the blame goes to shochu, a powerful vodka-like drink usually made from a variety of possible sources, mainly barley, sweet potato or sometimes rice, which is nudging sake aside on the menus of bars and pubs throughout the country.

"The Japanese have drunk nihonshu from way back, but nowadays they're mainly going for shochu," says the manager of Miyagawa, a yakitori joint in the Tokyo district of Koenji. His rustic little restaurant does have sake on the menu, including a cocktail with limejuice which, for some reason, he calls a Samurai, though he says that his customers rarely order sake in any of its forms.

Bar Secret Base Zero, a few blocks away in the same Koenji district, is another case in point. The cozy establishment offers a vast array of booze, most of it exotic, along with a staggering selection of shochu brands. "But we've only got one type of nihonshu," confesses the bartender. "It's simply too expensive to keep and store for the amount of demand it receives." 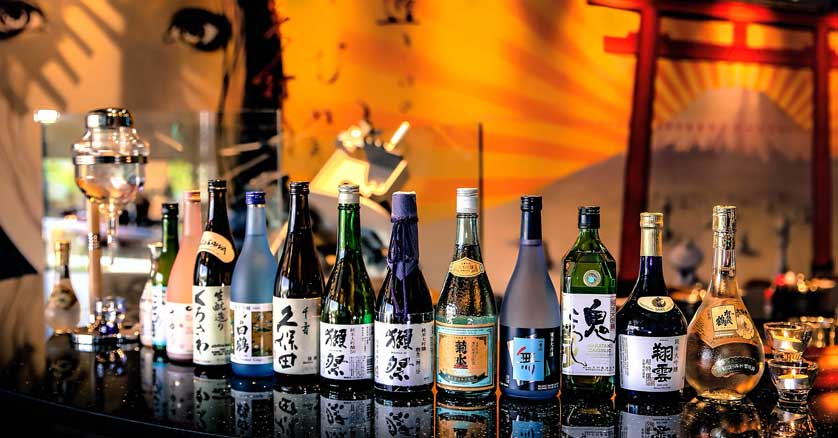 So where can you go to find a decent selection of tokutei sake in Japan? That's not an easy question to answer, believe it not. The best and most obvious choice is sake specialty bars, but such places are getting increasingly difficult to find, particularly outside the big-city nightlife areas.

A high-class sushi restaurant is your best bet. Make sure you say "tokutei" when ordering to ensure you're getting quality. If you want it chilled, say reishu (literally meaning "cold sake"), and if you want it Bond-style, ask for atsukan ("hot sake").

Another scourge of the shochu boom for sake-lovers who aren't Japanese is simply trying to identify nihonshu. That's because many shochu brands look identical to sake once they're bottled being contained in tall brown bottles with colorful and elaborately written labels.

Only a perusal of the labels and knowledge of kanji can reveal the content's true identity. Sake alone will be described as "seishu" (清酒) or "nihonshu" (日本酒).

Another frustration is the growing number of traditional Japanese bars and pubs with signs bearing the tantalizing expression chishu (地酒). This literally means "regional alcohol." Yet with the shochu boom in full swing, this message really means, "All the shochu you could ever want, with a teensie-weensie selection of sake or microbrewery beer - if you're lucky!"

Perhaps the best place on the planet to sample top-quality sake is inside Echigo-Yuzawa Station in Niigata Prefecture, a region on the west coast of Honshu (almost directly west of Tokyo) famous for its sake production.

The station contains a museum-like corner where dozens of brands of locally brewed sake can be sampled. Five hundred yen gets you a choko (small sake cup) and five tokens, each of which is exchanged for a dram of any sake of your choice.

Japanese sake. Sake is Japan's most famous variety of native alcohol. However, it is losing out in popularity to shochu. Learn how and where to find the best sake and how to drink it.