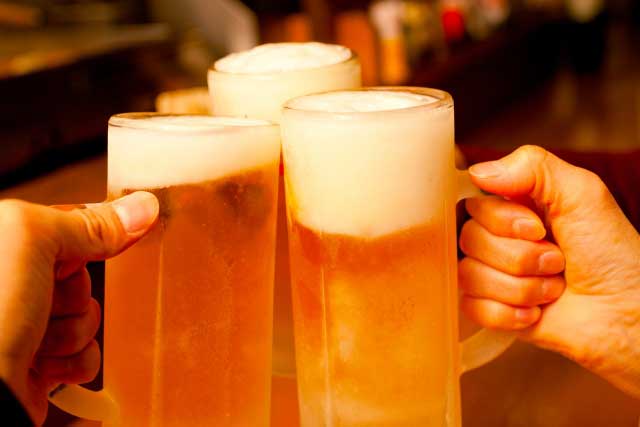 The good news for visitors fond of their booze: Japan is pretty much a drinker's paradise and always has been, it seems.

As far back as the 3rd century, Chinese historians dutifully recorded the fact that the people of Yamatai - ancient Japan - were unusually partial to a tipple. Excessive drinking, singing and dancing, even at funerals was all the rage. Today, alcohol is an important and accepted part of Japanese daily life, from social and business drinking to religious rites and traditional customs where sake plays a central role.

The bad news is that sake and the local brews, which contain a stiff dose of cornstarch, can leave the over- indulger with a staggering, unforgettable hangover.

Beer is without doubt the king of Japanese drinks, knocked back on a grand scale by everyone: men and women, young and old, sporty and slob alike. Despite the emergence of a number of microbreweries and local real ales, the big breweries with an almost indistinguishable product predominate. 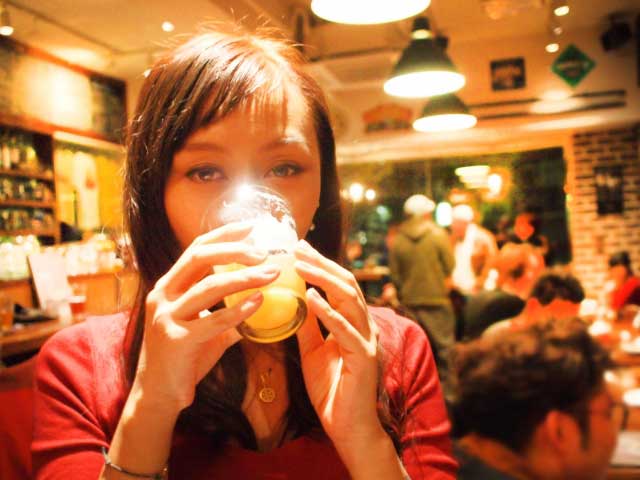 Then there is whisky, generally the local distillations that are mostly drunk with water; and the stock salaryman hole in the wall, with each customer's bottle-keep, deals in nothing but. It is however, as elsewhere, a man's drink - an older man's.

Women are more likely to go for wine, clear spirits (shochu or chuhai), or to stick with the beer. Tastes are liberalizing, however. Wine has lost it pretentiously 'foreign' image and imported bottles of decent quality can now be found almost anywhere. Cocktail bars are no longer rare outside hotels. According to Euromonitor Japanese adults on average drink 4.4 shots of hard liquor per week, the fifth highest in the world behind top two South Korea and Russia. This is mostly shochu followed by whisky.

The drink most popularly associated with Japan: sake, is very much there in the advertising and on sale, but it is but a pale stream in the shadow of the beer and whisky. Drunk usually cold in summer and hot in winter, 'rice wine' slides down the throat with ease and should be handled with care. It is, perhaps predictably, largely the domain of the older set: the late middle-aged to the retired.

For binge-drinkers, the emphasis is on ikkinomi - 'down-in-one' - a game played by the young to commemorate occasions such as joining university, starting a new job or at blind-date parties. Despite a high consumption of alcohol - around 100 liters a year each, comfortably putting the Ultras Nippon mid-table in a Premier League of 10 nations - many Japanese are unable to drink too much (many lack the necessary enzyme to break down alcohol and turn a frightening shade of crimson) and while the lucky simply fall asleep, ikkinomi has had some famous, fatal consequences with participants, at the encouragement of their friends, literally drinking themselves to death.

Young people are more likely to get raucous and sick than actually croak though, and any drunken violence - still relatively rare - will probably be theirs. The main danger you may face are the ubiquitous 'street pizzas', served up warm and fresh by sloshed salarymen, as you make your way around town.

Mutuality is the underpinning of Japanese drinking culture. It comes across in the general tolerance for the excesses it spawns, but more directly in the practice of pouring your drinking partner's drinks for him or her.

Most drinking is done from small glasses decanted from bottles or cans. Never pour your own! In the eyes of your Japanese companions it will give you about as much bonhomie and charisma as Ebenezer Scrooge.

Everyone at some stage has, by the end of the evening, poured everyone else a drink. It is probably the only ceremony that really deeply matters in Japan, and one that is heralded and acknowledged by all involved with bowing of heads, grunts, groans, brilliant smiles or gales of laughter.

The enthusiasm for the grape and the grain is catered to by round-the-clock availability. Bars open and close as and when they please, and no license is needed to operate one. Should the 'master' shut shop on you before thirst has been quenched, no problem! Known as hashigozake - lit. 'ladder-drinking', the pub crawl can be continued through the night at the countless bars that will still be open. Failing that, licensed 24-hour combini, (convenience-stores) provide sustenance - from cheap sake that borders on meths, to bottles of imported wines - until the first train leaves or the beer-machines spark into life again. Never far away, electronic vending-machines dispense beer and sake (hot or cold) on insertion of a few coins - around US$2.05 for 250 ml - from morning until 23:00, when they automatically switch off, ostensibly to deter those under the legal drinking age of 20. Recently though, except in hotels, it is increasingly difficult to find alcohol vending machines on the street.

This is about as strict as the law and wider society gets when regarding alcohol and its users. The law makes no mention of such a crime as being drunk and disorderly. If anything, inebriation may be taken into account as a mollifying factor if a crime is committed. This legal leniency reflects the general tolerance shown towards those who have overshot their limit. On late nights and very early mornings on any day of the week it can seem as if most of the working population has been at the bottle a bit too long. The legendary salaryman makes a beeline from the office to an izakaya, a pub where people lounge to eat and drink, or a tachinomiya, where the drinking is done standing, then a night-cap at a snack, a pokey smoky velveteen cocoon presided over by the 'mama'.

Visitors to the country often comment on the reek of alcohol and the state of the other passengers on boarding a late night train. Station hands have to help the severely drunk alight and even wheelchairs are used to pour the paralytic into waiting taxis. Come morning and JR (Japan Railways) has been known to issue free tickets home to comatose bullet train passengers left snoring through their stop as, at about midnight, the last train pulls into the terminal station hundreds of miles down the line. Luckier salarymen in higher positions are spared this ignominy by their company, who provide them with vouchers to use for a cab home - a considerable saving in a country where opening a taxi door alone costs around US$6.00. 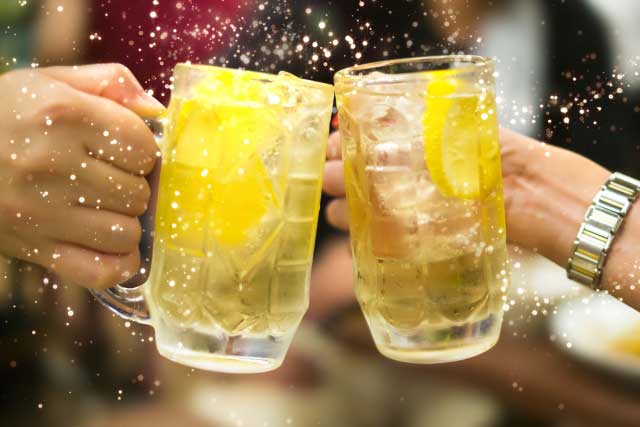 Drinking out can be an expensive business in Japan (see below) but alcohol, due to the relatively low taxes levied on it, remains a cheap proposition when purchased from a liquor store. A bottle of Johnny Walker Red Label whisky will set you back only US$15, Beefeater Gin comes in at US$12, foreign wines start at around US$10 a bottle and the domestic brands are even cheaper with half a liter of Suntory vodka priced at US$6!

'When in the village, do as the villagers' advises a familiar-sounding Japanese proverb. For visitors to Japan, that will probably mean drinking a lot of the lager, which is supplied mainly by the big three, Asahi, Kirin and Sapporo. Sharp, refreshing, with body, and always served chilled, Japanese beer, strong at around 5% alcohol content, generally finds a ready welcome on the typical foreign palate. A pint will cost you in the region of 00 (US$5.00) to 00 (US$7.50), depending on where you go. Imported British and Irish beers are available, but at around US$8.00 for a can of Boddingtons in a Tokyo pub, once emptied, that's an expensive dry glass. Kanpai! Cheers! 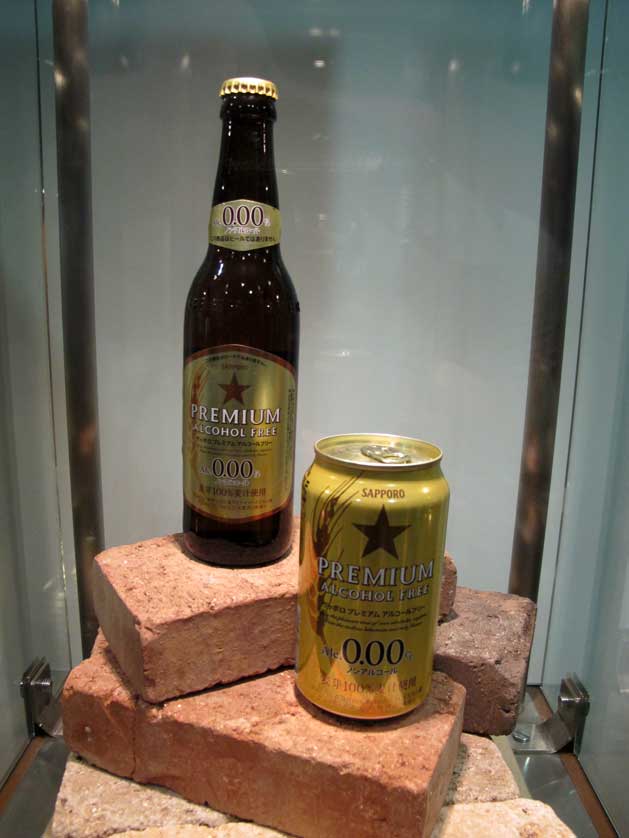 The Japanese are quite rightly renowned for their consumption of copious quantities of alcohol. Here's a brief bilingual guide to Serious Drinking in Japan.

Yopparai (noun)A drunk (ie, a person currently - not necessarily habitually - under the influence).

Uwabami (noun)A serious piss-head (containing the sense of 'one who drinks the scum that floats to the surface').

Saboru (vb)To miss work (for reasons other than stated to employer).

Please note that pissing in public is not only culturally acceptable, it is, at times, de rigeur.

Read an article about the drinking culture in Japan and Japanese people's drinking habits. This covers beer, sake and shochu.