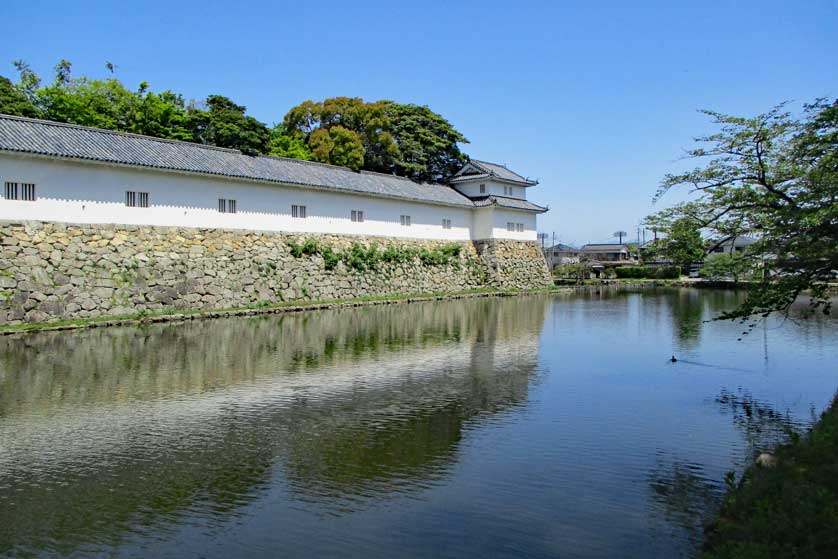 Japan has a large number of castles. Most of them are not original, however.

Throughout the course of Japanese history, many castles have come and gone.

At the beginning of the Edo Period, Tokugawa Ieyasu, in unifying Japan under his rule, ordered "One Fief, One Castle", meaning that many existing castles that put a fief in excess of this quota were lost.

Furthermore, many more were pulled down at the beginning of the Meiji Period at the end of the 19th century, in the rush towards modernization.

Then, others were destroyed in American air raids during World War II, such as Osaka Castle and Nagoya Castle - two of the country's largest fortresses.

See a listing of the dozen existing, original Japanese castles. 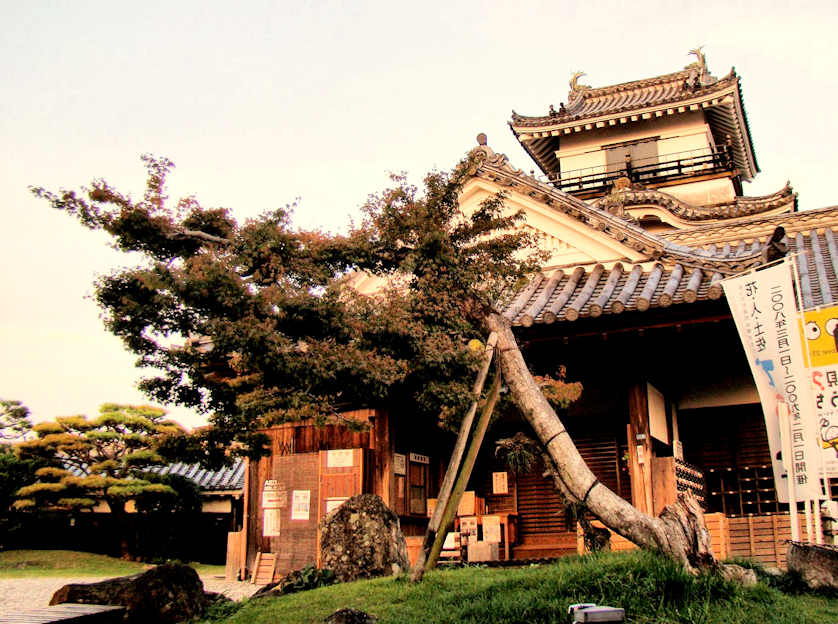 Kochi Castle in Kochi Prefecture in the south of Shikoku, is a completely original castle, one of only twelve of the hundreds of castles still standing in Japan.

The complete inner citadel (honmaru) of Kochi Castle is still intact. First constructed between 1601 and 1611 by Yamauchi Katsutoyo, the feudal lord (daimyo) of Tosa, Kochi Castle burnt down in 1727 and was rebuilt between 1729-1753. The buildings you see today at Kochi Castle date from that time.

The reconstruction of the fortress in Kochi took place in the middle of a period of prolonged peace in Japan so the feudal lord of the day had his living quarters (kaitokukan) situated on the ground floor looking out on to a pleasant garden planted with cherry trees and plum trees.

The 18.5 meter-tall castle tower (donjon) is registered as an "Important Cultural Property" and has three external levels on six floors. On a clear day, there are good views over Kochi town stretching out below.

The Kochi Castle grounds are now known as Kochi Park and contain a number of other attractions. 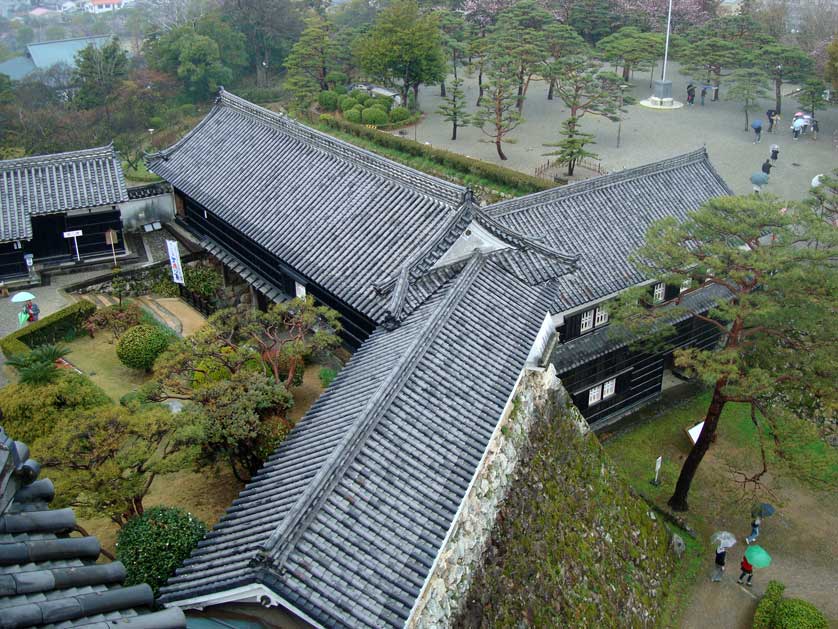 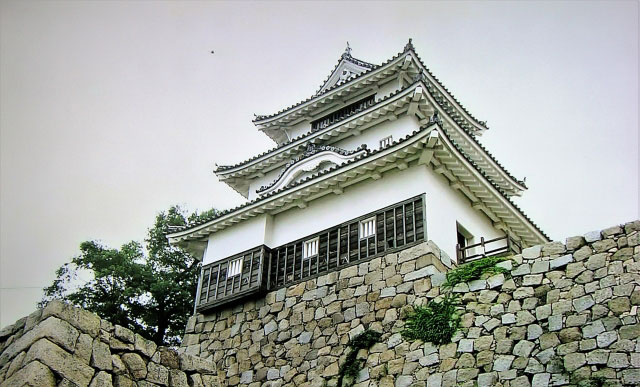 Marugame Castle, west of Takamatsu in Kagawa Prefecture in northern Shikoku, dates from 1597. Marugame Castle has one of only a dozen remaining original keeps (donjon) in Japan.

Perched on a hill south of Marugame town, the most impressive features of Marugame Castle are its huge stone walls rising up to 50m in parts.

The walls of Marugame Castle are known as Ougi no Kobai as they resemble the shape of a folding fan. Incidentally Marugame is known for its production of paper fans.

The pleasant Marugame Castle grounds are now a park with hundreds of cherry trees, a small zoo and a play ground for young children.

The small central tower of Marugame Castle has the usual displays of samurai helmets, photographs of Japan's other fortresses, samurai swords and armor with impressive views over the surrounding countryside and the Inland Sea, the body of water separating Shikoku from Honshu to the north. 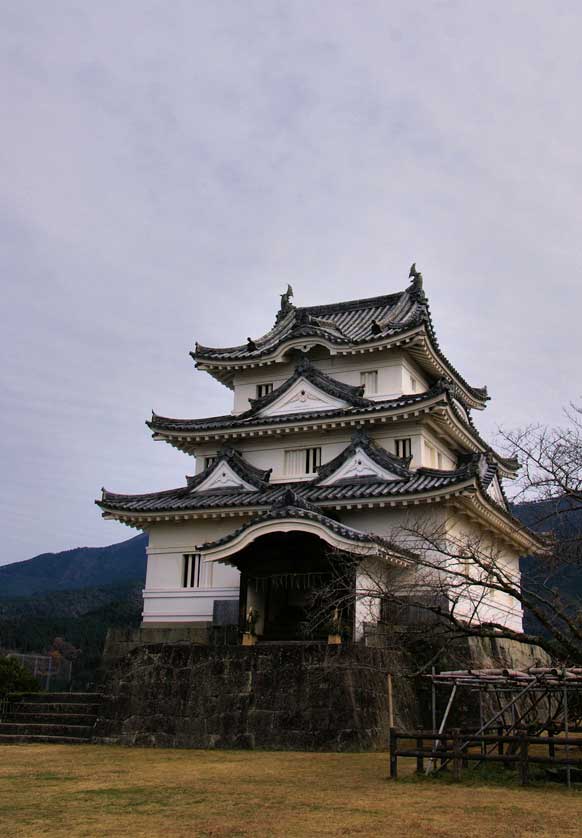 Uwajima Castle is one of the dozen original castles in Japan and is located in Ehime Prefecture on Shikoku Island. Uwajima Castle is classified as a hirayamajiro - castle on a hill on a plain. Uwajima Castle occupies a small hill, that is now a wooded park, in the middle of Uwajima City, very close to the sea.

The castle became known as Uwajima Castle only in 1615, when the daimyo Hidemune Date, the son of the Date feudal lord in Sendai, took up governance of Uwajima domain, the domain being a reward from the first shogun of Japan, Tokugawa Ieyasu, for the Date family's contribution to victory in the Siege of Osaka, which consolidated Ieyasu's power and made him supreme.

One of Todo Takatora's design strategies, still extant, is its five-sided site. The standard castle site in Japan was square, and enemies were postulated to attack on the assumption that a site was square. Such an attack on five-sided Uwajima Castle would be likely to leave a fifth side at least temporarily free, aiding defense. 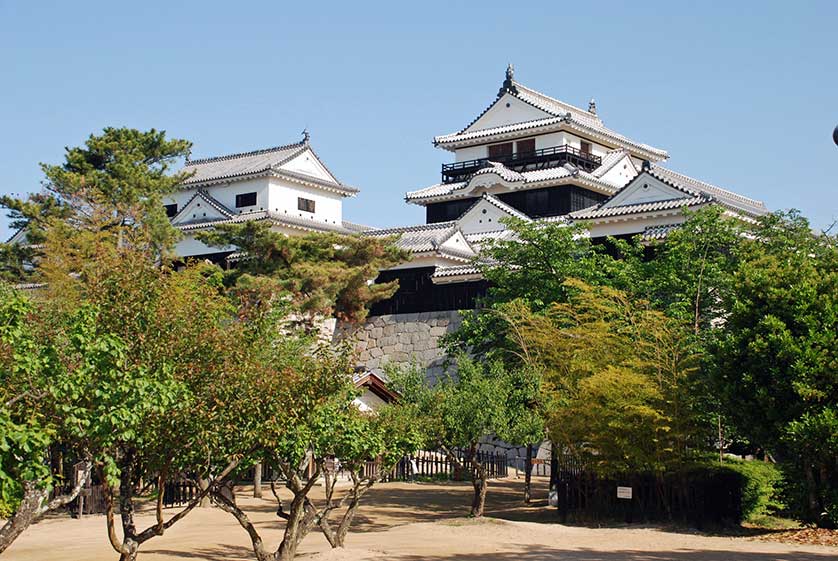 Matsuyama Castle, in Matsuyama in Ehime prefecture, western Shikoku, was first built by Kato Yoshiaki between 1602 and 1627. (It is not to be confused with Bitchu Matsuyama Castle in Okayama Prefecture.)

Matsuyama Castle is one of Japan's twelve originally surviving castles, although it burnt down twice, once in 1642 and again in 1784, after being struck by lightning. The present structures date from 1854.

Iyo Matsuyama Castle is a top a steep hill called in the center of Matsuyama Koen Park, surrounded by the rest of the city. If you don't feel like the climb there is the Matsuyamajō Ropeway which is just a three minute ride to the top of the castle park.

The impressive, three-story central tower (or, donjon, daitenshu) is listed as an Important Cultural Property and has displays of samurai swords, old palanquins and armor inside which belonged to the previous feudal lords (daimyo) of Matsudaira, relatives of the ruling Tokugawa.

There are great views from the donjon over the town below and out to the Inland Sea, separating Shikoku from Honshu to the north.

The pleasant Matsuyama Castle grounds are a popular spot for cherry blossom viewing (hanami) and a good place for a picnic in summer and spring. 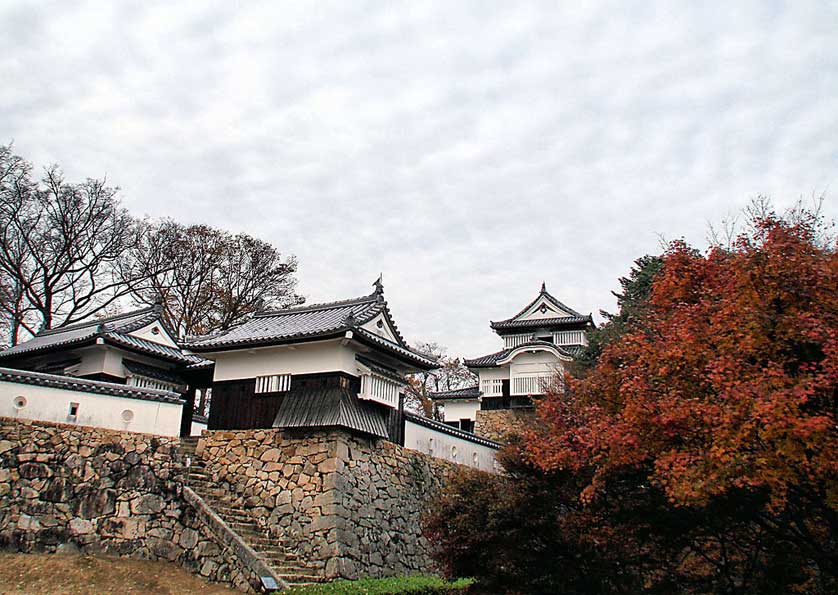 A view of the walls and castle buildings of Bitchu-Matsuyama

Bitchu-Matsuyama Castle, perched on the peak of Mount Gagyu in Takahashi City in Okayama Prefecture, is the highest mountain castle (yamashiro) in Japan at 478 meters (1,400 feet) above sea level.

There has been a fortress in this area since 1240, but the present location of the castle actually dates from 1331, with the current building on the site dating from 1683 when Mizunoya Katsutaka constructed the two-storey keep or tenshu.

After the Meiji Restoration of 1868, Bitchu-Matsuyama Castle was partially destroyed and gradually the entire site fell into disrepair. However, work began in 1921 to restore the castle, and has been periodically carried out since then. So, while much of the castle is original, much of it is also restored.

There are fantastic views of the surrounding Okayama countryside from the keep of Bitchu-Matsuyama Castle. 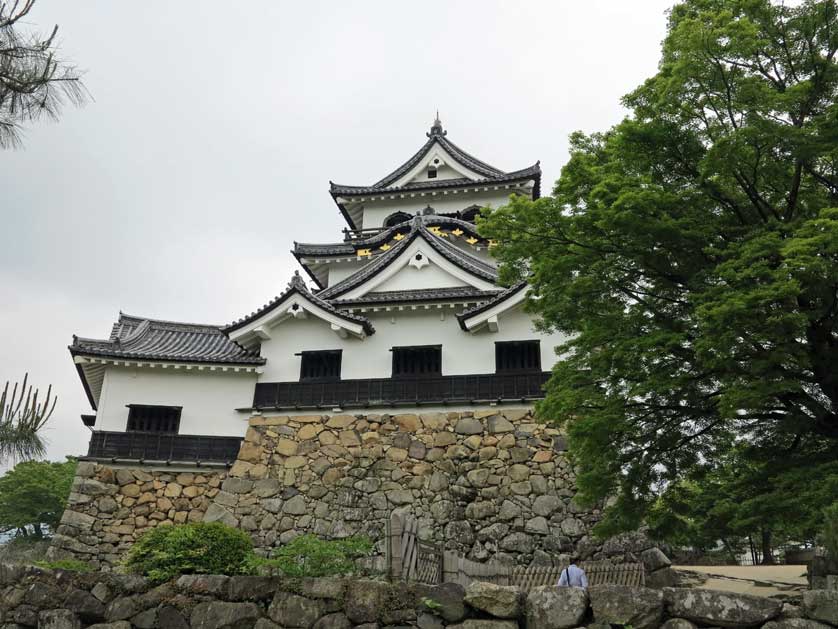 Hikone Castle in Shiga Prefecture in western Japan is one of Japan's most beautiful and historic castles.

Hikone Castle is set on the shores of Japan's largest lake - Biwako - and is an easy day trip from Osaka, Kyoto or Nagoya.

Hikone Castle guarded the approach to Kyoto and was also strategically placed to control traffic on Lake Biwa.

Hikone Castle was completed in 1622 after 20 years in construction using some materials from the nearby Nagahama Castle which was torn down. Hikone Castle was finally finished by Ii Naokatsu, the son of Ii Naomasa. 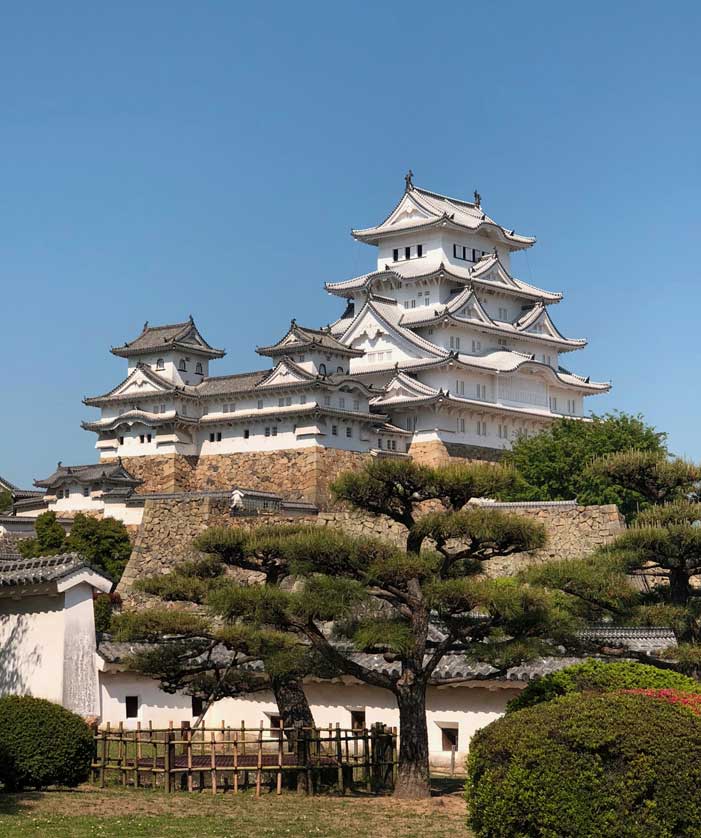 Himeji Castle in Himeji in Hyogo Prefecture, not far from Kobe, is Japan's largest and most spectacular castle, and certainly its most visited.

A UNESCO World Heritage site (one of the first to be registered in Japan), Himeji Castle is also known as the Shirasagijo ("White Egret Castle") or Hakurojo ("White Heron Castle") due to its bird-like silhouette and white plaster walls. Himeji Castle is one of only twelve original extant castles in Japan.

There has been a fortress on the existing site since the 14th century when Sadanori Akamatsu established the first castle here, but present-day Himeji Castle was begun by warlord Hideyoshi Toyotomi in 1581, when he constructed a three-story donjon (central keep) on the site of Himeyama Hill in the very center of present-day Himeji City. 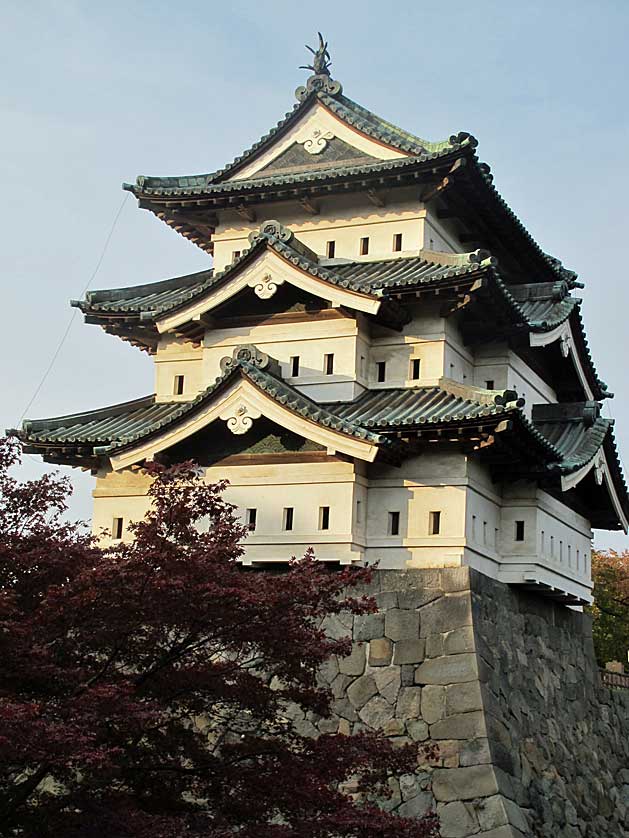 Hirosaki Castle in Hirosaki is set within the huge Hirosaki Park, which was once part of the large, original castle of around 49 hectares, which had six concentric, walled baileys, separated by moats.

Hirosaki Castle is particularly famous for its over 2,600 cherry trees of different varieties in spring and its red maples also attract visitors in autumn. In winter, Hirosaki Castle makes for a beautiful sight, illuminated in the snow.

The Hirosaki Cherry Blossom Festival corresponds to the period roughly around Golden Week in late April and early May.

Most of Hirosaki Castle Park is free to enter and admission is only charged to the keep, which is open as Hirosaki Castle Museum and the Botanical Garden (Arboretum). Hirosaki City Museum (Tel: 0172 350 700) is also within the castle environs and displays archaeological finds from Aomori Prefecture, as well as local art works including sculpture and painting. 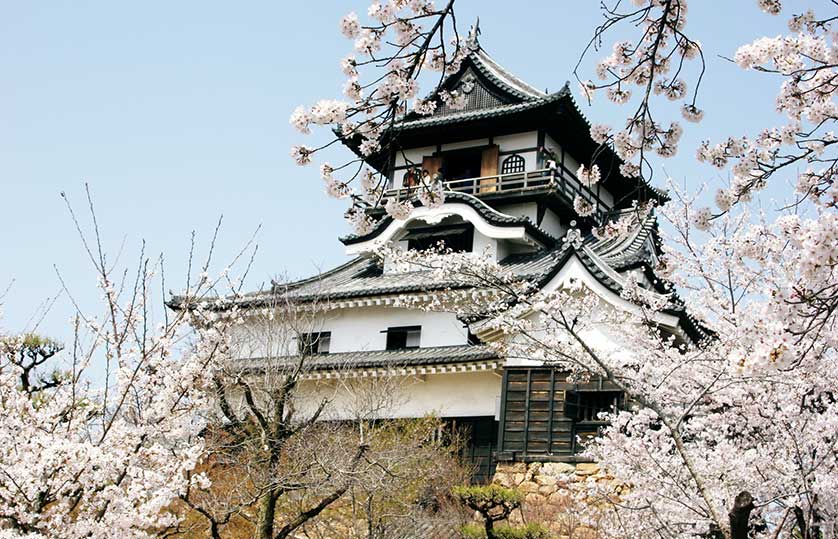 Inuyama Castle is the oldest fortress in Japan dating back to 1440. Inuyama Castle's present keep was constructed in 1537 and is an outstanding example of Momoyama Period defensive architecture.

Located in Inuyama, Aichi Prefecture, north of Nagoya city, the castle is a 15 minute walk from Inuyama Station or Inuyama-Yuen Station on a small hill.

It overlooks the clear Kiso River below and Inuyama town. Inuyama Castle grounds contain a number of small shrines and there are a several viewpoints of the town and valley below.

The castle was strengthened by Oda Nobuyasu, the uncle of local strongman Oda Nobunaga, in 1537. Inuyama Castle has four storeys above ground and two basement storeys. In 1584 the castle was occupied by the forces of Toyotomi Hideyoshi during the battle of Komaki Nagakute against the army of Tokugawa Ieyasu. 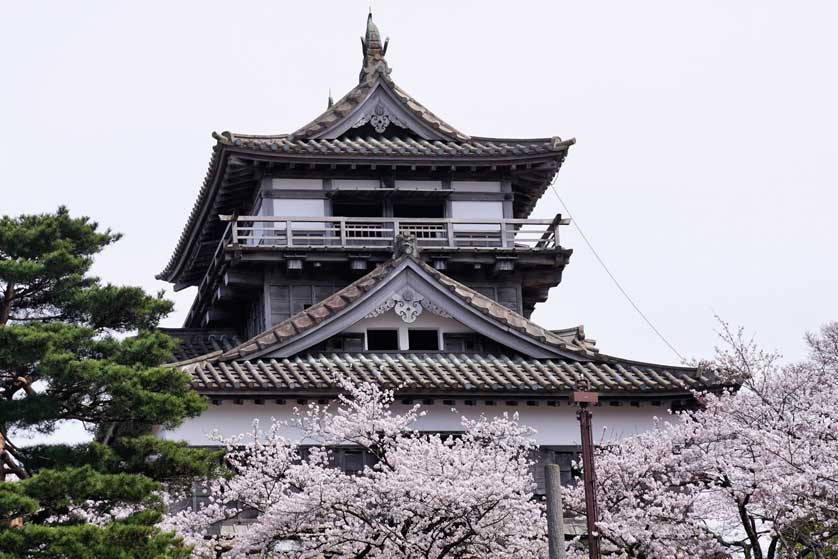 Maruoka Castle is in Sakai city, Fukui Prefecture. The castle was built in 1576 by Shibata Katsutoyo. The small, 3-story keep claims to be the oldest in the country. However, both Inuyama Castle and Matsumoto Castle also claim to have the oldest tenshu. 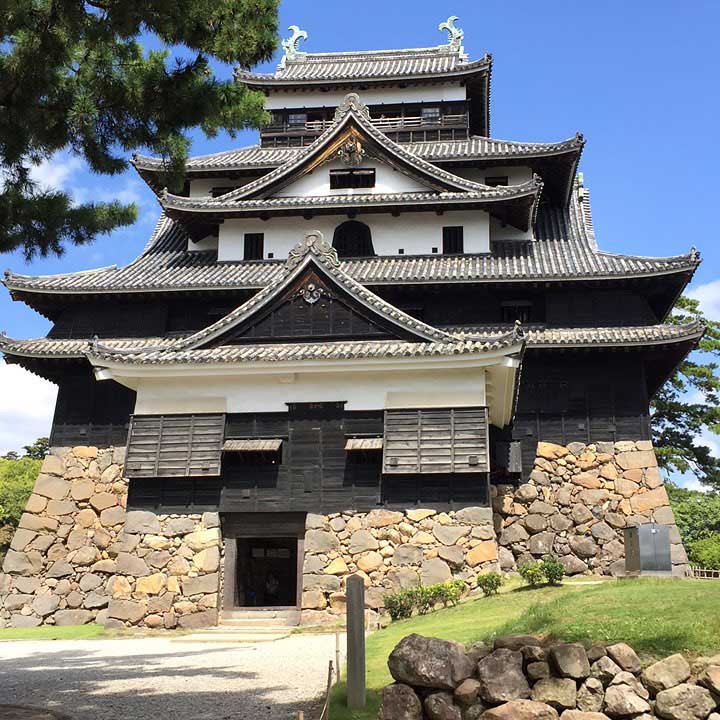 Matsue Castle in the town of Matsue, Shimane Prefecture, dates from 1611, when it was built by the local feudal lord Horio Yoshiharu.

Perched on a 28-meter high plateau known as Jozan, Matsue Castle is a commanding presence in the center of the city, and is surrounded by high stone walls and a moat. Matsue Castle is one of only a handful of castles in Japan that has not been destroyed by fire or war and is completely original.

For 230 years, until the Meiji Restoration of 1868, the castle was home to the Matsudaira clan, a junior branch of the ruling Tokugawa family. The castle underwent reconstruction and repair work in the 1950's. Further restorations were completed on three turrets on the castle walls in 2001. 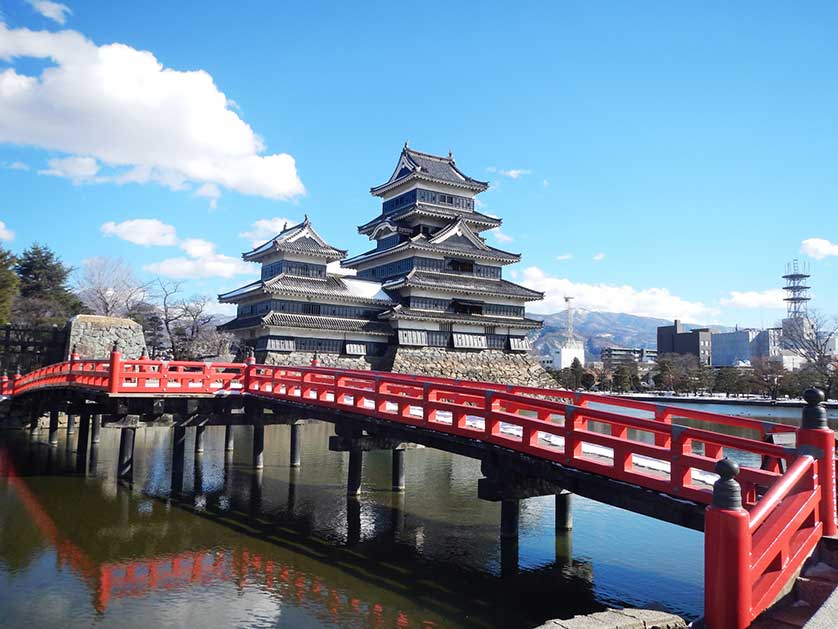 Matsumoto Castle, in Matsumoto city in Nagano Prefecture, is among Japan's oldest and most beautiful castles and along with Hikone Castle, Himeji Castle and Inuyama Castle, is designated as a National Treasure. Matsumoto Castle is one of Japan's only twelve completely original castles.

Matsumoto Castle's black painted, wooden keep (donjon) is the oldest surviving such structure in Japan, dating from 1595. The black color gave Matsumoto Castle its nickname "Karasujo" (Crow Castle) and the brooding, somber color was designed to sow fear in the hearts of any approaching attacker. Matsumoto Castle is built on flat ground and is thus classified as a hirajiro in Japanese (flat-land castle) and has a large moat and thick walls as a means of defense.