The approximately 1,200 kilometer circulatory pilgrimage around Shikoku, the smallest of Japan's four main islands, is most commonly known as Ohenro. 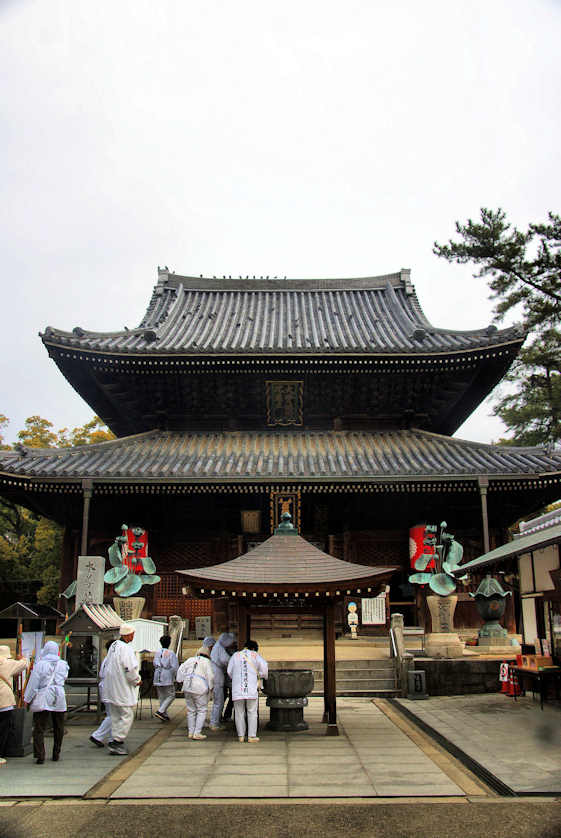 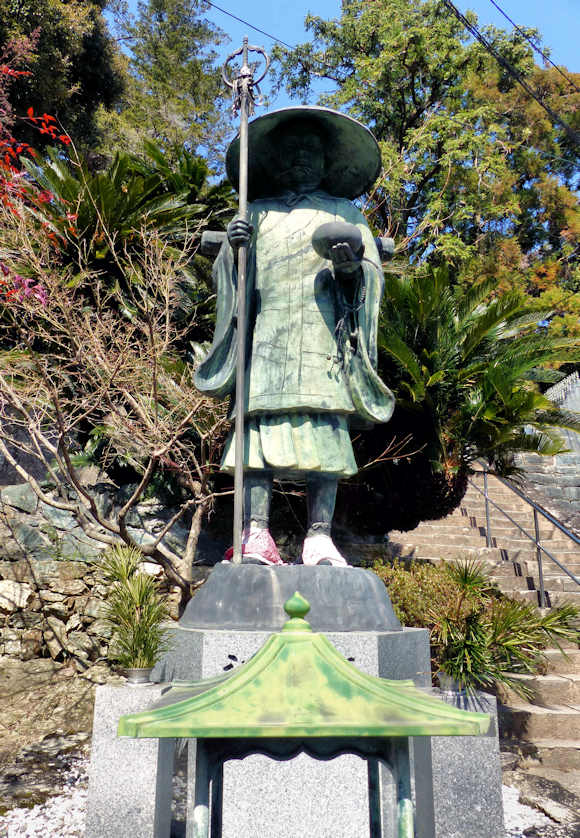 Statues of Kobo Daishi are commonplace along the Shikoku Pilgrimage

Visiting 88 temples associated with the holy man Kobo Daishi, the Shikoku Pilgrimage is not the oldest pilgrimage in Japan - which is probably the Saigoku Kannon Pilgrimage in the Kansai Region - nor is it (yet) a World Heritage Site like the Kumano Kodo in Wakayama and Mie prefectures.

However, the Shikoku Pilgrimage is certainly the most well known pilgrimage today, both within Japan and abroad. Every year hundreds of thousands of pilgrims from Japan and elsewhere will be found following the route.

The temples of the Shikoku Pilgrimage are scattered across the whole of the island of Shikoku, mostly on or very near the coast. And while some are found a little inland on mountains, the interior of the island is avoided.

The route passes through the four prefectural capital cities of Tokushima city, Kochi city, Matsuyama city and Takamatsu, and much of the route is on fairly busy main roads. Some sections are in the less populated countryside and a few are on secluded mountaintops. 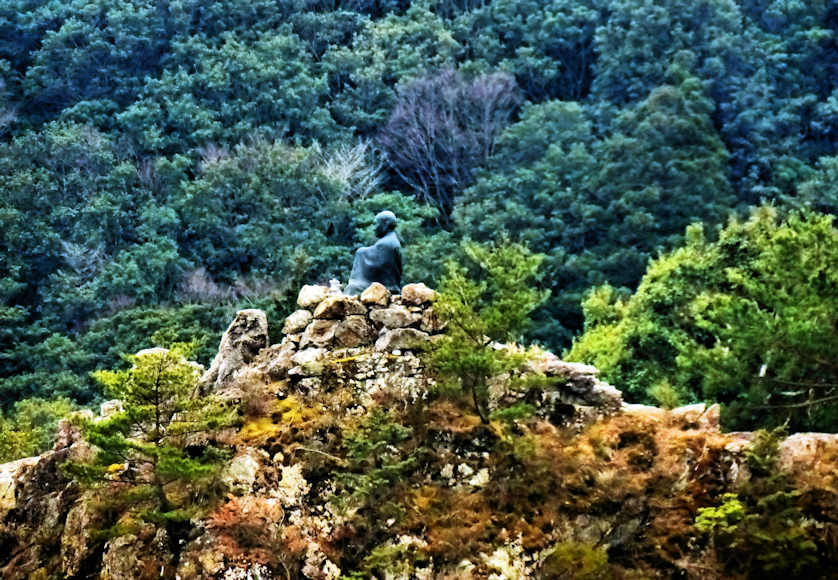 Statue of a young Kobo Daishi practising austerities near Tairyuji, one of several remote mountaintop temples on the pilgrimage that are served with a modern ropeway 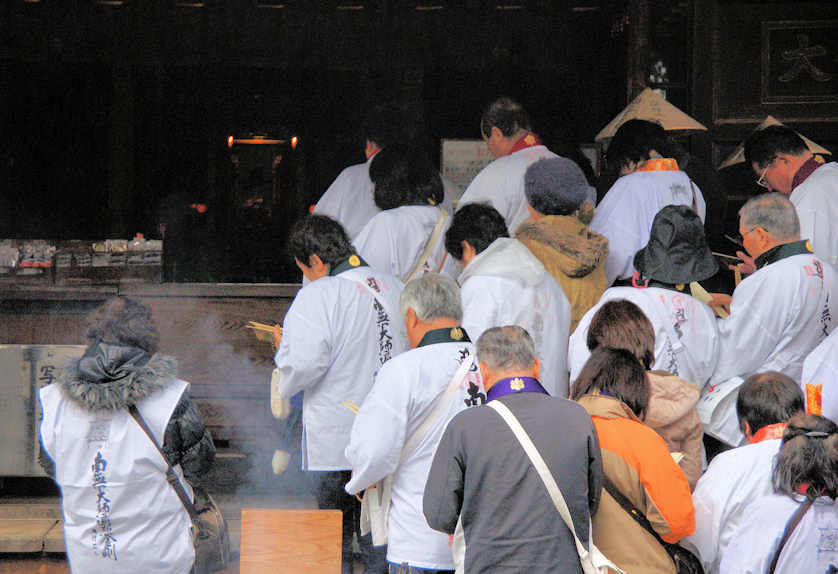 The origins of the pilgrimage are lost in the mists of time, though historians believe there were originally several smaller pilgrimage routes travelled by ascetic monks and yamabushi (hermits and ascetics who lived in the mountains).

By the Edo Period (17th-19th centuries) guide books to the pilgrimage appeared. The Edo Period was the golden age of pilgrimage in Japan when millions took to the roads. The Shikoku pilgrimage was a little different, though, as many of the other big pilgrimage routes were followed by elite members of society, yet Shikoku remained a pilgrimage for the lower classes.

Over the centuries the temples on the route changed. Some disappeared, some moved, and other were added. Before the mid-19th century, some of the sites were actually Shinto shrines. Now the 88 temples, and an "extra" twenty temples known as bangai, are set and well established. The temples belong to different sects and have different main deities, but they all have a Daishi-do, a hall enshrining the spirit of Kobo Daishi, the focus of the pilgrimage.

Known as Kukai while he lived, and given the title Kobo Daishi posthumously, he was born on Shikoku in 774. His birthplace is temple number 75, Zentsuji Temple.

As a young man he practised austerities at various remote sites around Shikoku, and some of these are now temples on the pilgrimage. He went on an official visit to China and the teachings he brought back became the basis of the new Shingon sect of Japanese Buddhism founded by him and with its headquarters based at Koyasan, a mountain temple complex south of Osaka, in Wakayama Prefecture, where he died in 838. Like many religious figures, in the centuries since his death legends about him and his feats grew and grew.

The aim of the pilgrimage is to visit all 88 of the temples, and there really are no rules that determine how you do that. Most people start at temple 1, Ryozenji, in Naruto, Tokushima and then head clockwise around the island.

This is the order in which they are numbered, but some travel anti-clockwise. If you come from Kyushu you can start at the point where you arrive on Shikoku. In fact you can visit the temples in any order whatsoever.

It is also not necessary to do the whole pilgrimage in one go. Many people cannot afford the time, so do it in sections, sometimes with years between. The weather on Shikoku is mild so it's possible to do the pilgrimage at any time of the year, but the end of March to May is the peak season, with October also being popular.

Until modern times, in earlier days there was only one method of travel for the pilgrimage - walking. That is still how many people do the pilgrimage, and it takes between 6 and 8 weeks for most people to finish.

Nowadays a lot of people are doing it by bicycle and of course plenty do it by motorbike or car. Public transport is a viable option with trains and buses passing close to most of the temples and local taxi companies well prepared for the needs of pilgrims, but probably the most popular option for Japanese is the group pilgrimage by tour bus, though most foreigners seem to prefer to walk. Of course, a combination of all transport options is feasible.

The priest Kukai visited many more temples on Shikoku island than just the renowned 88. So, in 1968, twenty other Shikoku temples that he had visited banded together to form the Shikoku Bekkaku Jureijo (literally the "Twenty Other Sacred Places on Shikoku"), but more commonly known as the Bangai. 88 + 20 = 108, evoking the "108 Afflictions" of Buddhist theology which must be overcome. So, including the Bangai temples in your pilgrimage is therefore claimed to further benefit karma by helping the pilgrim conquer these afflictions. 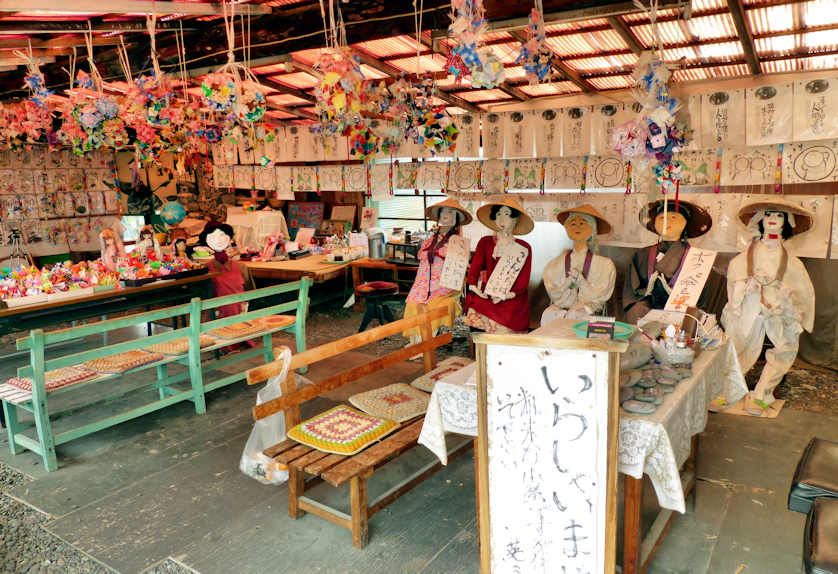 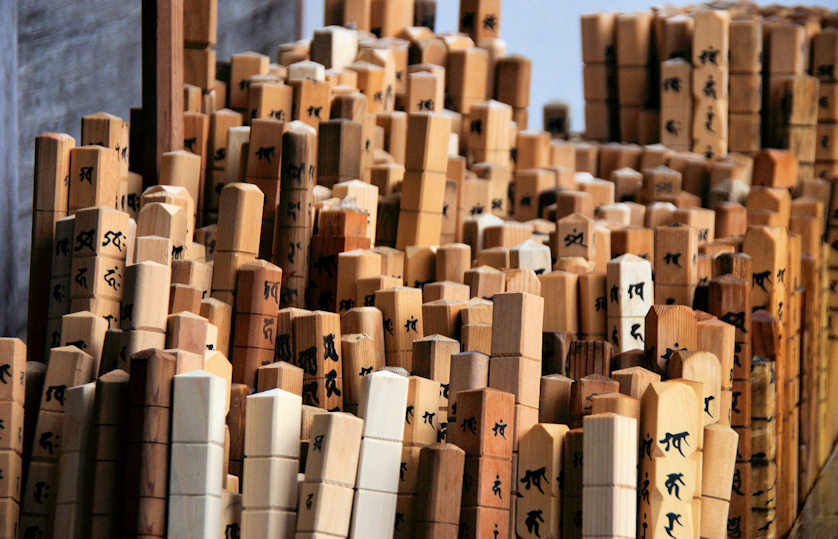 Staffs, kongozue, left by pilgrims after completing the pilgrimage at temple 88 Okuboji

Pilgrims can easily be recognized by three particular items. They are usually dressed all in white, or if not completely white, then at least a white jacket or vest called a hakui.

Historically white was how a corpse was clothed and so signifies that the pilgrim was prepared to die on the pilgrimage, something that did happen in earlier times though nowadays the white is said to represent purity.

Many pilgrims wear a conical sedge hat called a sugegasa, good for protection against the sun and rain. It is very unusual to find a pilgrim not carrying a wooden staff called a kongozue. Even pilgrims travelling on a group tour bus will carry one of these as it is said to be the embodiment of Kobo Daishi himself accompanying you on the pilgrimage.

Listen to the sound of henro pilgrims chanting 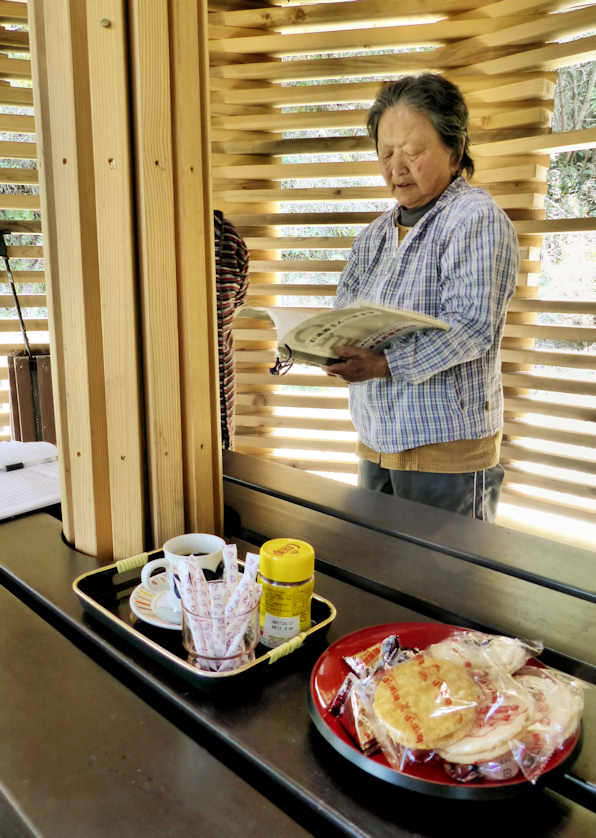 Volunteers all along the pilgrimage route offer free drinks and snacks to walking pilgrims: here at a rest hut in Mugi, Tokushima 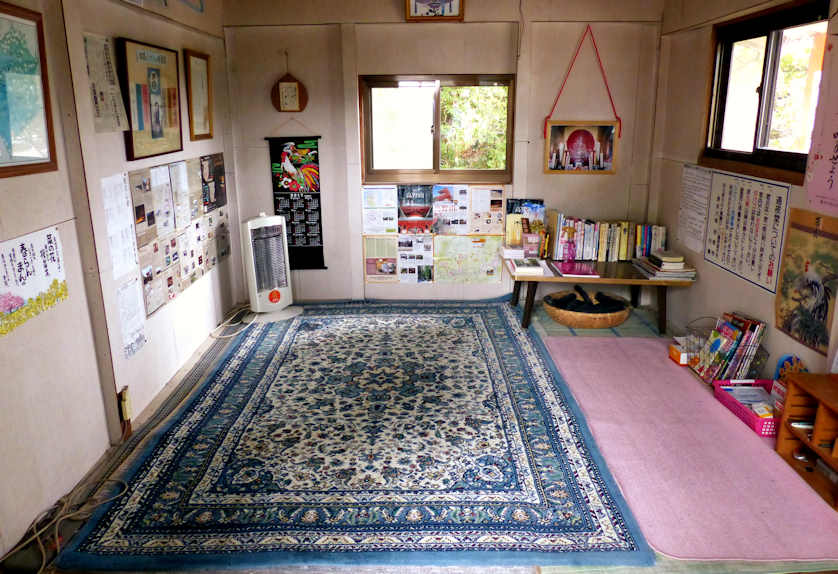 Some temples and individuals offer free accommodation to pilgrims

One of the most well known features of the Ohenro is something called o-settai, which translates as alms or gift giving, and is the tradition on Shikoku of local people supporting the pilgrims.

Quite commonly you will find strangers coming up to you and giving you snacks or drinks. Sometimes it is quite organized, with places set up where locals hand out food and drink to every passing pilgrim.

Many businesses will offer free gifts to passing pilgrims, onsens offer reduced rates for pilgrims, for example, and many places offer free, though quite simple and spartan, places to spend the night.

All over the island are rest huts where walking pilgrims can get shelter for a while, and in some cases spend the night. Even more so than in the rest of Japan, strangers will be helpful, to Japanese and non-Japanese alike.

Anyone thinking about doing the pilgrimage, even in part, and also anyone going to spend time on Shikoku, should get hold of the Shikoku Japan 88 Route Guide, a small pocketbook truly packed with all the practical information you need to plan your trip.

Map of the 88 Temple Shikoku Pilgrimage

1) Ryozenji Temple 霊山寺 - temple number one on the Shikoku Pilgrimage.

41) Ryukoji 龍光寺 - temple number forty one on the Shikoku Pilgrimage.

51) Ishiteji 石手寺 - temple number fifty one on the Shikoku Pilgrimage.

61) Kouonji 香園寺 - temple number sixty one on the Shikoku Pilgrimage.

71) Iyadaniji 弥谷寺 - temple number seventy one on the Shikoku Pilgrimage.

81) Shiromineji 白峯寺 - temple number eighty one on the Shikoku Pilgrimage.

If you are starting the Shikoku pilgrimage at temple number one Ryozenji you will need to arrive in Tokushima.

Tokushima Airport (Tel: 088 699 2831) is 8 km north of the city with hourly buses to and from Tokushima Station (30 mins). There are daily flights to Tokyo, Nagoya and Fukuoka and flights to Sapporo in summer from Tokushima.

JR Marine Liner trains from Okayama Station connect south to Takamatsu in 55 minutes and Tokushima (with a change in Takamatsu to the Uzushio Express) in around 2 hours.

The main bus station is the the main square outside JR Tokushima Station. There is a booth here from where you can buy tickets. The bus departure points are clearly marked with the names of the destination cities.

A little to the east of JR Tokushima Station is another highway bus departure point, the Kaifu Kanko Bus Oasis, from where there are buses to Anan, Nakagawa, Matsushige, Sannomiya, Shin-Kobe, Osaka and Busta Shinjuku Bus Station (4F) and Tokyo Station in Tokyo. Overnight buses for Tokyo leave at 9.20 pm, 9.50 pm and 10.05 pm.

For further information on routes and prices see the Kaifu Kanko website.

The ferry port to Wakayama with Nankai Ferries (Tel: 088 636 0750) is a 15-minute bus or taxi ride from the station. The boat journey to Wakayama takes two hours. 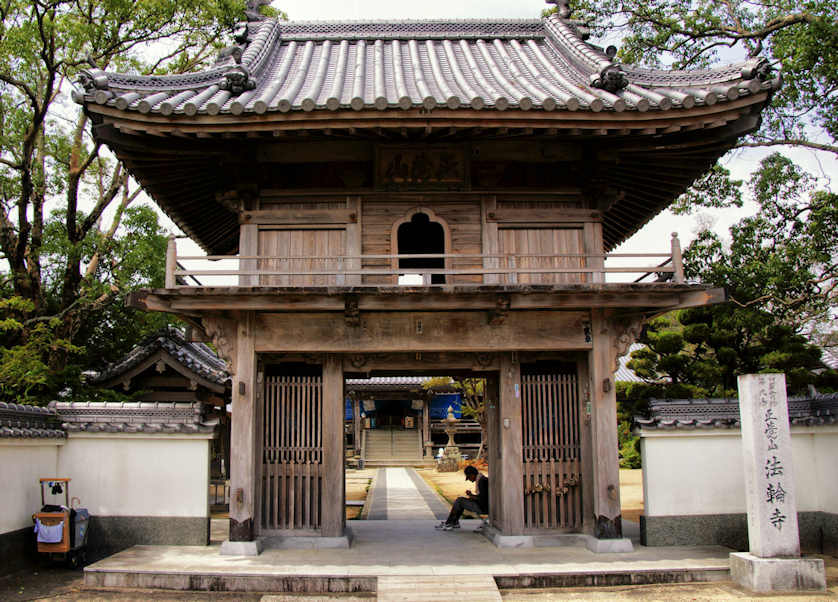 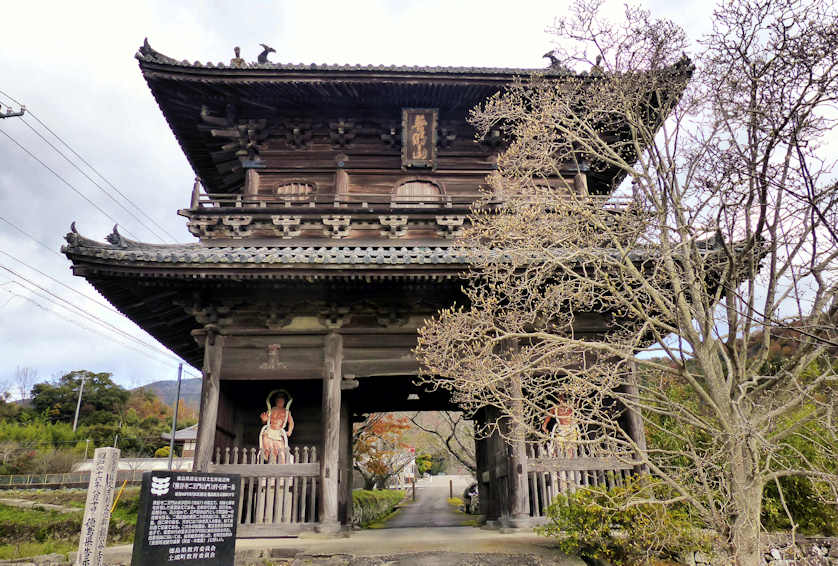