Japan sento (public baths): read an article on the history and background of Japanese public bathhouses or sento; what they are and how to use them.

Jim Cathcart gets himself into hot water... 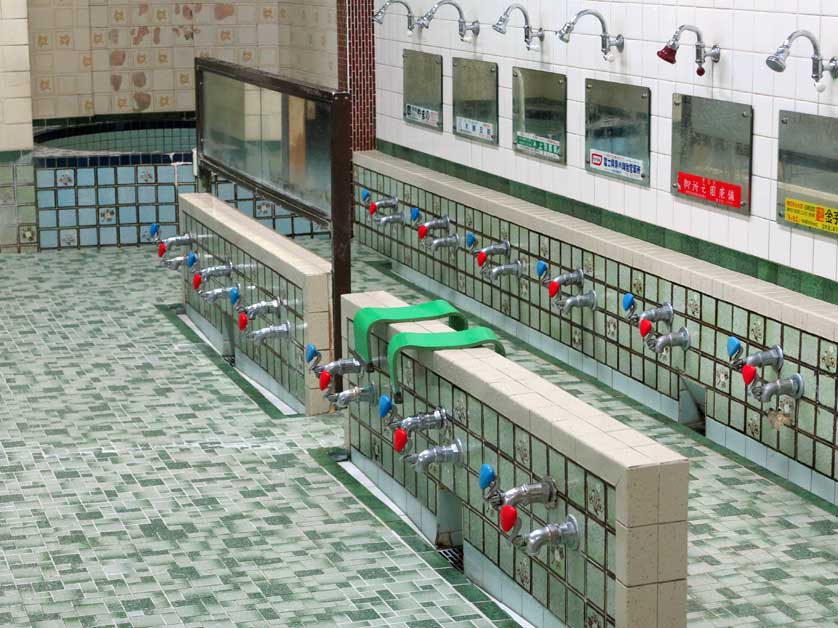 For relaxation, refreshment, hilarity, the "kicking-it-with-the-locals" experience, or simply the bliss of total cleanliness, a visit to the sento should be penciled, if not inked, in during your stay.

For the Japanese, the equation is simple: sento = cleanliness + nakedness + togetherness, without any of the kinky or shamefaced connotations Westerners usually associate with full frontal nudity and communal space. 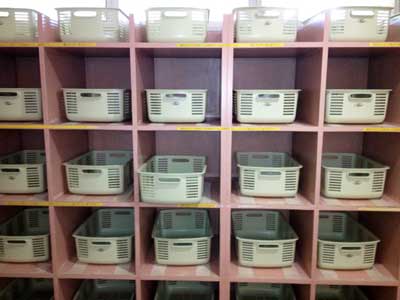 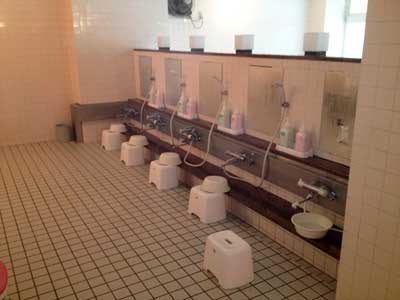 Washing area before entering the baths 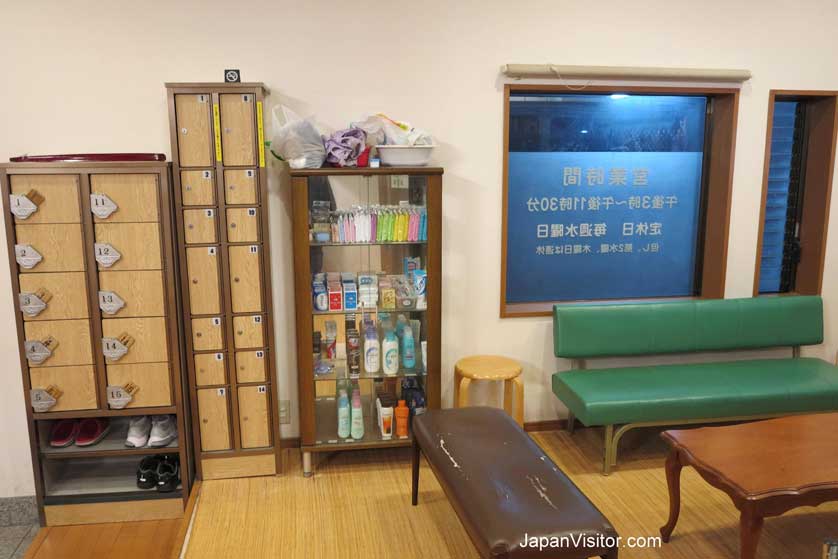 The rules of Sento

Coincidentally, Japan has never been the most PC of countries and rumors abound regarding the barring of foreigners from entering these least private of public places. Incidences of drunken Russian sailors water-fighting in the bathhouses and onsens (hot springs) of the northern island of Hokkaido have fuelled a tabloid debate about whether or not the hairy barbarian with little understanding of the subtle nuances of Japanese culture should be tolerated.

However, if a few simple rules are followed, a sento visit by the alien poses no problem and is an excellent opportunity to pay homage to Japanese ingenuity and high standards of cleanliness, as well as to get a glimpse of what is a vanishing monument of Japanese culture. 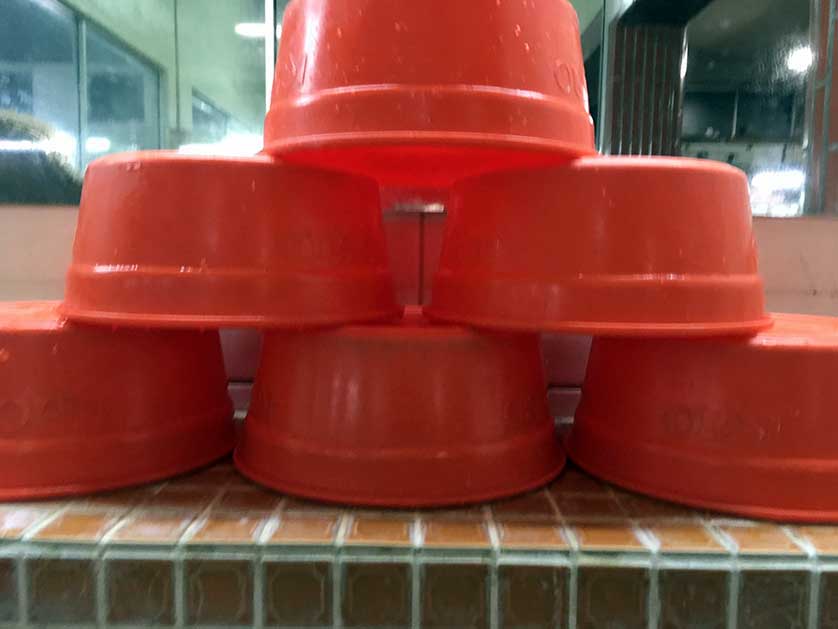 The History of the Sento

The sento has existed for over 400 years in Japan, but a post-war construction boom in residential housing without bathing facilities or running water cemented the sento's prominence in the community. Sento numbers are dwindling today as Japanese can now afford baths or showers in their own homes.

The Yomiuri Weekly newspaper reports that sento are disappearing at the rate of one a day. Numbers peaked in 1964 at 23,016, but are currently at 8,422. For a class-conscious society, the sento has become an embarrassing reminder of an impoverished past, and as the ranks of Japan's noveuau riche have continued to swell, an undeserved stigma has fallen upon those who patronize the humble sento; it has become the domain of the shitamachi (inner urban areas) and the industrial "working class" suburban sprawl.

However, the sento remains a veritable oasis in many communities, especially in the suffocating summers and brass-monkey winters, and recreational reincarnations have kept the spirit alive. As an example, in the northern suburbs of Osaka, a mega-sento was built in the 1960's for families to experience the community's spirit of yesteryear. On a Friday night, this expansive water world, featuring a rotemburo (outdoor hot spring) and udon-ya (noodle bar), is the Al's Aquatic Diner of family entertainment, with cars backed up a mile expertly coordinated by uniformed security guards wielding fluorescent batons. Operating 24/7, this sento is a more modest and family-oriented version of some of the wilder forms of sento entertainment that exist today. 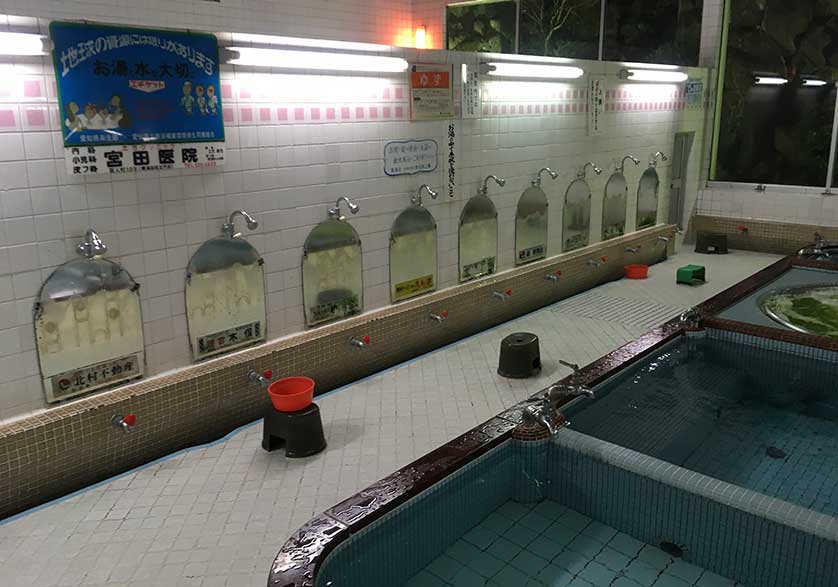 Bathhouse interior showing taps and a shower above the mirror

A different type, the bath house with sex on sale was originally called a "Turkish bath" a lingering sore point for the longstanding Turkish ex-pat community in Tokyo and has now been replaced by the blandly named Soapland, where a full range of extra services cater to the sexual needs of Japan's salaryman (male office worker).

Many soaplands are strictly off limits to foreigners: partly a result of racism and ignorance, but also largely contributed to by the average Japanese person's fear of the perceived unpredictability of foreigners. However, with the full-blown recession taking its toll on the randy Japanese male's wallet, a soapy servicing for the foreigner is not beyond the realms of possibility, particularly in Tokyo and Osaka. 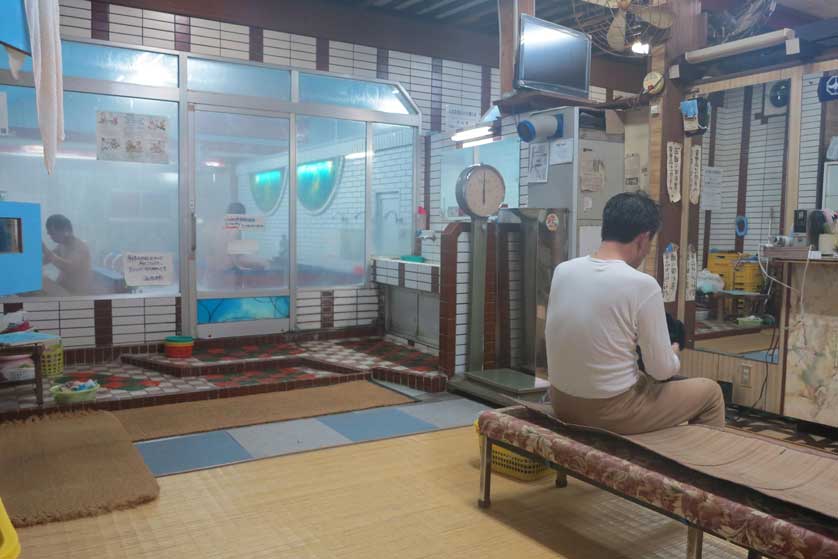 Entering a sento for the first time can be a particularly nerve-wracking affair for the unsuspecting foreigner. The thought of baring for all and sundry is just a little over the top for your average, gun-shy tourist. But for those prepared to take the plunge, the bathhouse offers an energy-priming prelude to a night out on the town or a revitalizing soak after a long day. The sento is not on the stop for tourist buses, but as mentioned before, if one follows the correct protocol, you are as likely to be treated with excessive friendliness as with physiologically-focussed curiosity or total disregard.

The first thing to remember is to remove your shoes - the first rule any foreigner should heed when entering a Japanese private space. In most cases lockers are available, but shoe sizes over 28 cm may require some extra effort as the Japanese foot is one part of the anatomy that is usually more compact than that of the average Westerner. Next, the admission fee.

Most sentos use ticket vending machines stationed in the entrance. The hurdle here: pressing the correct button. Remember, local governments subsidize the sento, so the price of admission should not exceed 400 yen -- assuming you don't need a towel, soap, shampoo, shaving cream, toothpaste, hair oil, so look for the closest yen figure.

After passing your token or ticket to the custodian (most sentos are family owned and operated), you may enter either one of two enclosed sections: one for the boys, one for the girls. As with most gender-determined spaces in Japan, the women's side is likely to include at least a little pink decor, and the men's some blue. The custodian will usually keep the wa (harmony) by pointing you in the appropriate direction. If you make a wrong turn, bow and smile and change track.

Once inside, you will see lockers for your clothes and valuables. A word of warning: many sentos used to ban customers with tattoos, which are the traditional symbols of the Japanese mafia, the yakuza. In the last 10 years, the tattoo stigma has been waning as tattoos are fast becoming de rigueur amongst fashionable younger people. Unfortunately, the sight of tattooed foreigners can still cause alarm among some of the less open-minded. Don't let this put you off - you might even get some compliments on your artwork. An Israeli sento aficionado living in a gang-infested part of Osaka, who is also heavily inked from the neck down, recounted his official welcome into the neighborhood resulting from the interest of two living artworks, a.k.a., the yakuza. 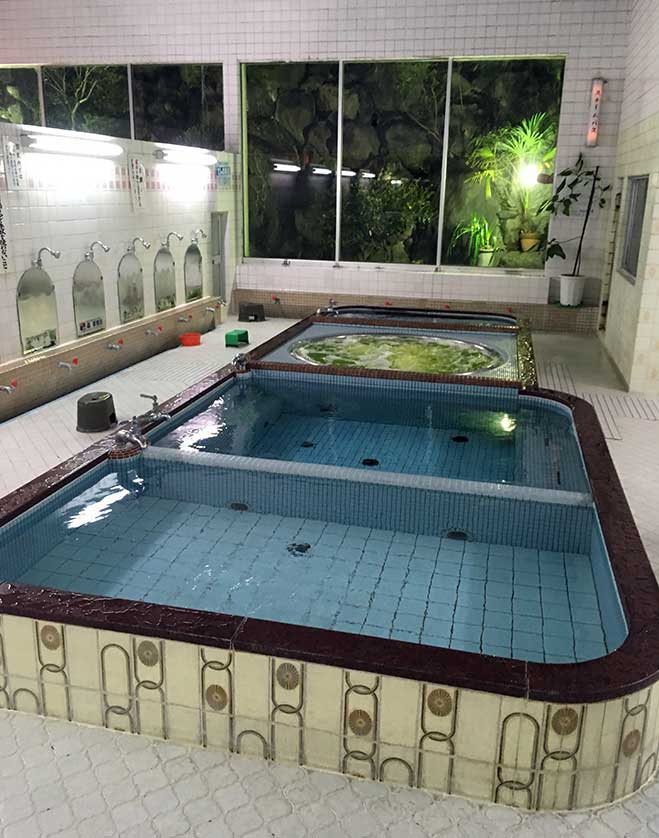 Bathhouse interior of a Japanese sento

The sento is roughly divided into two sections: where you wash and where you relax. It is extremely important that you don't confuse the two. To dive into one of the spa baths with flannel and soap is definitely not the way to go.

Wash thoroughly before entering the relaxation baths. It is important that every square inch of skin gets a pre-soak lashing of the suds. Typically, one squats centimeters above the ground under small showers with the backside resting on a miniature stool. Don't worry, it is more comfortable than it sounds - even if the knees have seen better days. Instead of allowing water to run over yourself as you clean considered wasteful in Japan - pour water over your body with a shallow plastic bucket provided by the sento.

Shaving and brushing of teeth is allowed. Just make sure you wash away the gremlins afterwards.

Once you've cleaned yourself entirely, ensuring that all the soap and shampoo have been rinsed away, it is safe to proceed to the range of baths for relaxation. What is particularly appealing about the sento is that each retains its own distinct character, which extends to the facilities on offer.

At the very least, a sento will include foaming spa baths and still hot baths. A plethora of possibilities exist, from the aforementioned to an evil beast called the denki buro: which translates as "electric bath." Whatever you learnt about the dangers of water and electricity at primary school are totally confounded here. The denki buro is a small bath equipped with steel plates that discharge pulsing currents of electricity into the submerged bather.

According to local sources, the electricity relaxes the muscles, doing nothing to dispel the myth that the Japanese have unusually masochistic tendencies. Rumors exist amongst younger people that the denki buro devastates the sperm count, so it may be a cheap substitute for the vasectomy. This writer, who has an acute fear of electric shocks and a sensitivity to even a hint of static, was convinced of this when he gingerly tested the waters for a split-second. For even the hardest of hooligans that plans to grace these shores, this ultimate test of machismo is sure to shock. 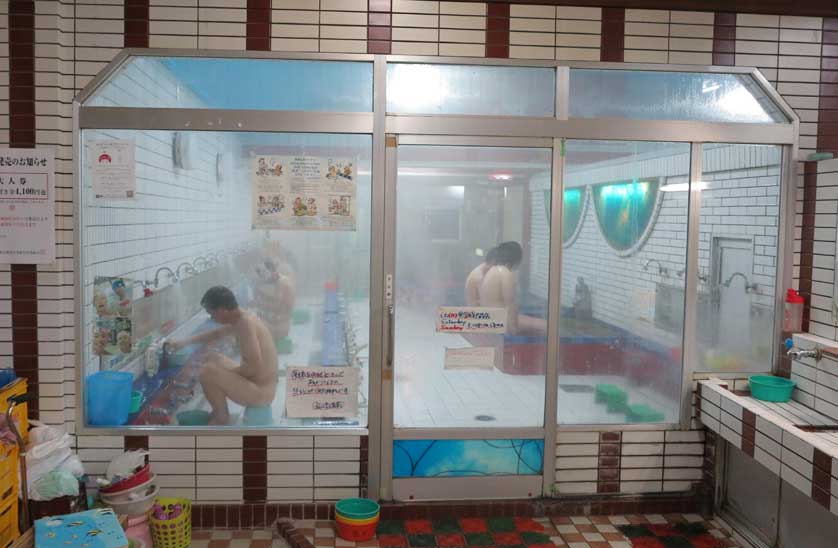 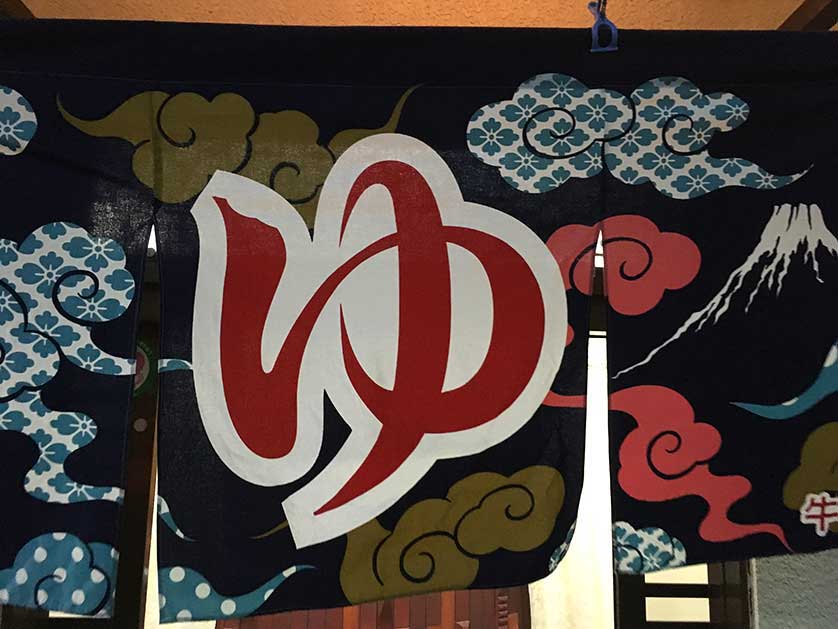 Entrance noren curtain at a sento with the ゆ symbol

Relaxing in the Sento

The baths are for relaxing: an important point to remember. Making sure you're fully washed and showered before entering will appease the locals. Most baths are classed by temperature: tei-on (tepid) to chu-on (warm) which is bearable for 10 minutes or so, and then ko-on which will convince you the Japanese are as twisted as the TV game shows suggest they are. If you can't read the kanji (Chinese characters), you can judge the temperature and severity of a bath by the oji-san (senior citizen) factor - generally the temperature of the water is roughly equal to the age of the bather. Of course, we're talking Celsius.

The ja-kuu-ji (Japanese for jacuzzi) bath is also popular, and many are spiked with scented bath oils to sooth and restore vitality. The utase buro massages the head, shoulder, spine and back with a high-pressure stream of hot water pummeling down from a meter or so above. Steam rooms and saunas can also be found in most sentos. And if you're lucky, some sentos have tapped spring water, which enables them to recreate the rotemburo: an outdoor hot spring that is a cheap alternative to the traditionally expensive onsen resort.

Sentos are civil and respectful arenas, and privacy is respected. However, it is important to note the existence of a certain fascination with gaijin anatomy. As stereotypes abound in every society, those pertaining to the size of foreigners' genitals are pervasive in Japan. An Australian bather was once told, after a physical examination from a curious local, "So what they say isn't true, you're no bigger than the rest of us."

Another German visitor was bemused when an interested local asked him if he shaved because "gaijin (foreigners) have more body hair than that." Women are treated with more awe, according to a buxom lounge hostess from California. She adds: "if the customers at the cocktail lounge were as respectful as that, the job could almost be enjoyable."

Sentos are no longer mixed, a result of Japan's efforts to impress upon the prudish Western world during the Meiji period (1867-1912) that they were indeed "civilized."

While discovering a bath house by yourself is fun, there are a few web sites that can help you on the way.

Some recommended public baths in Kyoto are Daikoku-yu, Idutsu-yu, Sakura-yu, Higashiyama-yu and Funaoka Onsen. Daikoku-yu is particularly foreigner-friendly being located close to an international hall of residence of Kyoto University.

Read more about Public baths (sento) in Kyoto and the Best Onsen in Kyoto. 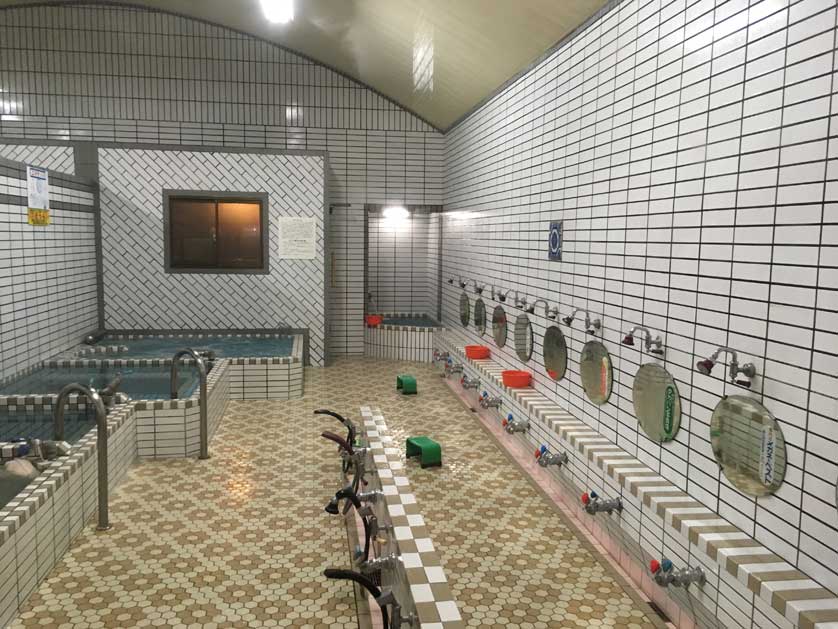