Ema: ema are rectangular wooden tablets offered to the gods in Shinto shrines with wishes for good fortune. 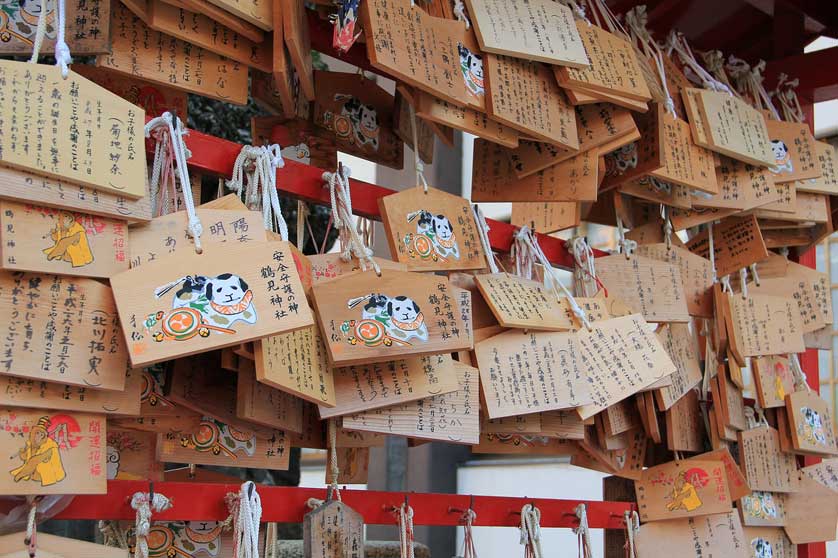 Wooden prayer tablets,
or ema are a common sight in Japanese shrines

No visit to Japan is complete without a visit to a Shinto shrine. Shrines and temples abound in Japan and the easiest rule of thumb to distinguish between them is to consider the approach way. Shrines are approached by a path, whether narrow or broad, that passes beneath a Torii, a ritual entrance gate. Shinto rituals are largely about purification and when visiting a shrine, purification starts here by passing through the Torii. Buddhist temples typically lack the Torii.

After passing through the 'gate' the pathway will lead to the Honden, the main building that houses important objects of worship, that represent the deities enshrined there.

Unlike a Christian church or a Moslem mosque, the main building of the shrine is not one that visitors enter. Instead they pray outside it. But first, further purification is required. Somewhere nearby there will be a chozu-ya, a place for purification of the hands and mouth.

A trough with water flowing into it, with bamboo dippers at hand, indicates the place. There the dippers are used to convey water to the hands and mouth, and as with many aspects of Japanese culture, there is an accepted procedure to be followed here.

Purified, by passing into the shrine compound through the torii and then with water, offerings of coins and prayers can be made to the deities. A rattling bell is at hand near the wooden, slat-lidded offertory box with which to awaken the deities and if that doesn't work then the ritual of tossing a coin that rattles into the offertory box, and clapping and bowing before the shrine, is all deemed to do the trick! 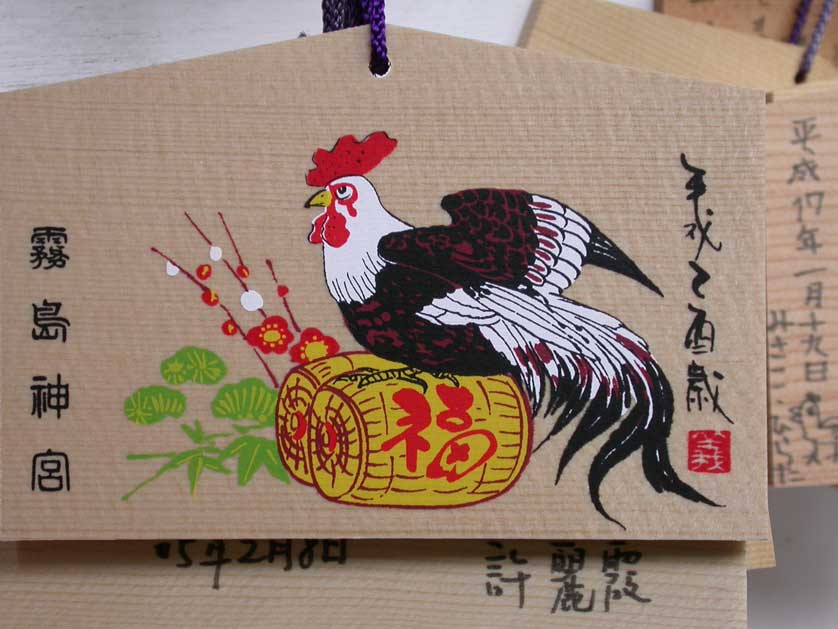 Wooden prayer tablets, ema, commonly depict the zodiac animal of the year - here the rooster in 2005. 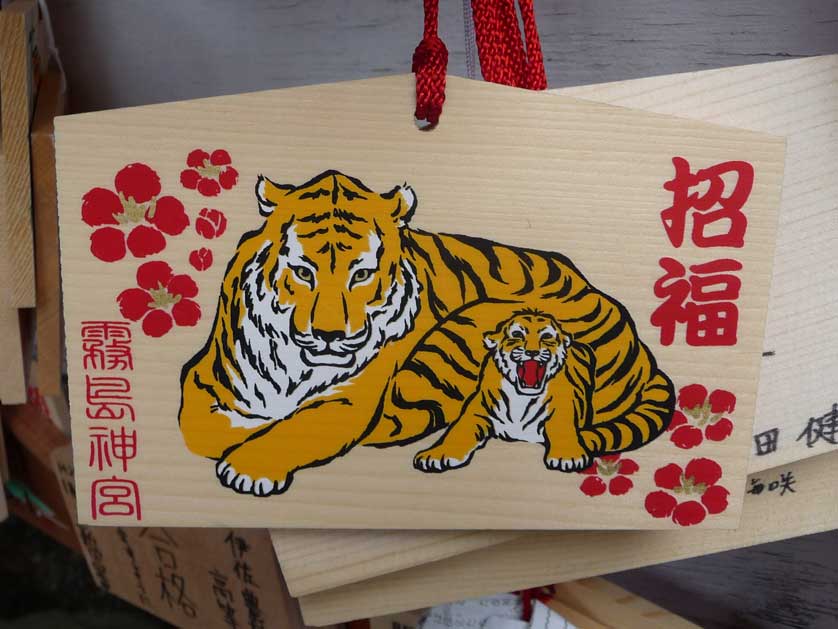 In the year of the tiger (most recently in 2010, next in 2022), more images of tigers adorn ema hanging outside shrines in Japan than real tigers survive in India. People born in 'tiger' years are both sensitive and stubborn, courageous and showing great sympathy.

Offerings at shrines used to come in many forms, and the scale of donations varied enormously. The wealthy donated horses the symbolic vehicle by which the gods rode down to the shrines, but the expense of that practice led to its demise. The offering of living horses was replaced by offering symbolic horses, painted on rectangular wooden tablets known as Ema (literally 'e' and 'ma' mean a picture horse), shaped as if the angled upper edge is a roof over the horse.

Today, one can find many other animal images depicted on ema, though horses still predominate. The other animals are typically those of the 12-year zodiac: rat, ox, tiger, hare, dragon, snake, horse, sheep, monkey, rooster, dog, and boar, and each one becomes abundant in turn, depending on the year.

The visitor purchases the ema from the shrine attendants, and so contributes financially to the shrine, and the attendant not only sells it but blesses it too. The illustrations on the front of the ema are done by hand in water-colours, or screen printed, but some are sold blank so that the shrine visitor can produce their very own, unique ema.

The visitor then writes a prayer, though perhaps its better interpreted as a personal wish, on the reverse side of the ema and hangs it, with countless others, on a frame specially designated for that purpose, and from which the kami, the enshrined deities, receive them. 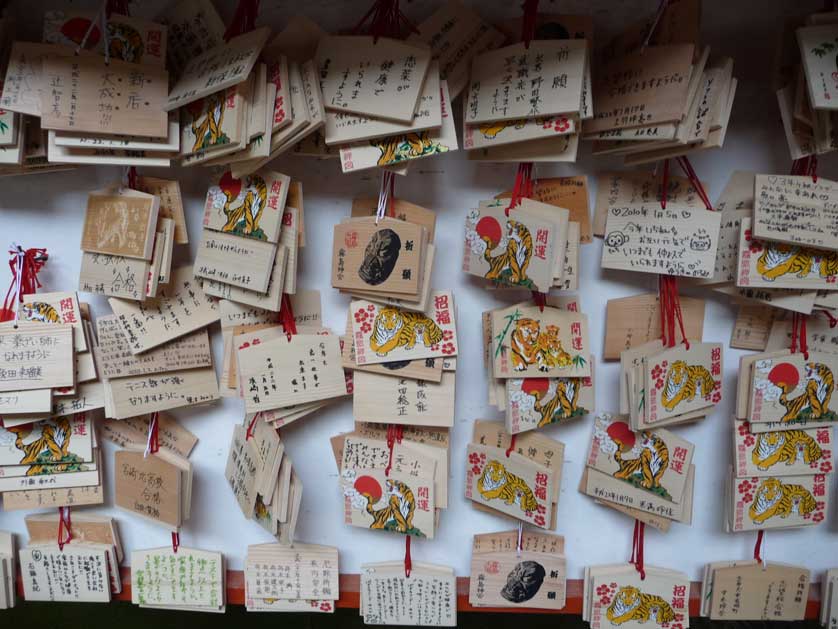 A cluster of ema at Kirishima Jingu, Kagoshima Prefecture, Kyushu. 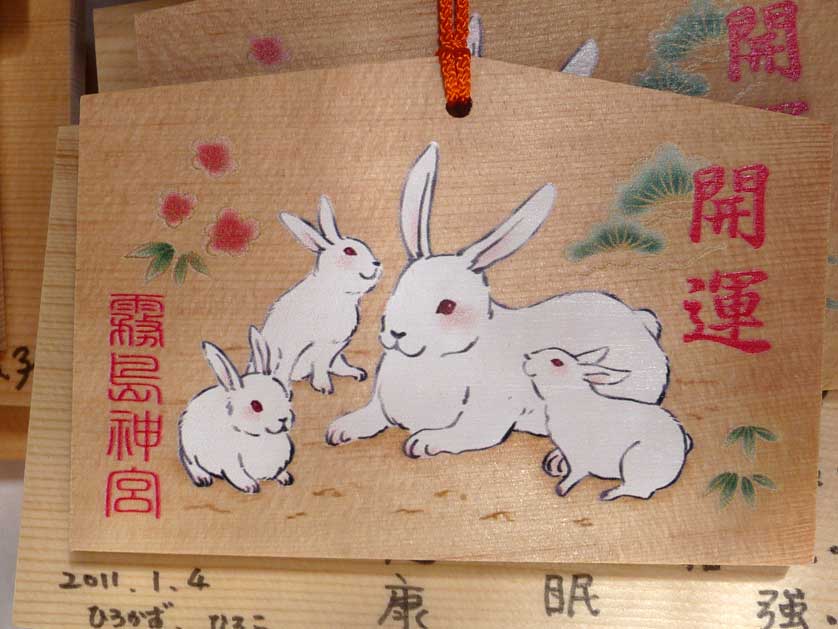 Hares (frequently called 'rabbits') represent the zodiac year 2011, and will next re-appear at shrines in 2023. People born in these years are fortunate, talented, ambitious and reserved.

Watching the process of offerings and wishes at shrines in Japan reflects a fundamental difference between monotheistic Judaeo-Christianity and Islam, and polytheistic Shinto.

In the former, God is somehow aware of us as individuals, endlessly looking over our lives, and prayers are as often about others and their needs as for the person offering the prayer. In the latter, the attention of the deities must be drawn from the higher plane of their world down to ours and, having caught their attention, the person offering wishes or prayers to the enshrined deity focuses most typically on themselves and their own needs and desires.

Thus the prayerful inscriptions on ema are less about world peace, about bringing certain wars to an end, about ending the suffering of famine or drought in some other part of the world, and much more about the here and now. Many ema bear wishes offered by junior or senior high school pupils, inevitably praying for their own success in the entrance exams for the prestigious high school or university of their choice. Others, written by young men and women may carry wishes for a happy marriage, while those by young married couples may be appeals for children, or for health. 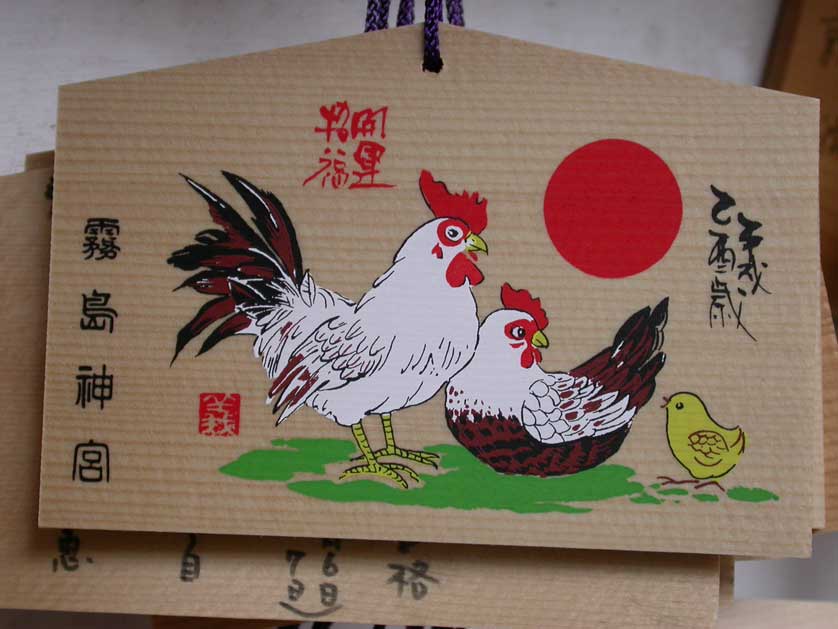 Delve into the clusters of ema hanging at any shrine (though not too closely as its considered rude to read others' prayers) and you will find a fascinating array of illustrations, dominated of course by the zodiac animal of the current year or by a symbolic aspect of the particular shrine, but now with a new and added twist.

Otaku, the famous anime and manga geeks of Japan, are infiltrating ema culture and transforming it in their own unique way, leaving their anime illustrated versions of animals or mystical creatures on their votive prayer tablets. As the transition from gifting a horse to gifting an image of a horse revealed, ancient culture is not immune to change. 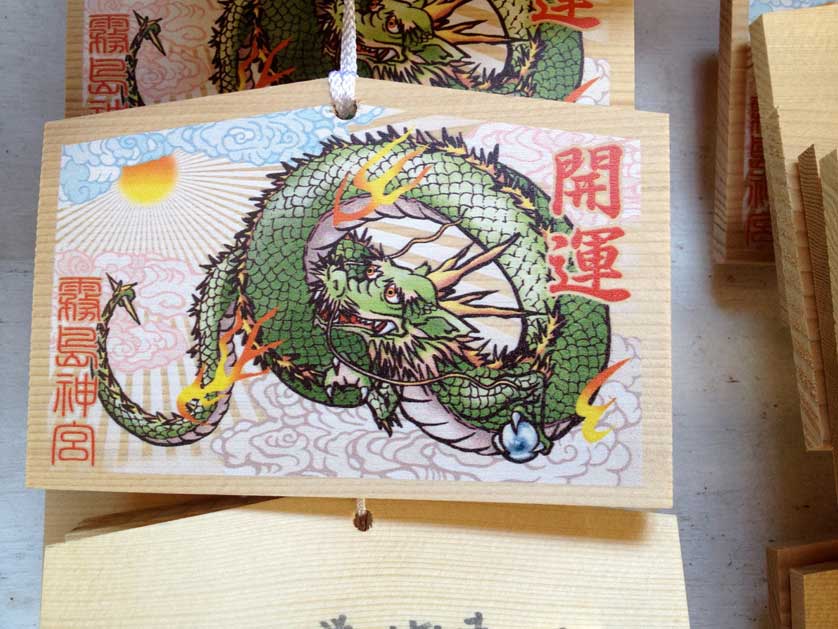