Samurai Sword: making a traditional samurai sword in Seki, Gifu Prefecture. Here in the Japanese city of Seki, north of Nagoya, the life of a sword smith's apprentice is a ritual of fearsome heat, hard labor and the unstinting pursuit of perfection.

Putting aside a decrepit set of bellows, the young kimono-clad man withdraws a hunk of superheated iron from the furnace. Placing it carefully on an anvil, he begins to hammer the red-hot metal, as an incandescent shower of sparks radiates low across the workshop floor. Here in the Japanese city of Seki, about 50 kilometres north of Nagoya, the life of a sword smith's apprentice is a ritual of fearsome heat, hard labour and the unstinting pursuit of perfection. 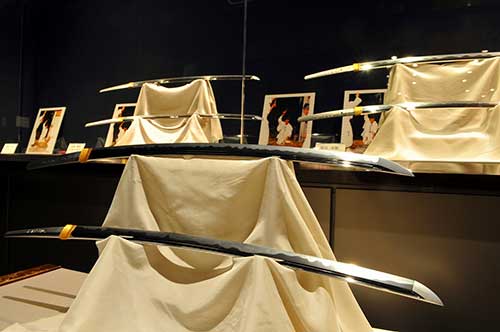 The Japanese sword (or katana) has acquired mystical significance in the wake of samurai history. From the medieval epics of Akira Kurosawa to the space operas of George Lucas, the weapon-bearing samurai has inspired countless generations with stories of honour, bravery, ruthlessness and unflinching self-sacrifice.

There are many Japanese who claim the samurai still represent the soul of their country, and that this soul lives on in the katana. On a more practical level, for those few involved in katana production today, the samurai blade embodies the supremely honed workmanship for which Japanese craftsmen are renowned across the world.

"Of the many types of iconic Japanese culture presented to foreigners, I believe the tradition of bladesmithing best represents Japan and the Japanese mentality," says Ken Yoshida, the fifty something master sword smith who oversees production at Kajita Token.

"Samurai sword manufacture is something uniquely Japanese. Involving some of the finest materials and tools in the world, it represents the very pinnacle of human craft." 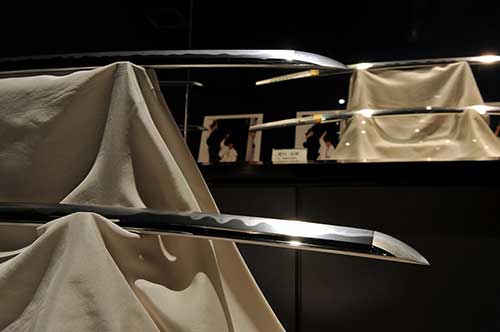 Each autumn an event called Hamono Matsuri - or the cutlery festival - is held in Seki. What, non-Japanese might reasonably ask, is so special about this small town that it needs to celebrate its cutlery manufacturing with a two-day extravaganza?

The answer is quite simple. For almost eight centuries Seki has been synonymous with one remarkable process: the crafting of the samurai sword.

Sword and blade-making of the highest quality first started in Seki as far back as the mid-thirteenth century. Endowed with mountain streams, abundant timber for charcoal and rich deposits of iron sand (a type of sand with heavy concentrations of iron)  - all essential ingredients for making high quality swords - the city attracted a master sword maker called Motoshige. He quickly developed Seki into Japan's preeminent centre of sword manufacturing.

"The level of blade craftsmanship in Seki soon became incredibly high," explains Ken Yoshida. "From this  city is was easy to source high quality materials and also to distribute swords around Japan."

At that time many Japanese sword craftsmen served and were protected by powerful military commanders. But the sword makers of Seki were fiercely independent, handling everything from the sourcing of materials and sword production right through to sales and the training of apprentices themselves.

"They vied with one another for the honour of producing swords so perfect that they would bear comparison with works of art,'" says Yoshida. "Warlords across Japan soon came to prize these blades highly, as the old Japanese saying: 'they neither break nor bend and cut marvelously well' indicates." 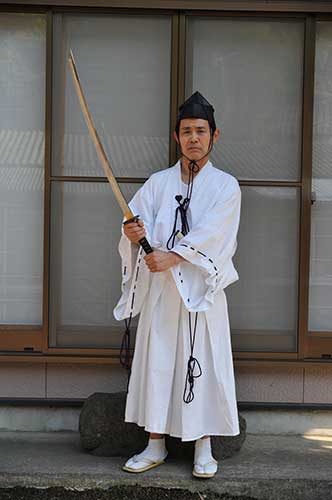 The power and autonomy enjoyed by Seki's sword makers saw more and more attracted to the area. At the city's sword making heyday, during the so-called Muromachi Era (mid-fourteenth to the late sixteenth century), it was home to more than 300 sword smiths.

But all things come to an end. As the age of Japan's feudal warlords finished, so the sword makers of Seki  became blacksmiths, producing blades suitable for homes and farms. In the second half of the nineteenth century western knives and scissors became known, and Seki's craftsmen yet again turned their skills to making new products for new markets.

Today there are only seven towns in Japan where samurai swords are still made - Seki remains the industry's undisputed capital - and the reasons for sword making have far more to do with art than war. Individual collectors who are interested in the work of certain smiths commission swords, and they are sometimes made for practitioners of martial arts. 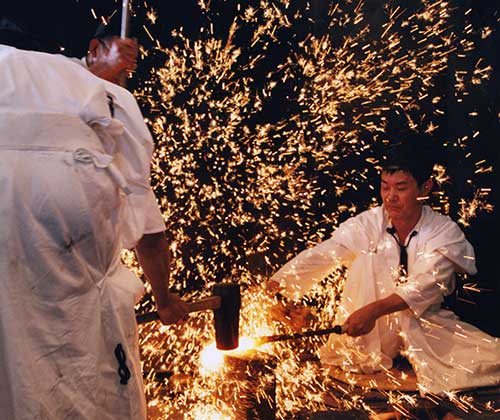 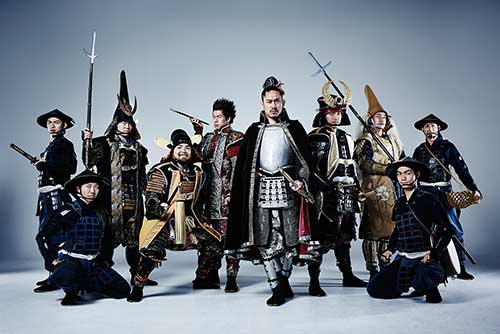 Since the days of old Japanese swords have been forged exclusively using a steel called tamahagane - created from iron sand and pine or chestnut tree charcoal - in a furnace called a tatara. To keep standards high and preserve traditional techniques, the creation of Japanese swords using modern iron ores is prohibited.

"The process by which swords are created is exceedingly complex," says Ken Yoshida. "It often takes a whole year to create a single sword, with roughly six months spent creating the blade itself, and another six months spent applying the finishing touches."

The sword making process begins with workers refining the iron-rich sand into chunks of iron ore by firing it in the tatara. After taking delivery of the refined ore, the smith then divides it - that containing less carbon is used for the body of the sword; the harder, more carbon-rich ore is retained for forging the edge. These pieces are melted down separately at 1300°C and made into a single slab of steel.

Apprentices are essential for performing the heavy labour of a sword forge - shovelling coal, preparing the fire, and beating the hot metal according to the smith's instructions. Both the smith and his apprentices take it in turns to fold, refold, lengthen, shape and temper the blade (some blades can have over 30,000 layers). Finally the blade is sent to the polisher, who gives the blade its sharpness and defines the tip, ridge line and other features.

"Sword making is not for the faint hearted," says Ken Yoshida. "On top of the burns, injuries and dirt, you may get three out of ten blades good enough to show. Despite the care and attention things rarely go as planned, but I wouldn't do any other job." 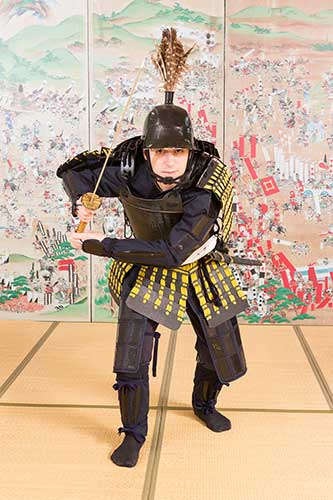 Aside from the katana themselves, the Kajita Token workshop is filled with ritual and tradition. As with many traditional Japanese craftsmen, Ken Yoshida works under a professional name, which is Kanehisa. He and his two full-time employees typically dress in white workman's clothes, though some of the details on Yoshida's kimono mark him out as master of the forge.

With its long hours, backbreaking labour and tightly regulated conditions, today the craft of swordsmithing is an incredibly niche occupation. Currently there are just 16 master sword smiths in Seki, and two apprentices. Under Japanese law, it takes five years of training under an established sword smith before an apprentice can begin to make his own katana.

"My own apprentice is now entering his fifth year," explains Yoshida. "His training is quite a burden, but I support him because it's vital that he carries on the sword making  tradition."

"Both my father and uncle were sword smiths, which meant I naturally entered the same world," he continues. "I have been involved in katana production for 40 years, and one day I hope my son will follow me into the same profession." 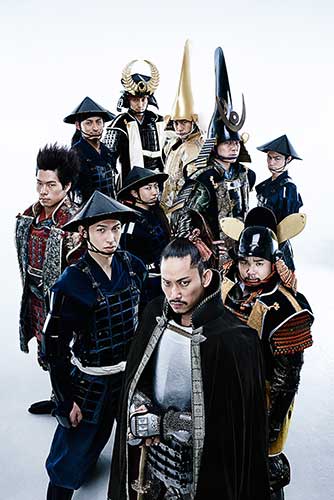 Those walking around the cities and towns of Japan today still encounter the samurai. His face and weapons appear on posters and billboards, on museum banners and comic book covers, and in shop windows celebrating Children's Day, a time for families to celebrate the health, vitality and inner warrior of their offspring.

"The samurai spirit is still rooted in the minds of many Japanese people," says Takatsugu Aoki, general manager of Nagoya's Omotenashi Bushotai, a cross between a samurai warrior squad and a boy band (although one of the members is currently female). "We saw this in the stoic behaviour of the people during the Great East Japan Earthquake in 2011."

The Nagoya Omotenashi Bushotai (literally the "Band of Good Looking Warrior Commanders") was formed in 2009. Currently comprising six bushos (army generals) and 4 jingasa (foot soldiers), they put on shows at the impressive Nagoya Castle every weekend, as well as conducting regular tours across Japan.

Today, for most Japanese, the samurai rests in peace, forever remembered as a legendary, heroic figure entwined in history. Once a fearsome weapon, the katana now exists as a work of art and a repository of great spiritual value. For the enduring sword smiths of Seki, their dedication to excellence is a credit to the samurai way of life. 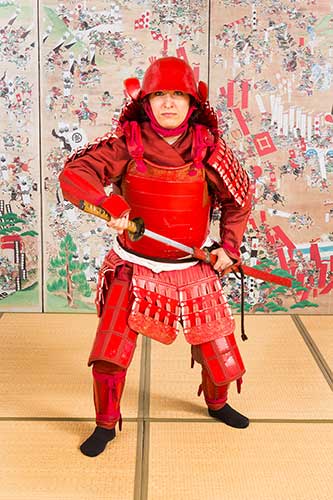 Ken Yoshida's workshop and forgery hold a number of regular swordsmithing-related activities for visitors. Forging and blade finishing can be witnessed live, and katana from different periods of Japanese history can be seen and held.www.kajita-token.com

Located around 60 kilometres north of Seki, the sleepy village of Sekigahara marks the spot where the greatest samurai battle of all time took place in 1600. There is a festival every October, while visits to the Folklore Museum and Sekigahara battlegrounds are also interesting. It's even possible to try on authentic suits of samurai armour!
www.kanko-sekigahara.jp/en 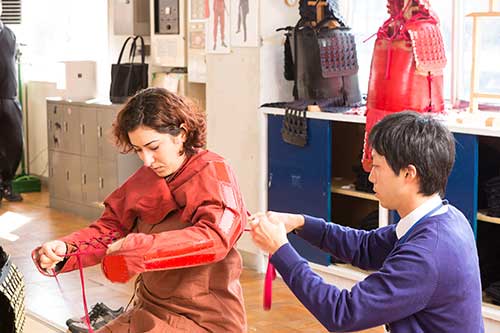 Make a samurai knife in Gifu at Asano Kajiya