Punk rock has been a big element of Japanese popular culture since the 1970s. This article looks at the history of homegrown punk rock in Japan.

Punk rock found a very ready audience in Japan in the 1970s and punk has been a fundamental element of Japanese youth culture ever since. Punk rock and its derivative scenes are still alive and well in 21st century Japan, particularly in the form of hardcore rock. 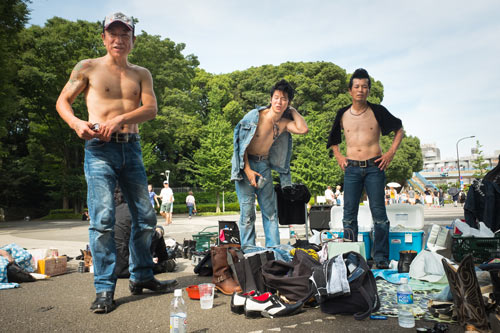 Of at least equal significance in Japan is the punk fashion movement associated with the Sex Pistols, which has had a profound influence on how Japanese youth present themselves, albeit as punk poseurs in many cases. Punk influence in fashion, inspired by the Sex Pistols, Malcolm Maclaren and Vivian Westwood, is still very much in evidence, for example, in Tokyo's Harajuku district.

Japan had something of a proto-punk scene, epitomized by groups such as Murahachibu ("Ostracism") and Zuno Keisatsu ("Brain Police").

Murahachibu formed in Kyoto and played in mainly the Kansai area (i.e., in and around Kyoto, Osaka and Kobe) in the early 1970s. Murahachibu was less about the music than whipping up the crowd; the language sung and shouted was characterized by so-called "discriminatory expressions" (the equivalent of expletives in English) and fights were known to break out. Maruhachibu was a precursor of the hardcore scene, now considered an offshoot of punk, that is still alive and well in Japan today.

Zuno Keisatsu was from the Kanto area (Tokyo and Saitama) and appeared in the middle of the often-violent student protest movement that rocked 1970s Japan. Zuno Keisatsu's music was explicitly anti-establishment and subject to government repression, such as concert venue entrances being blocked, and a ban on its first album.

The advent of punk in the US and the UK from around the mid-1970s revolutionized the Japanese rock music scene, boosting the existing alternative rock scene in Japan and inspiring the creation of numerous more punk bands and labels. Alternative rock pioneers - even if not self-proclaimed punk rockers - Friction, appeared in 1978 from out of a band formed in 1971. The Tokyo Rockers also formed in the late 1970s in Roppongi in Tokyo, as did Supermilk in Kyoto, who opened for the Stranglers' tour of Japan.

The punk scene in Japan during the 1980s was generally small and localized, with the only nationwide information available being in the form of the alternative music magazine, Doll (1980-2009).

Anarchy was probably Japan's first recognizable punk band, formed in a housing estate in Saitama prefecture in 1978 and catapulted to fame by winning the Yamaha amateur musicians' contest "East West" in 1979. Lyrics included in their first album ridiculed Japanese Imperial family, resulting in protests by Japanese right-wingers outside the headquarters of their label, Invitation (owned by JVC).

The Stalin was another prominent Japanese punk band that colored the definition of punk in the Japanese media with extreme behavior that included throwing firecrackers and animal entrails into the audience, and even even X-rated onstage antics.

The late 1980s music scene in Japan saw an indies boom, with Takarajima ("Treasure Island") magazine as its mouthpiece, and typified by bands like Laughin' Nose, the Willard and the Yuchoten ("Ecstasy"). During this time, punk in Japan gave rise to a variety of styles that burgeoned into an indies scene and saw the beginnings of glam-rock-influenced "visual kei" and of noise.

Other bands such as Cobra, the Jun Sky Walkers, Kenzi and the Trips, Neurotica, and Pogo fused the aggressive punk performance style with poppy melodies. A band called the Blue Hearts came to dominate this scene from 1987 with innocently youthful lyrics to a punk rock sound.

At the same time, the US-style hardcore scene was alive and well in Japan, even if it was not as popular as the sound of bands like the Blue Hearts. Japanese hardcore bands that achieved strong followings include Lip Cream, S.O.B. (grindcore), Japan's skate core pioneers Rose Rose (hardcore/thrash metal), G.I.S.M. (hardcore/heavy metal), and Gastunk (metal core). The Japanese live house scene in the late 1980s was marked by fierce rivalry between heavy metal and hardcore fans, with fights regularly breaking out if schedules happened to bring them together.

The 1990s saw even more ramification of styles, with melodic hardcore (Brahman, Hi-Standard, Husking Bee) and ska core (Kemuri, Potshot, Snail Ramp) in particular gaining popularity. The "emotional hardcore" scene also got off the ground in the 90s with bands like Bloodthirsty Butchers and Eastern Youth.

The final year of the 20th century saw the Okinawa punk band Mongol800's album "Message" reach No.1 on the Oricon Album Chart, making the band the first indies musicians in Japan to sell over 1 million albums.

The 21st century saw a youth punk boom with the appearance of groups like GaGaGaSP, Going Steady and the Stance Punks, their fans made up mainly of junior and senior high school age youth. The plethora of rock festivals that took off in the 21st century include a strong punk rock presence, such as bands like Ellegarden, 10-Feet and Maximum the Hormone.

Now, four decades since the advent of punk, the sound is still alive and well at live houses and festivals throughout Japan. The main magazine for punk rock in Japan now is Bollocks, published every two months, and the main online punk presence is gekirock.com.

However, maybe because the punk revolution so pre-dated the internet, there is not that much online about punk in Japan. The best thing is to visit a few record stores, pick up a few pamphlets, then get go along to that cramped little venue and pogo!

Read about music festivals in Japan.

Note: This article is based on the Japanese Wikipedia article on Japanese punk rock.