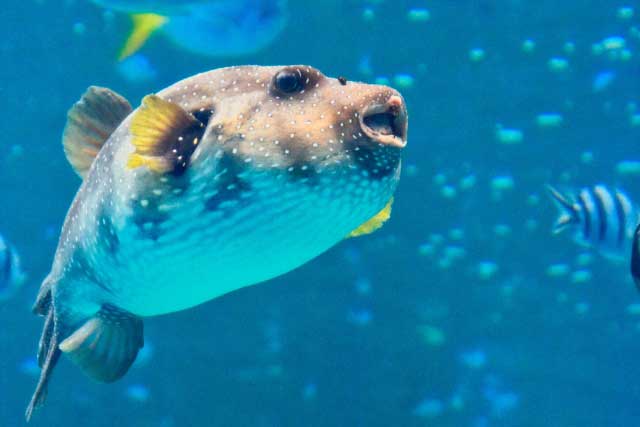 Will Yong survived a blowfish dinner

I was on my way to dinner and I was wondering if it might be my last.

We were off to eat fugu, to my mind the hardest to understand of all Japan's weird and wonderful culinary traditions. And one that appears to be in no danger of dying out - New York and Hong Kong now import this potentially deadly fish. So at the same time as feeling a little concerned for my well-being, I was not a little bit curious to know what all the fuss was about. 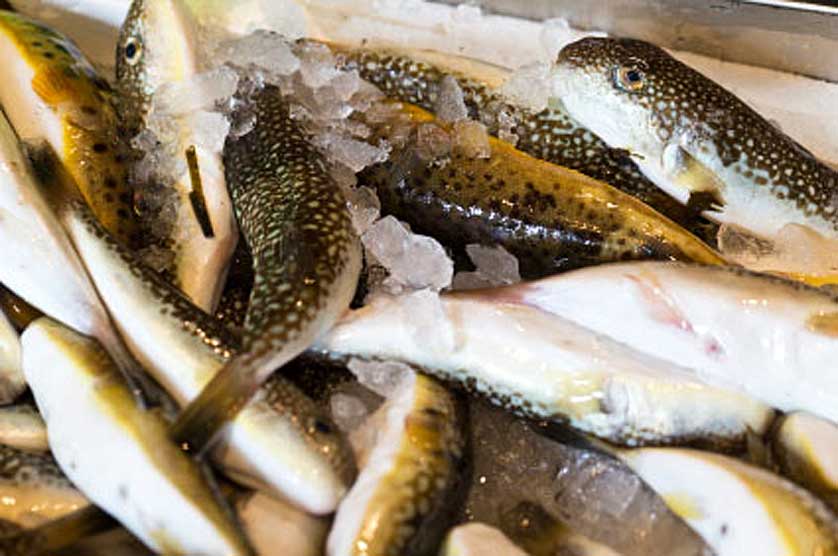 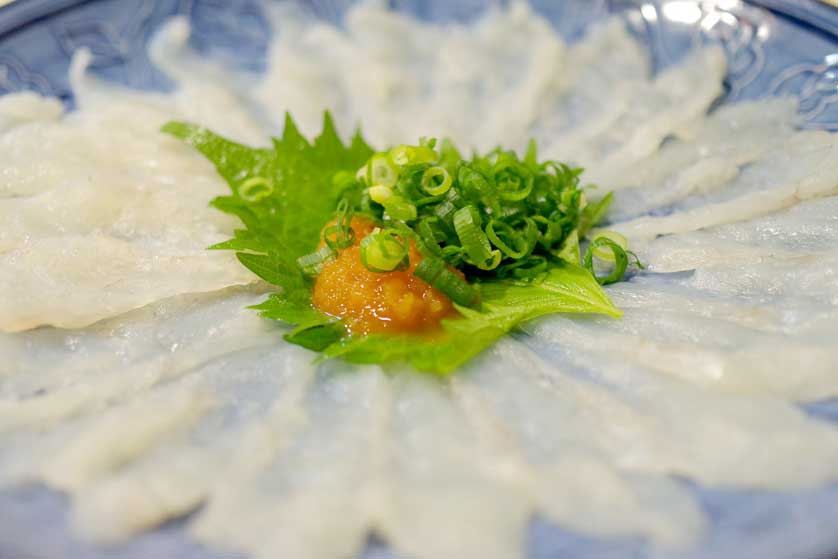 "Don't a small number of people still die from fugu poisoning every year?" I asked, betraying my trepidation. "Yes", my friend explained to me with a broad smile - a smile which I carefully examined for any hint of a death wish - "but they are just the kamikazes."

The fact is, that the fugu fish is one of the very least appetising of marine morsels. When in danger, it puffs itself up into a hardly palatable and, in some species, spiny, balloon shape. But the knockout punch is a poisonous chemical called tetrodoxin found in its skin, blood, ovaries and especially its liver.

This is a toxin that makes cyanide look like Aspirin - one match-head worth can kill thousands. Just touching a fugu the wrong way can be deadly and, appropriately, our multi-course feast started with a salad made with the skin.

These days, what comes between you and the most dangerous animal anyone in the world takes the trouble to eat, is hundreds of years of tradition and experience. The delicate cuts that are required to render the fugu, or blowfish, edible are performed only by experts who undertake rigorous training in the art.

How many died in the name of research, no one has yet been able to tell me but current legislation requires aspiring fugu chefs to train for three years and take numerous exams before being allowed to test their prowess on the general public. The final hurdle is to eat their own examination work and only 30% make the grade. Wondering about the other 70%, and remembering some of the nonsense I wrote in exams over the years, I'm glad that my history essays were never a matter of life or death.

Next came the sashimi. Delicate leaves of translucent pale grey flesh arranged in the shape of a chrysanthemum - a flower that the Japanese associate with death. The experience in the mouth, like so many other Japanese foods is not just about the flavour but about the texture too. I was told that fugu flesh was "shiko shiko", one of the numerous double-barreled descriptive turns of phrase in Japanese that seem to get their meanings across just from the sounds of the words. Fugu, when absolutely fresh - and the fish are usually kept alive in the restaurant's tanks to make sure of this - is a cross between crunchy and chewy. Perhaps the "shi" is for the chew and the "ko" is for the crunch, the whole thing repeated for emphasis. The word seemed to sum it up nicely.

So why the kamikazes?

Most reports of fatal fugu poisoning concern fishermen who, having had the fortune to catch a fugu, lacked the foresight to throw it back. They attempt to "sashimi" the fish themselves and pay the ultimate price. Not, however, before experiencing a numbing of the lips and tongue, a growing paralysis of the body, headaches, gastric pain, vomiting and convulsions. It's not all bad though, you do get the consolation of a light and floaty feeling. After 4-6 hours of this, death occurs. There is no known antidote. 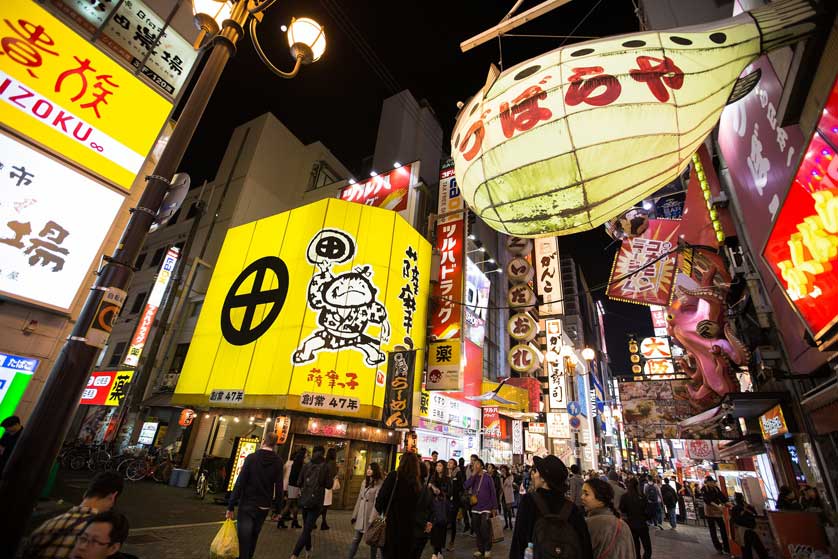 Techiri, the centrepiece of any fugu meal, was up next. Already at our table was a bubbling pot of water seasoned with a leathery piece of kelp. Though clearly made from paper sitting in a metal basket, it stood up to the heat and liquid remarkably well. Raw chunks of fugu were served for dropping into the stock but not before they twitched rather unnervingly, as if summoning up the effort to piece themselves back together. For a moment I thought that, rather than poison me, it might leap off the plate, dive down my throat and choke me to death.

So this was fugu. A fish that aficionados pay hundreds of dollars to eat. Was the flavour anything special? Not to my mind. It was a little richer than other white fish I had eaten and it was pleasantly meaty but an electrifying new flavour sensation, sadly, it was not.

Experienced fugu chefs in the most expensive of restaurants sometimes leave enough poison in the flesh of the fish to give diners a little numbness around the lips - showing them just how close they are getting. True connoisseurs go for hot sake mixed with a teaspoon of the fugu's testes, one of its most poisonous organs. They say it gives you a buzz and acts as an aphrodisiac, perhaps because of a renewed interest in life after consuming it. We stuck to hirezake a kind of tea made by brewing up toasted fugu fins with hot sake. An acquired taste if ever there was one.

But could it be that the poison is part of the attraction? Is fugu the "extreme sport" of the culinary world? Perhaps for some. But if all this sounds like dicing with death to you, then it may be a relief to know that the dice are loaded in your favour. Most fugu these days are of a farmed variety that produce only small amounts of tetrodoxin. They're pretty much benign and, as a consequence, much less of a story to tell the folks back home. No one told me this before my introduction to fugu and, looking back on it, I'm glad that my first experience was an uneasy one. 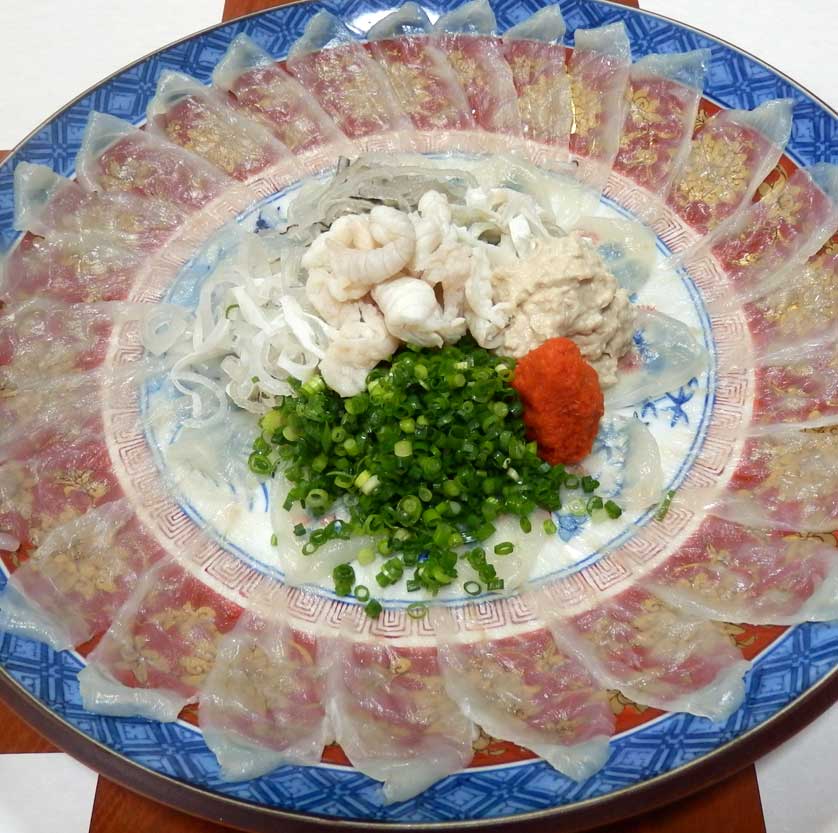 A Taste of Japan

Fugu. Information on fugu (blowfish) a poisonous fish eaten as a delicacy in Japanese restaurants.