Jigoku Mushi: Cooking with the Steam from Hell 鉄輪 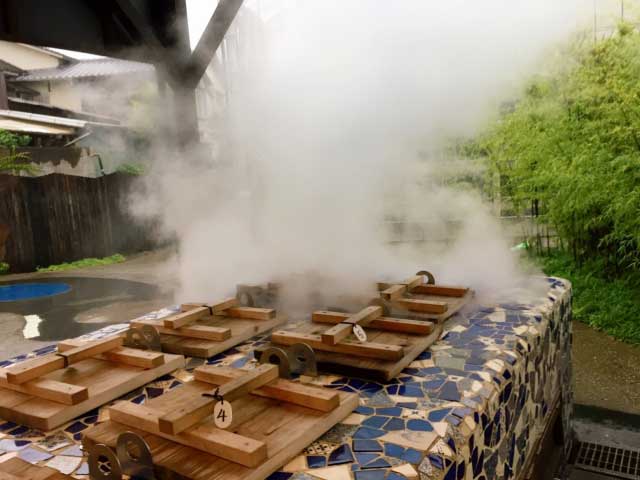 The Kannawa section of Beppu is famous for its hot spring steam jetting out at countless spots and impressively wafting over the area.

The steam and hot spring water reach the surface at boiling temperatures. There are numerous boiling ponds, called jigoku (hells) and they are the main tourist attractions. For the hot spring baths, the water has to be cooled down to a suitable temperature.

Given such an abundance of hot steam and water, it's no surprise that a very special local cuisine developed: jigoku mushi (hell steamed). Dating back to the times before the Edo era (1603 - 1868), this cooking method is currently undergoing a great revival in Kannawa.

Visitors usually first encounter it in its most basic form out on the street close to the "hells". There, restaurants and shops have their hot steam set-ups out front: stone or concrete cooking spots called jigokugama (hell pots) into which steam is piped from below. Into the cooking spots, bamboo baskets filled with eggs, sweet potatoes or ears of corn are placed. You can buy the boiled products right there for a few yen. It's very tasty as the steam is loaded with minerals giving a very distinct flavor.

Another specialty sold to passers-by are the Kannawa butaman. Those are pork-filled steamed dumplings, steamed in hot spring steam, of course. They are made by a little store producing nothing but the dumplings. To find the store, walk down Ideyu-zaka (the main street of Lower Kannawa) and turn left at the Youkousou Inn. 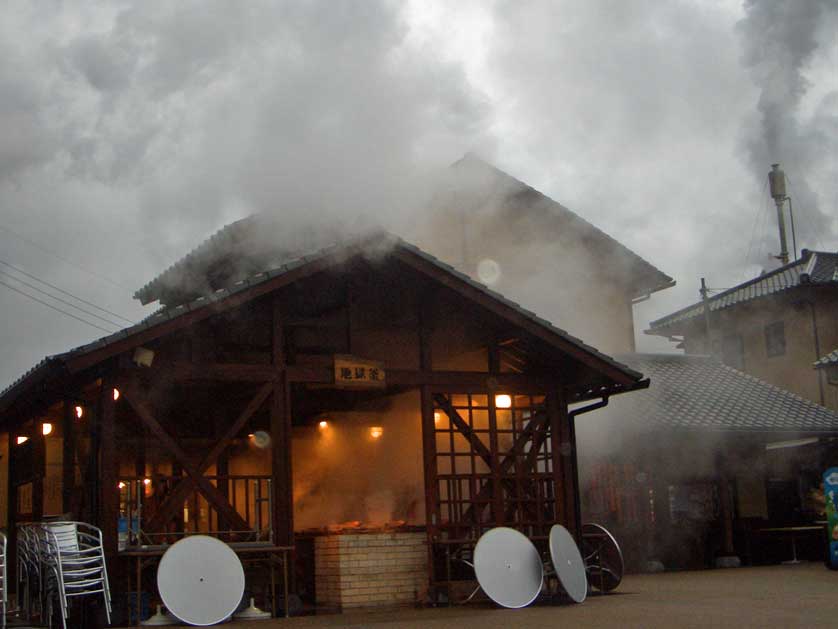 Originally a Chinese dish, the dumpling is known in Tokyo as nikkuman. Nikku means "meat" and pork was the most popular meat in Tokyo. In Kyushu however, beef used to be the common meat, therefore it is called butaman here - buta meaning "pork".

Right next to the butaman place is a little private grocery store. The old couple running it steam eggs, sweet potatoes and ears of corn, the traditional combination. Across the lane is a little bench. Sitting down there with a bottle of cold tea, a butaman and steamed eggs is - almost too perfect.

Whenever Japanese TV stations do a travelogue on Kannawa, you see the on-screen travel guides sitting down with exactly that combination of food on exactly that bench.

In fact, those TV reports don't exaggerate in any way. It's a very quiet little lane, steam is wafting out here and there and the food is absolutely fitting of the traditions of area. 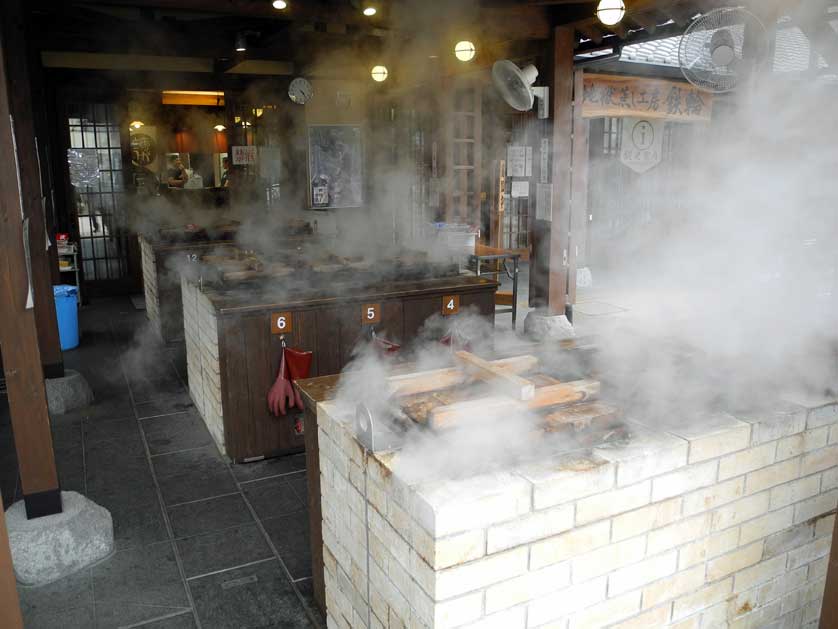 It gets however even more interesting if you try out the recently opened Jigoku Mushi Kobo on the upper end of Ideyu-zaka. There, you can operate the steam cookers all by yourself and you can cook whatever you want.

The place is operated by Beppu City as a part of its program to revive old hot spring culture. It is staffed by volunteers and it has a bit of a youth-hostel like feeling to it. But it's absolutely worth trying out.

The best way to enjoy Jigoku Mushi Kobo is to go there first and pick up one of their flyers. They spell out which food is suitable for the steam cooker and how long it takes to steam it. The latter is very important.

As you will have to operate the cookers yourself, you want to make sure that either all the food you want to eat is ready at the same time or, more recommended, that the various dishes are cooked within a reasonable time span from each other, allowing for the relaxed enjoyment of a multi-course meal. What you certainly don't want to do is to get up from your meal every three minutes to deal with the next dish. 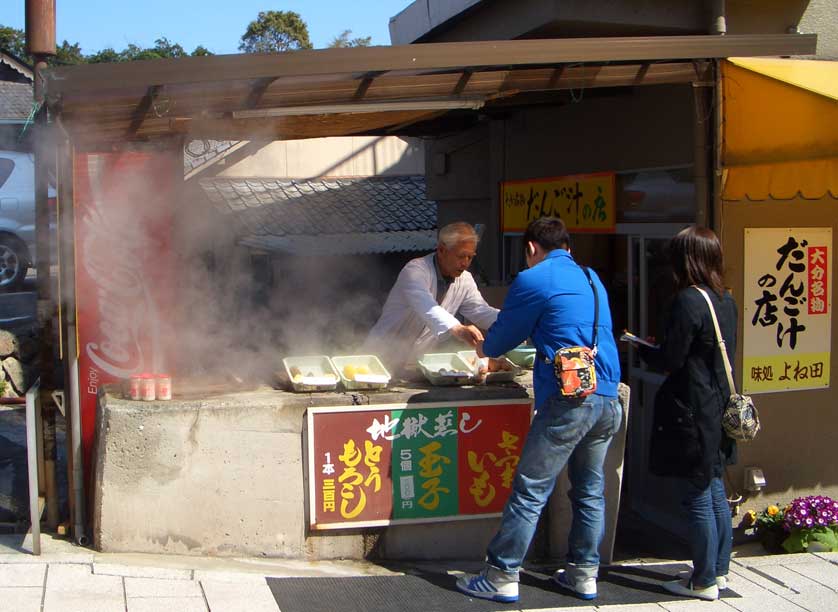 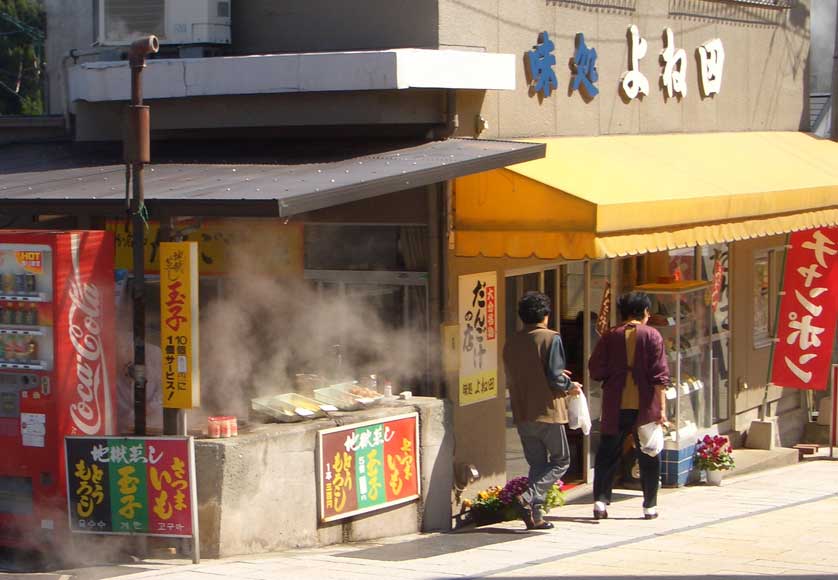 Armed with the knowledge of what to cook, you either walk to the big Marushoku supermarket about 10 mins away (cheap and lots of variety) or go to the stores just across the street specifically set up to provide for the Jigoku Mushi Kobo (more expensive, less variety).

Vegetables of all kinds are quick to cook, potatoes take a bit longer. Rice is rather difficult and maybe not a good choice for someone trying the steam cookers for the first time. Fish is great, as are shellfish and shrimps.

The cooking time for all of them ranges between a few minutes and about half an hour. Meat takes a much longer time.

When you then arrive with your purchases at the Jigoku Mushi Kobo, you first have to buy tickets for the use of the steam cookers, the jigokugama, from a vending machine. It's all labeled in English and there are always volunteers ready to help.

Next, you hand your purchases over to the staff behind the counter. While you watch, they cut it all into pieces fit for the steamer and place it into various bamboo baskets. They will tell you again how long to cook it.

A volunteer will then take you to the cookers. Take your glasses off before opening the cooker lid - otherwise you won't see anything. Hot steam jets out ferociously. Use gloves and the supplied tools to place the baskets with your food into the steam. Remember the time. Though the staff may remind you that your food should be ready after the prescribed time, don't count on it. They can get busy sometimes. 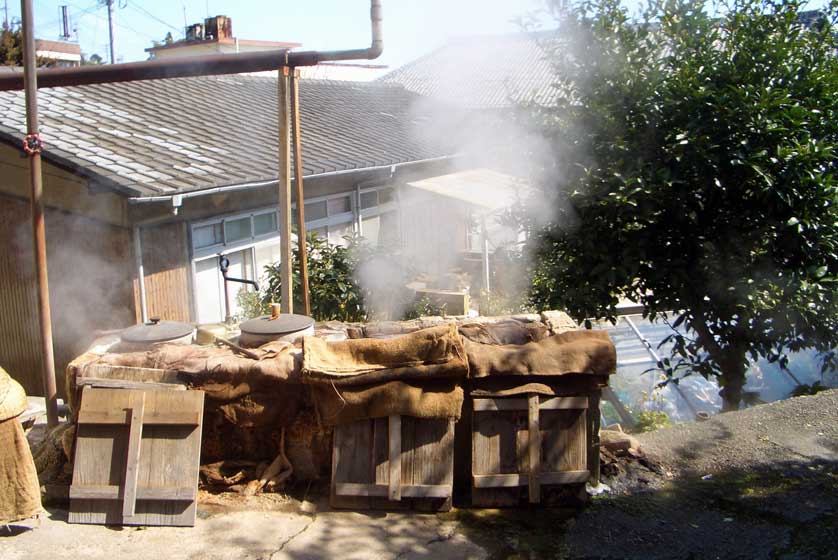 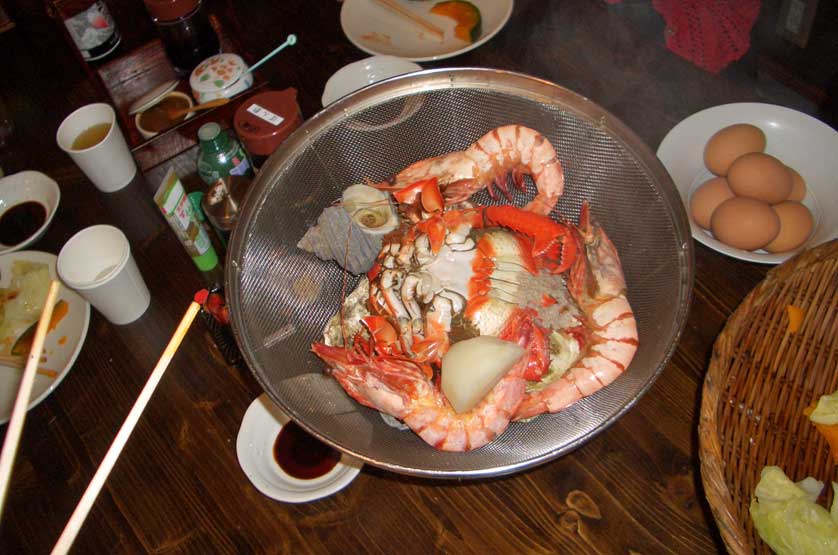 There are tables both outside and inside Jigoku Mushi Kobo. Outside, there is a well with very strong hot mineral-heavy water. It almost tastes like soup. It's a great drink. Tea is also offered. Beer is not. In fact, alcohol is prohibited on the premises. That's too bad but obviously, nobody wants to have someone drunk run around those hot steam places - there are many next to each other and they can be rather dangerous if handled incorrectly.

Plates, chopsticks, forks, etc. are readily available. Just pick them up. When your first dish is ready, take it out of the cooker. Usually, a volunteer will assist you.

The food resulting from all those efforts is, if done correctly, very delicious and very unique. Those minerals in the steam just give it that special edge that you can find nowhere else.

As Jigoku Mushi Kobo is volunteer-run, you will have to rinse your dishes after the meal. 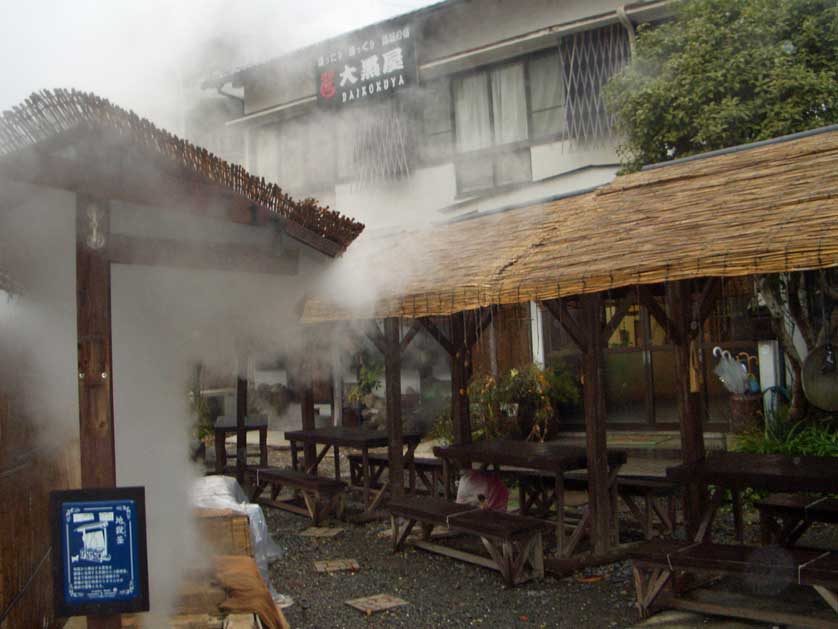 Cooking at the ryokan

While the Jigoku Mushi Kobo is new, the ryokan in the area have kept alive hell-steam cooking in the long term. The best place, perhaps, to enjoy old-style jigoku mushi cooking is the Daikokuya Inn, hidden in the deepest depths of steamy old Kannawa.

You don't have to be a staying guest of the inn to enjoy a meal there. The cooking facilities are outdoors and you can book the cooking spot in the garden by phone (in Japanese). The cooking itself works the same way as at the Jigoku Mushi Kobo. Buy the food yourself and be sure to take your dishes out of the cooker at the right time.

Daikokuya Inn is private. It has roofed benches to sit down at, it has only a few cookers and the atmosphere is much more relaxed. Here you can enjoy a jigoku mushi meal the way it was originally intended to be: freely drinking beer and sake with your friends, occasionally looking after the cooker, eating delicious things from time to time, smoking cigarettes whenever you desire to, in short, here you can experience the real Kannawa way of a good old-fashioned hell-cooker party. 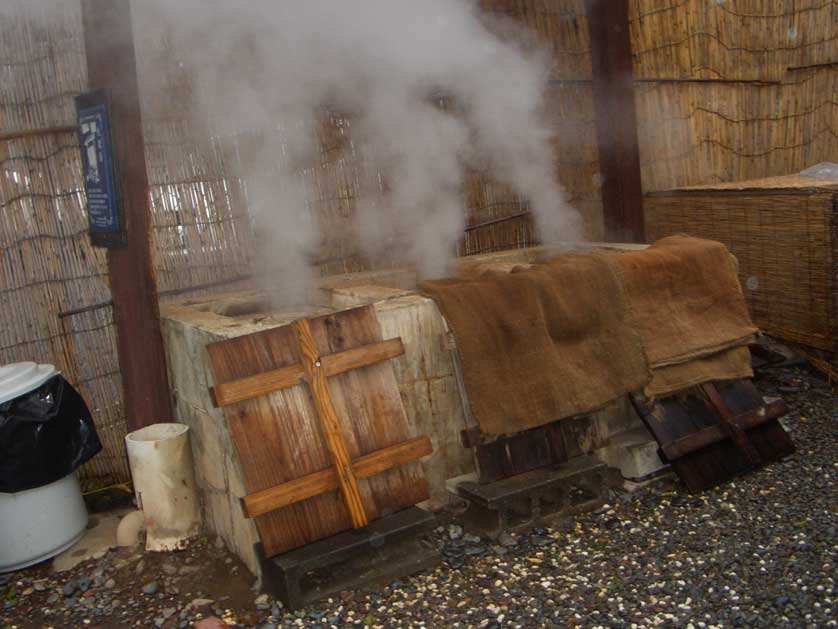 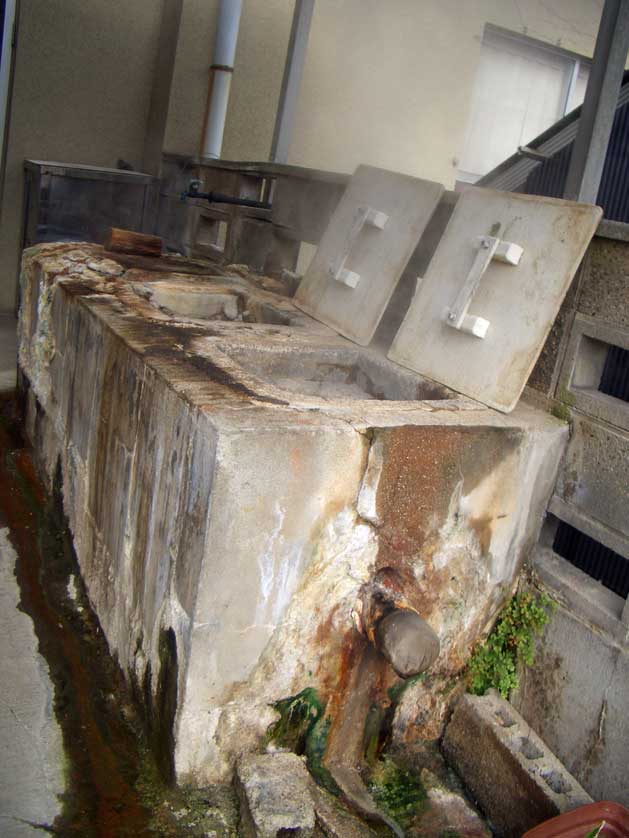 Kannawa is about 25 minutes by bus from Beppu Station. Both the Kamenoi and the Oita Kotsu bus companies operate several lines to Kannawa.

Kannawa has plenty of big hotels along the Kyushu Odan Doro (Cross Kyushu Highway) and in upper Kannawa. There are lots of traditional Japanese ryokan in lower Kannawa, with prices starting at about 3000 yen per person per night.

Staying at a small ryokan will give you the true Kannawa experience - but be prepared to negotiate your stay in (basic) Japanese.

The Hyotan Onsen has an English language website with a map giving a good first overview of Kannawa.

Preparing Jigokumushi food by yourself:
Daikokuya Ryokan, Tel: 0977 66 2301 (in Japanese only), website in Japanese 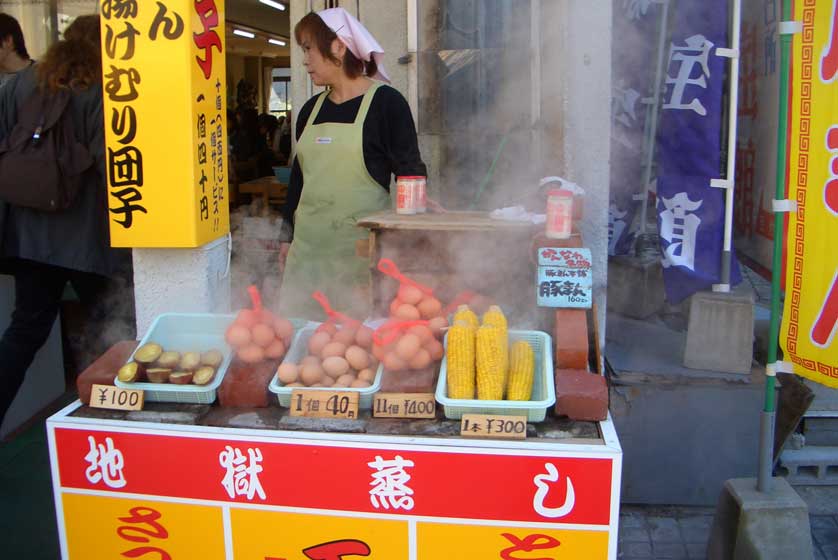