Sasebo Burgers: read about Sasebo Burgers which started in the 1950s outside the US Navy base in Sasebo, Kyushu and have become a national food phenomenon. 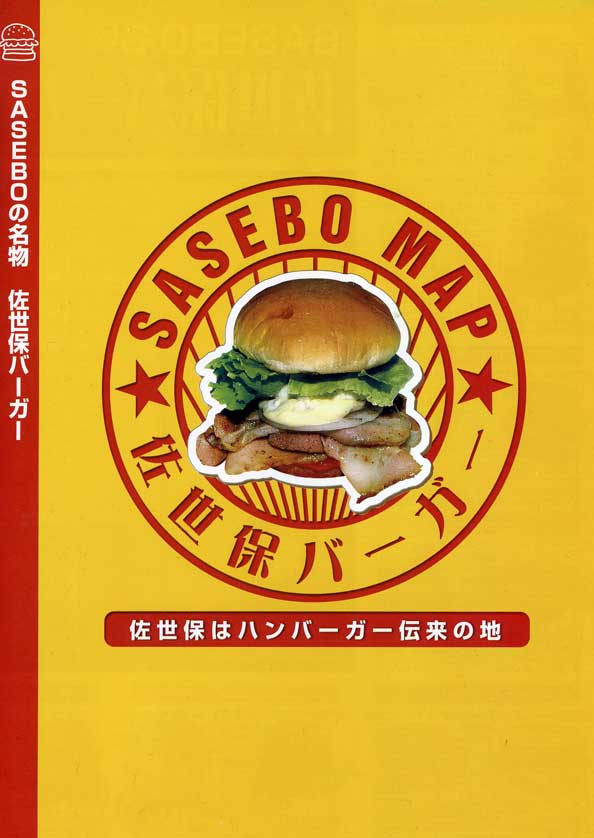 To a lot of Europeans this may be news, but to Americans it certainly isn't: a hamburger is not necessarily a quick bite of fast food purchased at an international chain outlet.

A real burger is a giant dish prepared by hand by an experienced cook and made after you order it. You need to sit down and wait for it and if you are lucky you can do so in the beautiful environs of an old silver diner from the 1940's, which hasn't changed its appearance in the subsequent decades.

The Real Burger Comes to Japan

In Japan, the international chains dominate and then there are a number of Japanese chains offering variations geared specifically to local tastes with treats like Teriyaki Chicken Burger. They may be better than a bland BigMac but still, it's chain store fast food.

Here is the good news: delightful, handmade burgers are being served in Japan, they cost 500 yen each and they have a tradition going back more than 50 years. To enjoy them, you will have to travel a bit, though.

Their home is Sasebo, a small town with a big American Navy base on the western coast of Kyushu, about an hour and a half by train southwest of Fukuoka and 88 minutes from Nagasaki.

Don't expect the same as those back in that gloriously greasy diner back home, like, say, the Great Jones Diner in the New York City downtown of yore. The burgers in Sasebo have been reworked and modified by generations of Japanese cooks, and actually, they succeeded in making them all the more tasty, though certainly not less greasy.

There are about 20 places now which are officially certified by the city as serving original Sasebo Burgers. Most of them you find in a free map available at the train station, at hotels, convenience stores and gas stations. Pick one up - it's very helpful even if you can't read Japanese.

For a good start, you may want to head over to the Hikari burger joint on International Avenue. That's the camphor-tree lined avenue connecting the city to the U.S. Navy base.

The Hikari is one of the oldest and yet one of the most innovative burger restaurants in town. Hikari is famous for its burgers made of minced chicken meat, coming in a jumbo size. Now, jumbo size means here really jumbo size. Big delicious buns and the stuffing is more than generous: slabs of fried, ground chicken meat combined with an omelet, bacon, various vegetable layers and a weirdly sweet mayonaise. Maybe a tad too sweet - but it goes down beautifully with a large cup of black coffee.

The Hikari burger joint has only 7 seats inside but not many people bother about those. They wait outside to be called by a loudspeaker in the large parking lot in front. You get a number handed to you when placing your order. The lot is permanently crammed with cars bearing license plates from as far away as Kitakyushu, Fukuoka, Kumamoto, Nagasaki and other places that require long-distance travel to get here. Obviously, the Hikari burgers hit the center of burger-craving Japanese taste buds.

Yours as well? Go and find out. In any case, you will be stuffed after the meal. To relax, take a walk down International Avenue, leading through fenced-off residential areas where the families of the marines stationed down at the end of the road live. You are right in the center of Sasebo burger history here. 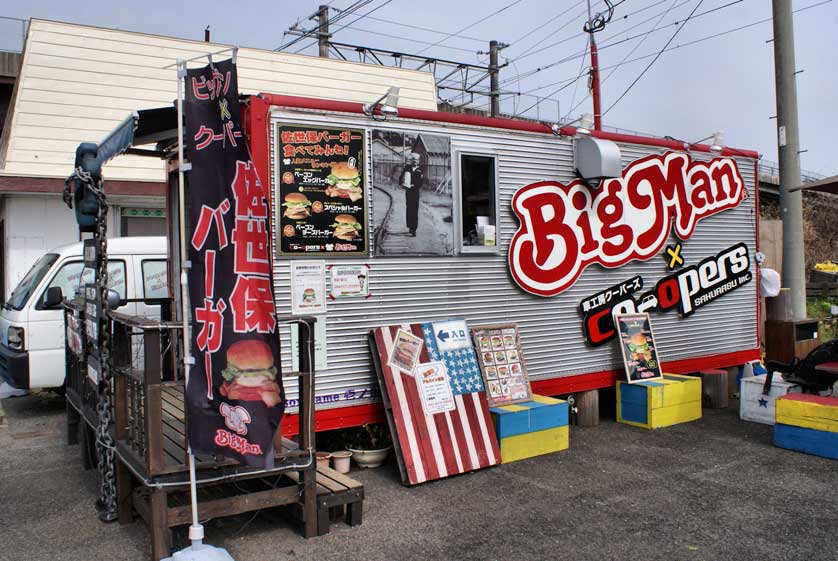 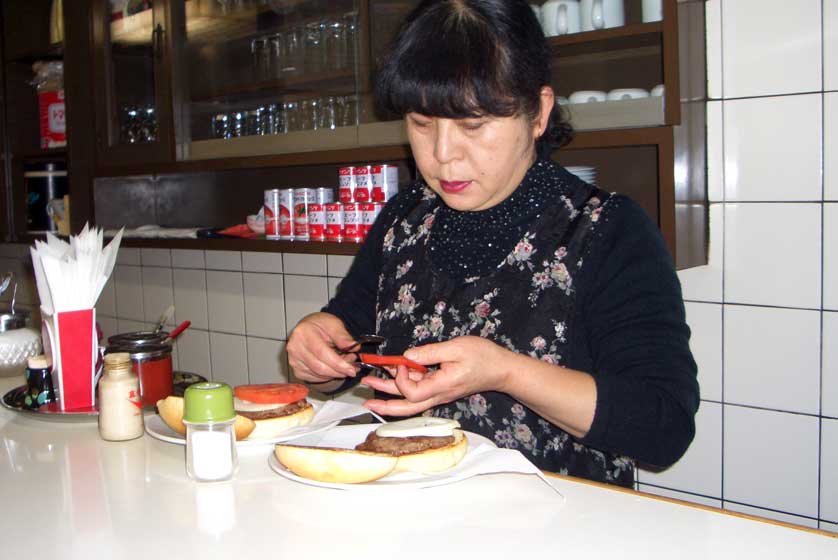 Sasebo has been a major Navy base town since 1889. At first, of course, it was the Meiji era Japanese fleet operating out of Sasebo. After World War II, the U.S. Navy took over a good part of the old Japanese facilities.

U.S. Marines and the Sasebo Burger

Soon, hungry marines strolled out into the city on their breaks from fighting in the Korean War. Hungry for hookers for sure, but they were certainly pleased when they discovered that the locals also adapted to their culinary needs. In the early 1950's, the first burger joints opened in the town. McDonald's, in contrast, started their first Japanese outlet in Tokyo's Ginza district only in 1971.

Pondering this, you might have already arrived at the end of the rather short avenue running through the town of Sasebo. Actually, you wouldn't know it, but after crossing a wide intersection, the avenue continues. On the traffic island on the other side of the intersection is a strange gold-painted torii, a gate resembling the ones you find in front of a Japanese shinto shrine. Only that here a big round sign hangs inside the torii, announcing "7th Fleet Activity". It's quite a bizarre sight. But snap your picture quickly and vanish into thin air.

This is actually the entrance to the US Navy base in Sasebo and the folks in there haven't got much of a sense of humor. If you are just walking around leisurely after taking a shot, you will be stopped, interrogated and the info on your I.D. card will be written down on a list of similar "offenders" - as happened to me.

Eventually, I was forced to delete the photos from my digital camera. "We can't have anyone taking any pictures of the base at all," I was lectured. A very clever move to reach out to locals and visitors, indeed.

In fact, the Navy has very little to do with the current burgeoning of the burger business. The obasan ("middle-aged woman") who runs the city's oldest surviving burger joint, Buru Sukai (i.e., Blue Sky but the name is displayed only in katakana letters), remembers the old times:"We opened in 1953," she said, "and for the first 20 years, our customers were mostly Americans from the base. After that, the foreigners stayed away but more and more Japanese came." 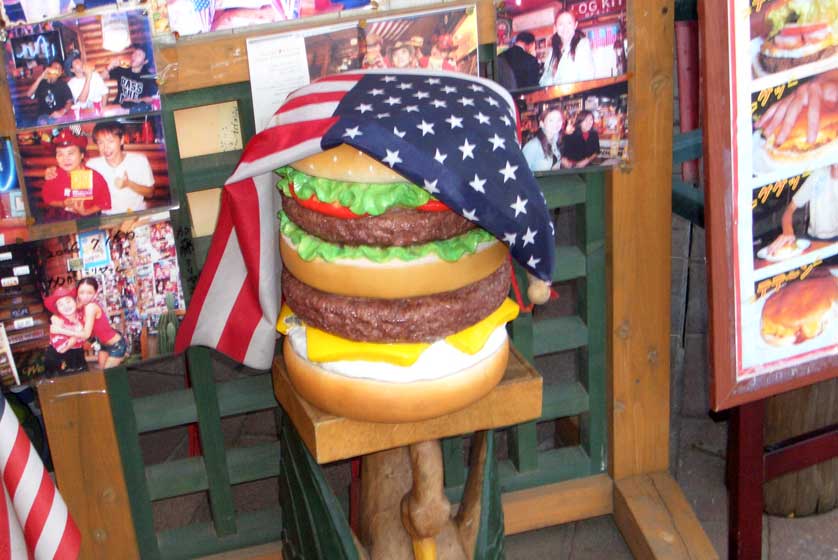 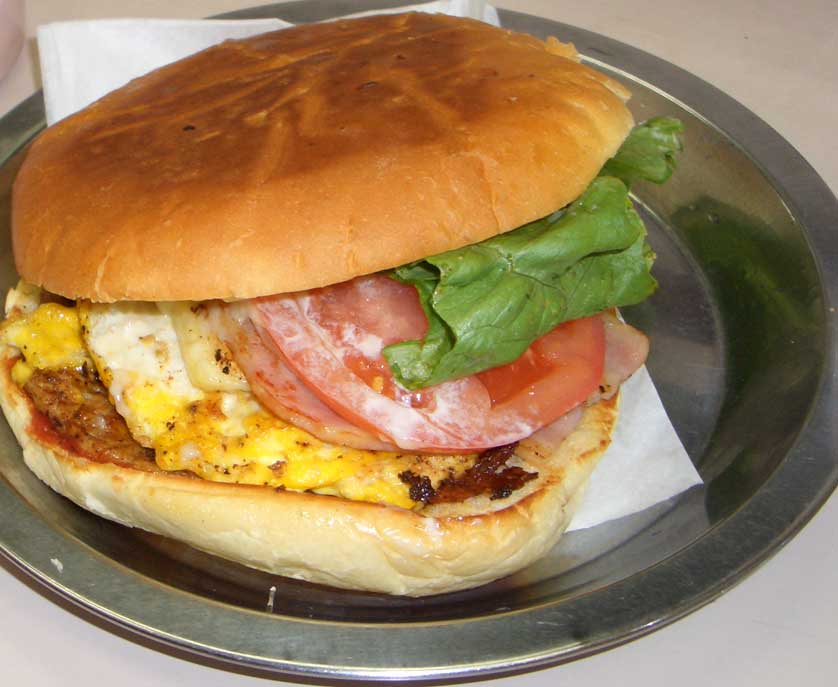 In her tiny shop, which is open only at night, the menu is in Japanese only - similarly with all other burger joints in town. They use almost exclusively katakana Japanese to name their dishes, rendering American expressions in Japanese letters. But none of the places visited provides an English menu. For whom anyway? Almost no American ventures downtown these days - at least almost none can be seen on the streets.

The burger the obasan prepared right in front of her customers at the Blue Sky was of a much humbler size than the one at the Hikari, but it was filling, nonetheless, if treated as a second helping to what you've just enjoyed at Blue Sky. She serves her burgers upside down - easier to eat that way, she said. Plenty of minced beef and vegetables in there - and she was right: the way she served it, it was rather easy to handle.

Easy to handle is not something you could say about the giant jumbos served at the Big Man, Sasebo's most famous burger joint. The Big Man burgers come the closest to delicious old American handmade grease-burgers. They are a mess to eat - and they shoot you right to burger heaven.

Big Man is actually a tiny shop, 10 seats, and you may have to wait a bit - but nobody minds. Plenty of people linger outside at any time of the day, for a half an hour or so. That's nothing compared to the time you have to wait for your food at their outlet in Tokyo's Ikebukuro district according to newpaper reports - there, patient Tokyoite hamburger aficionados line up for three hours to get their bite.

It was this Tokyo outlet, opened in 2005, that put the Sasebo Burger on the national map. The Japanese press went crazy about the Sasebo burger, suddenly discovering a food which had been just a local specialty in a remote town.

The result is that Sasebo now promotes itself as "Burger Town" and plenty of new burger joints are opening. "If it says Sasebo Burger in some place's advertising, it means that they are new," the lady from the Buru Sukai commented dryly.

Old timers like her are too proud to jump on the town's latest promotional bandwagon. They are just happy to serve the best burgers in the country - and they are doing well without the hype. 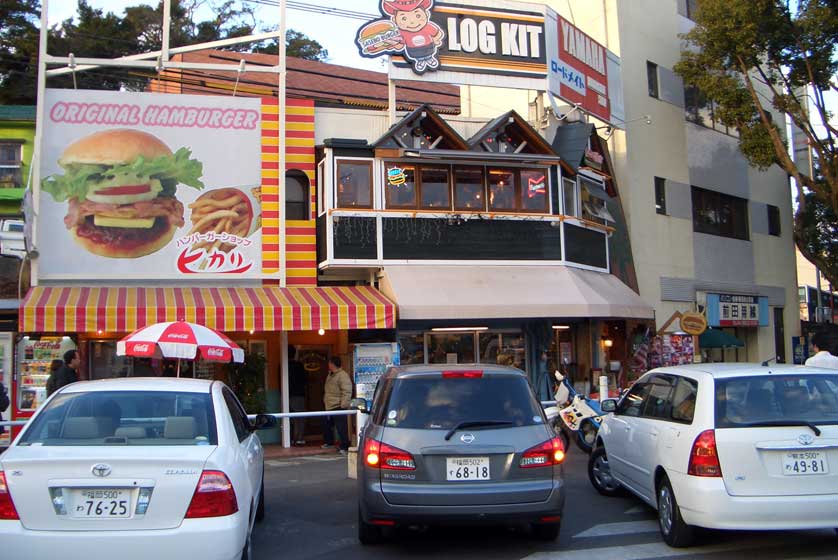 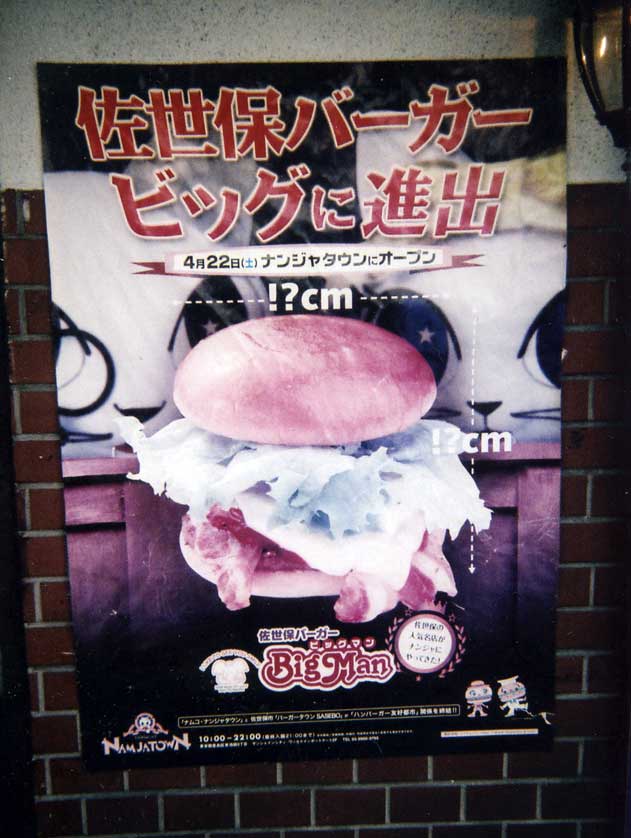 The views expressed in this article are solely those of the author. 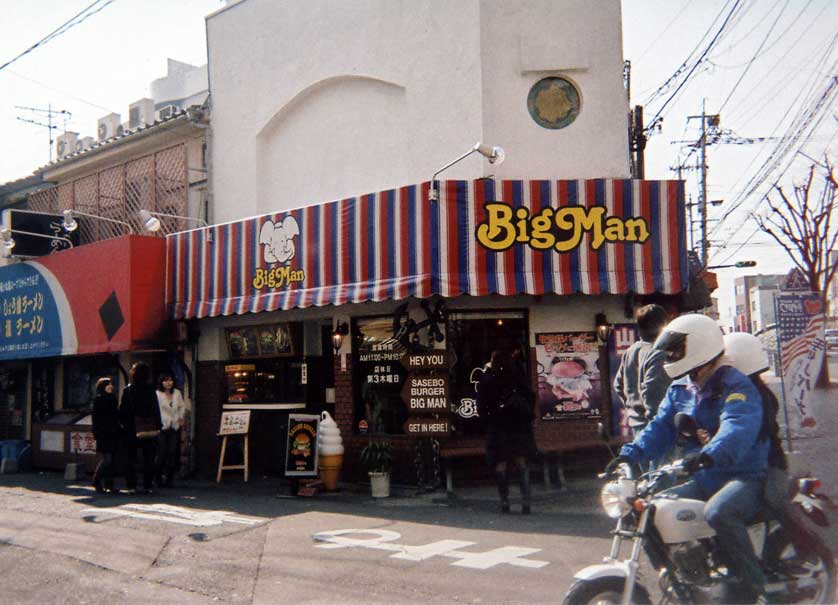