Kusari-doi or Japanese rain chains channel heavy rain down to the ground on traditional Japanese houses and temples.

The climate of Japan has driven elements of its architectural development, and the differences in these elements can be seen if one journeys through the country from south to north, from Okinawa to Hokkaido. Some areas have domestic architecture driven by high temperatures, high humidity and rain, others by strong winds, and yet more by the heavy, destructive, weight of winter snow, which can flatten buildings and trees and which has led to the refinement of Yuki-gakoi and Yuki-tsuri.

In regions of heavy snow, there are usually no horizontal gutter pipes along the eaves of buildings - they would be smashed or pushed off by freezing and thawing and by the weight of snow sliding down the roof. Likewise, it is rare to find tiled roofs in such regions for similar reasons, melt water would penetrate beneath the edges of tiles and subsequent freezing would shatter them or pop them off. Modern relatively maintenance-free metal roofs meet these challenges, as did the cedar bark, shingle, or thatched roofs of the past - although they required regular maintenance. 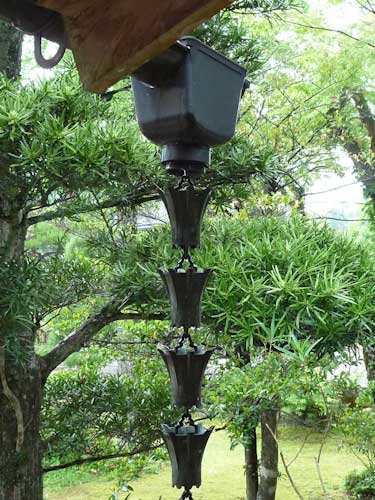 Metal or plastic cups make for attractive and functional shapes when connected as a rain chain.

In regions with heavy rain, different approaches are necessary. Here the need to channel water off the roof and away from the building is necessary and may also involve the gathering and conservation of water for later use. In warmer, and wetter, regions of Japan, rain may fall as a gentle misting of water droplets, it may fall heavily, and sometimes seemingly endlessly in large drops during the annual rainy season (tsuyu), or it may pound down with a fearsome force in apparent rods of wind forced water, especially when typhoon driven.

Rain is commonly allowed to fall in sheets from the eaves straight to the ground, and where it falls there may be gravel or earth soakaways to absorb it, or stone slabs, which, over time, develop eroded patterns caused by the rain. Downpours bring flooding and the sheer volume of water falling so quickly onto roofs commonly overwhelms gutters (where they are used) and would overwhelm downspouts too - if they existed. An alternative to downspouts is common in Japan. 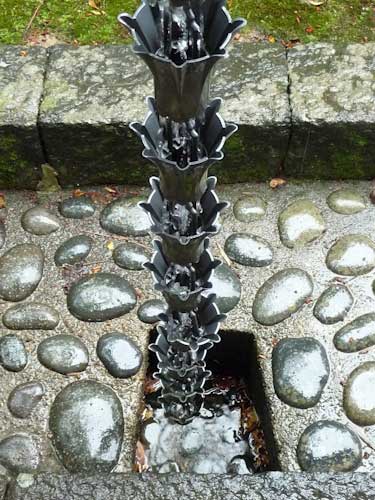 Typically aligned over a soak-away drain, rain chains are attractive elements of a Japanese house and garden. 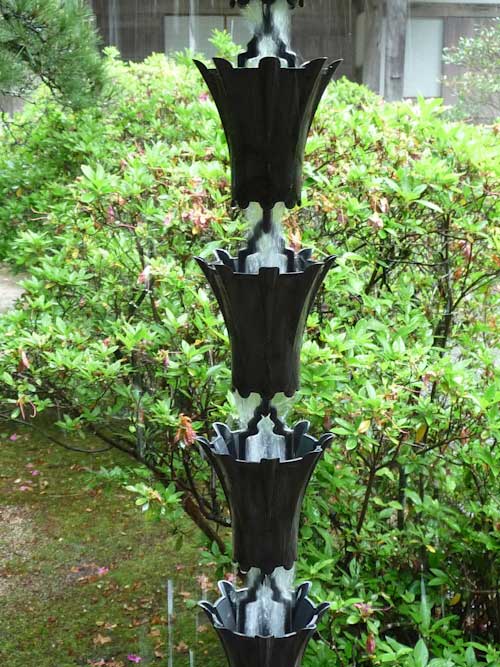 Kusari-doi function as well in a rainy season (tsuyu) torrent or a gentle spring rain, but are not suited to areas with heavy snow or freezing weather.

As an attractive and functional alternative to the closed downspouts so commonly seen for example in Europe, in Japan there are Kusari-doi. A common quest of overseas shoppers during journeys around Japan, Kusari-doi are not to be found in the likes of souvenir shops here, instead they are to be found only at specialist garden supply shops in Japan, though they are well-represented at on-line stores in the west and in Japan.

The beauty of the Kusari-doi is that it gathers water from the roof and conveys it to the ground whether in a trickle or a flood, and does so artistically, transforming a dull, enclosed downspout into a visually and auditory delight. The chain may consist of chain links or a series of linked cups. In gentle rain the Kusari-doi glitters and flashes with the falling water, and provides a soft trickling sound as accompaniment. In heavy rain, individual trickling droplets are replaced by a rushing of white water. Watching water descend the chain is a pleasant distraction, both relaxing and soothing.

Beneath the Kusari-doi it is common to place a prominent stone, a slab, a barrel or a stone basin of some sort to catch the water for later use. In gentle rain, erratically falling raindrops create attractive ripple pattern on the surface of such a basin, and provide yet more distraction. Look for Kusari-doi at the corners of traditional style houses, and at Japanese temples and shrines. They are most commonly found in the western and southern parts of the country and are rare in the north. 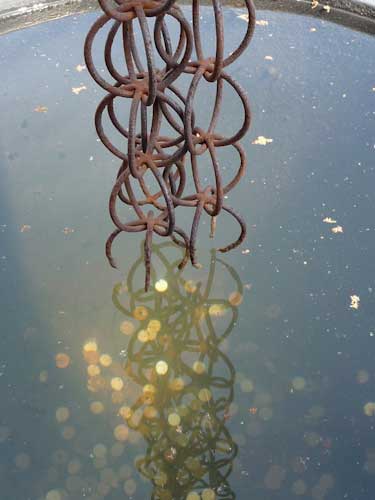 Here a Kusari-doi is made of simple, interlaced iron rings over a stone water trough used as a wishing well. Where the rings reach the water they have rusted away, indicating their age.