Lost in Translation a Humorous Look at Japan 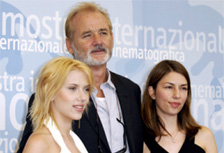 Hollywood actors hawking products on Japanese TV commercials are a phenomenon little-known to most Americans.

It isn't referenced in the media, and for good reason an actor appearing in a TV commercial is often seen as a sellout by Americans.

So what is wrong with trading your fame for a few greenbacks? Lost in Translation (written, directed by Sophia Coppola, daughter of director Francis Ford Coppola) takes the Hollywood product-hawker in Japan as its subject matter, tracing a trip to Tokyo by actor Bob Harris (Bill Murray) to star in a commercial for Suntory whiskey.

Harris, despite earning a two-million dollar paycheck for his appearance, finds himself lonely in his hotel. He meets a newlywed American woman (Scarlett Johansson) who, like him, is stranded in a strange land with no company and not much to do. Together, they discover that friendship can blossom between two people with very little in common, and learn something about what love means. 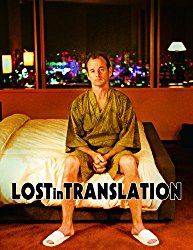 The first half-hour is a humorous ride for the audience, as Harris, exhausted from a trans-Pacific flight, is greeted at the hotel by a gaggle of suit-wearing Japanese businessmen and women from Suntory, a Japanese beverage giant.

As Harris receives his obligatory small gifts from the smiling Japanese, he sarcastically remarks that his greeters must be really tired. Harris (who seems used to the polite routine by now has he shot a commercial here before?) cues the audience that, despite the smiles of his hosts, he has no illusions that they see him as anything other than a prop in their commercial.

This is going to be business and then Harris will be on his way back to America. This sets the stage for the rest of the film, as the world-weary Harris, despite the fact that he is earning millions of dollars from his commercial, continues to poke fun at his hosts.

But Harris is not destined to spend the trip alone. He discovers an unlikely companion in misery in the beautiful Charlotte (Johansson), a graduate in philosophy from Harvard and a newlywed. Charlotte's husband, a photographer, is shooting for several days in Japan. Rather than taking her along on his regional assignments, he leaves her alone in the same hotel as Harris.

Spending most of his free time boozing in the hotel bar, Harris starts a conversation with an equally bored Charlotte. They discover that they are both alone on the equivalent of a desert island - the hotel in the middle of alien Tokyo.

They start a friendship, and venture outside of the hotel for a night on the town with some Japanese friends of Harris'. The relationship looks to be headed towards the bedroom and it does, though not as the viewer might expect. 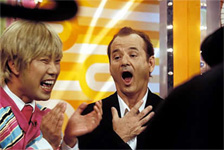 Any expat who has lived in Japan will recognize the heady blur of strangely-decorated pads, clubs, and karaoke boxes to which Harris and Charlotte find themselves escorted by their Japanese hosts.

Also familiar to those living in Japan is the evening variety show host Matthew (pronounced ma-shu), on whose show Harris appears later in the film. His show, complete with psychedelic graphics and physical humor reminiscent of Jim Carrey, is at this moment one of the most popular in Japan

Throughout the movie we are treated to subtle nuggets of humor by Murray, experienced comedian who has recently been playing more serious roles. It is perhaps exactly because of his past comedy experience that he is so effective in his recent films, Murray uses his unique ability to elicit laughs from his audience to the films' advantage he easily lightens the tension of serious films.

This brings us to an interesting point of discussion is Lost in Translation a movie which bashes Japan? There is no denying that it relies heavily on humor which makes Japanese culture the butt of jokes.

My reply to the critic would be: lighten up! The film's humor never slides towards malice; rather, it tamely pokes fun at a culture which is famous for being insular and difficult to understand. Any foreigner who has lived in Japan will no doubt have experienced many of the same situations Harris and Charlotte find themselves in throughout the movie.

For those who want to view some real-life Hollywood actors starring in Japanese television commercials, head for your nearest Internet connection.

At one site, www.japander.com, one can watch Harrison Ford pouring Kirin Beer, Brad Pitt trying on Edwin jeans, and California governor-elect Arnold Schwarzenegger drinking Arinamin V, which, according to the site is "a bizarre genki' drink designed to keep overworked salarymen' wide awake in those unpaid overtime hours."

In Japan, there doesn't seem to be a stigma attached to selling out. Watching a Hollywood star using a familiar product may make Japanese consumers feel connected with western culture. The practice is also beneficial to the actors, increasing the stars' visibility to the Japanese audience, and yielding a hefty paycheck for a few days of work.

Also, thanks to a contract which prohibits the airing of the commercials outside of Japan, there is virtually no chance that less forgiving Americans will see their work unless they have an Internet connection, that is.

Read a movie review of Lost In Translation: written and directed by Sophia Coppola, starring Bill Murray and set in Tokyo, Japan.