Japan Geology: read an overview of the geology of the Japanese archipelago including earthquakes and volcanoes.

Japan: tectonic turmoil and violent volcanism: (overview of the geology of the Japanese archipelago) 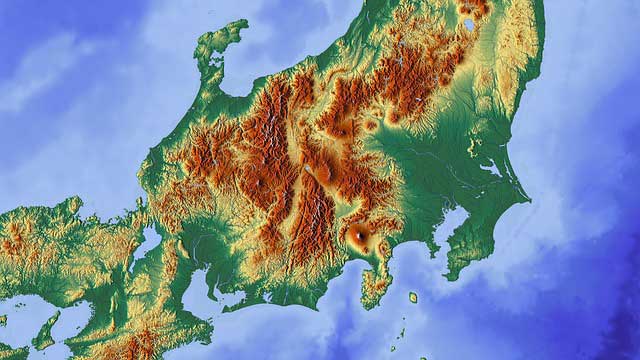 The Japanese Archipelago is generally perceived as an over-crowded small country on the rim of Asia.

Japan certainly has a large population (127 million) for its size, yet it is larger than either the British Isles or New Zealand. Japan presents a refined fade, but comes with turbulence in its soul.

To understand Japan and its origins, we need to ask: "Why is Japan where it is?" and "What kind of events does Japan experience?"

One of the iconic landscape features of Japan is its tallest mountain, an almost perfect volcanic cone, Mt Fuji (3,776 m). Mt. Fuji stands as stark testament to considerable
volcanic activity in Japan, as do the enormous number of steam vents, sulphuroles, mud pots and hot springs scattered around the country. The presence of volcanoes on small islands is often indicative of oceanic origin; so what does that tell us about Japan? 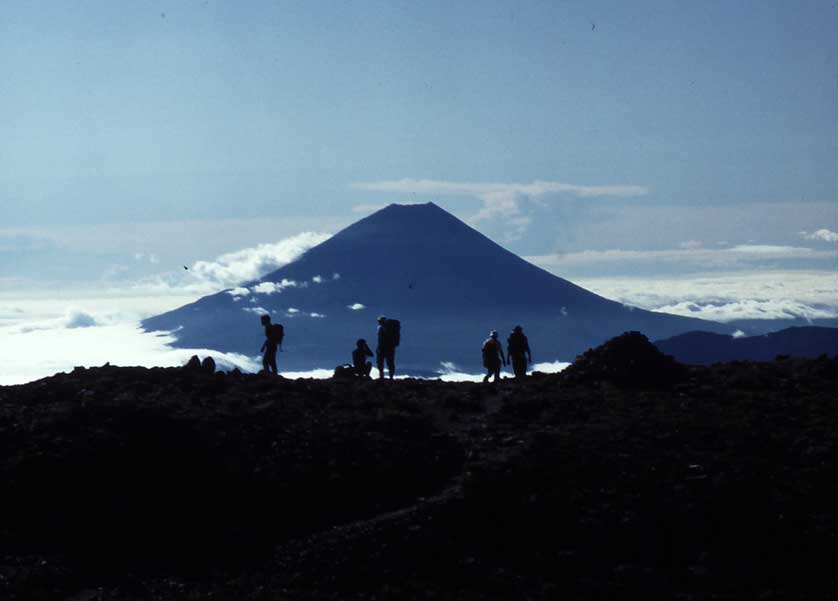 Mt Fuji is not only iconic of Japan, but also represents its tallest volcano.

About 90% of the world's earthquakes occur around the ring of fire, and with Japan situated over an extremely fragmented section of the Earth, where plates collide and where volcanoes erupt from the sea and on land, it is not surprising then that earthquakes and tremors occur frequently in Japan. Much of Japan is continental, but there are archipelagos of purely oceanic islands.

It is the geological features of Japan that have served to give it a dramatic and beautiful landscape, its description as a stratovolcanic archipelago gives a hint to what dominates the scenery. Hokkaido has a number of mountain ranges, most notably the Daisetsu, Yubari and Hidaka ranges in the centre and the Shiretoko range in the northeast.

Numerous isolated volcanoes in the region present dramatic cone-scapes and there are a number of significant calderas, that at Kussharo being the largest in Japan at 26 x 20 km, but that at Mashu, presents the most beautiful lakeside scenery in the country.

In northeastern Honshu, we find Japan's longest mountain range. In central Honshu we find a prominent volcanic front north and west of which are many volcanoes, including Mt Fuji, while to the south we find the active volcanoes forming the Oceanic Islands of the Izu Island chain.

In western Honshu lies Lake Biwa, one of the longest extant lakes on Earth, ranking with Lake Baikal and Titicaca in significance, and a satellite's eye view immediately reveals the most visibly dramatic fault line in Japan, running through northern Shikoku and across the Kii Peninsula. This is even more dramatic when seen on a colour-coded geological map.

A significant volcanic front marks the distribution of Kyushu's volcanoes, with the most dramatic being enormous Mt Aso in the centre, Kirishima in the south and Sakura-jima, once an island, but now connected to the mainland in the south, opposite the city of Kagoshima. 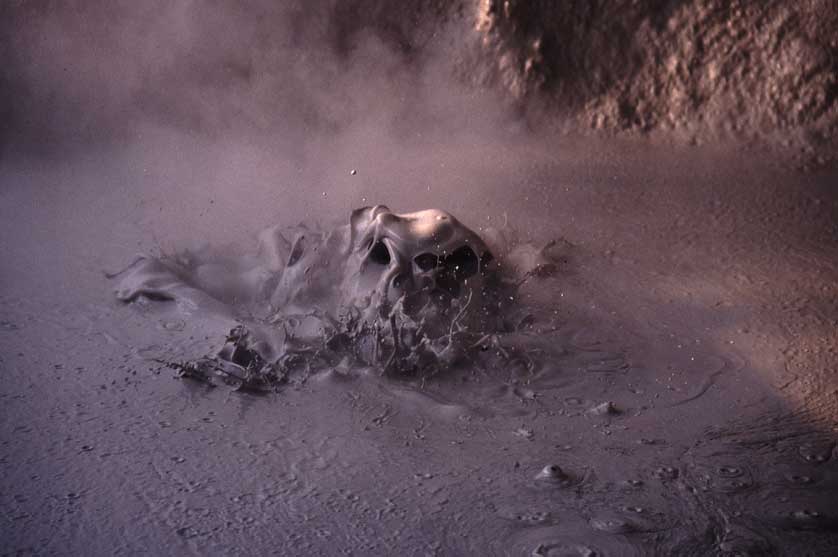 Volcanic activity in Japan includes boiling springs and bubbling mud pots. Here in Beppu, Kyushu, gouts of mud erupt from one of many mud pools.

Frequency Of Volcanic Eruptions In Japan

Volcanoes are part of the Japanese landscape, there are after all more than 100 of them, with an average of five eruptions a year. The first documented eruption was of Mt Aso in Kyushu in 710 AD, but the strongest of all was that of Mt Towada in 915 AD. Few regions of Japan are far from an active volcano. The most visually dramatic of all, is of course, Mt Fuji.

Some volcanoes remain continuously active for prolonged periods; Sakura-jima has been active since 1955 for example, while others erupt periodically, Mt Asama last erupted in February 2009. Mt Unzen, near Nagasaki, in Kyushu collapsed dramatically in 1792 generating an avalanche of debris that triggered a tsunami causing 15,000 casualties.

Volcanoes can spout lava, ash, steam kilometres up into the atmosphere, and send debris avalanches and mud slides to threaten inhabited areas. The Japanese devised their own scale, the Shindo, to express the impact of the tremors and quakes associated with volcanic activity.

Unlike the Richter scale, which measures magnitude at the epicentre, the Shindo describes what the tremor feels like at any given location, so is much easier to understand than the impersonal science of the Richter scale.

The natural outpouring of hot water from springs across the country does not go un-used. Research in to geothermal energy use is being conducted, naturally hot water is used in some public facilities, and onsen are famous throughout Japan as places for relaxation and recreation.

Recent major earthquakes have included the Chu-etsu on 23 October 2004. This magnitude 7.3 temblor, lasted only 20 seconds, but caused (then) record-breaking damages of cUS$200 billion.

Past quakes and their costs now pale into insignificance when compared with the 11 March 2011 megaquake of 9.0, which laid devastation across a huge swathe of the coastal northeastern region of Honshu, and which was followed by the highest tsunami in recorded history. The associated disasters at the Fukushima nuclear power stations have added considerably to the costs, and these will ultimately be measured in many trillions of yen. 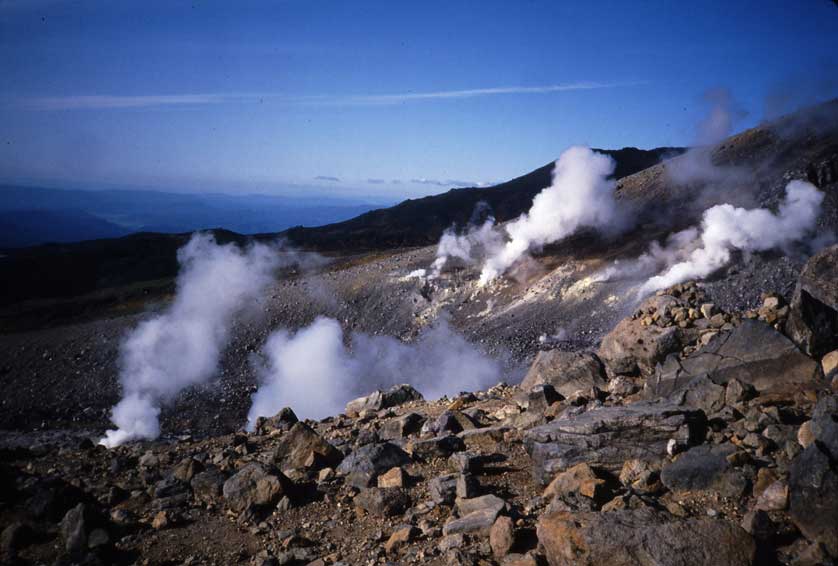 Steam vents and sulphur springs are a potent reminder that the Earth's forces are powerful, and close beneath the surface. Here seen in the Daisetsu Mountains of central Hokkaido.

Triggered by undersea earthquakes, tsunami are immensely destructive
of life and property. Those unfamiliar with them are drawn down to the shore as the seas retreats, only to be caught unaware as the immense
wave rolls in. Japan has experienced more than its share of tsunami.

Despite the enormity of the calamity that struck Okushiri Island off
Hokkaido in 2003, the capacity of the Japanese people to endure natural disasters and to recover from them has to be seen to be believed.

A visit to Okushiri in spring 2008, revealed no visual evidence of the amazing destruction that the town had suffered just five years earlier! That calamity is now a mere footnote in history given the scale of the 2011 tsunami, which impacted coasts from Hokkaido in the north to Okinawa in the south.

Japan experiences every kind of natural disaster known to man: earthquakes, volcanic eruptions, and tsunami. Some of the largest tsunami and earthquakes ever recorded on Earth have been in Japan, and not surprisingly Japan takes natural dangers very seriously (hence you will find warning signs around the country), and the Japanese people face these impending natural disasters with an enviable stoicism.

However, Japan doesn't just suffer or endure its geological circumstances, it also takes advantage of them by developing geothermal energy, and almost everywhere one travels throughout the country, one can find hot spring resorts to relax in - such warm waters fuel an enormous tourist industry.

Japan's multi-faced geological history has created its impressive landscapes, but to appreciate them you must leave the cities behind you. 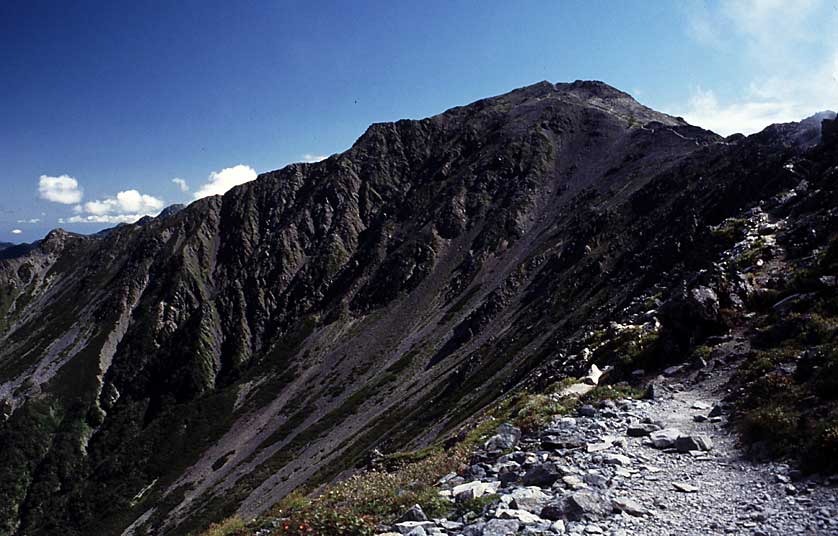