Kagura: Kagura, the music of the gods, is a form of traditional Japanese dance theater that recounts the myths of ancient Japan.

The ideal kagura experience for a visitor to Japan might be a night like this. Imagine taking an autumn evening stroll somewhere deep in the countryside of Kyushu or Shimane, in one of those ancient places in which the mythical sagas of the gods creating Japan played out. Faintly, you hear repetitive drumming with a distinct flute sound on top of it. 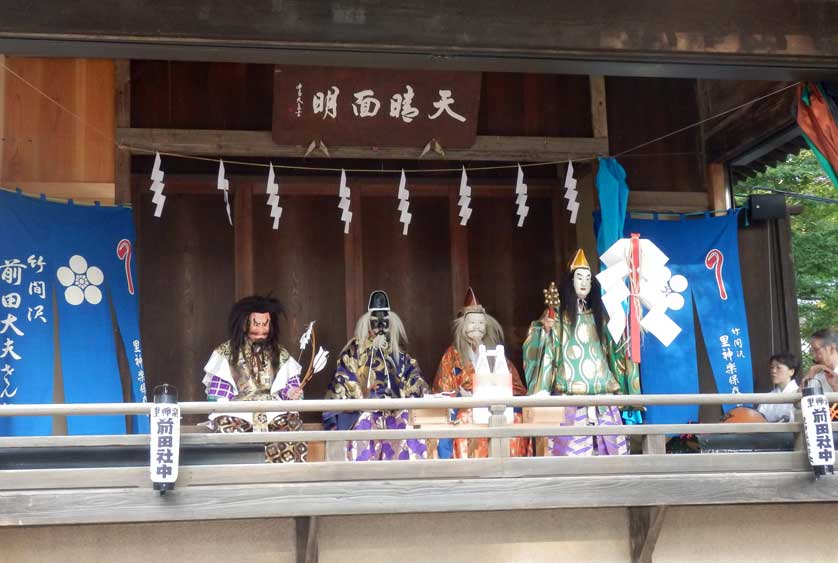 Curious, you head toward the giant trees blocking your view to the stars from within which the sounds seem to emanate. Sure enough, the trees belong to a Shinto shrine. You enter the unlit first gate and carefully navigate the ancient stone stairs towards the lights at the top.

You arrive at the courtyard in front of the main shrine. People sit on flimsy benches and all their attention is directed at the small stage a little off from the main shrine hall. On the side of the stage you find the source for the sound that attracted you here - a small group of musicians drumming away and the notes of the whistling flute.

In the center of the stage, people in ancient-looking costumes with masks on their faces seem to tell a sort of story with their dance moves. But is it a dance at all? Swords are drawn, silent disputes take place, symbolic flasks of sake are emptied. 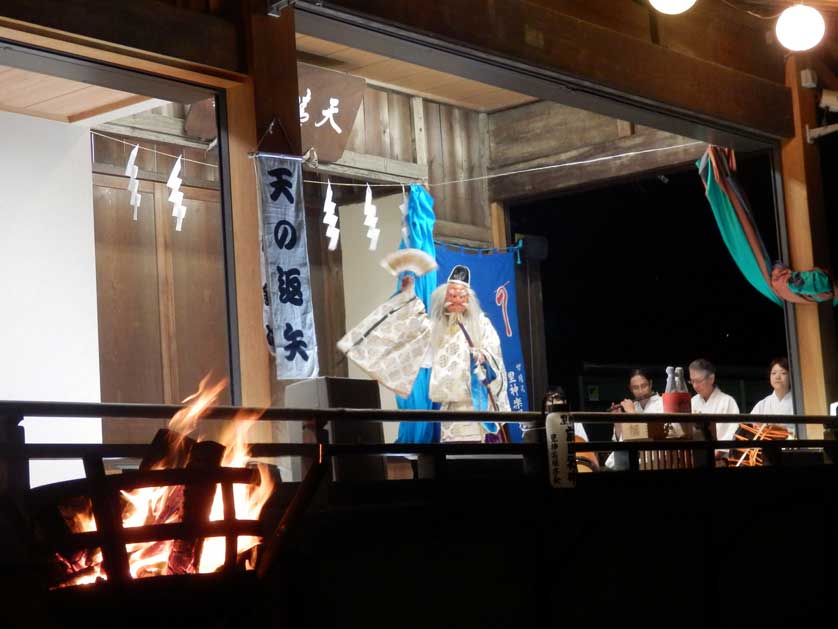 It is a dance but it tells a story. You quietly sit down, open that little sake bottle you fortunately had in your knapsack and you are soon mesmerized by both the strange events playing out on stage to those repetitive rhythms and by the situation you find yourself in.

It may feel like you inadvertently stepped right into ancient Japan - though the camera flashes and the digital recording devices planted close to the stage remind you that you haven't left the 21st century. The scenery is partly lit by open wood fires, their flickering creating a mysterious shadow play in the autumn leaves of the huge trees surrounding the stage.

While the music plays on, the scenes on stage change. Long-haired characters in fantastic costumes who seemed to be the main leads of the story depart, new long-haired mask-wearing characters enter. Those stories of the ancient gods are meandering, what seemed to be one story just turned into another - go slow on the sake or tomorrow you will think that it was all a dream. 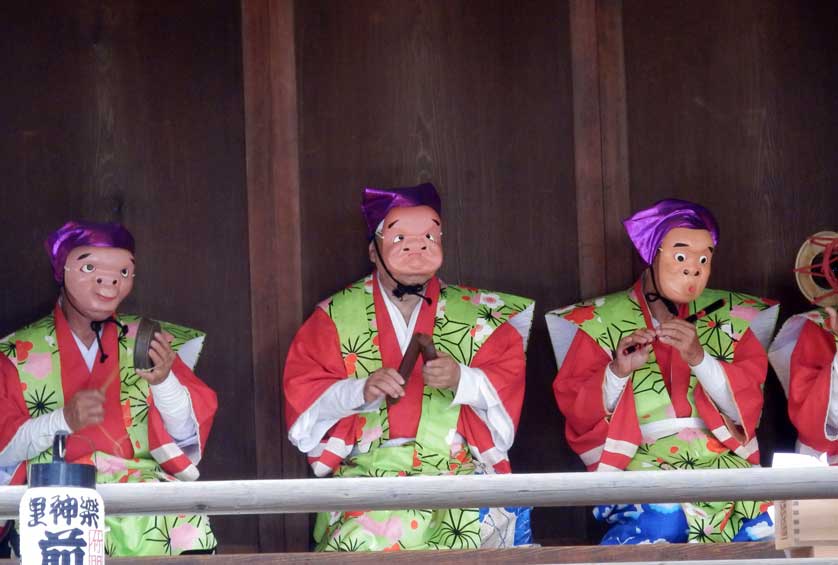 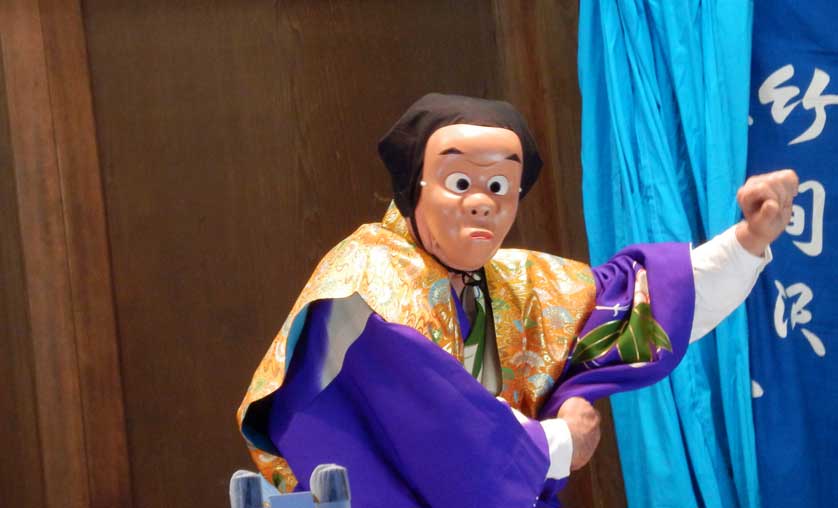 Kagura translates as "entertaining the gods". The Kojiki, Japan's oldest book (published in 712 A.D.), an official imperial court-mandated collection of the ancient sagas of the gods, records the mythical first kagura in history this way (shortened and paraphrased):

Amaterasu, the Goddess of the Sun, got scared by the violent antics of her brother Susa-no-Oo and retreated into a cave. She blocked the entrance with a huge rock. Thus the world turned into constant darkness, causing great pain to the other gods and to the humans living on Earth.

The gods decided to lure Amaterasu back out of the cave. They made a mirror and arranged a large gathering right outside the entrance to Amaterasu’s cave. Goddess Ame-no-Uzume started to dance. An intentional wardrobe malfunction exposed her breasts, causing great laughter among the gods.

Amaterasu worried and pushed the rock aside a bit. "Why are you all laughing that much?" she asked, "I thought you are all living in great pain."
"We found a greater goddess than you , come out to look." The gods answered.

Curious, Amaterasu stepped out of her cave. The gods held the mirror to her face. Seeing her beautiful self in the mirror, Amaterasu took up her original position as sun goddess again and daily sunlight has returned to Earth ever since. 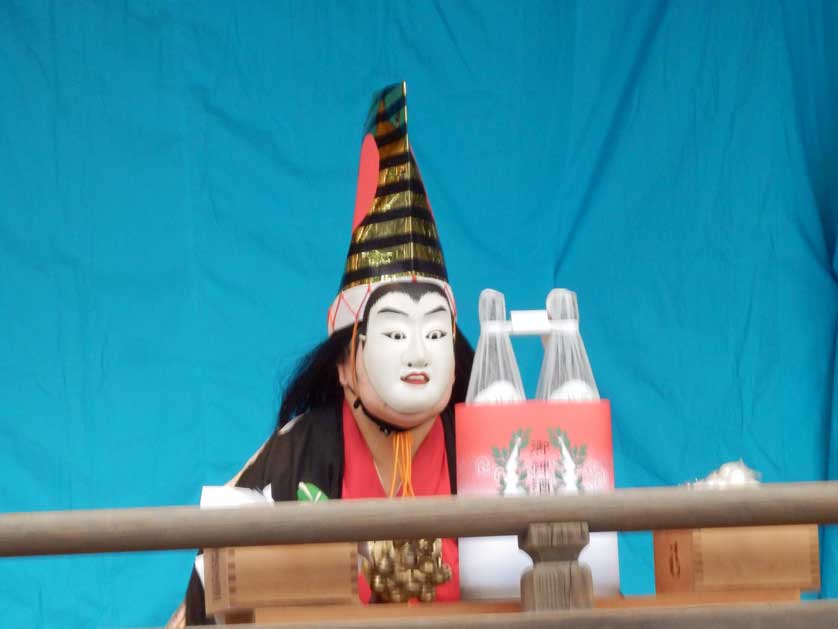 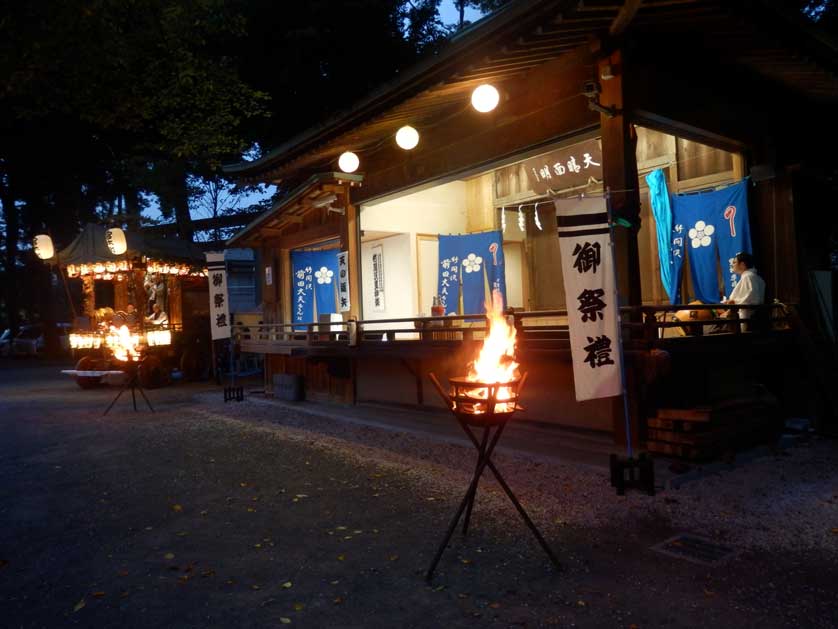 The beginning of the real (human) history of kagura is murky. Tales of the gods like the one of Amaterasu being lured out of the cave were certainly popular before the publication of the Kojiki. Celebrations of the gods certainly took place in early Japan.

It seems however that the start of the more formalized form of the kagura stage dance began at the imperial court in the years after the Kojiki had been published. Perhaps as an educational tool to keep the old Shinto traditions alive in a time when Chinese Buddhism spread widely in Japan.

From the imperial court, however, kagura soon spread to the local farm populations. They bent the formal imperial stage plays their way and turned them into raunchy after-harvest village celebrations.

A large variety of kagura forms developed. At the imperial court, they had been performed by Miko-san, Shinto shrine maidens. No doubt, the farmers followed that tradition by recruiting village girls. In later, more puritan times, most likely during the Edo era (1603-1868), deliberate wardrobe malfunctions on stage became outlawed.

As in the case of kabuki, kagura performers changed into all-male groups. All female characters came to be played by masked male performers.

After the opening of Japan to the West, Japan's cultural traditions became an important issue for the Meiji government. Regional cultural traditions were to be streamlined to fit the general national cultural narrative. In the late 19th century, nationalist cultural activists sought out local rural kagura and rewrote them to correctly depict the original legends as spelled out in the newly published Kojiki. Kagura dances were considered educational tools in the service of the Shinto nation at the time. Many distinctly local approaches to kagura were lost during that period.

Kagura stories in their wide variety started to bloom again after the end of the American occupation in the early 1950's. 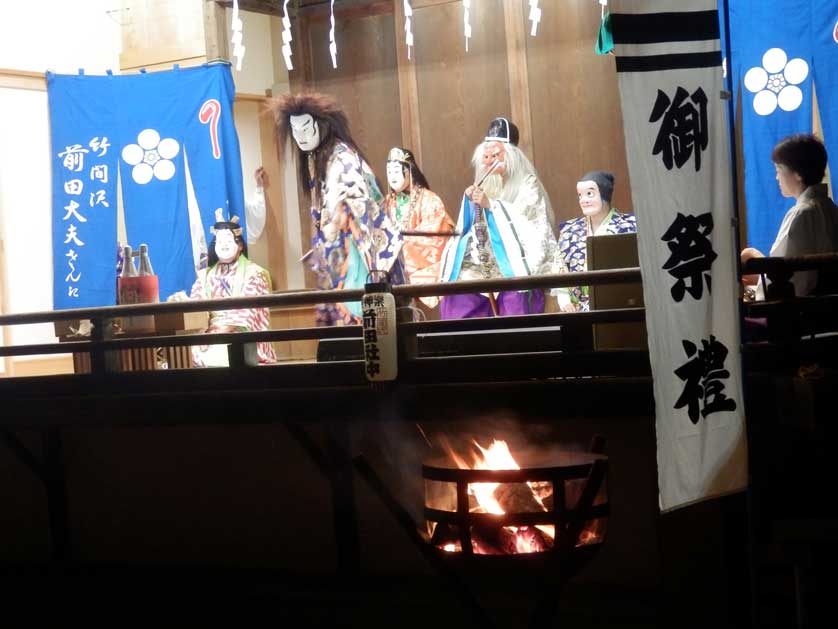 At some shrines, kagura performances are preceded by Miko shrine maiden dances. Those are purely dances however.

The actual kagura dances tell more or less easily recognizable stories involving the ancient gods. Susa-no-Oo's defeat of the dragon is one the most famous legends regularly brought to the stage. It's also one of the most challenging and only the best of the kagura groups have a go at it.

In some cases, off-stage announcers help the understanding of the stories by spelling out the most important plot points.

Kagura take place at Shinto shrines all over Japan. The most elaborate performances are however given in Kyushu and in Shimane Prefecture, the areas most closely connected to the myths of the ancient gods. According to the legends, those were the areas where the gods formed the country that would later become known as Japan.

In Kyushu, Takachiho in Miyazaki Prefecture and Shonai in Oita Prefecture are particularly famous for their elaborate kagura. Shonai is the home of the Kumotori kagura group, legendary for their wild but highly sophisticated kagura performances.

In Shimane, Iwami Kagura is the distinctive local form of kagura. Iwami is the name of the former province that made up present-day eastern Shimane, and Iwami Kagura is marked by its appeal to the senses, with more light, color, sound and movement than most other regions' kagura, designed to really entertain.

In Takachiho, Shonai and Shimane, kagura dances are also held at local farmhouses or makeshift stages in neighborhood squares.

Takachiho especially has a strong relation to kagura: the cave in which Amaterasu supposedly hid and from which Ame-no-Uzume lured her out with the first kagura ever performed is at Ame-no-Iwato shrine about 8km outside of Takachiho.

Autumn and late spring are the main seasons for kagura. However, occasionally kagura takes place during the rest of the year as well. 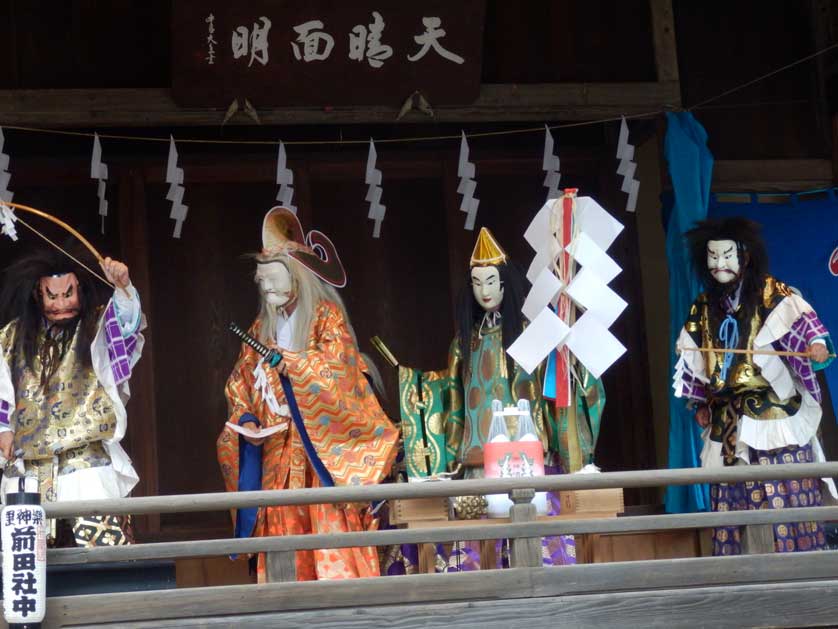 Kagura not on the common tourist trail

Though exceptions exist. Takachiho for example markets itself as a center of kagura to visitors and puts on short daily demonstrations.

Individual visitors are highly welcome to any kagura performance but it seems that commercial tour bus companies are discouraged from delivering their noisy crowds.

How to find good kagura

In order to find out about a kagura performance taking place in the area you live in / you want to visit, you should check the event calendar sections of the websites of the local shrines.

In some cases, the regional umbrella organization of local kagura groups publishes an event calendar. See here the calendar of the Shonai kagura organization in Oita Prefecture, Kyushu (in Japanese).

The most famous Takachiho kagura takes place at Awa-no-Iwato Shrine about 8km outside of Takachiho City. Here is the legendary cave located in which Amaterasu supposedly hid - and thus the location of the very first kagura.

The annual kagura at Awa-no-Iwato is in late September.
takachiho-kanko.info/event has detailed information.

Some kagura groups operate their own websites and Facebook pages.
See the Facebook page of the Kumotori group in Shonai, Oita, Kyushu (in Japanese)

There is an annual kagura festival at Shinmeisha Shrine in Tokorozawa, Saitama.

Offline, the best way to find information about kagura is the most obvious: talk to the people at the shrines. They will be able to tell you about kagura in your area. 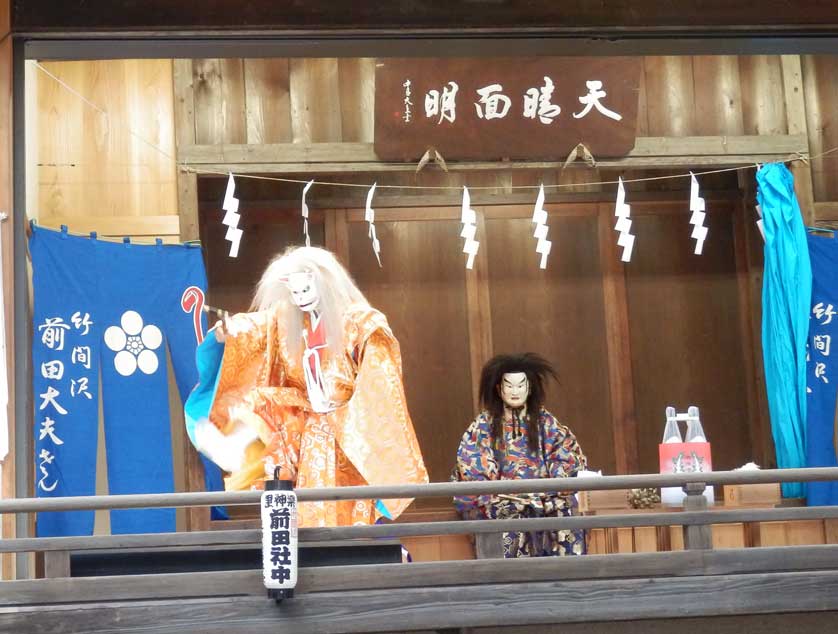