Read a guide to the use of stepping stones and their contemplative nature in Japanese gardens and temples.

A Japanese garden is a world apart from its western counterpart. In the west, formal symmetry is the norm with geometric flowerbeds and lawns; there may be wild corners in an attempt to encourage nature into the garden, but the whole feel, while perhaps colourful or pretty, is contrived and unnatural. 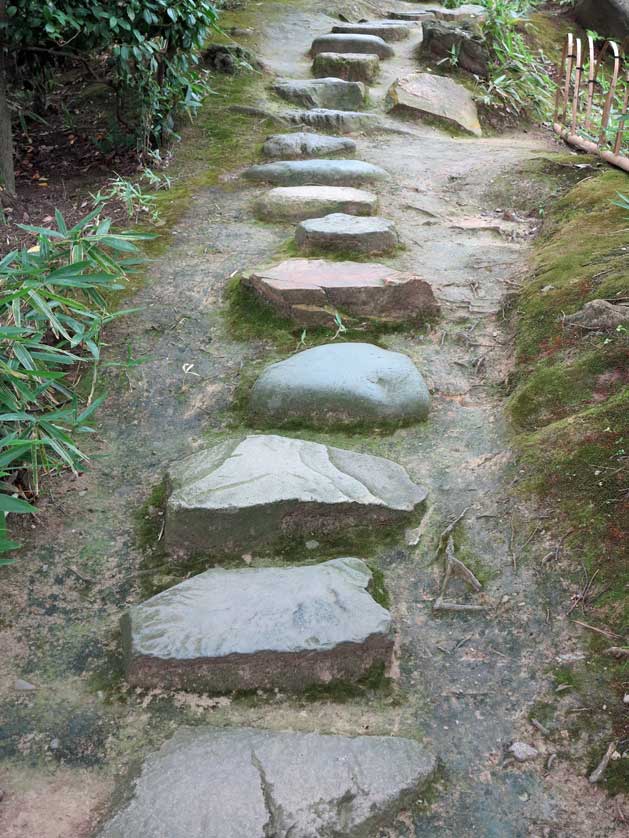 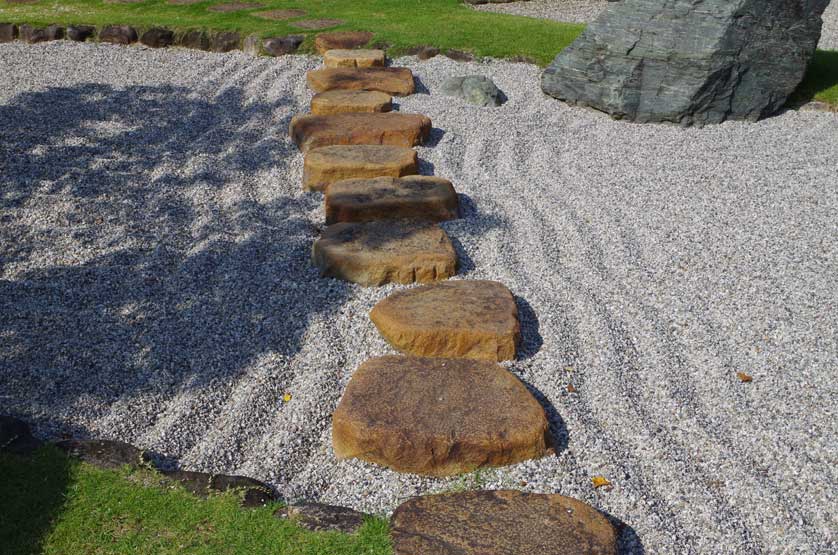 The symmetry and geometry, while clever on first sight once known become uninspiring. In contrast, Japanese gardens, ranging from tiny tea gardens to roof top gardens, and large strolling gardens, rely more on complete contrivance to create a powerful impression of 'nature-so-perfect' that even Nature cannot compete with it.

Entering a Japanese garden is to step outside time into a contemplative world; irregularity tempts the eye, and scenes unfold in different directions, the viewer is drawn on through the garden, discovering new elements that change with the seasons.

The garden, as a separate world in which to retreat for peace and contemplation, provides meditative moments. Contrasting elements such as trees, rocks, stones, or water features provide the surprises that time itself softens. Growths of moss (so commonly raked out of western gardens), gatherings of ferns, the pattern of tree roots on the soil surface, the wear on stones, all of these become important features in the context of the Japanese garden.

Representation is commonplace too. Water may be present either in its original form as a stream, pond or lake, or represented by a pattern in raked gravel, or in laid stones. Mountains may be there, having been constructed in miniature in the topography of the garden or they may be represented by clusters of artfully placed rocks.

The elements within the garden draw us deeper into the garden, such that we experience an inwards pull. Yet the construction of the overall garden, combined with the placing of its plantings, is commonly designed so that aspects beyond the garden appear continuous with it, creating an enormously enlarged sense of space.

A distant castle, a forested hillside, a nearby grove of trees, each may be seen through the trees of the garden as if part of a continuing view, and as if the observer could continue walking out into that larger landscape, so that there is a counterbalancing outwards pull. The visual delights, both within and beyond, distract us from the reality, which is that a hidden road, river or urban landscape my actually intervene between the elements of the apparent broader view. 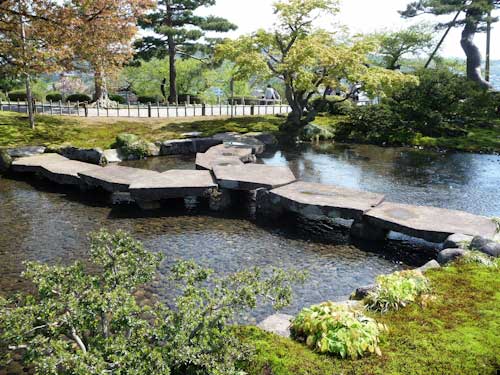 Stonework may be present in the garden in various forms too. A stone lantern is a typical feature, so too is paving. Stones feature prominently in pathways. These are typically uneven. Such stone paths force us to walk slowly, with care, to contemplate our path and to admire the ground, and the texture and colour of the stones.

In the litigious west, public paths become ever more flat without steps otherwise the hurrying, scurrying masses are likely to sue for any injury caused by tripping, but in a Japanese garden the whole aim is to leave behind the rushed world outside, and to enter a different world.

Walking an uneven stone path, particularly of stepping stones, makes for precarious footing. That precariousness forces us to slow down, to pause, to look carefully. While stationary, we look around to admire the view, but to proceed we must above all focus on the path itself. In doing so, we lose sight of ourselves; we become more engaged in our surroundings than in ourselves. 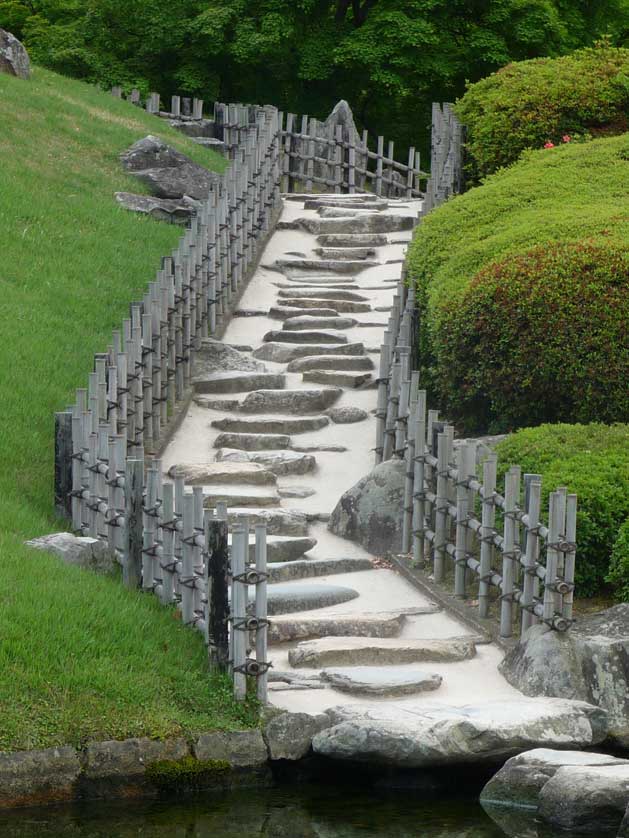 In Koraku-en, Okayama, what at first appears as an erratic jumble of uneven rocks, on closer inspection is a pathway of stepping stones along a dry clay path that resembles a stream. The 'stream' is beautifully bordered with rustic bamboo fencing. 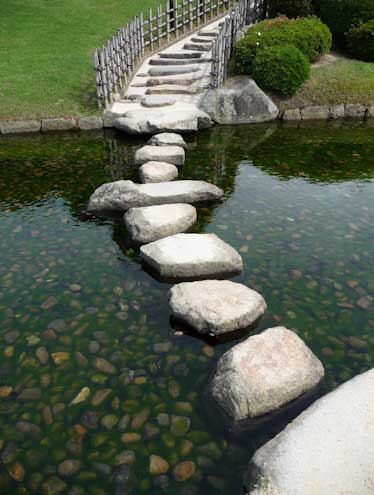 A series of stepping stones on a dry 'stream' continues out across the water forcing the stroller to look carefully at the stones underfoot.

The pathways within a Japanese garden are rarely straight. They wind, they turn, they present new views at every turn, and they present unevenness to the feet. It is not uncommon to find recycled stonework in paths, so the path becomes not only a physical path, but a mental path too, as we trace the pattern in the stones and imagine its past uses. Stepping stones may be set in gravel or earth, or in water, and the use of old millstones seems commonplace.

Standing on an ancient mill stone, preparing carefully to take the next step, a golden carp swimming sluggishly beneath calm cold water, a swallowtail butterfly flitting past on a warm summer breeze, or a glimpse of blossoming iris or azalea, or falling red maple leaves, each in their season - these are all aspects of a Japanese garden. 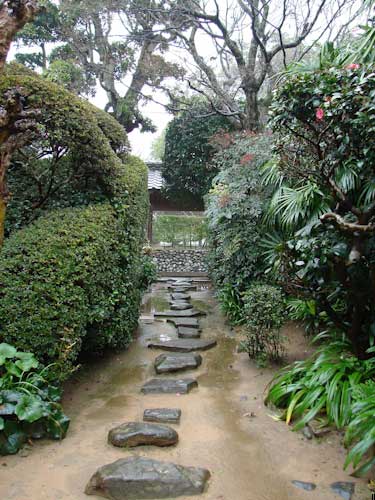 In a garden in Bukeyashiki, Izumi City, Kagoshima, stepping stones glisten in rain and show their value at raising the walker above the earthen garden path.