Mojiko Station 門司港駅:, Kitakyushu, on the Kagoshima Main Line, is one of few remaining large scale stations made of wood in Japan.

Mojiko Station in Mojiko, Kitakyushu, is one of the few remaining large scale stations made of wood in Japan. The station is located on the JR Kagoshima Main Line from Kagoshima to Mojiko. 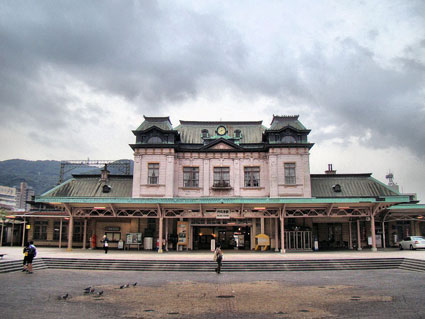 The station in Mojiko was constructed in a Neo Renaissance style in 1914 and the station's design is said to be based on the old Termini Station in Rome, though this is disputed. The current building is the second station building. The original was located very nearby, and built in 1891. In 1901, a ferry service between here and Shimoseki in the adjoining island of Honshu began. So, before the Second World War, Mojiko was the gateway station to the island of Kyushu from Honshu. Just across the strait was Shimonoseki Station. Because the Kanmon Ferry that plied the strait connected the two stations. However, in 1942, the 3.6 km-long Kanmon Tunnel opened. As a result, this station lost its importance. However, a sense of that old "gateway to Kyushu" status remains in its elegant design. Furthermore, there is a fountain in front just to remind you of the station's good old days. Also, the station's name changed with the opening of the tunnel. From its beginning in 1891 to 1942 it was called Moji Station. That name of over half a century changed to Mojiko Station, the added "ko" meaning "port" in Japanese. Inside the building is the local Tourist Information Office, which opens from 10 am-6 pm. In 1993, Mojiko in Japan and Flinders Street Station in Australia became sister stations. Then, in 2012, restoration work began on the station. According to JR Kyushu, the schedule is for completion in late 2019. So, one of Kyushu's - indeed Japan's - most beautiful old stations will be restored to its full former glory.