The year was Wado 4, 712 A.D. in the Western calendar, when scholar, nobleman and court bureaucrat O No Yasumaro presented the Kojiki to Empress Genmei at her court in the newly constructed capital city of Nara. 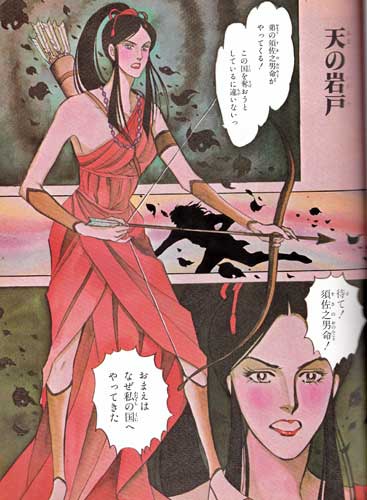 A story from the Kojiki as manga. Sun goddess Amaterasu refuses entry to heaven to her violent brother Susa-No-O

The book, written on the request of Empress Genmei, started out with the ancient myth of the god couple Izunagi and Izunami creating the first bunch of Japanese islands. It goes on to detail how they gave birth to a myriad of other gods of which Amaterasu, the Goddess of the Sun, was the most prominent. Those myriads of gods had myriads of children and some of them had notable adventures or did noteworthy deeds sketched out in the book.

One of those gods turned eventually human, sort of, and became Japan's first Emperor Jinmu. The book then follows the complicated genealogical line of the emperors and ends with Empress Suiko (554 A.D. - 628 A.D, reigned 593 - 628), the first Empress of Japan. 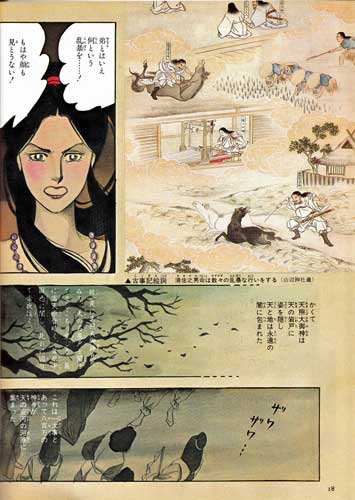 But Susa-No-O talks his way into Amaterasu's kingdom and soon starts plenty of troubles. Amaterasu retreats into a cave and the world turns dark

The Kojiki thus legitimized the lineage of the Imperial family and traced it back as descending right from the gods that had created Japan. On the other hand, it provided an exclusively Japanese historical narrative for the court, and in extension, for the country at a time when Buddhism and Chinese culture were spreading throughout Japan at full force.

The Kojiki was largely written in Chinese as that was the only writing system available at the time. Though some parts, especially the many old songs included in the book, were meant to be read in Old Japanese, with the Chinese characters only providing a way to record the sounds of the language. O No Yasumaru already addressed the problems of how to read the Chinese characters the book was composed of in his own introduction.

Deciphering the book in its original version at the time it was presented to the empress must already have been a challenge, even for highly skilled court scholars. 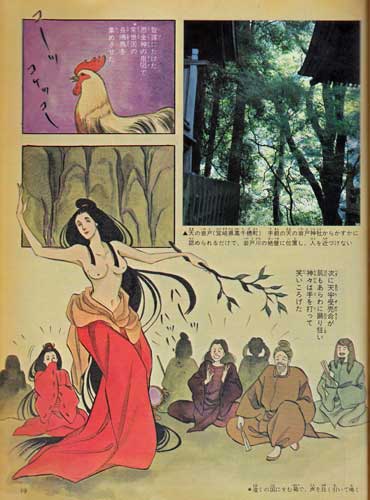 To bring Amaterasu and thus the sun back to the world, the gods arrange a wild dance in front of her cave 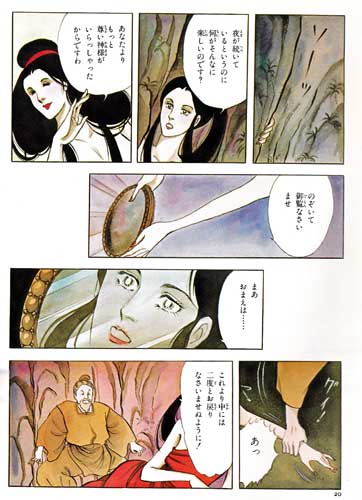 Amaterasu wonders about the loud laughter outside her cave and asks what is happening. The other gods tell her that they found someone much more beautiful than Amaterasu. They then hold a mirror to her face

O No Yasumaro based his research on the "Ancient Matters" (Koji) on a historical / genealogical account Emperor Tenmu (631- 686, reigned 673-686) had ordered but which had never been finalized.

O No Yasumaro also drew on folk legends, clan genealogies and especially on songs which in long ballads told of the beginning of the world, the gods, the legends, the wars and the ancestral emperors.

The result of his research is a rather uneven book. At times, it tells deeply touching and at times adventurous old legends in a rather entertaining way - but most of the time the book is spent on the names of the offspring of the offspring of a myriad of gods. That polygamy was the rule and thus every god and later every emperor had a multitude of quickly married wives, only complicates the picture.

How to read all these many names is another big question. Though all are spelled in Chinese characters, some are meant to be read with the meaning of the actual characters in mind, others with only the sounds of the characters, their meaning being understood via their Japanese pronunciation. O No Yasumaro himself helped here with annotations.

The Kojiki was soon overshadowed by the Nihon Shoki which was presented to the court in 720 A.D. and had been researched by a committee of princes and scholars. O No Yasumaro may have also worked on compiling that historical account. The Nihon Shoki covered much of the same ground as the Kojiki but was a more sober historical account and concentrated more on historical facts rather than legends (though it also includes many myths of the gods). 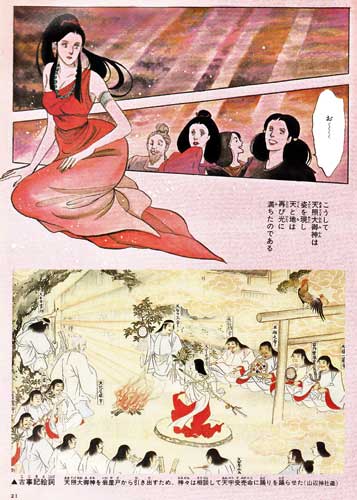 Once Amaterasu gets close to the mirror, the other gods pull her out of the cave. The sun has thus returned and will keep brightly shining

The Kojiki was rediscovered, re-evaluated and widely popularized by Tokugawa period scholar Motoori Norinaga (1730-1801) who wrote an extensive study on the book, published in 44 volumes and researched over a period of 35 years.

The Westernization of Japan in the Meiji era led many Japanese to look into the pages of the Kojiki in search for a historical narrative of their own, to assure them of their roots in a time of radical change.

The Kojiki has sometimes been interpreted as a sort of Holy Book of Shinto (which it never aspired to be), at other times as the book that was instrumental in instituting State Shinto as an ideology of Japanese superiority, guiding the Japanese war effort during World War II. The Kojiki has certainly been abused in those contexts, no doubt about it.

In the years since WWII, the folk legends laid down in the book have been popularized as ancient tales retold in movies, mangas and simplified school book texts while the original Kojiki in its full length is still a tough book to read - even for Japanese people. 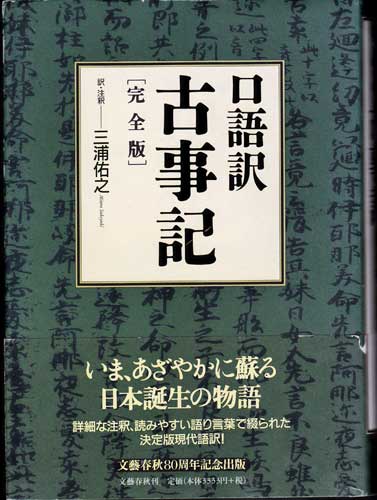 However, Sukeyuki Miura's translation of the Kojiki into modern Japanese as published by Bungei Shunju in 2002, turned out to be best seller: the book presents the original text with the names of the gods spelled out largely in katakana - and thus more or less in their original rendition. Extensive footnotes provide detailed background information, at times even including pictures to make clear which, say, bird was actually meant in the original text.

Miura's version of the Kojiki also includes extensive tables at the back of the book clearly delineating all the complicated family relations related in the text.

Miura also includes maps indicating the travels and conquests written about in the book.

One could only wish that any of the English translations would come even close to Miura's modern edition. 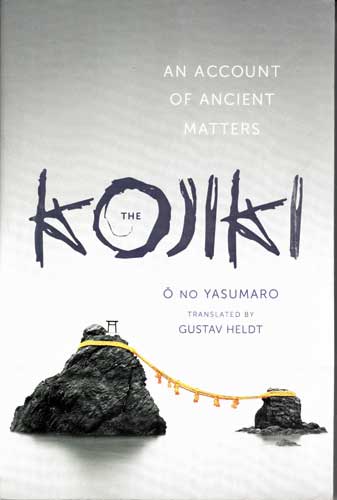 Cover of the Gustav Heldt translation of the Kojiki

The Kojiki was first translated into English by British scholar Basil Hall Chamberlain, first published in 1882. Being an absolute pioneer with his work, and Japan's old legends so far largely unknown in the West, Chamberlain felt it rightfully necessary to provide extensive background information on the text in his lengthy introduction and to explain every detail known to him in the footnotes on the pages.

Chamberlain did not only explain what he knew, he also translated almost every name of the gods and emperors given in the text into English - right in the text, not in the footnotes. Which makes for a very strange read, of course. The names of the most famous deities were left intact, however (with translation provided), and so are most of the place names.

Being a man of Victorian times, Chamberlain couldn't possibly wrap his head around the fact that Japan was a sexually rather permissive society and that even the oldest gods spoke in open terms about sexual matters. Chamberlain thus translated the racy paragraphs of the Kojiki into Latin rather than English. The erudite dons at Oxford and Cambridge would grasp the Latin with a smirk, the rest of the readers would be left out of the loop.

American scholar Donald L. Philippi's translation of the Kojiki was first published in 1968. Philippi not only corrected various errors in Chamberlain's translation and rendered the sections previously only available in Latin in English, he also tried to convey the most accurate old Japanese phonology of all the many names mentioned in the book.

Since the latter effort meant to revive vowels not used in current Japanese anymore, many of the names include academic pronunciation signs. Many names of the gods thus look rather strange to readers used to the currently common Western spelling of Japanese names.

That aside, Philippi's book is a pleasure to read. His fluent writing combined with the mystery of the old Japanese names works really well. You can get a small glimpse at his translation of the story of warrior Yamato Takeru here: http://www.ninpo.org/historicalrecords/kojiki.htm

Unfortunately, Philippi's book hasn't been reprinted since 1977. It is still available in the form of second-hand copies at Amazon and other online dealers but the price has by now become horrendous. From $100 upwards for a used copy.

Gustav Heldt, an associate professor for Japanese literature at the University of Virginia, was in the lucky position to be able to review all the various former editions of the Kojiki in both Japanese and English, including Sukeyuki Miura's which he mentions in his introduction.

Unfortunately, Heldt decided to go down the Chamberlain path by translating all names given in the book into modern English.

Heldt reasons in his introduction that "Names and narratives were intimately intertwined in a world where speech and song often acted as spells..." and that he thus wants the reader to understand the meaning of those names.

Well, yes, would you rather want to read pages filled with names like Iku-tama-saki-tama-hime or, in Held's translation, Lady Lively Soul Luck Gem?

While the first might be cumbersome to decipher and might appear as rather meaningless to English-language readers, the second certainly sounds bland, uninspired and constructed. I would definitely prefer to have the original name in the text, then a translation in the footnotes. Those old Japanese gods were not named in artificial sounding modern English after all - those names were given in an old Japanese context still resonating in Japan today.

Heldt does the same to all place names as well. Izumo (in Shimane) for example is consistently called "Billowing Clouds" in his version. Only Yamato (the old area around Nara), he lets stand in the original.

In essence, Heldt's translation reads like a book on Japan consistently referring to Tokyo as the "Eastern Capital," to Shinjuku as "New Inn," to the Yamanote Line as "Foot of the Mountain Line", to Fukuoka as "Happy Hill", to Nagasaki as "Long Peninsula" and to Hokkaido as "North Sea District."

Sounds ridiculous? That's the way Heldt presents the Kojiki to his readers. Sure, Heldt includes a glossary at the end of the book and you can find the original names there. But only if you search under the English names given by Heldt. Thus, cross-referencing would be very difficult.

Chamberlain might have been a bit heavy on the footnote and explanation side, Heldt's book however contains no footnotes, no studied discussion on the meaning of names (extensively provided by Chamberlain), and of course no original kanji for the names. Let alone giving genealogical tables. Even his map of old Japan doesn't quite match his glossary of place names.

It's unlikely that yet another English translation of the Kojiki will be published soon. But the publishers would do interested readers a great favor by issuing an updated version of the Philippi translation.

The Kojiki: read a history of The Kojiki, Japan's oldest book and the subsequent translations into modern Japanese and history of this important text.

From the Japanese megalopolis to the vineyards of Alsace, the Chinese countryside and the Mongolian steppes, Jean Freund fills his Moleskine notebooks with his stories. He likes to take the

Have you been studying Japanese at evening classes? Have you installed apps to test your hiragana and kanji on your commute? Do you have a notebook with lines of words written fiercely?

The different kinds of manga

Manga covers a very large number of genres and is intended for almost every audiences in Japan. From adventure manga for teens to darker and more violent tales, there is something for everyone.