Noodling around Osaka: read a feature on raamen noodles in the Japanese diet. Including how to make and where to slurp noodles. 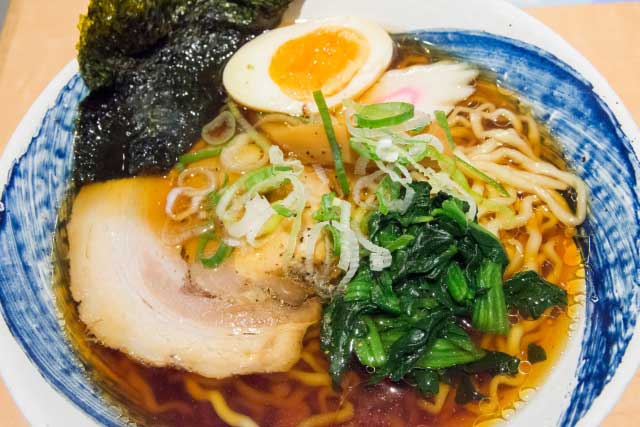 On the first of October, 2006, Oukura Yoshikazu practically glowing with pride, stood over a unique piece of pottery holding the very latest contribution to Japanese cuisine and told me "We want to make history."

He was talking about the noodle dish, called Dai Hanjo Ramen. Noodles might seem an unlikely choice in a bid for immortality, unless you realize that noodles have been entwined with Japanese cultural identities since at least the seventeenth century.

It wasn't until recently that Japan could produce enough rice to feed her entire population year round. Other staple foods have had to make up the difference. Wheat flour was made into thick noodles called udon. Buckwheat (soba in Japanese) grew in substantial quantities in eastern Japan, but was usually prepared as a kind of porridge.

In the Edo Period, a new technique made it practical to make buckwheat into noodles. Soba noodles suited the taste of Tokyo area's population so well that they became an unqualified success there. Western Japanese, on the other hand, maintained their preference for udon. So noodles became one of the many differences that define the cultures of East and West Japan. 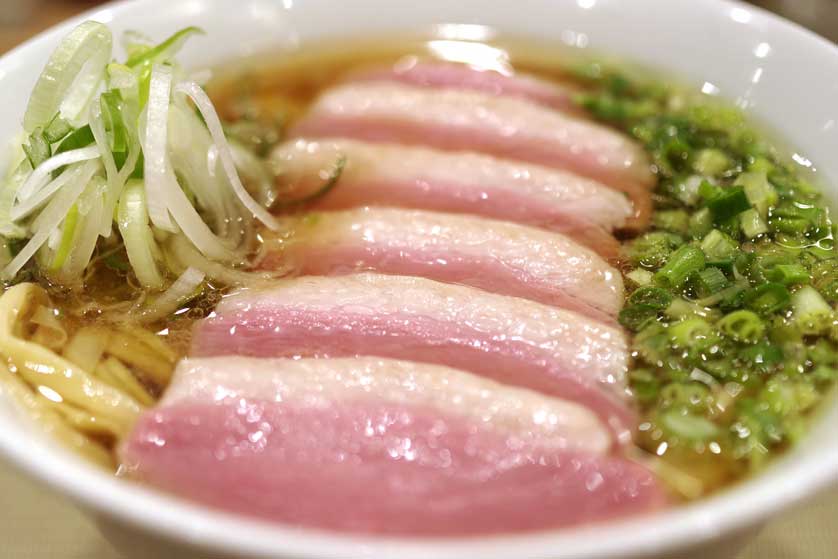 Ramen is a different kind of noodle that originated in China, and has its own color and texture, originally due to using water from Lake Kan in Inner Mongolia to make it. It was probably introduced to Japan around the same time as soba noodles, and as with most of the things they import, the Japanese redefined ramen to suit their own tastes. The Chinese noodles were complimented in different areas with broth and other ingredients that best satisfied the local populations, until the names of places became attached to different recipes for ramen.

Today ramen varieties cover the archipelago from Hokkaido in the north through Tokyo to Hakata, Kumamoto and Kagoshima in the South. These cities, and many others, have their own ramen namesakes. The city of Osaka, well known for her history and the engaging, entrepreneurial character of her population, has been a notable exception.

Connoisseurs of ramen have developed alongside the regional variations. Some are loyal to a particular variety (often the one from their home town). Others try to appreciate the wide spectrum of ramen variations. It was four such ramen lovers, or "ramen freaks" as Yoshikazu styles them, who came together to create Dai Hanjo Ramen. "We met," Yoshikazu explained, "at a kind of ramen fan club."

They were four ramen shop owners from Osaka Prefecture who dedicated themselves to filling the void left by history. They chose one other ramen enthusiast, Mr. Nishihara, a maker of noodles, to chair the group, and set themselves the task of inventing a ramen for Osaka.

They say it took six months of experiment and preparation to create the new variety. This is their formula for success.

First, the name. Dai hanjo, is a kind of word play, that takes advantage of the way ideographs from written Japanese can have more than one pronunciation. The first two characters, dai and han, are the same ones used to write "Osaka" (pronounced "oh" and "saka", in that case). The expression, hanjo, means "prosperity", and is ordinarily written with a different character representing han, but the last two characters can be read with the hanjo pronunciation. Similar to the intentional misspellings used in English advertising, it draws attention, and however you read it, associates Osaka with prosperity, and both of them with the new ramen. 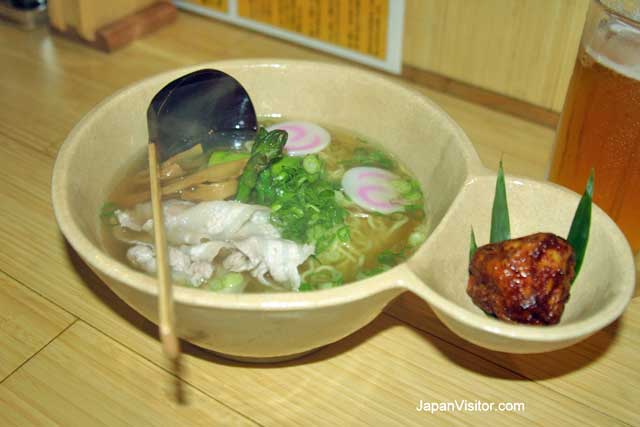 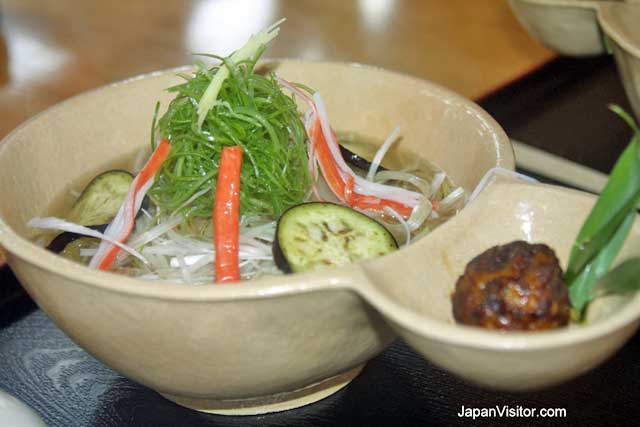 Then, there is the serving dish. It is made from clay taken from Osaka Bay. That gives it a light beige color, an unusual shade for a ramen bowl. What makes it truly unique is having not a single depression, but two: one large and one small. This gives it the overall shape of a two-lobed gourd, or hyotan in Japanese.

The hyotan is a symbol associated with Osaka city's founder Hideyoshi Toyotomi, but its history goes back much further. In nature, many hyotan grow on a single plant, and so it, too, came to represent prosperity. The Japanese expression, ''a horse from a hyotan," describes a thoroughly unforseen, fortunate event. Hideyoshi chose a large hyotan as his battle standard, and added smaller ones to it with each of his victories.

In the larger well of the hyotan-shaped vessel, the usual ramen ingredients (noodles. broth, meat, and vegetables) are assembled. The ingredients in the smaller well are what distinguish this ramen from its cousins. Most salient is a round ball that looks very like the batter balls surrounding little pieces of boiled octopus, called takoyaki, that were invented in Osaka and are such an enormously popular snack food, they have become an icon of the city. This one, however, has a different name. It is a hanjo maru (maru meaning "ball"). Instead of octopus, there is shaved kelp, a natural flavor enhancer, inside.

Over the hanjo maru is poured a sweet and savoury sauce whose main component is a soy sauce that is made in Sakai, a city in the southern part of Osaka prefecture. While eating Dai Hanjo Ramen you should, at a point of your own choosing, drop the hanjo maru into the broth, letting the sauce and kelp modify the flavor of the dish. Individuality and dynamism contribute to the characters of both the new ramen and the typical residents of the Osaka region.

Finally, there is the garnish. In the small well of the serving dish, along with the hanjo maru and sauce, are placed three leaflets of of a prolific species of bamboo. This is sasa, a symbol associated with Ebisu, a patron god of business people and fisher folk of the Osaka area. During the Toka Ebisu festival, in shrines dedicated to him, young girls wear kimono and proffer branches bearing the leaflets, calling out, "Buy these sasa and your business will prosper!" 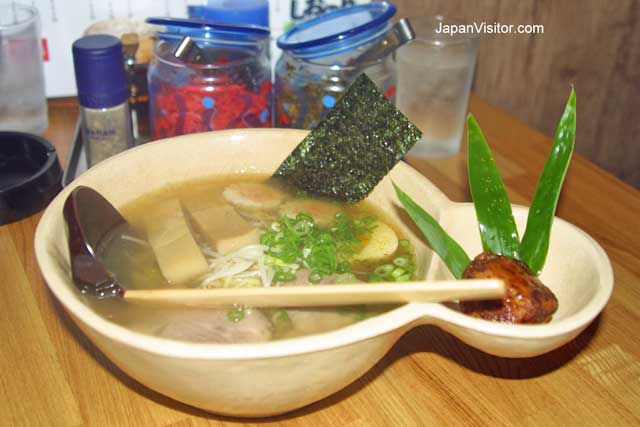 Whether Dai hanjo ramen will become Osaka's new namesake only time will tell, but if you have the chance, it is fun and interesting to taste what could be history in the making. You can find it at any of the shops run by its creators. They maintain a website at www.daihanjo.jp where you can find the locations, and they are hoping that more restaurants will begin serving Dai hanjo ramen in the future, both in Japan and in other countries.

In addition to being a source of information about Dai Hanjo Ramen, the website is step two of their plan. It provides a way for the inventors to collect the opinions of people who have tried Dai Hanjo Ramen and incorporate them into the recipe until it truly becomes Osaka ramen.