Purikura or Print Clubs: read about the Japanese craze of Purikura, Print Clubs.

What is Purikura? Not a Passport Photo Booth 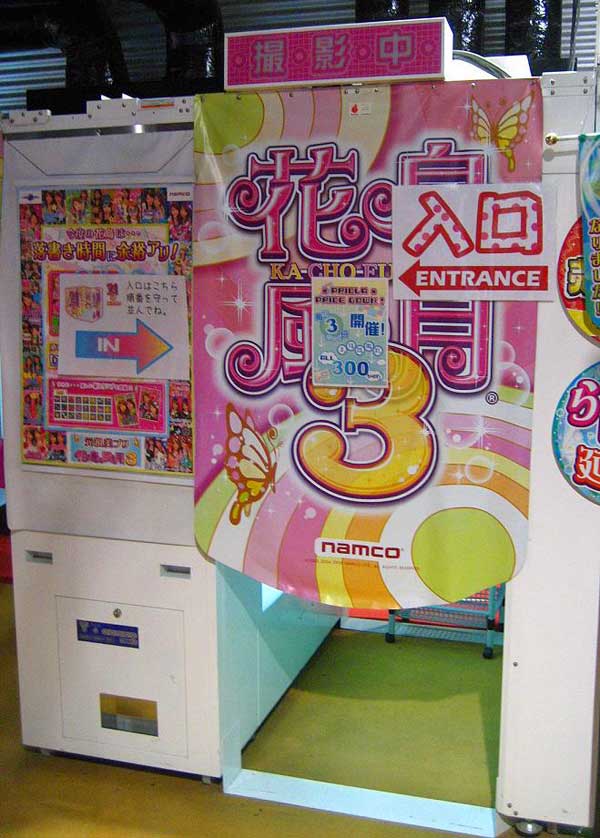 Puri-kura is short for "purinto kurabu" (Japanese pronunciation for "Print Club"). The term is actually a registered trademark, and refers to the photo booths where pictures are taken and the postage stamp-sized pictures the booths produce. Most of the pictures are printed out as stickers and used to liven up cell phones, notebooks, anything that will take a sticker.

Some booths are made to photograph two people, but some are larger to hold five or six, and it is possible to squeeze several people into the smaller booths to make for more humorous photos. Music is pumped into several of the machines, and some have props such as wigs to liven up pictures. They also offer various backgrounds and borders, and names or cute phrase can be written on the pictures before they are printed.

When did it all start?

It all started in 1995 with a photo booth that looked a lot like an arcade game. It was first developed by Atlus and Sega. Sasaki Miho came up with the Print Club concept in 1994. She based her idea on her school days' experiences of putting cute stickers of Japanese characters on her notebooks.

Why is it such a big part of Japan's pop culture?

When it was first introduced, there wasn't much interest. The J-Pop group SMAP gave Print Club photos of themselves to their TV program audience, and Print Club booths started to become popular. Other groups and idols followed SMAP's lead and started the craze. By 1997, teenagers wanted to collect as many of the photos as possible. In the spring of 1998, there were 25,000 Print Club machines, and many other copy cats on the market.

Who is making Purikura so popular?

Teenaged girls cannot get enough of these small pictures and spend anywhere from 400 yen to 4000 yen in an afternoon with their friends. Many times, there are long lines in front of the newest or most popular booths. This isn't about having a picture taken. It is a social outing with friends and a memory-making experience. Teenage girls have small photo albums full of these little pictures, and they exchange and trade them with their friends. It is not restricted to teenagers, and adults get into the excitement, too, particularly on dates.

Purikura machines are found in every game arcade. At least one floor is full of the colorful, noisy machines at most arcades. They are also located at any other bustling shop, department store, or mall where teenagers may hang out. One of the most popular arcades is the "Purikura no Mecca" in Shibuya, Tokyo. Any Sega arcade will have plenty of options, and many smaller venues line streets and underground malls packed with as many booths as will fit in the cubby-hole shops.

Purikura is not exclusive to Japan. Older Japanese machines can be found in arcades and small purikura-only shops in China. Taipei, Taiwan has the most machines per capita. There is a three-story building in Ximen (Taipei's youth fashion district) full of the most advanced purikura machines available.

How do you use the machines?

Once in the machine, money is inserted just like any arcade game. Then, the people pose for their photos. Usually, the appropriate buttons light up, there is a flashing light to let you know where to look and when the photo is being taken, and sounds to let you know when it has been taken.

Each machine allows for retakes. Some take a specific number, and the best photos are chosen as keepers from a screen showing all of the takes. Other machines take one photo at a time, and give the option of keeping each shot by offering the answers "yes" and "no." It is important to remember there is not an infinite number of shots, so the last one will be the printed copy if the first few are rejected in this type of machine.

After choosing the best photos, there is an opportunity to dress them up with backgrounds of sky, flames, or magazine and poster backgrounds. Each machine offers a variety of boards, and several colors of shapes and cut-out figures. There is a pen to write messages and sometimes pre-made messages to include on your photos. Keep in mind, that there is a time limit, so you might want to go into the machine with a friend who can read Japanese. It's not difficult to figure out, but there are a lot of choices which means a lot of screens of designs, colors, and art.

Once the desired photos have been chosen and decorated, the machine prints them out in a couple minutes. Most arcades have an area with scissors where pictures can be cut apart to distribute and share.

What are the past and present challenges?

At one time, young girls put their pictures up on the photo machines or bulletin boards nearby with their phone numbers inviting men for friendship or enjo kosai (financially-assisted relationships). This is now banned by the police. Still, purikura areas are places where older men attempt to pick-up teenaged girls. In some places, for example Shizuoka city, men are not allowed in the purikura sections of the arcades. There are large signs forbidding men to enter alone. Girls must escort their boyfriends into the arcade for them to be allowed in. These places do offer purikura machines for couples in other areas of the arcade.

What does the future hold for Purikura?

Now, some of the most advanced machines allow finished photos to be sent to cell phones, and then send to your friends. The next step is "videkura"! These machines will create short video clips that can be sent by cell phone or internet. One of the first debuted in April is Love & Berry. Mushi King and Naruto offer an opportunity for people to show-off their most impressive fighting moves. MYSQ stands for My Style So Qute and was created by Ututu, Co. This is a white photo booth that allows a person to create a video with effects and music. The video can be uploaded onto a cell phone and shared with friends. 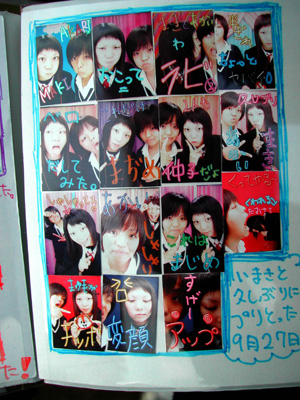