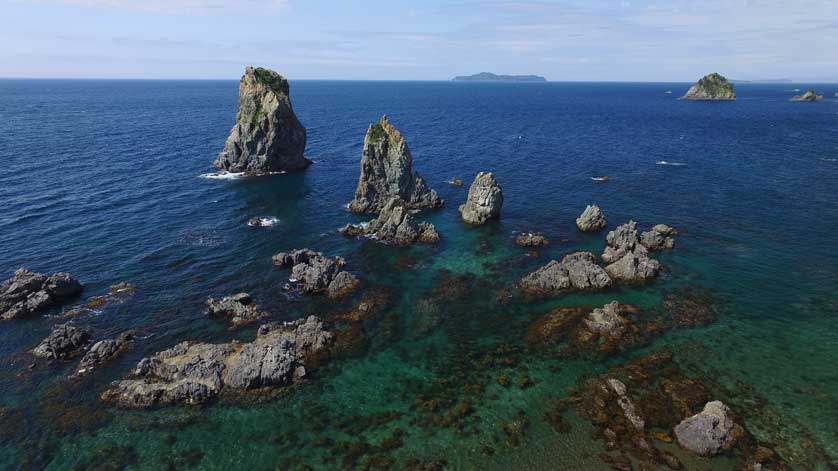 Yamaguchi round trip - 'The journey not the arrival matters'

It's easy to see getting from one place to another as just about getting there. But getting around in Japan is expensive, so you might as well make the most of it and enjoy the trip.

Spending some time in Yamaguchi, in the south of Honshu, we realized that it's quite possible to do round trips to some of the best attractions of the area using JR trains and buses - a bonus if you've got a JR rail pass and a pretty nice idea even if you haven't!

The first round trip (or maybe 'course', since we're in Japan) is from Yamaguchi city to Hagi and back through Shimonoseki.

The Yamaguchi Line runs all the way from Shin Yamaguchi (which is actually in the city of Ogori) to Yonago in Tottori Prefecture on the Sea of Japan. From Yamaguchi to Masuda is a trip through beautiful mountain country to the coast of the Sea of Japan.

The train passes through the onsen town of Tsuwano and a series of other small towns set in valleys and surrounded by hills. A local train will take about two hours while the Limited Express Super Oki takes about one hour and 20 minutes.

At Masuda change trains to the San-in line from Masuda to Higashi Hagi. This one-hour trip along the San-in coast shows the Sea of Japan in all its picturesque aspects, as the railway line is very close to the sea for most of the trip.

Soon after leaving Masuda the train passes beaches with swimmers and wind surfers - a beach side hotel near Toda Kohama is a tempting sight. After that the train winds its way past classic rocky islands just off the coast, small towns located around harbours and trees close enough to the line to the brush the train windows.

The San-in line very much a local line - the train consists of one carriage, and some of the other passengers are likely to close the curtains so they can read their cell phone screens in peace rather than watching the perfect scenery. 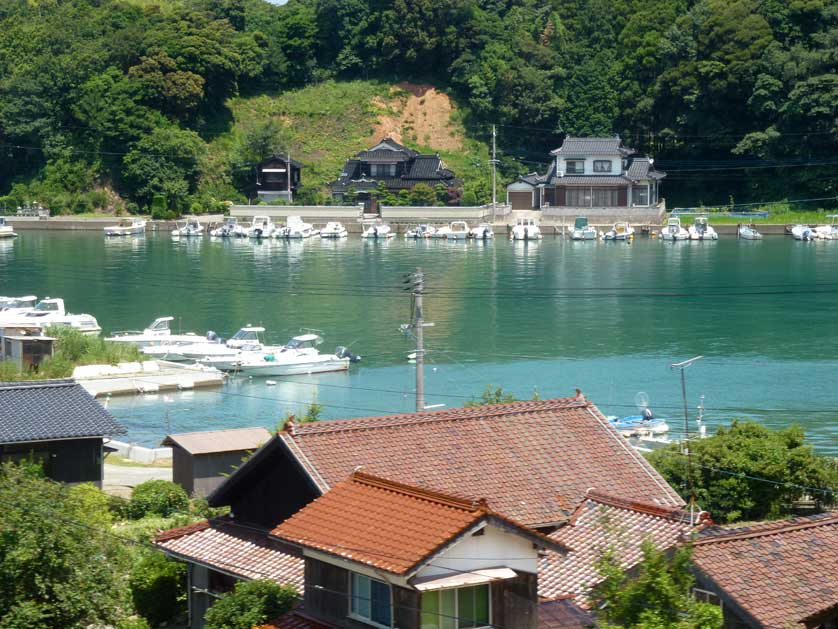 The prefecture offers some beautiful coastline 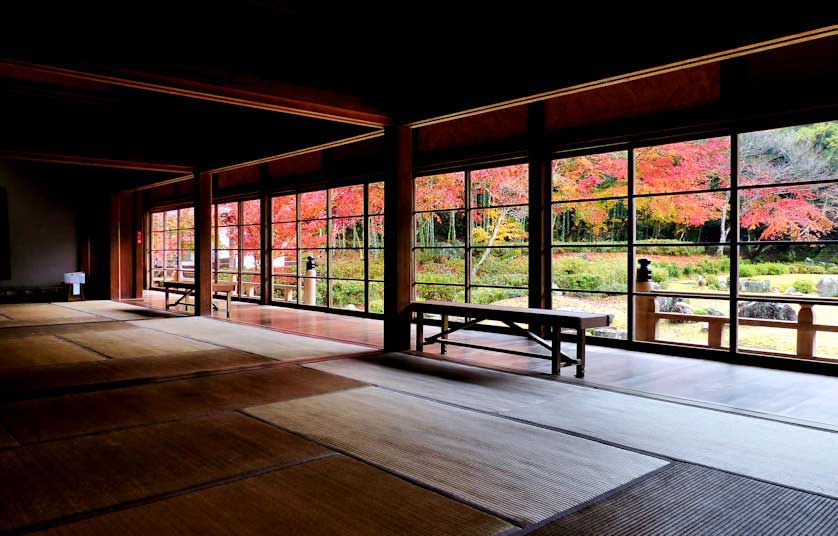 The extremely helpful tourist office at Highashi Hagi Station can provide an English language map and all sorts of advice. A great way to get around Hagi is on the circular bus that travels on two routes around the town, intersecting at several points.

The bus following the orange route leaves from a stop across the river from the station and takes easily to the samurai quarters, museums and Hagi Castle area. The blue bus route leaves from Higashi Hagi Station and initially heads off in the other direction, to extremely popular Hagi Seaside Market, a fresh fish market where you can browse and eat.

The bus then heads up the hill before turning back and making its way through the centre of town and then the popular Kikugahama Beach. Both the orange and blue route buses stop at Hagi Station, which is the next station on the San-in line but less central than Highashi Hagi.

To return to Yamaguchi take the JR bus that leaves from Higashi Hagi Station or Hagi bus center. The expresses take about an hour, the others an extra 17 minutes and also call in at Hagi Railway Station on the other side of town. Both express and non-express buses take you through more beautiful mountain scenery, although the local bus also wends its way along rivers and through small towns.

This trip takes a day, but you can take longer and continue around the coast to Shimonoseki and back to Yamaguchi by train or bus. It's worth stopping at Nagatoshi, about 40 minutes from Hagi on the San-in line and taking a boat trip around Omishima Island.

These small to medium sized boats leave from Omishima Seaside Park and take passengers for a cruise around the spectacular rock formations on the coast of the island. There are several routes of varying length, although some are not available if the sea is rough.

From Nagatoshi the San-in line continues around the coast, taking about two hours to arrive at Shimonoseki. It's not quite as picturesque as the trip between Masuda and Nagatoshi, and you need to change at Kogushi, but it allows you to spend some time in Shimonoseki. 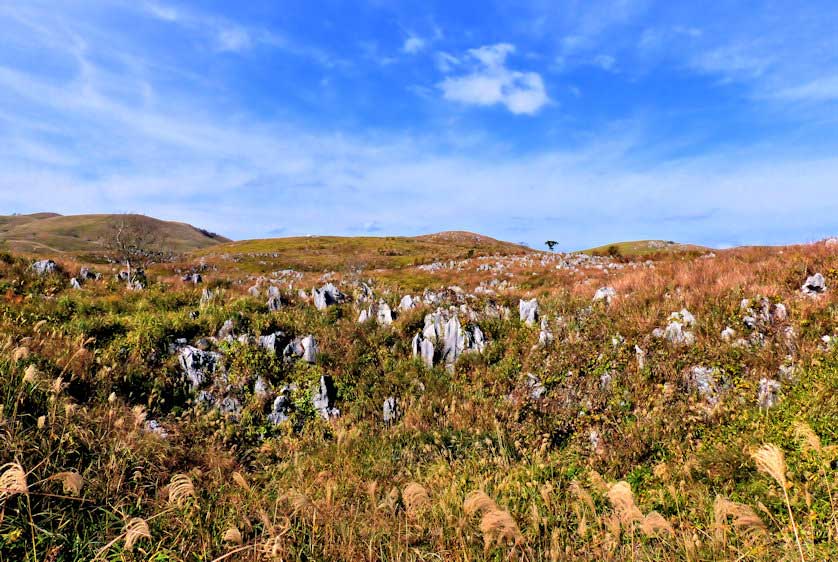 Akiyoshi-dai is the largest karst in Japan, encompassing about 130 square kilometers in area 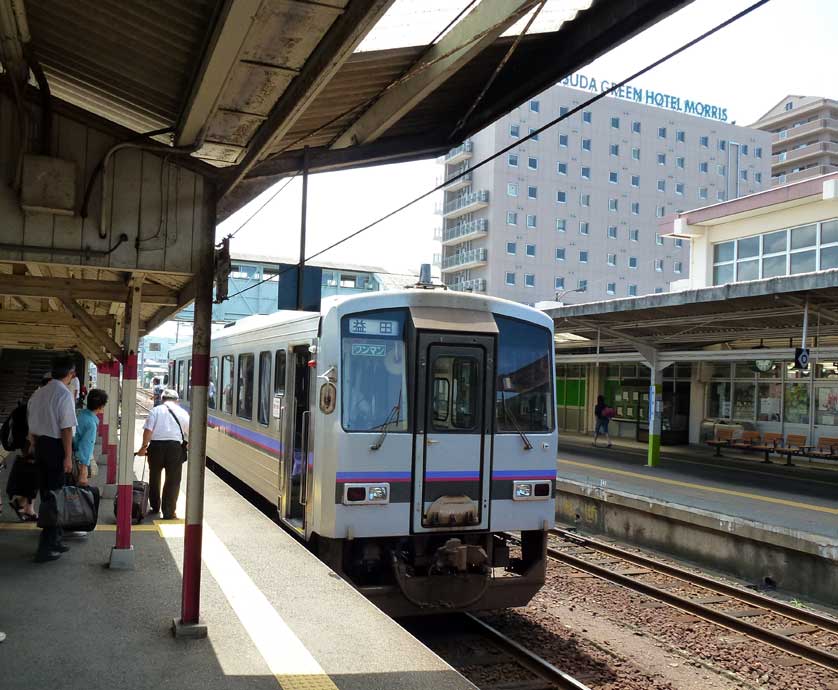 After taking in the sights of Shimonoseki such as the Karato fish market you can return to Yamaguchi city either by train or bus. The trip from Shin Shimonoseki to Shin Yamaguchi is about 30 minutes on the shinkansen, and from then it's another 20 minutes back to Yamaguchi on the Yamaguchi line.

It's also possible to take the ordinary train on the San-yo line from Shimonoseki to Shin Yamaguchi, taking about an hour. The other (non-JR) option is the Sanden express bus that runs four times a day.

The Sanden express bus leaves from Shimonoseki Station and stops at several other stops in Shimonoseki, including Karato, before travelling inland along the Chugoku Expressway back to Yamaguchi. This is slightly more expensive than the train, but can be a relaxing and convenient way to round off your Yamaguchi round trip.