Omi-watari is the phenomenon of ice formation at Lake Suwa in Nagano Prefecture.

When temperatures commence dipping towards zero in late autumn, snow season is ahead. Winds blasting in from the north carry glowering grey clouds, whip flakes of snow through the air, and the temperature falls.

Snow falls in an almost endless variety of ways: sometimes in a peppering of fine, hard pellets, sometimes wafting through the air like goose down, like miniature pieces of an all-white quilt eager to assemble itself; at times the flakes seem in an earthbound hurry, while on occasions they seem reluctant to allow gravity to control them and dance on subtle currents that allow them to rise as well as fall. 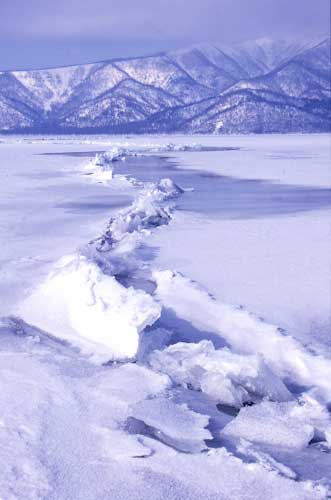 The first winter storms bring snow that rarely lasts, but that first snow layer helps cool the ground surface where it gathers and the lake water into which it falls. The falling temperatures, frosts and snows bring ice to riversides and to lake shores.

As magical as the falling snow, are the varied impacts of falling temperatures. Forests and mountains not only feel different as they become colder, but they sound different too. A skin of ice on a drying puddle, cracks and tinkles like the breaking sound of fine glass; but as temperatures continue to fall and freezing is sustained, pools and streams freeze over and then crack with more ominous shattering sounds.

When freezing days are added to freezing nights and weeks of winter accumulate then lakes too begin to freeze over; the transition can be startling. The night on which a lake first freezes over, is not merely tangibly cold, it is audibly cold too. The sounds are surprising, symphonic, like a radio-sound workshop run wild; crackles, whizzes and pings break in on soothing melodious tones, while distant sounds create images of a stage-hand experimenting with a thunder board and a caged lion. Ice formation generates sounds that thrill, but river ice, particularly close to the sea where the tide pushes the ice upwards, is an entirely different experience. 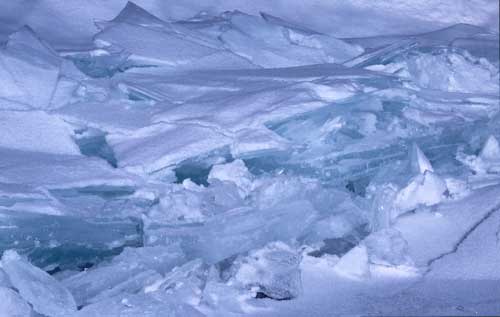 Ice cracks, contracts, expands and uplifts along the pressure line across the lake 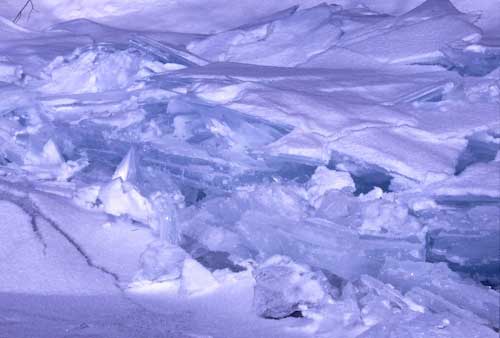 Rising and falling river ice freezes from above and below, creating, in some winters, a layer thick enough to drive a truck across. But mid-day sunshine thaws the uppermost surface allowing puddles of water to form, these later freeze of course as dusk approaches and repeated day after day this can lead to finely multi-layered ice like the best flaky pastry. Step there, and layer after layer of fine ice shatters and explodes, pieces skittering of in all directions.

Pressure ridges form in the thick ice where cracks form down the river as it rises with the tide. As the tide drops again, whole sections of ice shift and settle, letting off ominous-sounding crunches and cracks. But that is as nothing compared with the sounds of sea-ice.

Where lakes freeze over legends abound relating to the strange patterns that emerge. The early stages of freezing may leave parts of the lake ice free, where the wind can whip at the exposed ice-edge, breaking it into drifts of tinkling glass-like pieces, or driving slabs of thicker ice sliding over each other piling up a thicker and thicker surface.

Once the whole lake surface has frozen things change again, now silence predominates, and snow can accumulate on the ice. However, as temperatures fall at night ice contracts, and as temperatures rise again during the day it expands. During the period of contraction, linear cracks and fissures appear and may run for kilometres across large lakes such as Lake Suwa in central Honshu or Lake Kussharo in east Hokkaido.

As the ice begins to expand again during the relative warmth of daytime, the great cracked sheets meet again and are forced together by expansion, their edges collide and rise upwards, cracking and breaking into a jumble of jagged ice fragments that form a ragged ridge across the lake that may continue for many kilometres in a form known as Omi-watari. 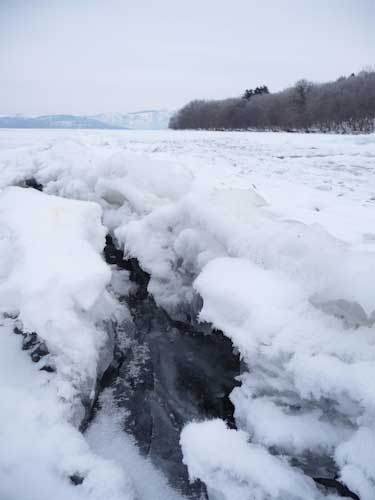 Near the shore, the wind pushes layer upon layer of ice up into stacks during the early phase of the lake freezing over. Later in the winter these layers split and crack open becoming part of the Omi-watari

Not to be confused with Oni, which are fearful demon spirits or devils, Omi are gods, and the name Omi-watari relates to the gods of Lake Suwa in Nagano Prefecture. When the god Takeminakata-no-kami of the Upper Suwa Shrine, walks across the frozen lake to visit Goddess Yasakatome-no-kami of the Lower Shrine of Suwa Taisha in winter, he leaves behind a trail of his passing - the Omi-watari. The presence of Omi-watari was considered a sign by local people, indicating that if it was safe for a god to cross, then it was safe for them too and they went out on to the ice for ice fishing.

The oldest official record of Omi-watari dates back to 1397, and each winter, to this day, at a ceremony before the Yatsurugi Shrine, in Suwa City, in February, the presence or absence of Omi-watari is reported before the altar by the priests, and the pattern of Omi-watari is used to foretell the weather and the harvest.

Winters when the lake fails to freeze and there is no Omi-watari are described as Akenoumi and in recent years Akenoumi have outnumbered Omi-watari (there were 15 Akenoumi in the twenty years from 1989-2008, with local and global climate change patterns considered to be the culprits.

Standing astride a blue-white crack in lake ice, hearing the sounds of crashing and crunching beneath, and seeing the rising slabs of jagged ice snaking out across a frozen lake make for a dramatic experience, and make a winter visit to Japan's north country particularly rewarding. 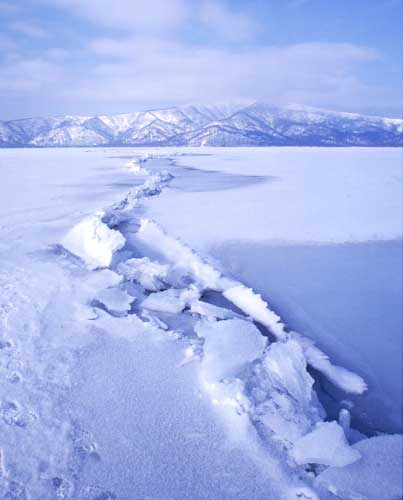 Omi-watari are a disappearing feature of winters in Japan, becoming more difficult to see as the winters become milder and lake ice thinner 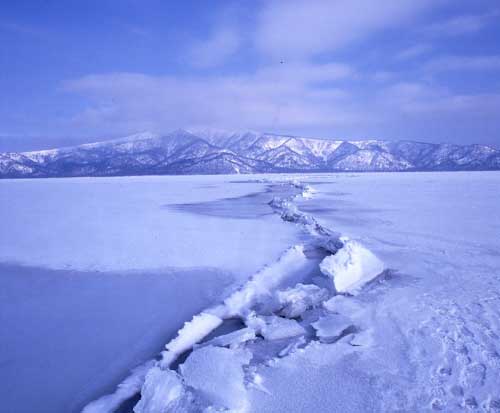