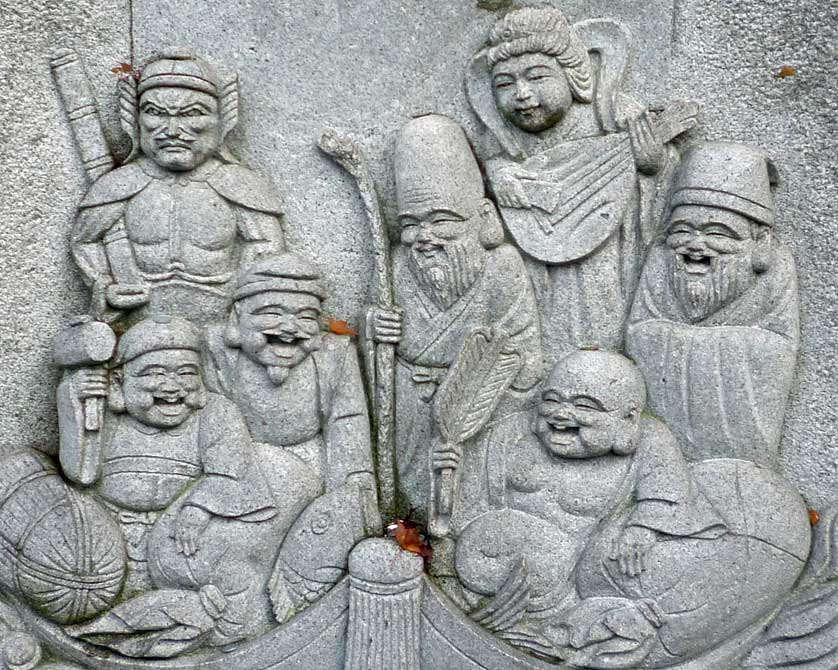 Japan's pantheistic Shintoism, its embrace of Buddhism, and its current tolerance of Christianity and a wide range of cults, indicate a certain national openness to religions and spirituality of very different kinds.

Even within one human lifetime, individuals call on different traditions, typically dominated by Shinto ritual, yet incorporating superficial elements of Christianity for weddings and reverting to Buddhism for funerals.

This makes it difficult to ascertain to which religion any one Japanese person belongs, as adherence to one is neither strict nor expected. After all, even the most out-there fashionistas rarely pursue one designer or brand to the exclusion of all others, and so it is with religions.

Shinto shrines and Buddhist temples are the most visible manifestations of Japanese spirituality, yet away from those one often encounters other iconic references that suggest a spiritual belief system not entirely religious. 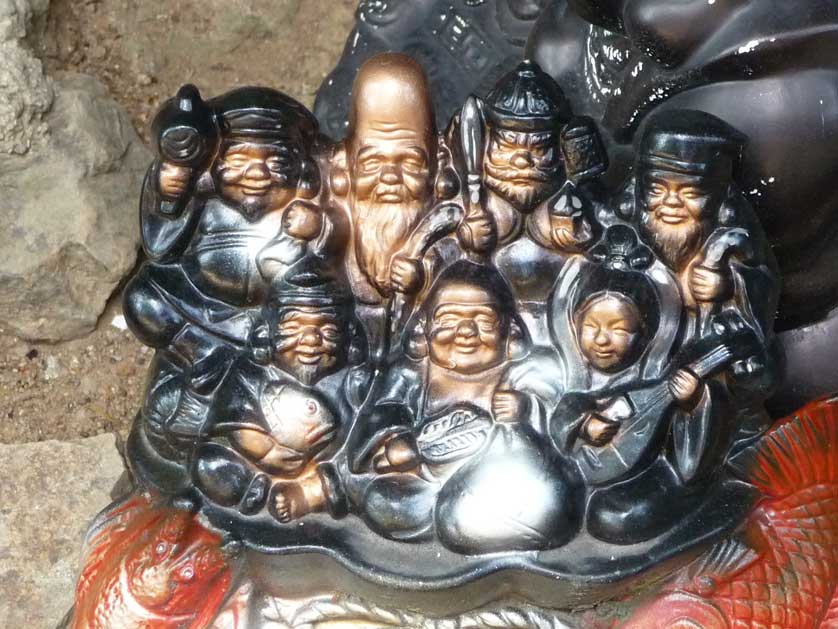 From street corners, to temples, outside businesses and private houses, look out for clusters of ancient characters these are the Seven Lucky Gods.

Beside a shop, adorning a street, or in a park, statuary of a different kind can be found suggesting very different spiritual associations. Such statuary, if it stands outside a drinking establishment and depicts a pot-bellied creature standing on its hind legs, wearing a large straw hat, carrying a bottle of sak in one hand and a notebook in the other, is of a Tanuki (a raccoon-dog). Likewise, if you spot a cute cat icon inside a shop, business or home, with one or both paws raised in the Japanese beckoning posture (palm facing forwards, fingers down, it is a Maneki-neko (a beckoning cat).

If you come across a statue of a group of seven figures, mostly chubby-cheeked and elderly, one carrying a fish, another a stringed musical instrument, one with an enormously enlarged bald head, then you have stumbled across a very different kind of icon.

These figures represent the seven deities of good fortune, sometimes called the Seven Lucky Gods, and they are often shown travelling in their treasure ship or Takarabune.

In Japan, visits to shrines or temples focus around purification and presenting offerings, such as coins or emato the deities in return for the granting of prayers or wishes. The Seven Lucky Gods provide a different avenue for the pursuit of one's goals.

Today, the seven, an international and eclectic group of deities from India, China and Japan, usually include: Ebisu, Daikoku, Bishamonten, Fukurokuju, Jurojin, Benzaiten, and Hotei.

However, as Fukurokuju and Jurojin were often considered to be one and the same Taoist deity, one of them is often substituted for by the goddess Kichijoten, or by the mythical creature known as Shojo.

The seven, tradition would have us believe, will sail into town at New Year distributing gifts to the worthy, and this belief is retained in the custom of giving children gifts of money at New Year in envelopes marked with an image of the Takarabune (treasure ship). 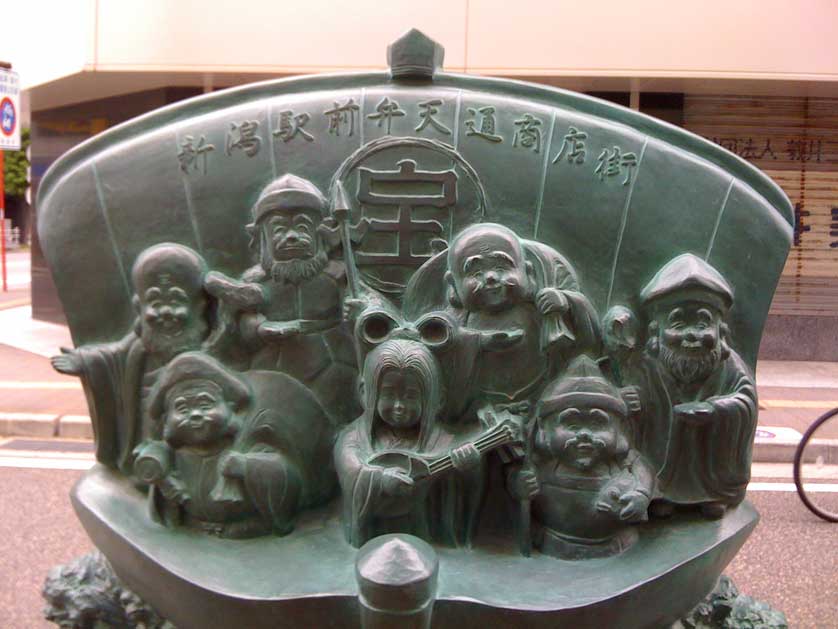 Commemorated in ceramic and metal, statues of the Seven Lucky Gods reveal the superstitious side of the Japanese population. Amulets, talisman, and even mobile phone 'charms' indicate a willingness to rely on the gods for good luck.

History of the Seven Lucky Gods 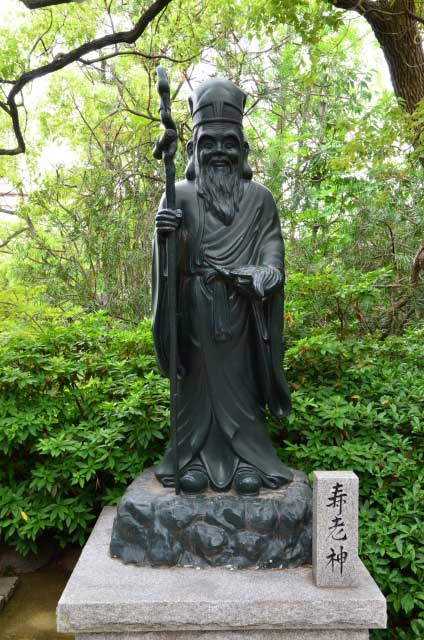 The cult of the Seven Lucky Gods seems to have originated during Japan's Muromachi Era (1366-1573), though the emphasis on seven spans many of the world's cultures.

Seven crops up in so many culturally significant phrases, that it appears to be a kind of international sacred number.

We dream of seeing the 'seven wonders of the world', when we are ecstatic we are in 'seventh heaven', we explore the 'seven seas', Christians fear the 'seven deadly sins'; seven heavenly bodies (sun, moon, mars, mercury, jupiter, venus, and saturn) stand for the 'seven days of the week'.

There are seven Buddhist treasures or jewels, and death is followed by seven weeks of mourning, while seven crops up (along with three and five) in poetic form, in Shinto rites of passage (Shichigosan), in now classical films (Seven Samurai), and in defining lists of important herbs, flowers, spices, and forms of luck. 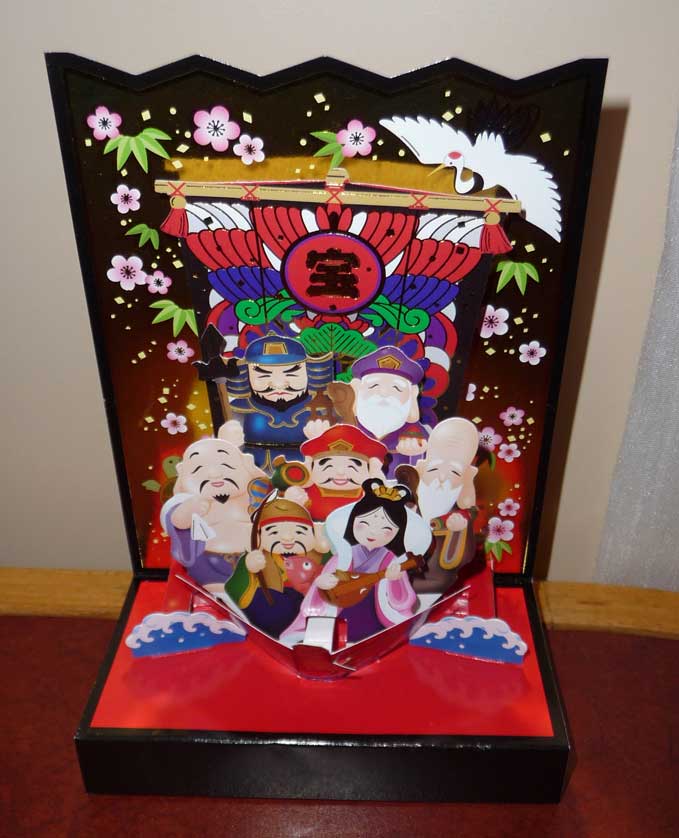 A colourful paper cut-out card pops up to reveal a treasure ship with its passengers - the Seven Lucky Gods. 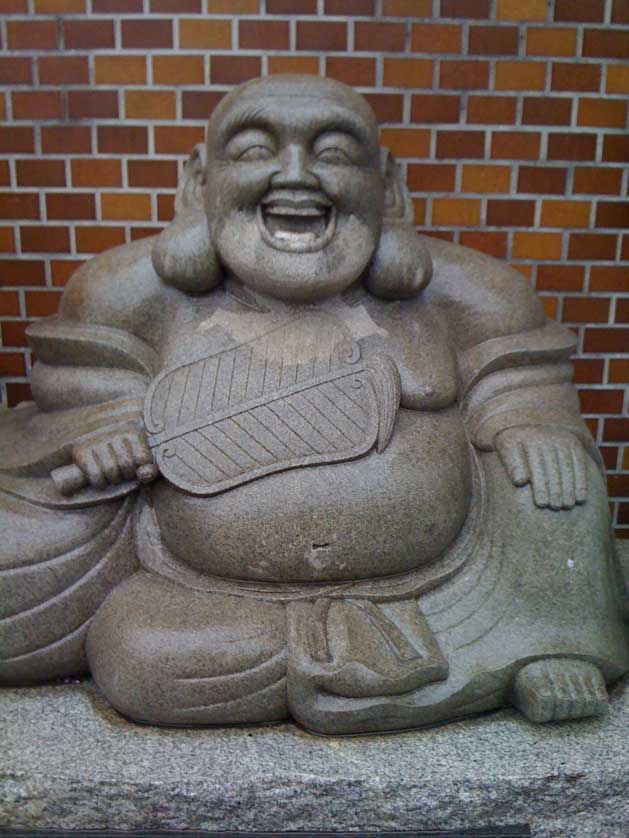 Beside a road in Abiko, Chiba Prefecture, sits a stone statue of rotund and jovial Hotei, the god of abundance and health.

The eclectic nature of the Shichifukujin is revealed not only in their countries of origin, but also in their traditional associations. Three belong to India's Hindu-Buddhist pantheon; three are from China's Taoist-Buddhist history, and just one belongs to Japan's Shinto tradition. It seems that grouping them together originated in Japan, but quite why or how they became so popular is now unclear. Their attributes are, however, clear and each is different.

Japan's contribution to the lucky seven, Ebisu, is the god of fishers, merchants and agriculturalists, who is often depicted carrying a red sea bream, and appears alone adorning the label of an excellent Japanese beer.

The Chinese contributions are: Hotei, the god of abundance and health who appears rotund and contented; Fukurokuji the god of wealth, happiness and longevity, and Jurojin, also god of longevity.

From India, we have: Daikoku (or Daikokuten), the god of business, trade and wealth; Bishamonten, the god of warriors, and Benten-sama (or Benzaiten), derived from India's water goddess, now in Japan revered as the 'patron saint' of music and wisdom, while also representing art, knowledge and beauty.

Japan's more recent contribution, ensuring that another generation takes the powers of the Seven Lucky Gods to bring good fortune seriously, was the anime story by Kawasaki Hiroyuki, which was made into a television series called 'Happy Seven'. The story was about a school club with seven girl members, each with a different power, from - you've guessed it - the Seven Lucky Gods. 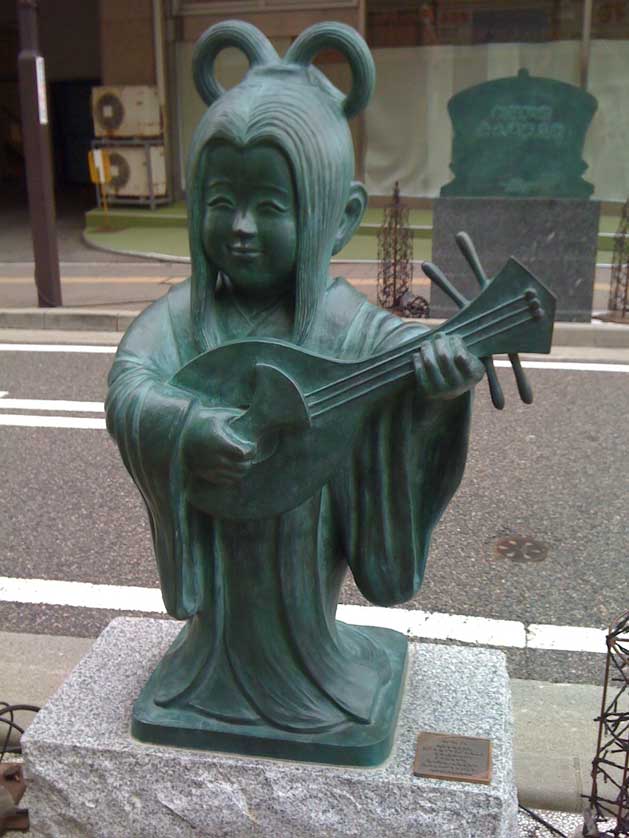 Benzaiten's origins are as a water goddess in India. This member of the seven gods, also known as Benten-sama, is revered in Japan as representing beauty, wisdom and the arts. 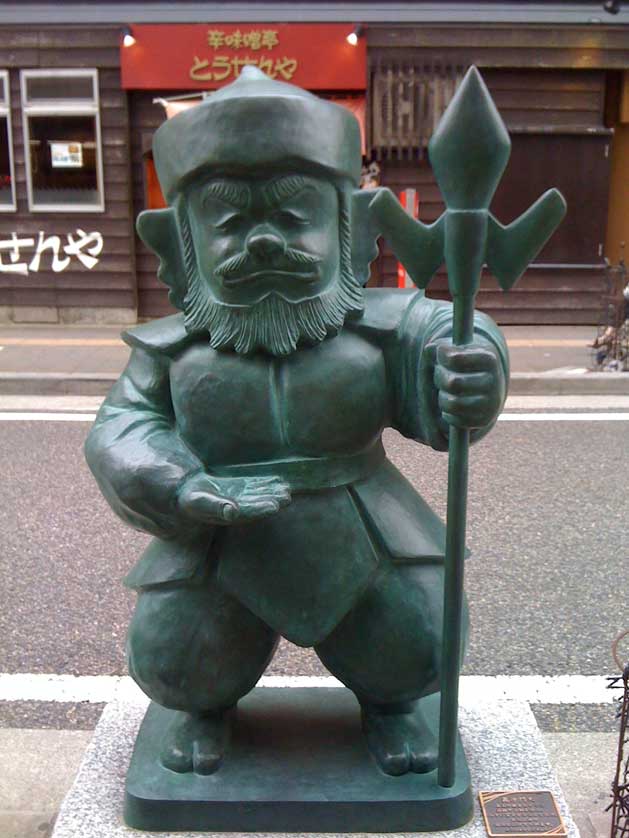 Bishamonten - the deity revered by warriors.