Tomb of Christ Shingo Aomori キリストの墓, 新郷村: Most people believe that Jesus Christ died on the cross at Golgotha in Jerusalem over 2000 years ago. Not so, according to legend in the far north of Japan in the small village of Shingo in Aomori Prefecture.

Most people believe that Jesus Christ died on the cross at Golgotha in Jerusalem over 2,000 years ago. Not so, according to legend in the far north of Japan in the small, remote village of Shingo in Aomori Prefecture. 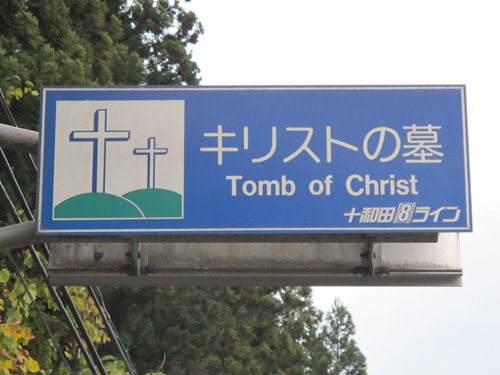 Claims that Jesus did not in fact die on the Cross in Jerusalem but that his brother, known in Japan as Isukiri, took his place began in the 1930's, with the "discovery" of an ancient divine text. Jesus supposedly fled to the Tohoku region of Japan via Siberia and took up rice farming, living to the ripe old age of 106. 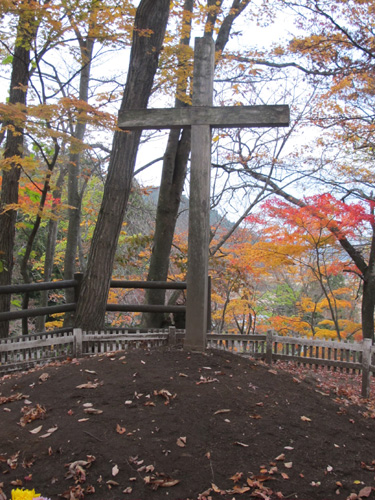 The tomb of Jesus Christ in northern Japan

Now the site of the Tomb of Christ consists of two wooden crosses marking the tombs of Jesus and his brother, a meditation path and a museum housing the sacred documents and other exhibits (see below). There's even a commemorative stone from the Israeli government marking the spot, no doubt glad to wash their hands of any inherited historic responsibility for Christ's torture and execution, for which Jews have been blamed over the centuries. 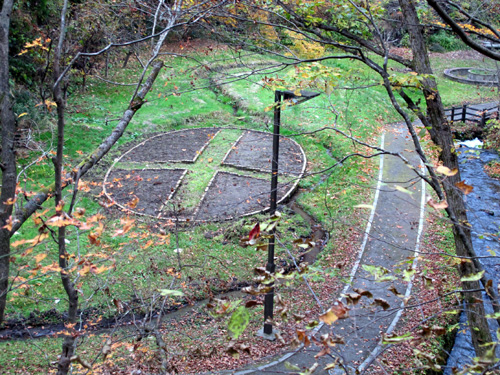 Shingo village is a long, winding 31 km along Route 454 off Route 103 from Towado-ko. Nearby are the equally mysterious Oishigami Pyramids, supposedly predating the Egyptian Pyramids. Total nonsense of course as they are a grouping of boulders, but let's not let the truth get in the way of a good story. 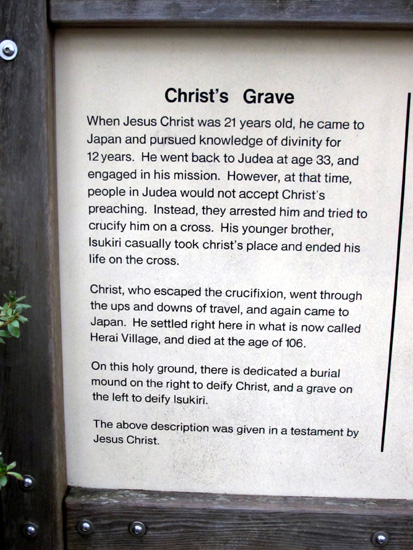 Explanation of the legend of Jesus in Japan

One explanation for the Tomb of Christ appearing in northern Japan is that a local "Hidden Christian" (Kakure Kirishitan 隠れキリシタン) in the Edo Period had passed himself off as The Saviour in a fervor of religious belief and these old, half-remembered tales formed the basis of the "sacred documents" later revealed in the tempestuous, seemingly apocalyptic times of the 1930's.

Tombs of Jesus Christ and his brother Isukiri in Shingu, Aomori, northern Japan

The museum (see photograph above) at the site has bi-lingual exhibits on the legend and seeks to explain its origin. These include the strange local dialect, the habit of outlining a cross on a child's head before it first leaves the house an, supposedly "foreign" looking locals. The museum also has information on other mysterious places in Japan and other countries including the above mentioned Oishigami Pyramids.

Tomb of Christ photographed in 2019

Shingo is not easy to reach unless you have your own transport, such as a hire car. It is a 45 minute drive along winding roads from the eastern shore of Lake Towada or west from Hachinohe. Part of the road from Towada-ko to Shingo closes in winter. There are buses from Hachinohe operated by Nambu Bus to Gonohe and then change to a Shingo town community bus.

Map of the site Tomb of Christ map

Mount Chokai is a still active volcano located between the prefectures of Yamagata and Akita, in the Tohoku region.

Hakkoda-Towada Gold Line: This 8 kilometer walk or drive between Sukayu Onsen and Yachi Onsen in Aomori Prefecture is lined with high snow walls and opens in early April.