Chichibu Night Festival (秩父夜祭 Chichibu Yomatsuri) is one of the biggest festivals of the Kanto area. The festival takes place in early December and compares to Gion Matsuri and Takayama Matsuri with large floats pulled through the streets.

The Chichibu Night Festival, Chichibu Yomatsuri in Japanese, is one of the biggest festivals of the Kanto area. It takes place annually on December 2nd and 3rd in Chichibu, a city in the mountains of western Saitama Prefecture and a mere 74 minute train ride away from Ikebukuro Station in Tokyo on the Red Arrow Limited Express. 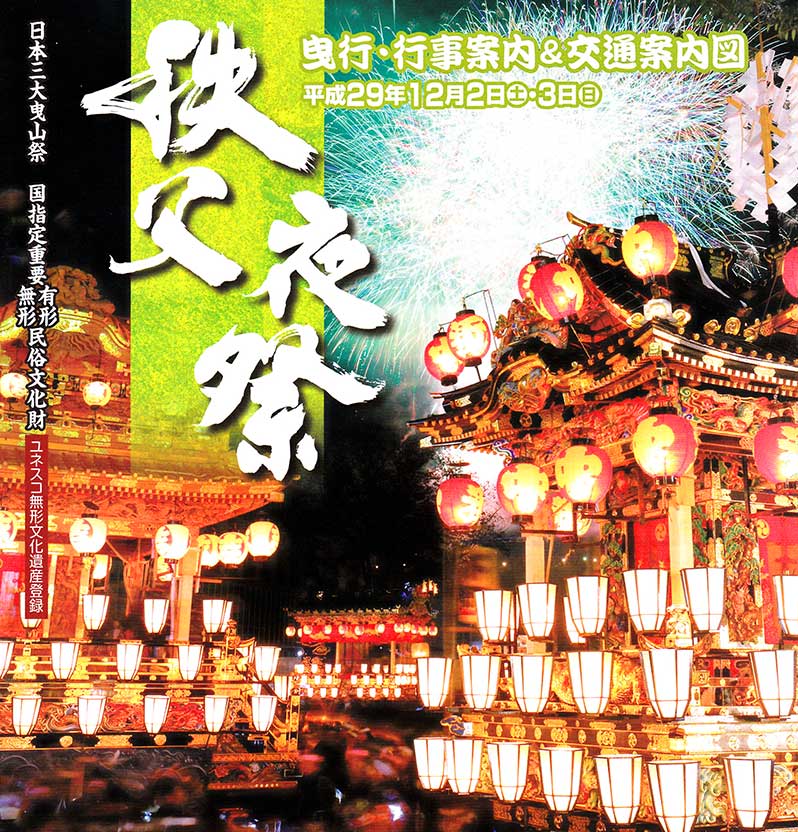 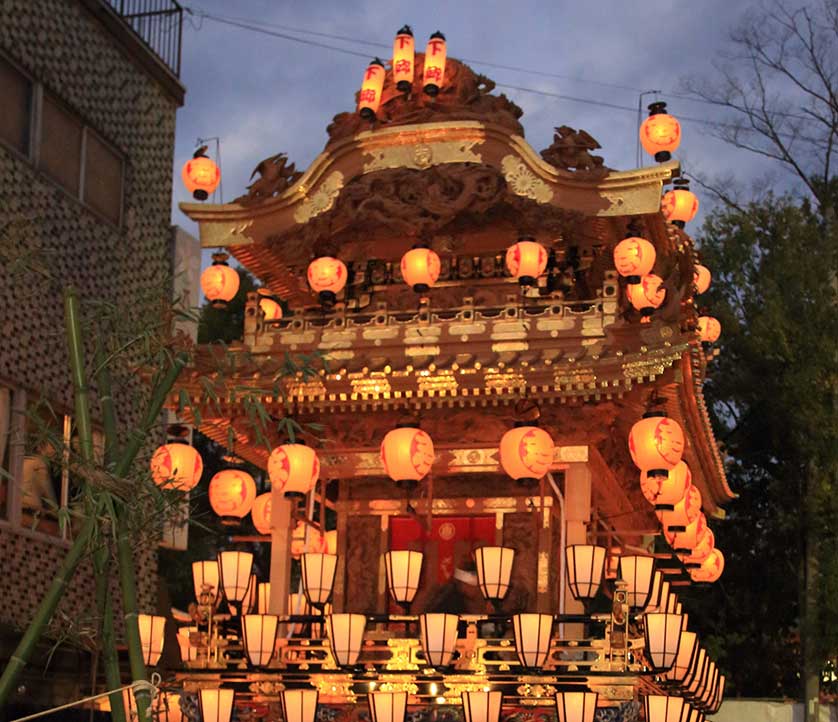 The Chichibu Yomatsuri is a float festival - six brightly lit up and ornately decorated yatai floats are paraded through the city, the colorful celebrations culminating with grand fireworks.

In scope and design the festival is similar to the Gion Matsuri in Kyoto and the Takayama Autumn Festival in Hida Takayama, Gifu Prefecture. Those three festivals are often mentioned in the same breath by travel commentators and summed up as the "most beautiful festivals in Japan".

Of those three festivals, the one in Chichibu is the only that takes place in winter.

Though it's already very chilly in Chichibu in early December, it is extremely rare that snow is falling at that time of the year. Experiencing the festival with the city covered in snow would add a whole other dimension to it.

December 3rd is the main day of the festival. A few minor ceremonies take place during the daytime but most visitors arrive at sunset. The many food stalls and make-shift tent restaurants lining the streets of central Chichibu make brisk business then. All sorts of Japanese festival foods are available from fried ayu (a river fish) to fried meat of all sorts to yakisoba and chocolate-covered bananas.

Indeed, it is a wise choice to arrive in the early evening and to enjoy some of the foods before the celebrations begin. The schedule gets busy later in the evening. 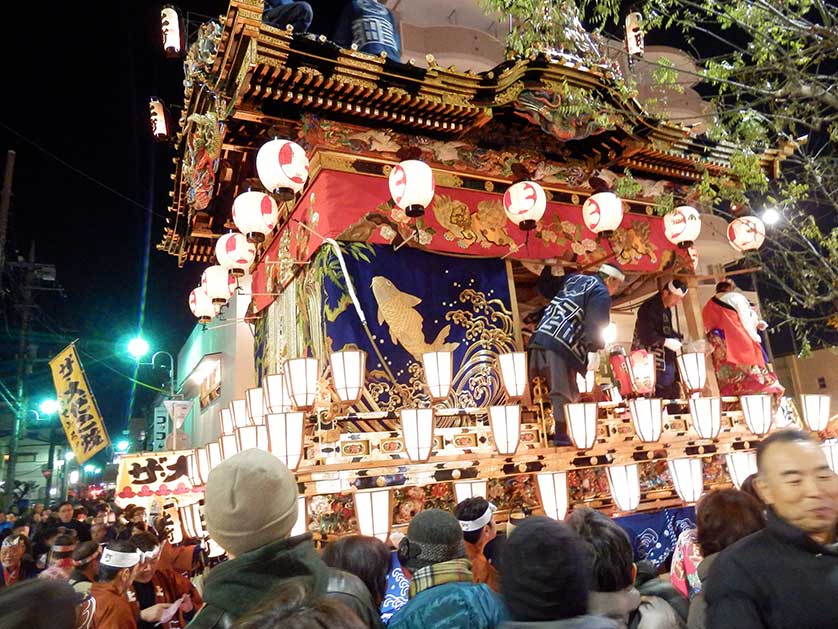 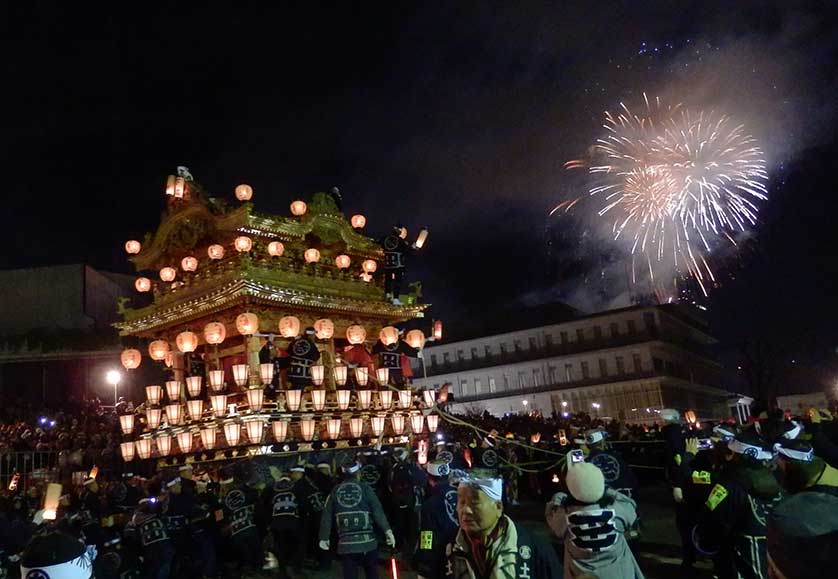 A little after 5 pm, the yatai floats are taken out of their respective exhibition spaces and begin to move through the city. It is quite a spectacle. To the sound of taiko drum and flute music, the yatai, lit up by multiple lanterns and manned by cheery, lantern-waving young people, are slowly pulled by volunteers through the neighborhoods, using thick ropes to move the 10 - 20 ton floats.

All overhead cables and regular street lights have been removed to allow the smooth passage of the floats. Instead, extra-high and extra-bright street lamps have been temporarily installed.

It still can happen that branches of a road-side tree interfere with the movement of a yatai. Situations like that are treated with humor and quickly solved.

The crowds are thick around the yatai. As the parade with its many stops goes on, however, it is easily possible to get a very close up view of the floats.

Taking Position for the Finale

The grand finale of the festival takes place in front of Chichibu City Hall. From there, guests with tickets reserved a long time in advance can take the whole view in from seats on an auditorium erected for the occasion.

Those arriving without any such ticket need to crowd into one of two little side streets on the upper end of the Dango Slope. The street lending views from the City Hall side will become a wall of people early on. Chances to watch the ceremonies are better from the street on the opposite side, though from there you won't be able to see the eventual lining up of the yatai. 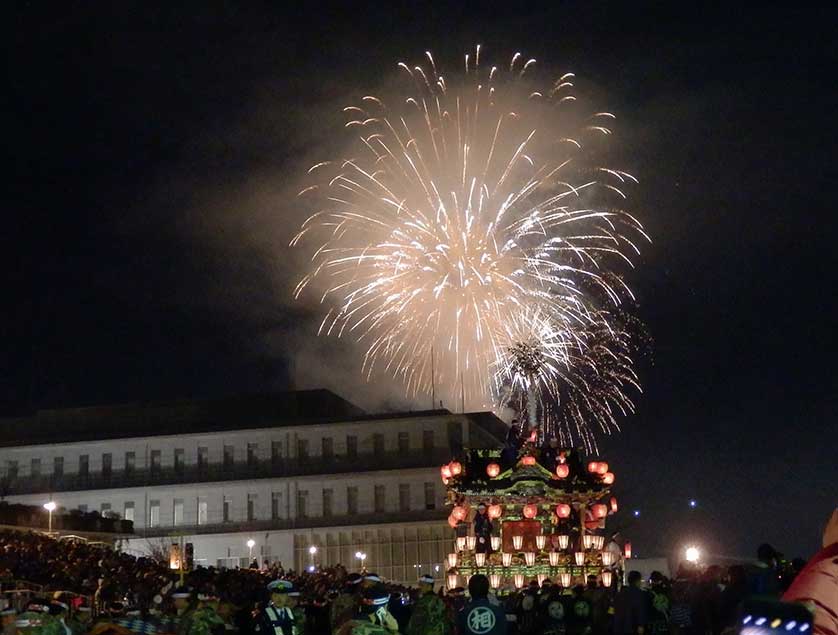 The Dango Saka is a steep slope leading up to the main plaza in front of Chichibu City Hall. Pulling the yatai floats up that slope is the most difficult part of the parade. Cheered on by thousands of onlookers, the floats will finally make it to the large square. Fireworks start exploding once a float arrives on the square and moves to its center. Then, after a short pause to give the float a chance to change into a resting position, the fireworks fly up again.

Before the next yatai arrives up the slope, the previous one will be parked opposite City Hall.

People standing on the opposite side of the plaza still get the benefit of being able to watch the single yatai against a background of bright fireworks high up in the air.

The ceremony lasts from about 7.30 pm to 10 pm. Enough time to eventually slip into a good viewing position no matter how big the crowds are.

Walking back to the train station after all is over, the many food stands and tent restaurants are still crowded. By people, one would assume, who have seen the grand ceremonies once before and who now just come to enjoy the relaxing parts of the festival: sitting down, eating and drinking with friends while the yatai travel by and the fireworks go up in the distance. 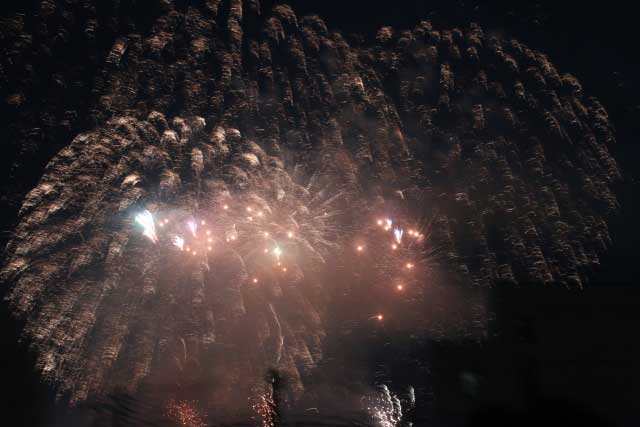 Fireworks at the grand finale of the Chichibu Yomatsuri

Festival information website in Japanese and English (machine translated). Tickets for the auditorium in front of City Hall can be booked through the website.

In the days leading up to the festival, flyers with the festival schedule and other relevant information are available at all major stations of the Seibu Line.

From Ueno Station: Takasaki Line to Kumagaya, change to the Chichibu Railway in direction Mitsumineguchi to Chichibu or Ohanabatake Station

Please note that the Chichibu Railway does not accept PASMO / SUICA cards.

Onouchihyakkei Icicle Park in Ogano in the Chichibu region of Saitama Prefecture stages an annual illumination of its spectacular icicles.

The Funadama Festival is a river festival with boats decorated with colorful lanterns on the Arakawa River during Obon in Nagatoro in Saitama.