Ogose Plum Blossom Festival takes place in Ogose, Chichibu, Saitama, during the plum blossom period of early to mid-March. Known as ume no hana the closest big plum blossom festival is in Ogose. 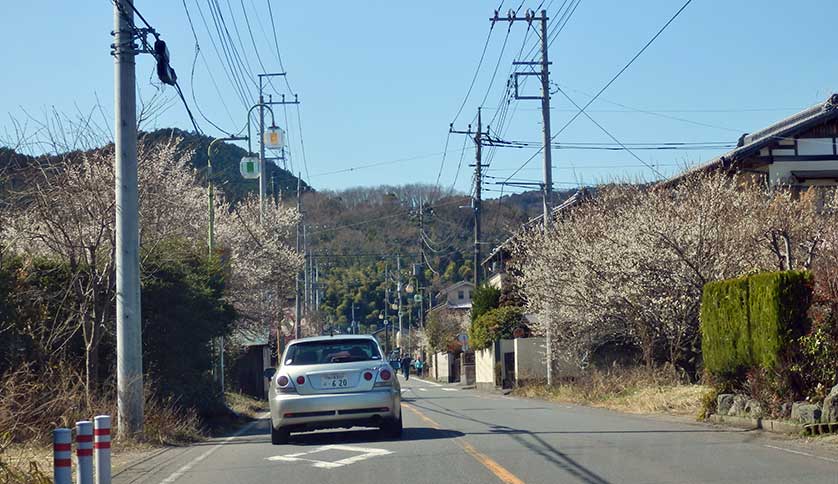 Ogose street on the way to Bairin Park. Traffic can be heavy on festival weekends

Before sakura, the famous cherry blossom season in about mid-spring, Japan celebrates the ume no hana season, starting in about mid-February and lasting until late March.

Ume no hana are the blossoms of the ume, the Japanese Plum (Prunus mume), a tree that is actually more closely related to apricot than to western style plums. The ume blossom season is considered a symbol of spring and many people celebrate the blossoms by visiting ume tree parks which offer, besides their scenery, special festivities.

The ume no hana festival closest to Tokyo is the Ume Matsuri in Ogose Town in the mountainous Chichibu Region of western Saitama Prefecture. It is easy to reach from Ikebukuro Station in Tokyo: take the Tobu Tojo Line to Sakado, change there to the Tobu Ogose Line, get off at Ogose Station. 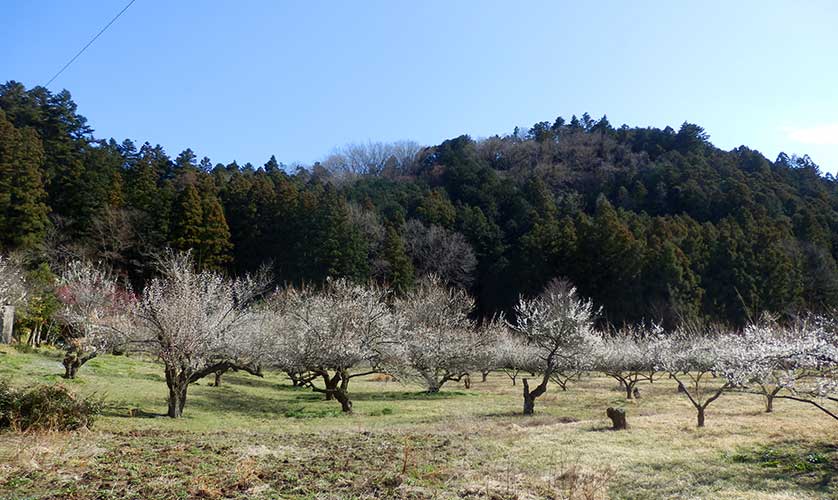 It is often said that the Kanto region in eastern Japan, the region around Tokyo, has three truly famous ume parks: Kairakuen Park in Mito (Ibaraki Prefecture), Baien Park in Atami (Shizuoka Prefecture) and Bairin Park in Ogose, Saitama Prefecture.

Ogose, a rural town of about 11,000 inhabitants, is dominated by ume trees. The numbers given by local sources differ, but the general estimate is that about 20,000 to 25,000 ume trees grow within the town limits.

When walking or driving through the town in late winter, early spring you see blooming ume orchards wherever you look. 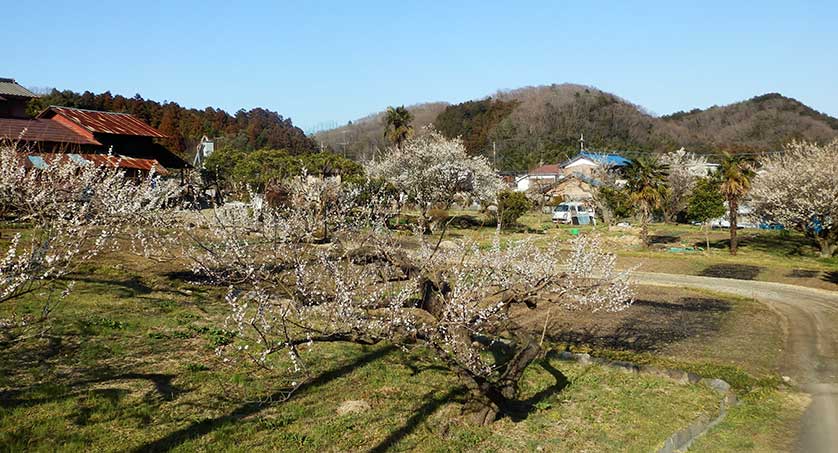 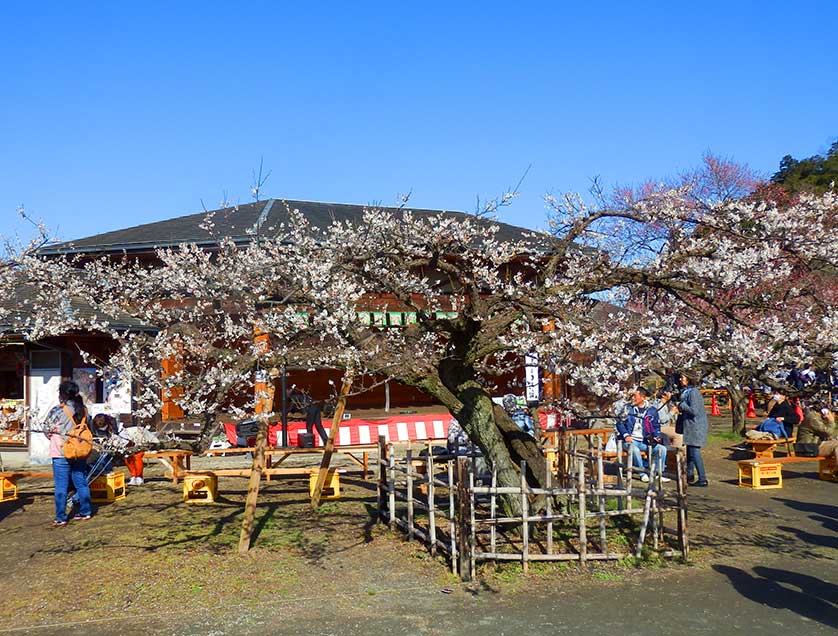 The trees were, of course, not originally planted to provide a pleasant seasonal sight for tourists but to provide for a living.

The fruits of the trees are pickled and sold as umeboshi, sour pickles that add flavor to the rice in bento boxes and onigiri rice balls. Umeboshi can also be eaten as sour snacks going well with a glass of sake or shochu.

Umeshu is a sort of shochu (a rather strong alcoholic drink) thoroughly flavored by the unripe ume fruits steeped in it. Unlike other ume products, umeshu tends to be sweet (though somewhat on the sour side).

Umeboshi are also frequently used in traditional medicine. Many Japanese make it a habit to eat at least one umeboshi per day - they are rich in all kinds of vitamins and thus considered putting a good shot of healthiness into one's diet.

The Shinpen Musashi Fudokiko, an Edo Era government issued book on the economy of Musashino Province (which covered today's Saitama Prefecture as well as western Tokyo), recorded a strong presence of umeboshi from Ogose on the markets of Edo, today's Tokyo, as early as the year 1747. 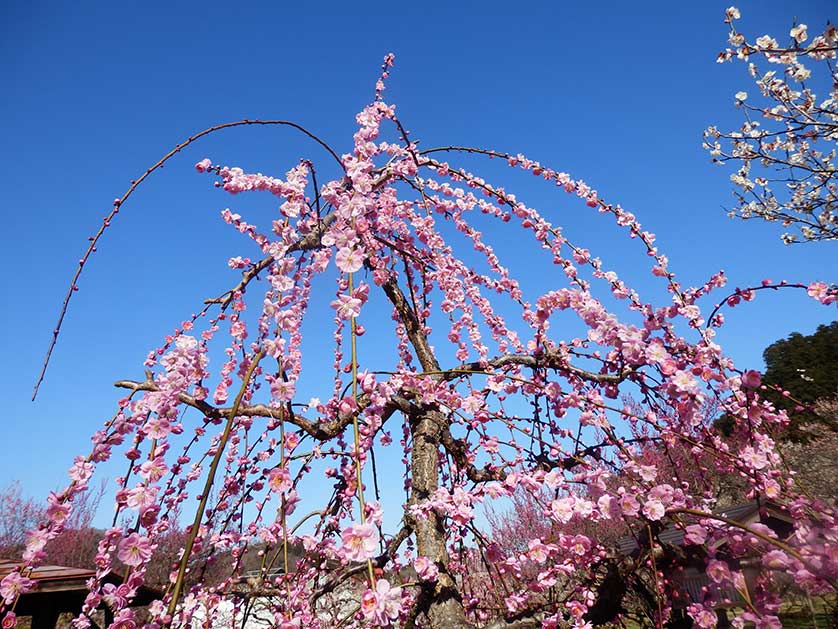 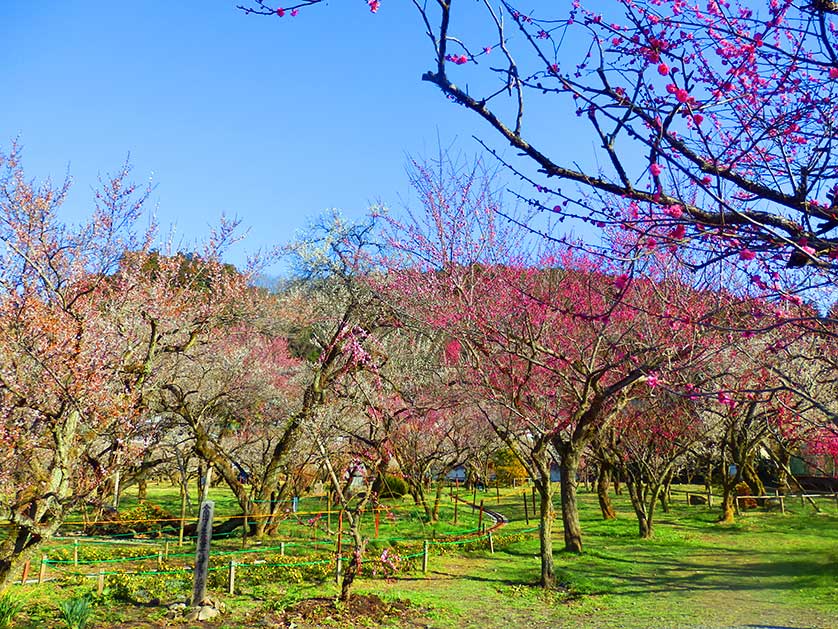 Local lore however claims a connection of the ume all the way back to Sugawara no Michizane (845-903), a famous Heian Period scholar, poet and politician who was banished from Kyoto and sent to live at Tenmangu Shrine in Dazaifu near Fukuoka, in Kyushu.

Sugawara had a great love for ume trees and wrote a famous poem about one of them, a tree that according to legend flew from Kyoto to Dazaifu to comfort Sugawara in his exile.

Umezono Shrine in Ogose, founded in the 1400's, is considered a branch of Dazaifu Tenmangu Shrine. When the founders of the Umezono Shrine arrived from Kyushu, they brought seedlings of Sugawara's legendary ume tree with them and thus introduced Japanese plums to the area. 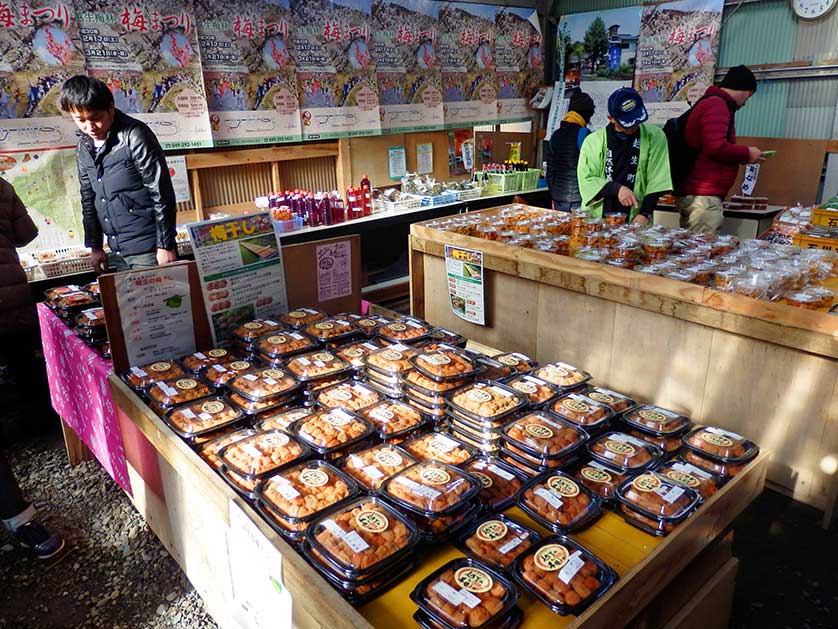 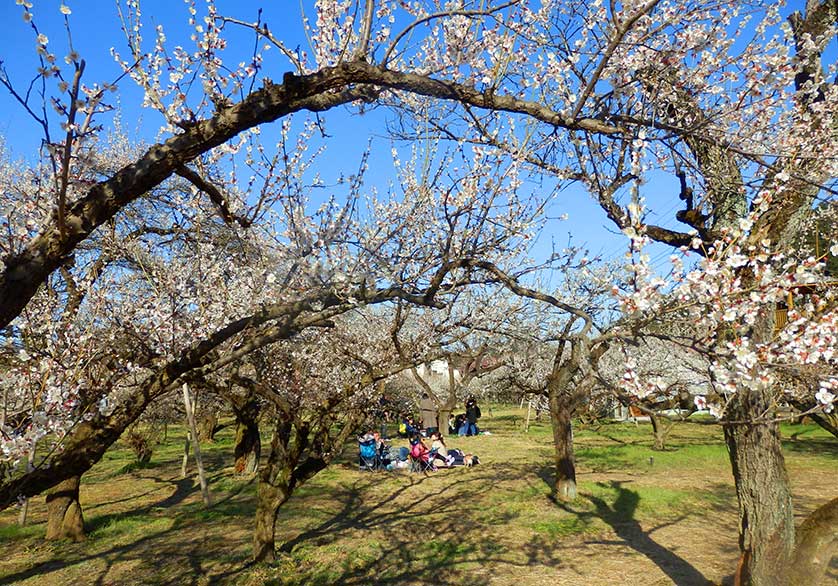 Ogose Bairin Park (Ogose Ume Tree Park), located on the northern bank of the Oppe River close to Umezono Shrine, is a two hectare area in the center of the traditional Ogose ume tree area. It encompasses about 1,000 plum trees. About 100 of the trees are at least 200 years old, the oldest dates back about 600 years.

All the trees are commercially used for umeboshi production.

Just take a stroll. Even on busy days, it's easy to get away from the crowds and to enjoy the blossoms undisturbed.

A miniature train called the Mini SL, pulled by an engine designed to look like a model steam locomotive, runs on tiny railroad tracks through a section of the park. It's very popular with children and their parents, as well as a family photo opportunity.

There is a stage with occasional performances, there are merchant stalls of all kinds, selling everything from local shitake mushrooms to traditional festival food like fried meat on a stick to chocolate-covered bananas.

A temporary market hall offers umeboshi and other local products. A leaflet at the market informs visitors that the umeboshi on sale are of the traditional kind - they are salty and sour. No compromise has been made to conform to the more recent fashion of sweeter umeboshi. An ancient plum tree grows right inside the market hall, its blooming branches reaching towards the cash register. Holes in the ceiling let it stretch out its upper branches towards the open sky.

Umeshu liquor is not sold at the market hall. You can buy it at a nearby drinking outlet though. It's sold in small jars with a real ume fruit inside, providing the perfect taste to enjoy under the blossoming trees.

Feel free to spread a blanket somewhere below the blooming trees nearby and enjoy the umeshu with your friends or family. Many locals enjoy the festival exactly like that - with a picnic and a few drinks right under the trees. 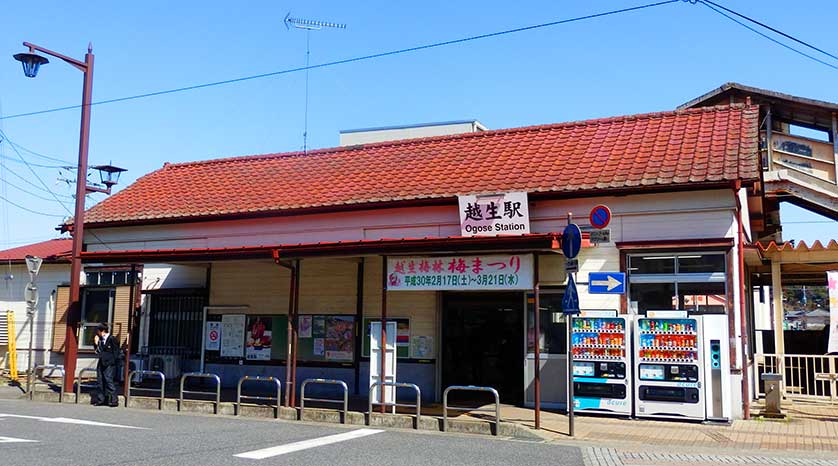 To get to Ogose, take the Tobu Tojo Line from Ikebukuro Station to Sakado Station and change there to the Tobu Ogose Line. The line terminates at Ogose Station.

If you are in western Tokyo, the JR Hachiko Line (running from Hachioji, Tokyo to Takasaki, Gunma Prefecture) might prove convenient. It also stops at Ogose Station.

At Ogose Station, flyers with a map indicating a scenic walk to Bairin Park are available (in Japanese). The walk is about 3.8 km, a bit less than an hour.

Bus: Take a bus heading for Kuroyama from Ogose Station, get off at the Bairin bus stop. During the festival and especially on weekends, special buses bound for Bairin Park are in operation. On weekdays, they run once per hour, on weekends and public holidays, twice per hour.

The Mini SL train (the miniature train) operates on Saturdays, Sundays and public holidays from 10 am to 3 pm. A ticket for one round is 200 yen. Children age 2 or younger can ride it for free.

Onouchihyakkei Icicle Park in Ogano in the Chichibu region of Saitama Prefecture stages an annual illumination of its spectacular icicles.

Chichibu Night Festival (秩父夜祭 Chichibu Yomatsuri) is one of the biggest festivals of the Kanto area.

The Funadama Festival is a river festival with boats decorated with colorful lanterns on the Arakawa River during Obon in Nagatoro in Saitama.