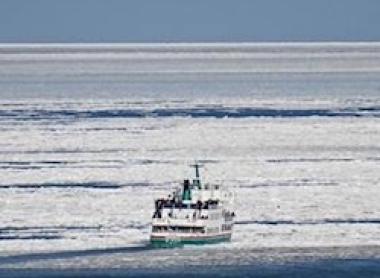 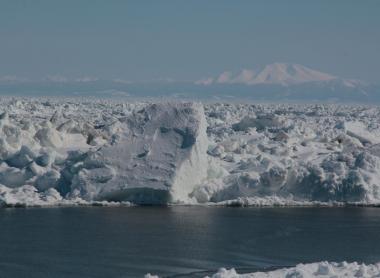 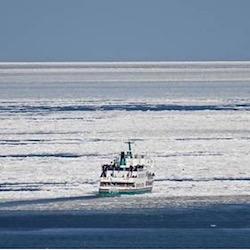 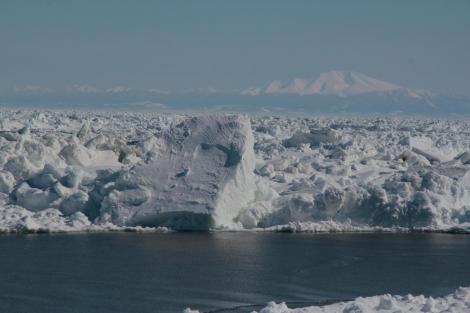 Abashiri is located on the coast of the Okhotsk Sea, 350 km from Sapporo, northeast of Hokkaido. The city is known for having the northern most prison in Japan as well as the drift ice that draws many tourists during the winter months.

Abashiri is a tiny city on the north-east coast of Hokkaido, about 6 hours by train from Hokkaido's big city, Sapporo. When looking at a map of Hokkaido, you will notice that the sea north of the island is called the Okhotsk Sea. Sound Russian? Sure it does. It is named after Okhotsk, on the Siberian side of the Okhotsk Sea, which has temperatures in the winter months comparable to those in the freezing Arctic. And the Siberian winter reaches out all the way down to the Hokkaido coast, too.

In late February, the winds and the currents bring the Siberian drift ice right down to the town of Abashiri, adding a decidedly Arctic feel to the already deeply snow-covered city.

But this side of the Okhotsk Sea (Ohotsuku-kai オホーツク海), is Japan and that means punctual trains, reliable service and let's not forget, very good fresh, local food.

Especially recommended is the seafood taken right out of the freezing ocean, such as giant king crabs and the incredibly tasty Hokkaido ikura (salmon roe).

Arriving at Abashiri Station is the perfect time to leave your luggage in a station coin locker and take the bus to the harbor right away. Two ice breakers go from here on hourly tours through the drift ice in Abashiri Bay, the Aurora and its sister ship, the Aurora II.

The Abashiri Bay boat tour will be the high point of your trip - provided there is drift ice. The ice generally arrives in February and may stay until early March. In some years, the ice freezes to solid pack ice. You can walk on it and the icebreakers will have to work hard to cut a path through it.

In some years, however, there is no drift ice at all. Aside from following the Japanese weather news which always reports the arrival of the ice and getting there at the right time, there is nothing you can do but simply hope for the best of luck.

Buy a ticket and get on the boat. The best place is up on the open deck. The ship leaves the harbor and trawls towards the Shiretoko Peninsula, the long peninsula marking the north-eastern edge of Hokkaido and a UNESCO World Heritage site.

It's a breathtaking view: the sea covered with ice floes all the way to the snow-capped mountains of the peninsula. Everything appears in different hues of white and blue: the ship, the floes, the mountains and the sky. Seagulls travel with the boat, birds rest on the floes, and if you are very lucky, you can glimpse some seals relaxing on the ice.

What you can't see are the clione, the sea angels, who came with the ice and live right below it. Clione are tiny transparent creatures that look like little angels swimming upright in the cold salt water and flipping their fins like angels would flap their wings.

After an hour in the fresh breeze out in the bay, the boat returns to the harbor. Here you can see the clione in a small aquarium. They look so cute - diving tours under the ice are not on offer.

On a more somber note, Abashiri has a firm place in Japan's political history, having been the site of Abashiri Prison, where political prisoners were interred during the Meiji Period. There is still a maximum security prison here, but the old prison is commemorated by the Abashiri Prison Museum.

If you want to see more of the drift ice take the morning train to Shiretoko Shari, the gateway town to the Shiretoko Peninsula. The train travels all the way there right along the coast. If there is drift ice, the scenery is spectacular.

Kitahama, a stop on route, is an especially small, old station built entirely from wood and located directly at the shore. Special tourist trains operating during the drift ice season stop there to give the visitors time to explore Kitahama station and to look at the sea from the attached viewing platform. Regular local trains stop here as well, of course.

You could also use that train to continue your journey. Either take the local train all the way to Kushiro or get off in Shibecha and change there to the steam locomotive also heading for Kushiro.

JR Hokkaido operates a winter-only steam train service called SL Fuyu-no-Shitsugen that runs from Shibecha to Kushiro for the nostalgia crowd. The train operates only in winter and just once a day, the Shibecha departure time being about 2 pm.

With much huffing and puffing the train pulls out of the station. The landscape outside is all mountains and forests from now on and there is plenty of wildlife to spot - lots of ezo shika (Hokkaido red deer) and if you are lucky, the occasional Hokkaido crane.

Kushiro is a seaside town and is also famous for its seafood, which is certainly worth trying if you aim to linger. If not, you can take the bus straight to the airport and catch the last flight of the day to Tokyo Haneda.

Sapporo to Abashiri on the "Wind of Okhotsk" train

Asahikawa is on the rail line from Sapporo to Abashiri. From late January through early March, however, you can travel on the Okhotsk no kaze (Wind of Okhotsk) special express, which leaves at 10am every morning. The Othotsk no Kaze is a more luxurious seasonal version of the regular Limited Express Okhotsk, which runs throughout the year.

Great food is served on this train, though it can't possibly beat the ekiben from Asahikawa.

Try to get a seat right behind the driver and look out of the big front window while the train travels through the snowy landscape. Four hours later, the train rolls into Abashiri Station.

The Wind of Okhotsk and the Limited Express Okhotsk are covered by the Japan Rail Pass.

In recent years, the blue pond of Biei, Aoi-ike, has become a must-visit sight on Hokkaido Island in northern Japan. But why is the pond so blue?

Where to see cherry blossoms in Hokkaido?

The northern island of Hokkaido is the last of Japan's regions to enjoy sakura blooms during spring. The latter intervenes there between the end of April and mid-May.

Mount Fuji is unique. But across the archipelago, you can find countless picturesque mountains...