Saigo Takamori: read a biography of Saigo Takamori (1828-1877), one of the great tragic heroes of Japanese history.

Saigo Takamori (1828-1877), aka Saigo Kichinosuke, is one of the great tragic heroes of Japanese history, a man whose memory is still held in great affection by many Japanese people for his virtues of courage, loyalty and self-sacrifice.

Born in Satsuma domain, now present-day Kagoshima Prefecture, Saigo is as honoured in his home town of Kagoshima, as that other great Bakumatsu Period hero, Sakamoto Ryoma, is in his native Kochi.

Saigo played a huge role in the overthrow of the Tokugawa regime in the 1860's culminating in the Tokugawa's military defeat at the Battle of Fushimi Toba outside Kyoto in 1868. Saigo was one of the leading generals of the royalist forces during this defining battle and the succeeding Boshin War, which finally defeated all shogunate forces and lead to the restoration of the Emperor as the font of political power in Japan, rather than the shogun. 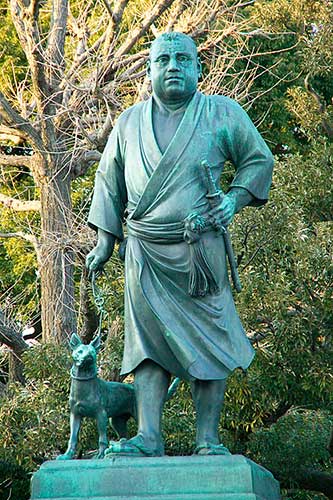 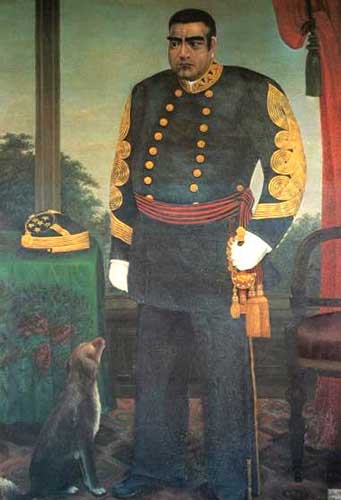 Saigo, like Ryoma grew up in lowly samurai circumstances, and his large family (Saigo had six siblings) were as much farmers as warriors.

However, Saigo's talent is believed to have been spotted at an early age by the feudal lord of Kagoshima, Shimazu Nariakira, who was influential in trying to seek reconciliation (known as kobu gattai) between the Imperial Court in Kyoto and the shogunate in Edo (modern-day Tokyo).

Divisions between the two had erupted following the arrival of Commodore Perry and his "Black Ships" off the coast of Shimoda and the Americans' demands that Japan open up to foreign trade and relations. The regime was forced to negotiate with the foreigners, while the court demanded their simple expulsion in a policy known as sonno-joi ("revere the Emperor; expel the barbarians).

Saigo, a tall, powerful man, was initially appointed as Nariakira's gardener at his Edo estate when the daimyo (feudal lord) journeyed to Edo to plead for a compromise position between the two parties. Saigo is believed to have impressed his lord and the two became friends. 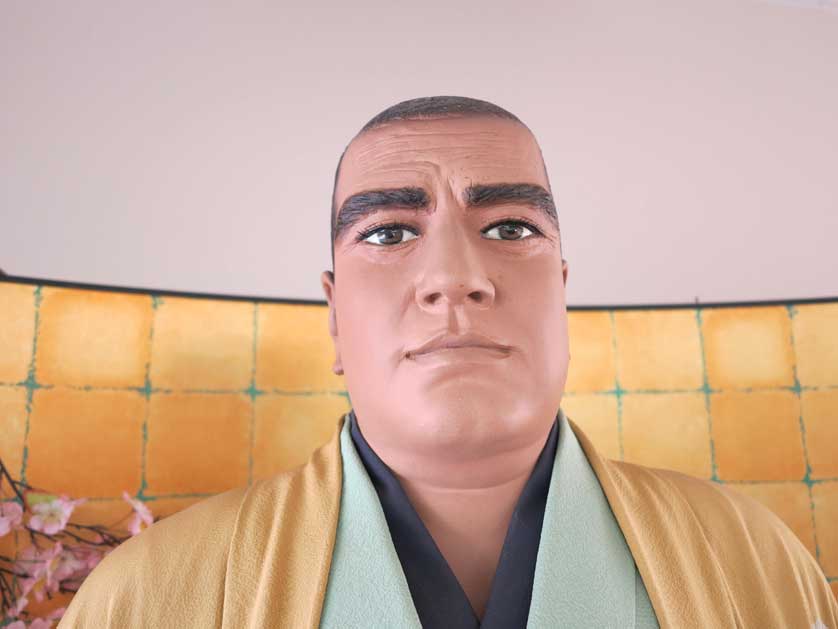 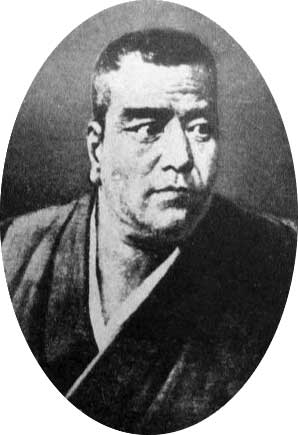 However, the so-called Anshin Purge (1858-1860), a crack down on anti-Tokugawa dissidents, initiated by the Tokugawa official Ii Naosuke (1815-1860) and the death of his patron Nariakira, meant that Saigo was arrested and exiled to the remote island of Amami Oshima, briefly recalled in 1861, then exiled again to the even more far-flung island of Okinoerabu.

There is some historical speculation that Nariakira was poisoned with arsenic on the orders of his father, Narioki, who had been forced to retire as daimyo of Satsuma and relocate to Edo by the shogunate in 1850. The supposed differences between father and son related to the Ryukyu Islands (Okinawa - which was administered by Satsuma), where Nariakira was in favor of granting trading rights to the British and other western powers.

Saigo was eventually pardoned in 1864 and sent by the new daimyo, Shimazu Hisamitsu (Nariakira's younger half-brother), to Kyoto to look after the relations of the Satsuma domain with the Imperial court and command a detachment of Satsuma troops stationed in the ancient capital. Saigo's relations with Hisamitsu were strained as many believed he had been complicit in Nariakira's death).

Defeat of the Tokugawa

In Kyoto, Saigo at first concluded an alliance with forces of Aizu domain (present-day Fukushima Prefecture) to successfully fight off a take over of the Imperial Palace (Gosho) in 1864 by forces from Choshu, a domain centered on the town of Hagi and what is now Yamaguchi Prefecture. This was known as the Kinmon Incident.

Later Saigo was to ally with the forces of Choshu in what is known as the Satcho Alliance, brokered by the mediation of Sakamoto Ryoma. Saigo helped Choshu to purchase arms from the British merchant Thomas Glover in Nagasaki.

Ironically, the Satsuma domain and the British had grown closer after a brief war between the two, when the British navy had bombarded Kagoshima in 1863, following the murder of a visiting British businessman, Charles Richardson, in Namamugi near Yokohama. Leaders from both Satsuma and Choshu were to dominate the early Meiji government and oversee the modernization and westernization of Japan during this time.

The last shogun Tokugawa Yoshinobu finally stepped aside in 1867, thus paving the way for the restoration of power in the name of the Emperor. The brief Boshin War saw the complete collapse of the old regime at the hands of loyalist forces led by Saigo. Edo Castle was surrendered by the Tokugawa official Katsu Kaishu to Saigo in April 1868, effectively ending over 200 years of Tokugawa hegemony.

Saigo did join the new Meiji government but his social conservatism saw him oppose much early westernization, such as the building of railways in favor of strengthening the military, and he was also a fierce advocate of declaring war on Korea in 1873, which other oligarchs opposed. Saigo even offered to go to Korea himself, so that any violent action against himself might be a casus belli for war against Japan's nearest neighbor.

Saigo (along with other ministers such as Itagaki Taisuke) left the government in protest against a lack of action over Korea and returned to Kagoshima. Here he set up various "academies" where underemployed samurai, who had lost their status, privileges and subsidies under the new order, could meet and train. 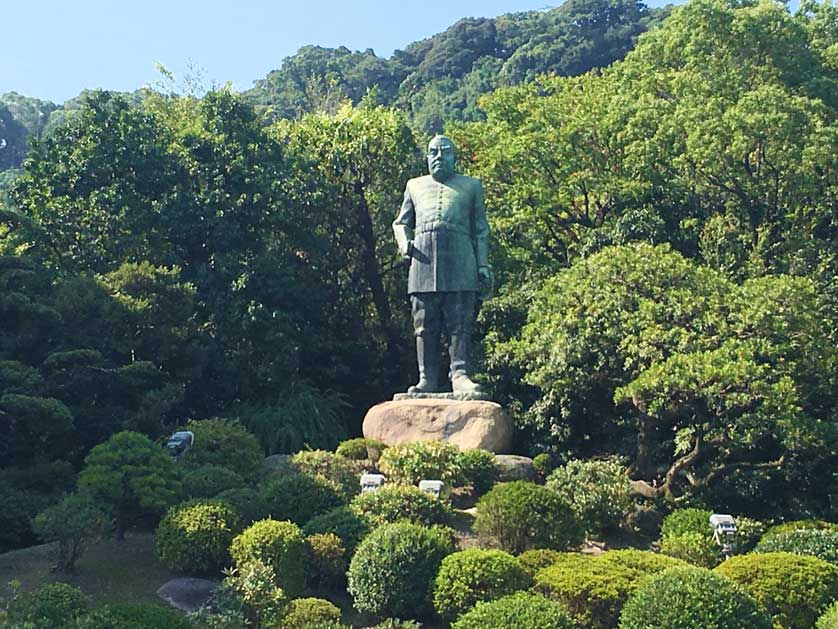 Four years later he was to find himself in reluctant armed opposition to the Meiji rulers as head of an army of disaffected and disillusioned samurai in the Satsuma Rebellion of 1877.

As tensions rose between the Meiji government and dissenters in the former Satsuma domain based in Saigo's academies, the possibility of conflict between the two parties increased. Saigo determined to march on Tokyo to seek answers from the government at the head of his rag-tag army of former samurai. The first shots of the insurrection were fired at Kumamoto Castle, which Saigo's forces were unable to storm. 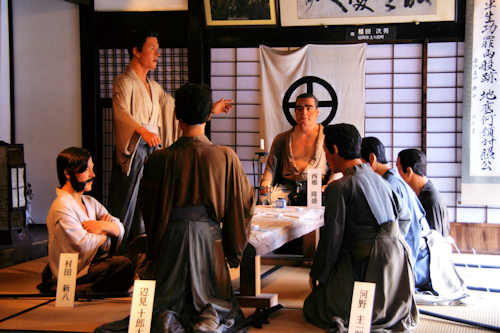 The imperial conscript forces were commanded by Yamagata Aritomo and greatly outnumbered Saigo's men. The rebellion was gradually crushed with the decisive Battle of Wadagoe, near Nobeoka in Miyazaki the end of the war in military terms. The Saigo Takamori Headquarters Museum here commemorates Saigo's meeting with his generals as they face defeat and his daring escape over the slopes of Mount Enodake. Saigo was then to make his last stand on Shiroyama overlooking the city of Kagoshima.

Badly wounded in the hip, Saigo is thought to have committed seppuku and was then beheaded by his follower, Beppu Shinsuke, though the exact nature of his death is not completely clear.

The heroic actions of Saigo and his men are loosely documented in the 2003 movie The Last Samurai, starring Tom Cruise and Ken Watanabe. 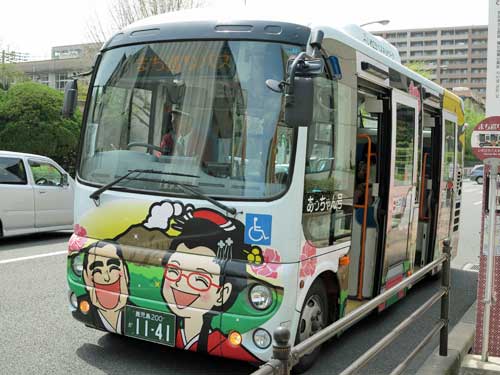