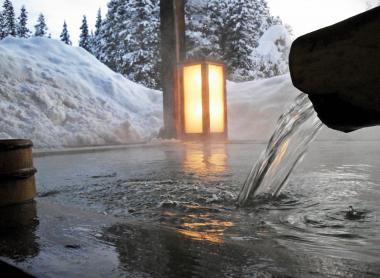 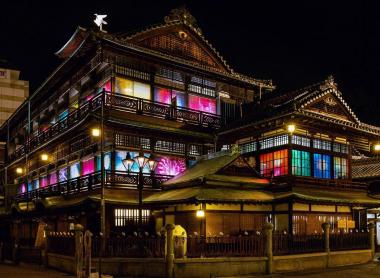 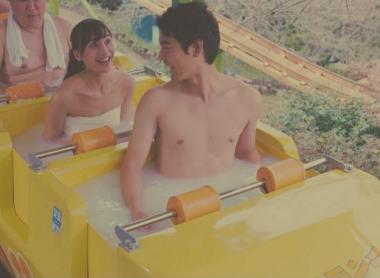 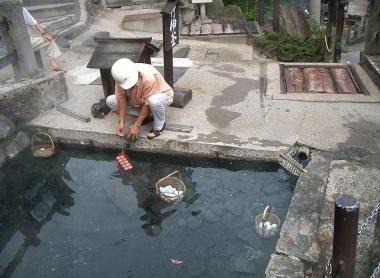 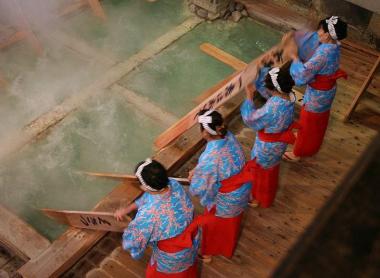 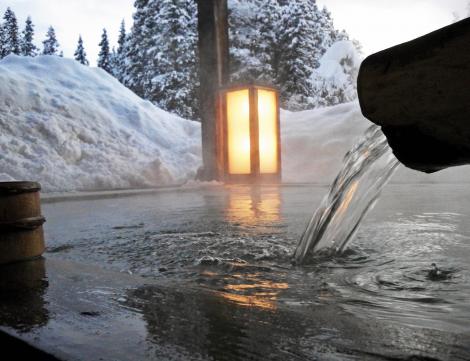 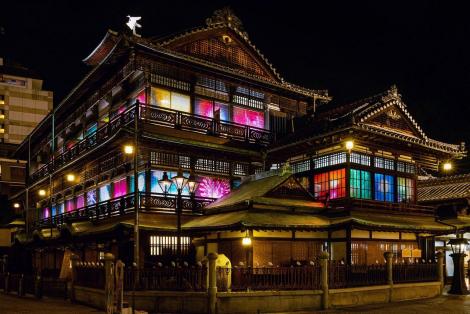 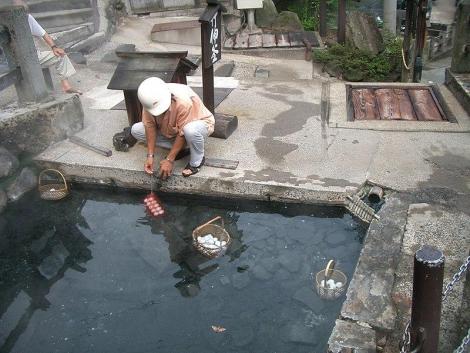 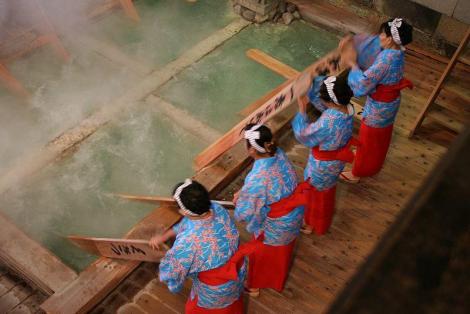 Ieyasu Tokugawa (1543-1616), the first shogun of the Edo period (1603-1868), was extremely passionate about hot springs and is responsible for the start of a very curious custom called okumiyu, or transporting hot spring water.

The shogun owed his love of baths to a stay in the spa town of Atami. For seven days, he benefited from the therapeutic benefits and relaxing virtues of the hot onsen waters of the city. Later, when informed of the ill health of one of his daimyo, Hiroie Kikkawa (1561-1625), he had barrels of hot water sent to Kyoto from Atami, to cure the pain the daimyo suffered. This transporting of water was the first instance of okumiyu.

From 1644, the practice became official. The fourth shogun Tokugawa Ietsuna (1641-1680), regularly had water from several onsen around the country brought to his castle in Edo (the old name for Tokyo). Every year the government sent a

magistrate in charge of okumiyu to an onsen town chosen for the quality of its waters. The magistrate was then in charge of sending several barrels of the water to the shogun each day.

And so it was: groups of men, carrying barrels, running along Japan's roads. And they were fast - very fast, even. So much so that the 100km journey between Atami and Edo only took 15 hours! To achieve this feat, groups of men took turns running from city to city, ensuring that the barrels never touched the ground. And the water, drawn at 90°c in Atami, was still at 40°c when it arrived in Edo!

Okumiyu continued until 1805, even if in the last few decades road transportation was replaced by sea. The custom, similar to a hot spring water home delivery service, carried thousands of barrels from Onami, Hakone and Kusatsu Onsen water to Edo!

Faced with the behemoths of the Setouchi, Yokohama, Aichi and Echigo Tsumari Triennals, the brand new Matsuyama Contemporary Art Festival in Ehime Prefecture, called Dogo Onsenart, is just a baby.

It was founded in 2014 to commemorate the 120th anniversary of the renovation of the most famous building of the onsen town, Dogo Onsen Honkan. Built in 1894, it is one of Japan's oldest onsen. Dogo Onsenart has the distinction of being the longest contemporary art festival in Japan.

The most recent festival began in September 2017 and won't end until the end of February 2019; that's 18 months later! Twenty artists including photographers, multimedia artists, graphic designers and painters took part in this edition. The installations and various works of art then took over the streets of Matsuyama and even Dogo Onsen itself. The festival perfectly combines contemporary creations with the tourist resources of the spa town. Hopefully this festival will be as successful as those held in other Japanese cities!

What was Yasuhiro Nagano, the mayor of Beppu, thinking when he put a video online in November 2016 promoting the creation of the first theme park in the world dedicated to onsen? A mad idea to some, an extraordinary advertising opportunity for others, opinions differ. The mayor promised to actually create the park if the promotional video exceeded 1 million views. This figure was reached in just 3 days!

In the ad, which quickly turned viral, we can see visitors speed down the slopes of a rollercoaster, sat in a carriage filled with hot spring water. But it doesn't stop there. In this future park, families and friends, all with a towel around their waist, profits from the benefits of the waters of the onsen of Beppu, since the water is everywhere; in the cabins of a Ferris wheel, the wagons of a funicular, between the horses of a carousel and more. To fulfill its promise, the city of Beppu set up a crowdfunding campaign that that has raised 82 million yen!

But there's still a major problem: making it a reality. The amusement park Beppu Rakutenchi was the site chosen to be refurbished and converted into the onsen theme park, but unfortunately for safety reasons many of the attractions seen in the video won't actually see the light of day. So sadly the rollercoaster and watercars were nowhere to be seen at the opening of the park on July 29, 2017.

The ephemeral park in the video was full of visitors during its 3 days of operation. And only those who contributed at least 8,000 yen to the crowdfunding campaign will have access to Beppu's Yu-enchi. But  you can bet that Yasuhiro Nagano will soon have another genius idea to promote the hot springs of Beppu!

When visiting the spa town of Kusatsu in Gunma prefecture, you absolutely must attend a yu-momi ceremony. Typical of Kusatsu, yu-momi is a secular method of cooling thermal water. Kusatsu onsen water is known for its very high temperature when it leaves the spring. It's therefore necessary to cool it down a bit before allowing visitors to enjoy and relax in complete safety.

To do this, the method adopted in Kusatsu is very special. Young women, dressed in traditional dress, sit around the steaming pool and mix the water with wooden boards 1.8m long and 30cm wide. This is done to the rhythm of folk songs, allowing perfect synchronization of the movements.

Although today it's a form of entertainment offered to tourists, this ancient custom actually has real benefits. The waters of Kusatsu are very acidic, have been known for centuries for their bactericidal action and effectiveness against leprosy. An early legend is that a child was said to have told the first shogun of the Kamakura clan, Minamoto Yoritomo (1147-1199), how the hot waters of Kusatsu could cure him of leprosy.

And the technique of yu-momi optimises the water's effectiveness against skin diseases. How? Well, with yu-momi the temperature of the water is lowered without the addition of cold water. While adding some would certainly save time, it would greatly reduce the acidity, and therefore the effectiveness, of Kusatsu's water!

The restaurants and cafes of onsen towns frequently offer menus full of intriguing local specialties, many of them steamed or cooked using the water of the hot springs of the city.

Among these, let's focus on onsen tamago or onsen eggs. According to the traditional method, the eggs, placed in baskets or nets, are immersed in water at 70°c for 30-40 minutes. Cracked open, the egg is then served in a small cup with dashi or soy sauce. This cooking method results in a unique texture - the white of the egg is cooked but runny, while the yolk is firm.

If you prefer a sweet treat, indulge in an onsen manju, also called yunohana manju. These buns filled with anko are steamed over the onsen waters. They were created by Katsuzo Handa in 1910 in the spa town of Ikaho, located on the eastern slopes of Mount Haruna in Gunma Prefecture, as he was was looking for a local specialty to offer to customers of his establishment. He then had the idea to make a manju with brown sugar, with a cooking method that would take advantage of the reddish-brown thermal waters, loaded with Ikaho iron.

And it was Emperor Hirohito himself who contributed to the reputation of the onsen manju, when, passing through Ikaho in 1934, he bought a large quantity of them. Unlike ordinary manju, an onsen manju has a brown appearance and softer, thinner skin.

While, let's face it, the amount of hot spring water useful for the making of these different dishes is minimal, these onsen specialties are nonetheless extremely tasty!