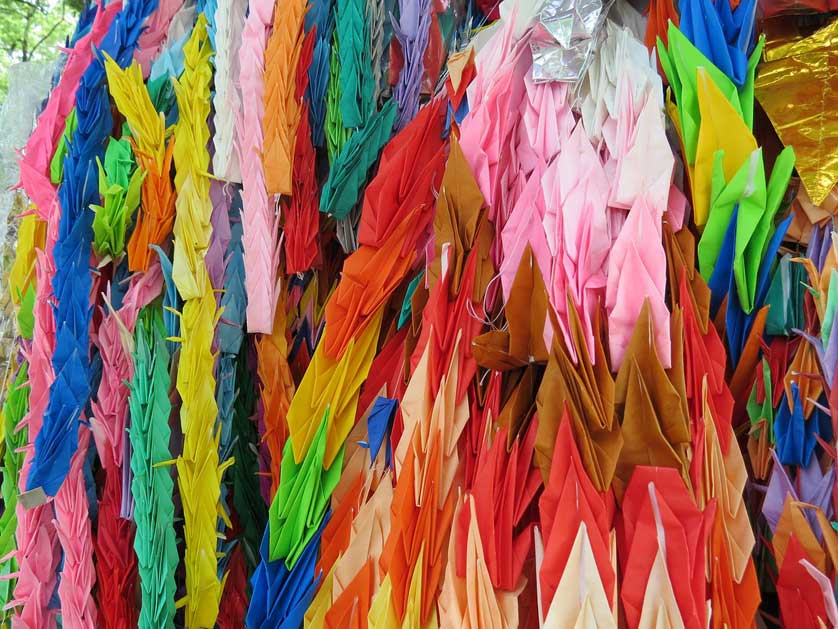 The Red-crowned Crane is an iconic bird in Japan found in symbolic form in many contexts, from sake bottles to airline liveries, but perhaps most poetically on a bride's wedding kimono.

The Red-crowned Crane is called Tancho in Japanese, however the general term for cranes (all species) is Tsuru.

Japan is blessed with one breeding species of crane, four more species regularly wintering here, and two rarities that put in very occasional appearances. Whichever the species, tsuru are a joy to watch and to listen to; the members of each pair dance and duet together exhibiting their graceful elegance. Their long-term pair bonds make them ideal symbols of loyalty and permanence, while their powerful flight makes them symbolic of strength. 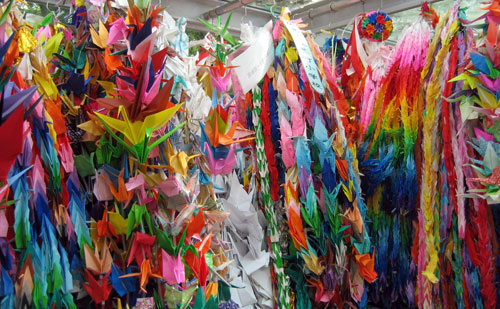 Leis of 1,000 folded cranes are donated daily at the monument at Hiroshima, Japan.

The mythological tsuru is a fortunate creature indeed, not only is it revered as the bird of happiness, but it is also considered to live for a thousand years. Classical artistic renditions often pair the crane with the pine tree, even depicting the bird perching in the pine's branches.

Although no self-respecting Japanese crane would ever perch in such a place, the juxtaposition is meaningful, for both pine and crane are symbols of endurance and long life. For twenty years from 1984-2004, a pair of Red-crowned Cranes, based on a photograph taken by Hayashida Tsuneo, graced the reverse of the series D ¥1,000 note.

Unfortunately, extensive counterfeiting led to the series being withdrawn and the crane was lost from the replacement note. A yet more potent symbol of agelessness is the combination of crane and turtle, with the turtle deemed to live for ten thousand years, and this famous combination can be seen in bronze at the Toshogu Shrine in Nikko.

Although many may aspire to seeing a crane in the wild, few achieve that good fortune because as breeding and resident birds, Red-crowned Cranes only frequent the marshes of eastern Hokkaido, and as winter visitors White-naped and Hooded cranes, and the occasional less common species, only occur in southwest Kyushu.

Once common throughout Japan, the ranges of the cranes have contracted here as their habitat has been overwhelmed by development, nevertheless the tsuru symbol remains readily recognised and well known to all throughout Japan.

Senbazuru literally means 1,000 cranes and refers not to the wild creature, but to its delicate replication in paper, in origami.

The challenge of completing a lei of one thousand folded paper cranes is a great one, but said to be rewarded with a wish. In particular, folding a thousand paper cranes on behalf of a sick person indicates the maker's concern and care for the sick person.

A lei of a thousand cranes strung on a thread is a colourful thing and is traditionally presented to the sick person so that they may hang them in their room, or given as a wedding gift by a father to his daughter, wishing the newlywed couple a thousand years of happiness. 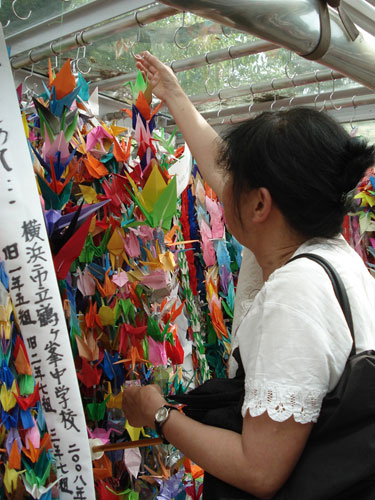 Praying for peace by folding, then donating, a 1,000 paper cranes, Hiroshima, Japan. 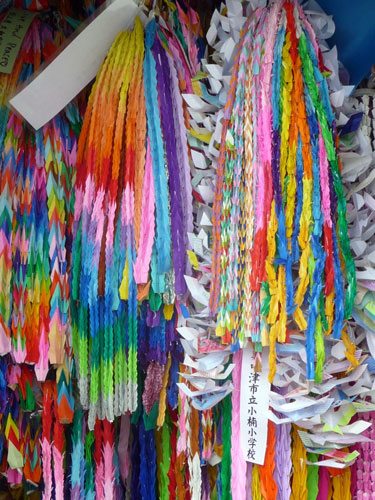 Folding a thousand origami cranes was more widely popularized in the poignant story of Sasaki Sadako.

Told in various forms this tale relates how two-year-old Sadako-san was exposed to dangerous levels of radiation during the bombing of Hiroshima in 1945. She survived initially, but only to contract leukaemia a few years later.

She was inspired by the legend of the senbazuru and so began folding cranes, presumably in the hope of being granted the wish of health on completion of one thousand. Sadako-san, sadly, did not succeed in her wish, however her inspiration leads many each year to fold colourful paper cranes and donate them in leis at shrines across Japan, but most frequently at the Peace Memorial in Hiroshima. 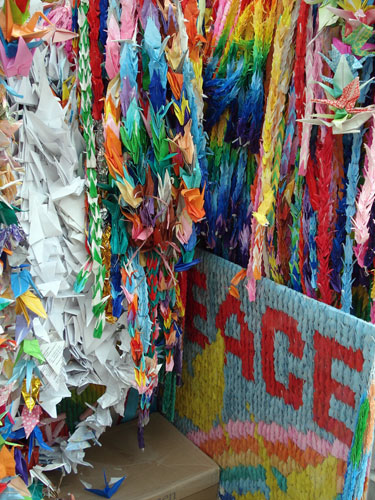 Emulating Sasaki Sadako visitors from around the world fold their cranes and add them to the memorial at Hiroshima, Japan. 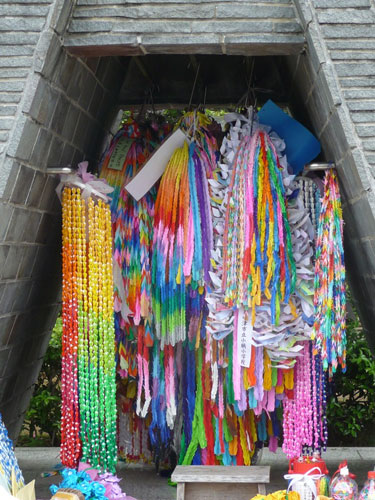 A poignant offering of Senbazuru at the Nagasaki memorial

Origami paper comes in various sizes, however for long strings of cranes smaller sheets (75 mm by 75 mm) are popular as they make for lighter leis.

Most skillful of all is to create renzuru - this involves the folding of a single sheet of paper into multiple cranes that remain connected by the tips of their wings or beaks.

Strategic cuts must be made to the paper first, but then as if working in miniature were not enough of a challenge, completion of the renzuru must be made without breaking any of the tiny connections holding the whole sheet together.

Whether folding a chain of a thousand cranes or producing renzuru with only several cranes connected, great manual dexterity, patience and perseverance must be achieved, and perhaps they are as much a reward as the wish at the end of the challenge.

Senbazuru, (Thousand Cranes) is also the title of an enigmatic 1952 novel by Japanese author Kawabata Yasunari. Set in the Second World War it is about the universal experiences of love and grief. 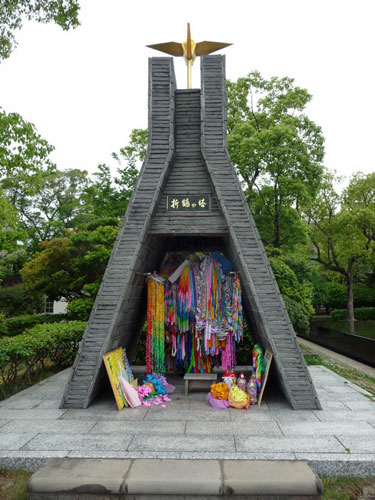 The Nagasaki memorial is topped with a statue of a golden, folded crane 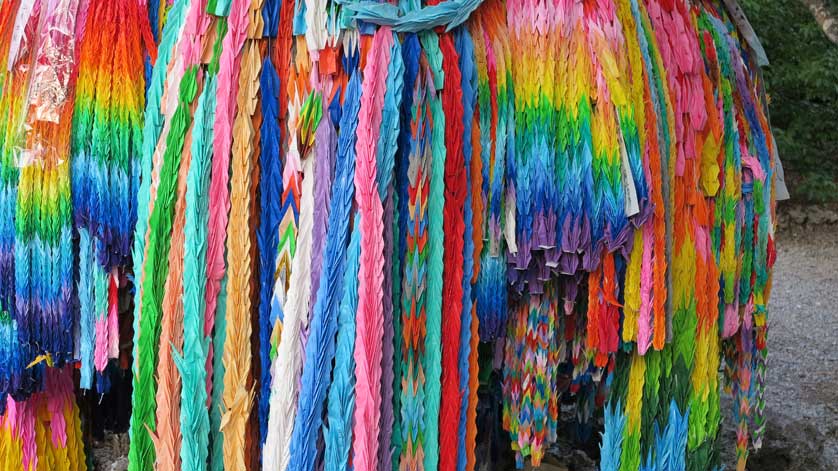 Senbazuru: Senbazuru are one thousand origami folded paper cranes made to make a wish or for hope for a sick person to get well.