The Night Train to Izumo サンライズ出雲

It's 10.20 at night and I'm on my back, in underpants and a tee shirt, watching commuters wait in line at Yokohama Station. Ordinarily, that should draw looks of horror, possibly the attention of the police, but not tonight.

Between me and the breath clouds dissipating above the platform, the station is briefly framed by the rectangular window of my sleeper compartment, before the Sunrise continues into the night. 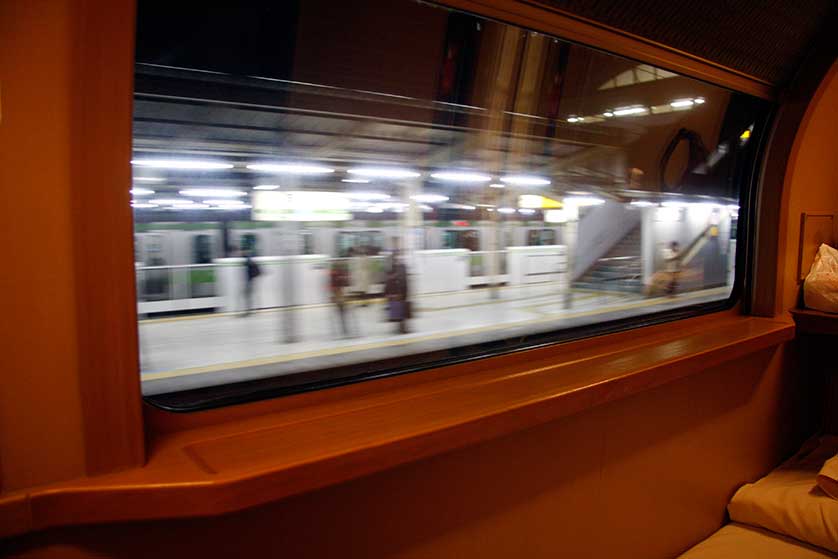 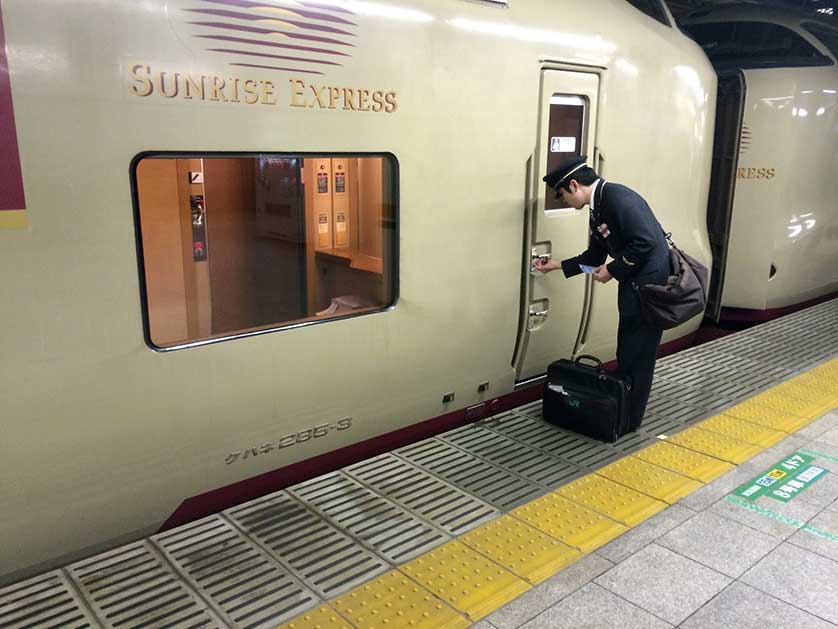 The Decline of Japan's Night Trains

In their heyday, sleepers crisscrossed Japan, offering a mix of functional transportation and luxury travel. Not now. The Osaka to Sapporo Twilight Express made its final run in March 2014. The Akebono service between Tokyo and Aomori in the far north of Japan's main island was retired in March 2015. The Cassiopeia, a favorite with train-spotters which ran between Tokyo and Sapporo, followed suit a year later.

Since the first sleeper took to the rails in 1958, more than 40 services have come and gone. An ever-expanding, highly efficient and high-speed bullet train network has played a part in that demise, as too has the rise of cheap and efficient inter-city night buses, plus the development of regional airports and with them increasingly affordable domestic air services.

Yet something about the death of the sleeper doesn't fit with Japan's affection for its trains. Take to YouTube and look for Cassiopeia's final run and you'll see what I mean. People packed the platform at Ueno Station in Tokyo to say their farewells.

Some were holding up handwritten signs saying, "Arigatou" (thank you). One young girl was filmed by national TV handing a bunch of flowers to a driver, her parents videoing it all as the driver bowed and received the bouquet with a smile. A few people were close to tears. Love-in met rush-hour scrum. And when it was all done - a handful of new, yet exorbitantly priced multi-night luxury trains aside - there was just one regular sleeper left in Japan. The Sunrise. 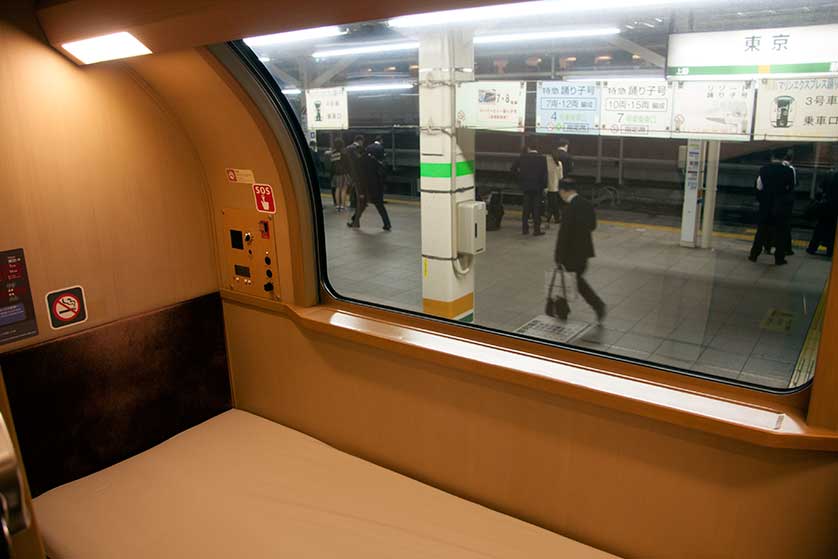 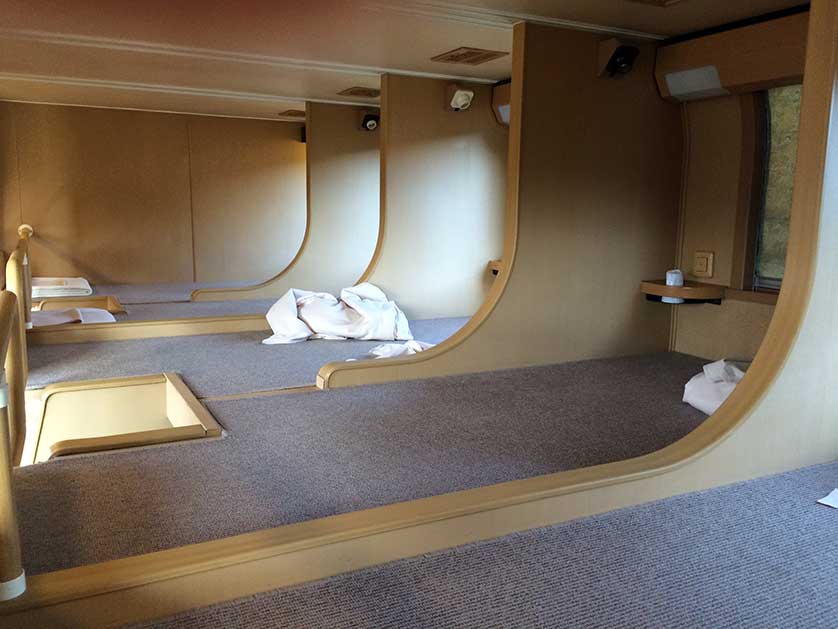 The Sunrise to Izumo or Takamatsu

Every night at 10 pm, the Sunrise pulls out of an unusually quiet corner of Tokyo Station and heads 650 kilometers west to Okayama in the Kansai region, where at about 6.30 am it splits in two, the Sunrise Izumo half going 200 kilometers northwest to Izumo in Shimane Prefecture and the Sunrise Seto half working its way 80 kilometers south to Takamatsu on Shikoku, the smallest of Japan's four main islands.

On this trip, I'm going to Izumo to see one of Shinto's most important annual rituals, the Kami-mukae-shinji (more on that later). I'm in the cheapest of the private berths, the Solo (basic Tokyo to Izumo fare of $109, plus $88), with a bed just long enough to lie straight and flat, but not quite wide enough for curling up in the fetal position. I can sit up, but there's no standing. There's no floor, just several narrow steps leading from doorway to bed; for that, you'd need the more spacious Single (basic plus $115) or Single Deluxe (basic plus $154), the latter of which also comes with a sink and desk. 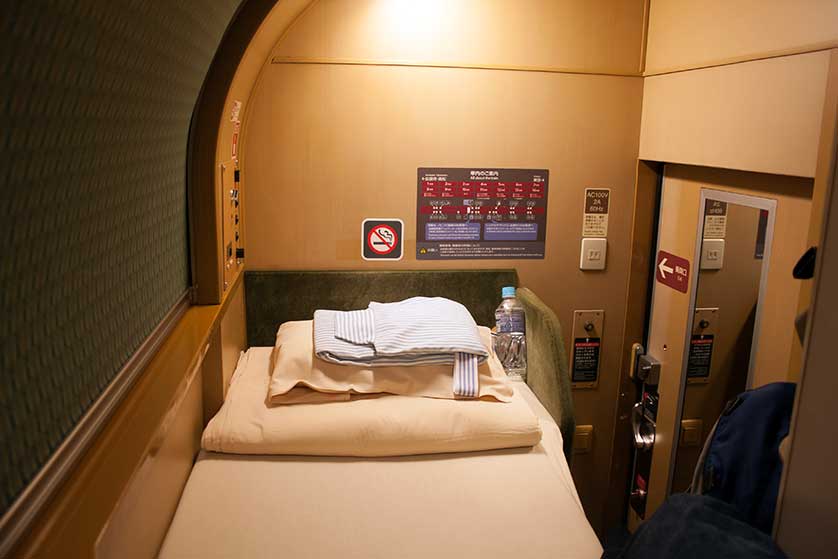 The Solo, however, is comfortable enough. I've got a little ledge to keep a single-serve "One-Cup" sake on, even though the movement of the train frequently threatens to spill it onto my thin blanket. I've got a panel with an alarm clock and radio, and a set of pajamas that would undoubtedly split (for all the worst reasons) if I tried to squeeze into them. I have ever-changing scenery, too.

From Tokyo to Yokohama, the train slowly passes by skyscrapers and classic neon-lit views of the capital by night. Then the city begins to recede. At Yokohama and latterly the seaside resort of Atami, where the train makes brief stops, you see people on distant platforms rushing for the last few trains of the night. By midnight, the increasingly small stations whizzing by are no more than a series of deserted platforms. The built-up, illuminated Tokyo backdrop has been entirely replaced by darkened countryside.

You don't notice the train's rocking and bumping - not unduly - but when it comes time to sleep each sway and surge becomes more pronounced. Like a sadistic nanny, the Sunrise likes to gently rock you to sleep, then jolt you awake, the cabin's digital clock marking each disturbance in the darkness. 1.30. 2.20. 3.10. The mini wake-ups come with unerring frequency, until Himeji, the first stop of the day, just before 5.30. An hour later, an announcement is piped through the train - a reminder that the Seto and Izumo sections of the Sunrise are about to part ways at Okayama Station - and the train comes to life. 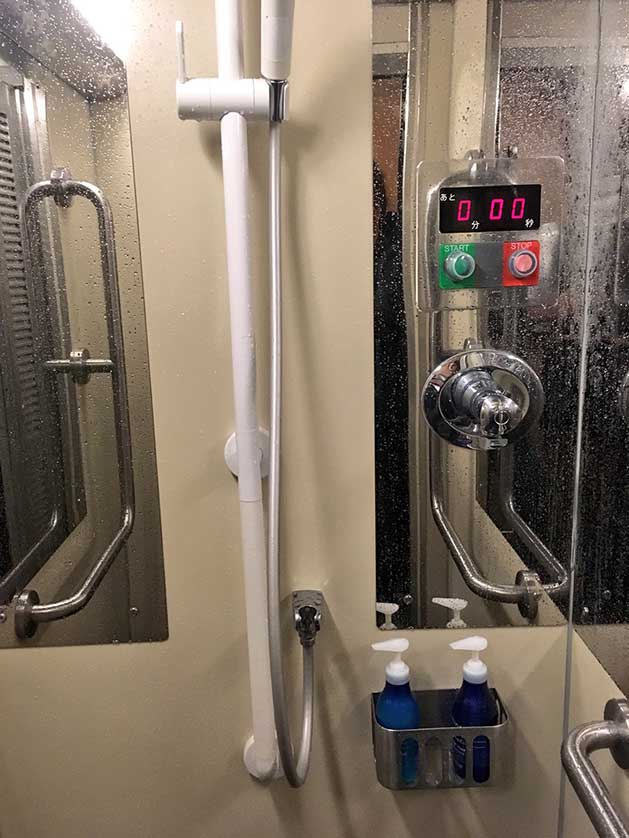 On board shower on the Sunrise Izumo Night Train

I had barely heard another passenger all night, but with the train bearing down on Izumo the narrow passageways become a hive of activity, sumimasen (excuse me) and douzo (please) ringing out as people squeeze by each other, trying to get a turn in the on board shower and grab a morning caffeine fix with a cold can of coffee from a vending machine - the only drink option on board.

With Okayama left behind, the morning scenery becomes increasingly rural. Recently harvested rice paddies unfold to the horizon as we pass through Tottori Prefecture and finally into Shimane Prefecture, parts of Japan that few overseas travelers reach. And then comes Izumo. 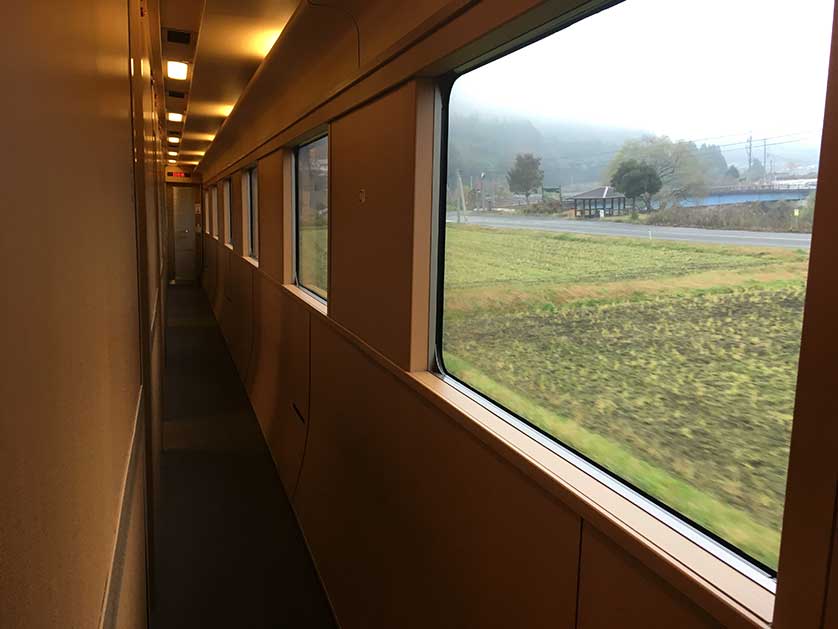 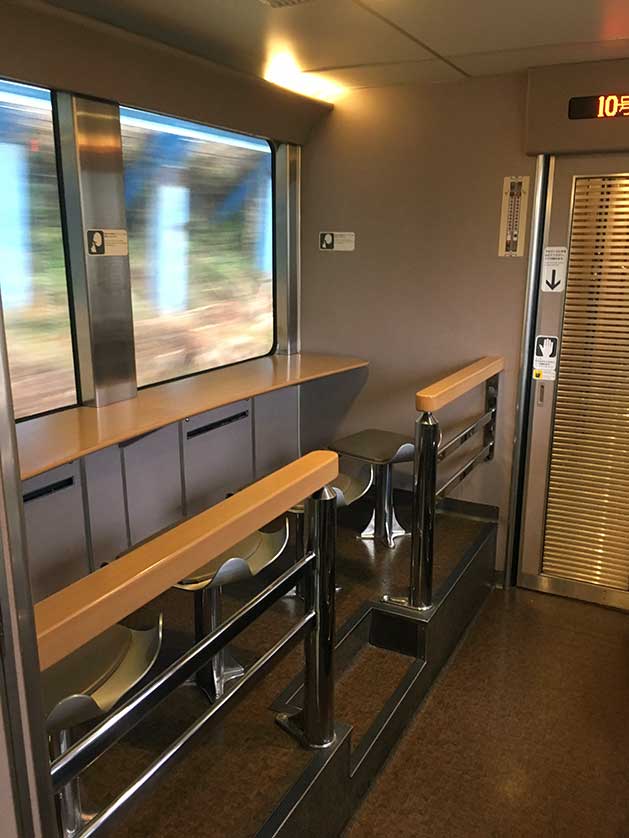 It's 9 am when the train pulls in to Izumo, and like many regional towns in Japan, there's very little to initially greet you around the station. The shrine - Izumo's main sight - is a 20-minute bus ride away. It's 30 minutes by bus to the local airport, which is where I'm headed to meet friends who opted to fly in from Tokyo.

That kills most of the morning, but in the afternoon we have time to spare before we have to be at the shrine for the Kami-mukae-shinji ritual. We spend it trying to connect the ancient shrine, Izumo Taisha, to modern-day Izumo by visiting the local sake brewery that makes sacred sake (called o-miki) for its rituals. 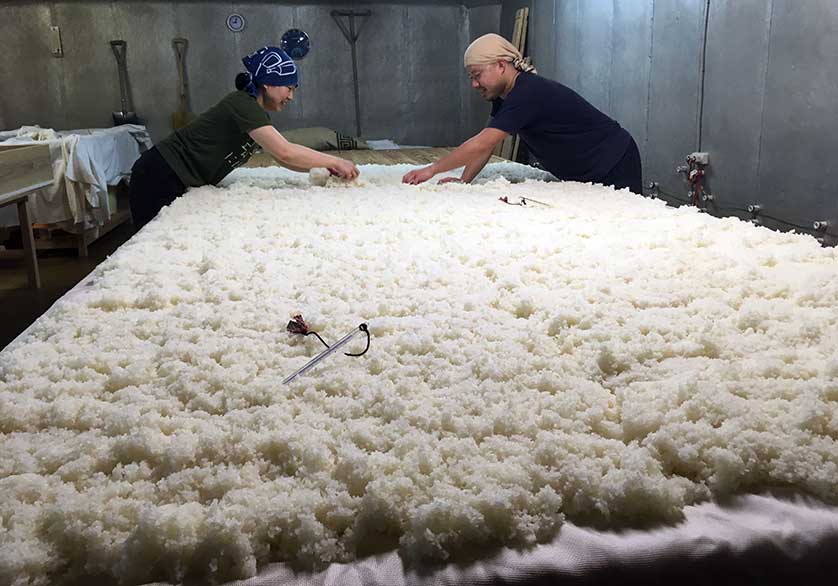 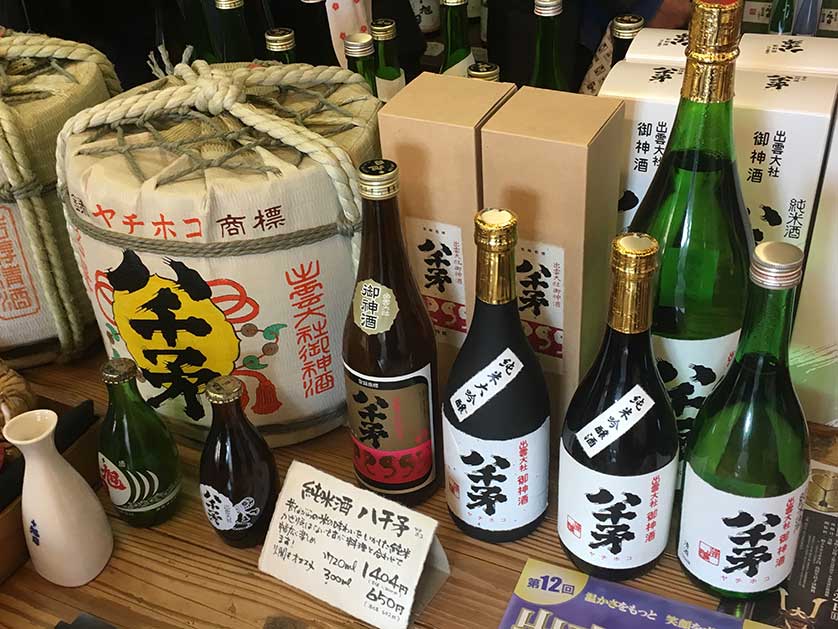 The Asahi Shuzo brewery is a small operation a few minutes from the station, and when we get there we are given the rare treat of being allowed in the koji-muro room, where cooked rice and a mold (koji) is mixed and warmed to produce a starter for the sake brewing process.

The room is a sensitive area, entered via a double door system that the staff explain stops the wrong type of mold or bacteria getting in and ruining the brew. We also have to cover our hair and leave our shoes behind.

Inside, the air is hot and damp, but infused with a delicate floral scent rich in umami, which we suck up as we chat with a couple of sweat-drenched brewers sprinkling a bed of cooked rice with koji and then mix and fold it into a heap. In a couple of days, they say, that'll form the basis - like malt does for beer - for a sake brew. 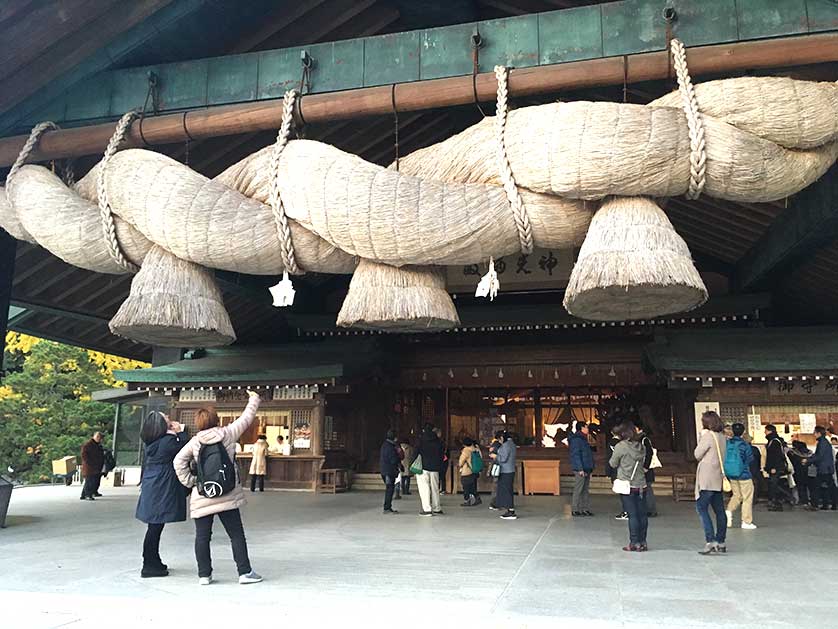 Izumo Taisha and the Welcoming of the Gods

As darkness begins to envelope Izumo, we pay a quick visit to the shrine to collect our press armbands - taking a moment to enjoy the architecture and the giant shimenawa straw decorations hanging from the buildings - and then walk 20 minutes in an ever-growing crowd to the local beach, where several priests are stoking large fires on the sand.

The flames serve as symbolic beacons for Shinto deities around Japan, who on this night of the year descend upon Izumo for a month-long meeting of the gods, deciding the fate of crops, the nation's prosperity and all manner of other matters for the year ahead. For the month, Izumo Taisha will be their home.

And on this night, the gods require a fitting welcome. The crowd silent as flames spit into the dark sky, priests chant and pray on the beach before forming a procession with gods in tow and making a slow solemn walk through Izumo to the shrine. We follow.

Back at the shrine, we and a couple of local TV crews are ushered beyond the barriers separating the crowds from the main hall, where we wait in a dim light for the procession to arrive. We hear them first, flutes and gongs repeating a droning tune in the distance, before lanterns emerge from the gloom and head into the shrine's inner sanctum.

And then, it ends. Abruptly. The shrine's lights turn on. The barriers are lifted. The crowds surge forward to get the best seats on the floor of the inner sanctum and receive blessings from the gods. The mood goes from spiritual to stampede in a flash. The only logical thing to do is follow the crowds and hope it leads to a sample of some sacred sake. 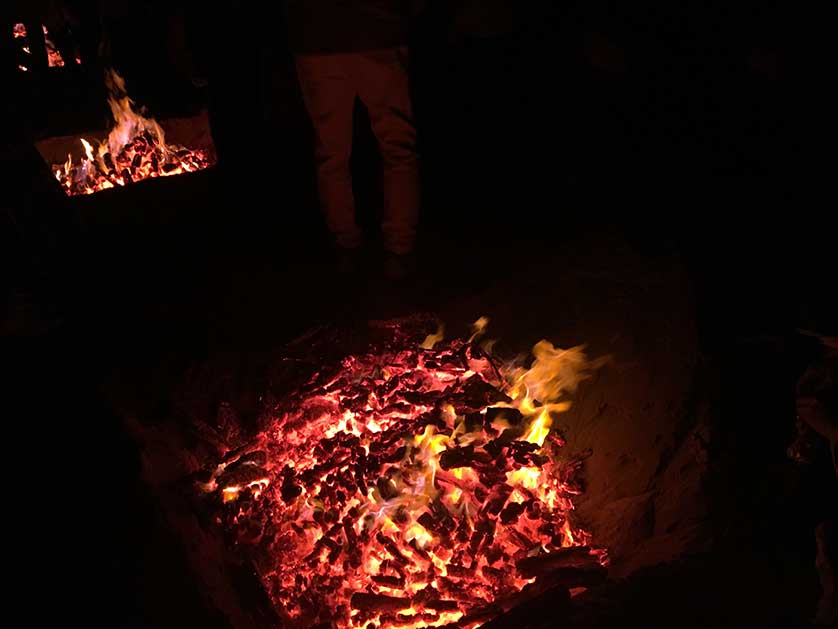 The Sunrise Izumo and Sunrise Seto cannot be booked online. Tickets can only be bought at ticket offices in major JR stations, and a JR Rail Pass (for travelers from overseas) can be used to cover the basic fare. Aim to book at least a week in advance as berths sell out quickly.

Rob Goss is a freelance journalist based in Tokyo. He is the author of several books on Japan including Japan Traveler's Companion: Japan's Most Famous Sights From Okinawa to Hokkaido