Ryugu Shrine is situated at Cape Nagasakibana (長﨑鼻) on the southern tip of the Satsuma Peninsula in Kagoshima Prefecture. 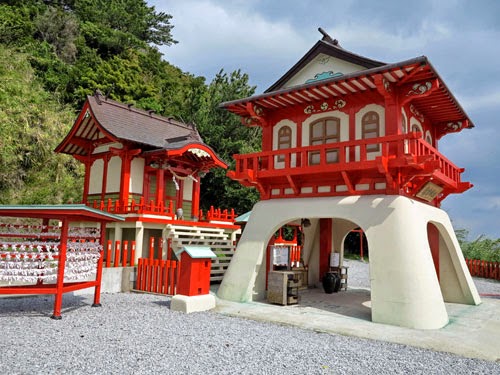 Ryugu Shrine is a modern construction built to cash in on the legend of Urashima Taro, who is said to have come from this area. The fairy story of Urashima Taro involves a fisherman saving a small turtle from being terrorized by kids. In return, the turtle (or in some versions a larger turtle that appears the following day) invites Taro to Ryugu Palace at the bottom of the sea, where he meets Otohime (Princess Toyotama), a beautiful incarnation of the small turtle Taro had saved. 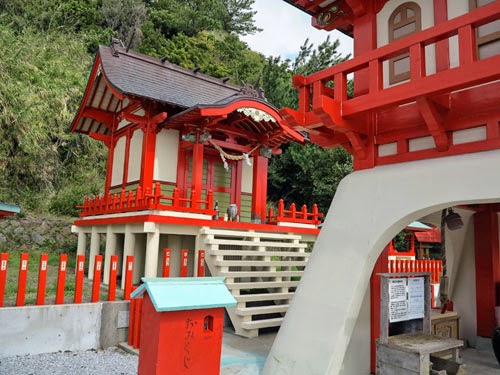 After staying at Ryugu Palace for three days, Taro wishes to return to see his aging mother. Otohime gives him a box called tamatebako, which she says will protect him from harm but which he is not to open. When Taro returns to his village no-one recognizes him and his mother is gone. In fact, 300 years have passed since Taro left. In a panic, Taro opens the tamatebako from which white smoke comes out and ages Taro 300 years. The shrine buildings we see today date from 2011. Turtles still come to lay their eggs in the area but it was rather strange to see stuffed ones for sale in the souvenirs on the road down to the shrine and the lighthouse at the cape. 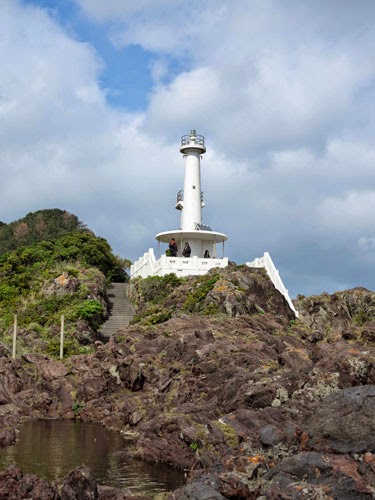 Ryugu Shrine Yamagawa-okachiyogamizu Ibusuki Kagoshima 891-0513 Tel: 0993 22 3252 There are Kagoshima Kotsu buses from Yamagawa Station on the JR Ibusuki-Makurazaki Line. Nearby is the impressive Flower Park garden with thousands of variety of flowers. Nearby is also the Nagasakibana Parking Garden (1200 yen; 8 am-5 pm) with tropical plants, parrots and monkeys. Books on Japan Some recommended places to stay in Ibusuki include the Ryokan Hakusuikan, Ryokan Kawakyu, the Ibusuki Seaside Hotel, Ibusuki Kokoronoyado, and Ibusuki Coral Beach Hotel. South of Ibusuki Station is Hotel Shusui-en and the budget Yado Matsukaze and Tamaya Youth Hostel. Budget travelers may also enjoy the Yunosato Youth Hostel.

During a visit to the Udo-jingu coastal sanctuary in Nichinan, immerse yourself in one of the founding myths of the archipelago. In addition, the landscape is exceptional.

Terukuni Shrine is the most important shrine in Kagoshima which enshrines the 28th feudal lord of Satsuma and reformer, Shimazu Nariakira.