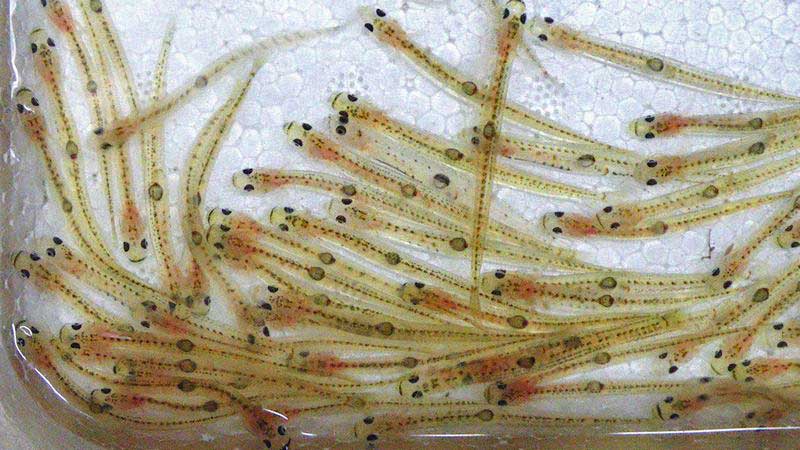 Shirouo are very small transparent fish destined to be eaten alive. They dance in your mouth - or rather do the odorigui (dancing while being eaten) as the locals in the few places where you can enjoy the fish put it.

Now, while the shirouo is always a small transparent fish, the fish that is actually eaten depends on where you are. In Iwakuni (Yamaguchi Prefecture) for example the fish are whitebait. In Fukuoka on the other hand, they are ice gobies. I have so far encountered shirouo only in Fukuoka and so we go with the gobies here.

On arrival at Fukuoka's Hakata Station by shinkansen, take the subway to Muromi Station. That's named after the nearby Muromi River. Keep walking the same direction the train took you and cross the river over a large concrete bridge. Stay on the left side of the bridge and look towards the embankment of the side you are heading to.

You will see a flat white building there which appears to be a quite temporary construction. It actually is. The building is the Koharu (小春, meaning Small Spring) restaurant and it will be dismantled at the end of the shirouo season - as every year. Then, the plot will just become a parking lot again.

From the restaurant, a barrier made of wooden posts rammed into the gravel of the shallow river, holding up rice straw mats filtering the water, stretches into the river. That's where they catch the little fish you are going to have dancing in your mouth. This barrier, called a yaru, is one of the most famous sights Fukuoka has to offer in early Spring - and it serves the locals as a strong reminder that winter is finally ending - though it's still pretty cold at this time of the year.

Outside the restaurant, a big display relates an old legend explaining the origins of the dish: around 300 years ago, it says, in the Edo period, spring floods often wrought vast damage on the area. The local daimyo (feudal lord) ordered the farmers of nearby villages to do the clean-up work.

To thank them, he served them a few barrels of sake and the farmers drank it right next to the rivers. While doing so, they grabbed the small fish populating the water with their hands and put them into their mounths - thus starting the tradition of eating shirouo in Fukuoka.

Another explanation for the love of Fukuoka folks for their shirouo is related on the same display board. 300 years years ago, the area was called Tsukushi. If it's spelled in hiragana, it looks like little shirouo fish: つくし . Or so it says here. In any case, back in olden times, the little fish were found aplenty in all the rivers of the area - today, they swim only here in the Muromi River.

Another big sign in front of the Koharu announces the variety of courses on offer, ranging form the A course for 3,000 yen to the C course for 5,000 yen. The restaurant folks just take those poor little fish and turn them into tempura and tsukudani rice toppings or boil them in cha wan mushi egg cream.

But these fish are not supposed to be treated like that. They are small transparent nothings - turning them into something intended to fill the stomach means to turn them into something bland and boring. You came here for the exciting stuff, right? So, just order the straight shirouo for 1,800 yen and let the fun begin.

Inside the restaurant, it's all very basic and functional, but in an old-fashioned Japanese style with those great old kotatsu tables: built over a hole in the tatami for your feet and legs, they cover your lower parts with thick warm blankets and have a heater underneath.

You have great windows towards the river and if you are lucky, you will see the old man harvesting the fish from the nets inbetween the rice straw barriers spanning the river with its amazingly clear water. We are in more or less urban Fukuoka here and yet the river seems to be as clear as a mountain stream. Plenty of birds sit on top of the posts, it's a beautiful and romantic place here. 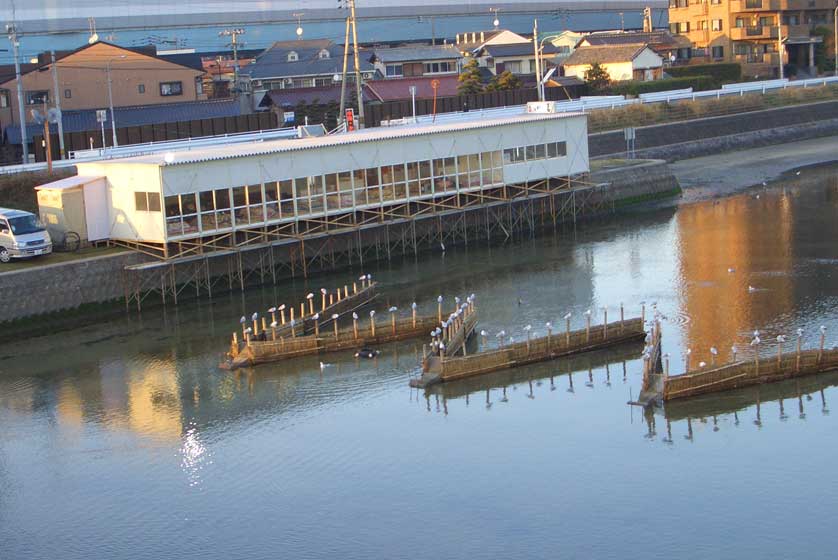 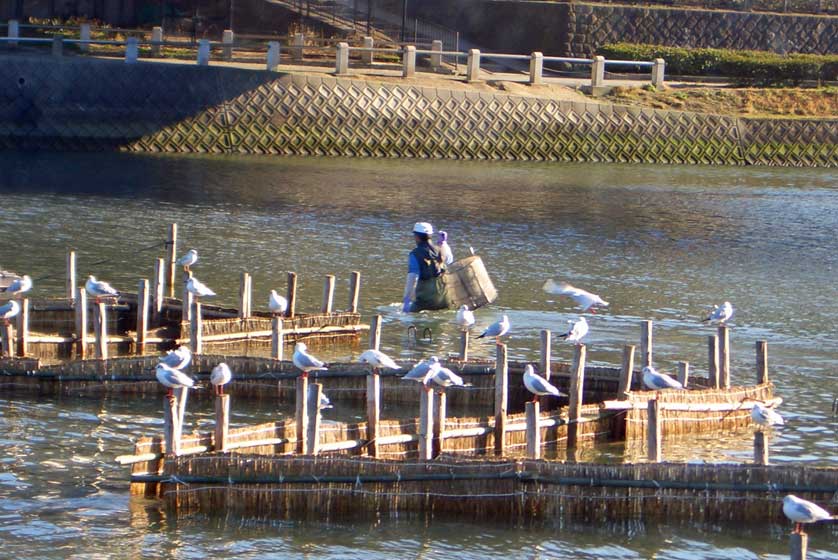 The cute little fish will arrive on your table in a big bowl, darting through the water and most likely dreaming about sex. It's their annual mating habit that has them swimming up the river, and getting them into the trap that brought them to your table.

Along with the bowl of fish come a quail egg and a bottle of vinegar. You crack the egg and pour it into the cup provided, then mix it with some vinegar.

Then, you start the delicious cruelty with a device which is half ladle half sieve, you catch some of the fish out of the bowl and throw them into the smaller bowl of quail egg / vinegar mix. Locals will tell you that the vinegar is numbing the fish, rendering it unconscious. But if you look at the proceedings yourselves, you will discover that the vinegar may be pure torture to the poor little beast - it wriggles like crazy.

Now, you catch the little fish with your chopsticks, look at it while it hopelessly wriggles for its life, and no, you don't walk out to the nearby river to put it back home. You put it into your mouth. And let it dance. It's quite a sensation to have the little devil jump through all of your oral cavity. He tingles your tongue, he might jump at sensible taste nerves never touched in years. This doomed little guy may even reach pleasure zones you didn't know you have in your mouth! Cruelty can be so beautiful! Let him jump around in your mouth just a little more! 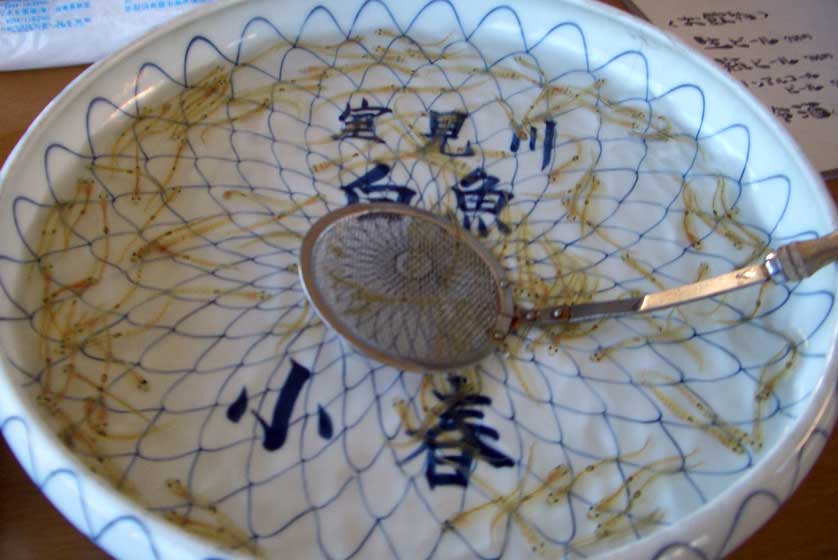 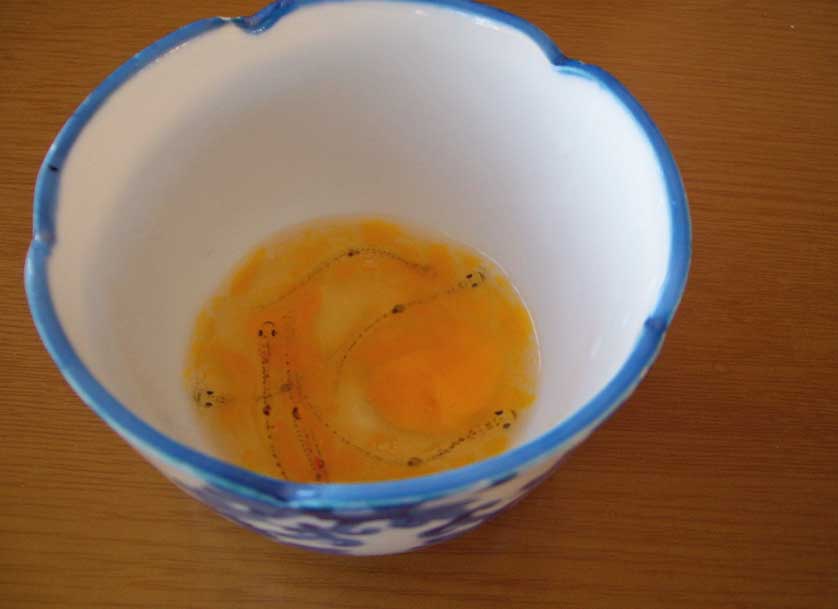 Eventually, of course, the question arises To Swallow or Not to Swallow? I always preferred to crush the little beasts between my teeth. Killing them brutally but sparing them any further discomfort.

My Japanese friends tend to swallow them alive and then tell me that they swim freely through their stomach and irrite their intestines, which was of course always a great excuse for drinking large cups of strong shochu to get rid of those strange feelings deep inside their bellies.

I always joined them on the shochu a great way to finish off an afternoon of exquisite pleasure. 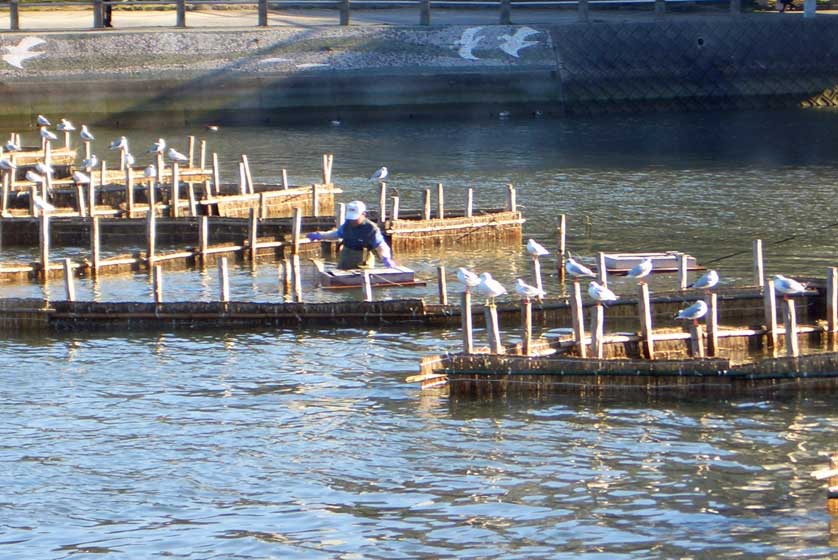 Koharu RestaurantFukuoka-shiNishi-kuAtago 1-chomeMuromigawaKahanTel: 092 882 7938 (only in operation during the season)Hours: Daily 11am - 10pm, last order 9pm

The views expressed in this article are solely those of the author.A version of this article first appeared in Kansai Time Out magazine.