Umibudo (sea grapes) is a type of seaweed snack harvested on the Okinawan island of Miyako.

The Taste of the Southern Sea: Umibudou - Sea Grapes 海ぶどう 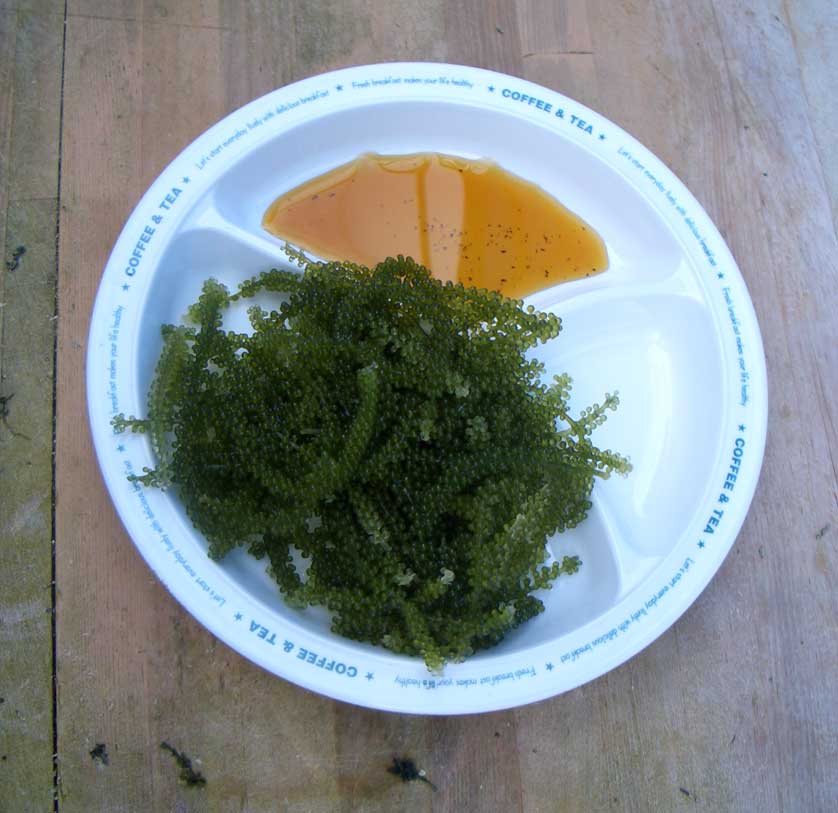 Sure, a cold, fresh, draft beer is best to cool off your dry throat after a long, hot summer's day. But a really nice snack with that beer would make it even more perfect, wouldn't it?

For such a snack, there is hardly anything that can compete with a plate of freshly harvested umibudou served with a soy sauce / vinegar dip.

Umibudou literally translates as "Sea Grapes." It's a kind of seaweed but instead of leaves it has little bubbles growing on its stems. Thus the serving looks like small, green grapes. The bubbles break on your tongue and release a slightly salty taste of pure Southern Sea freshness.

This breaking of little bubbles is called puchi-puchi in Japanese, an expression recreating the sound of the burst of a small air bubble. Not many foods provide that puchi-puchi sensation on the tongue - making the umibudou an especially exciting experience for many Japanese gourmets.

The umibudou grow in the waters of the Western Pacific all the way from Vietnam in the south to Okinawa in the north. There are however only two areas in that vast expanse of the sea that are famous for serving those tiny grapes as delicious food. One would be the Philippines where they use the very fitting name of Green Caviar and the other is Okinawa, the northern-most area where the plant is able to survive. 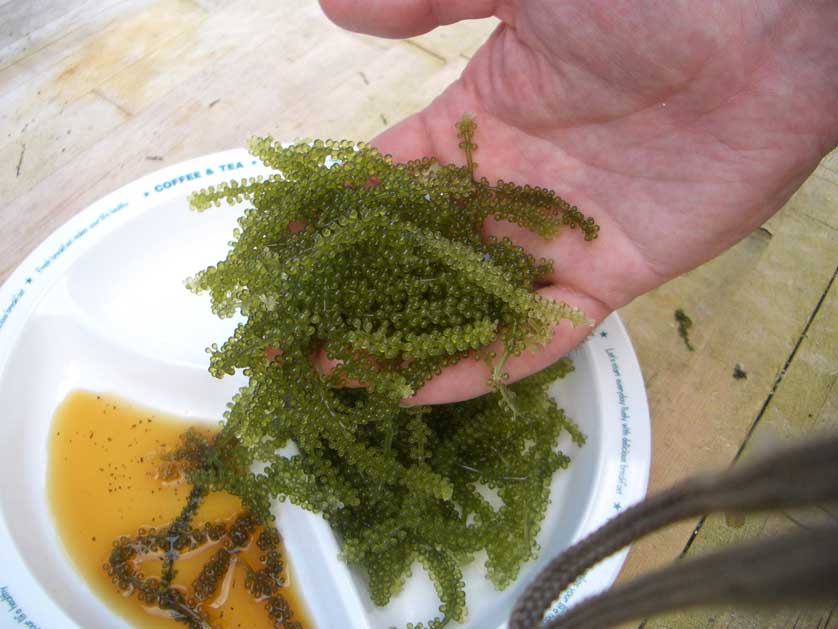 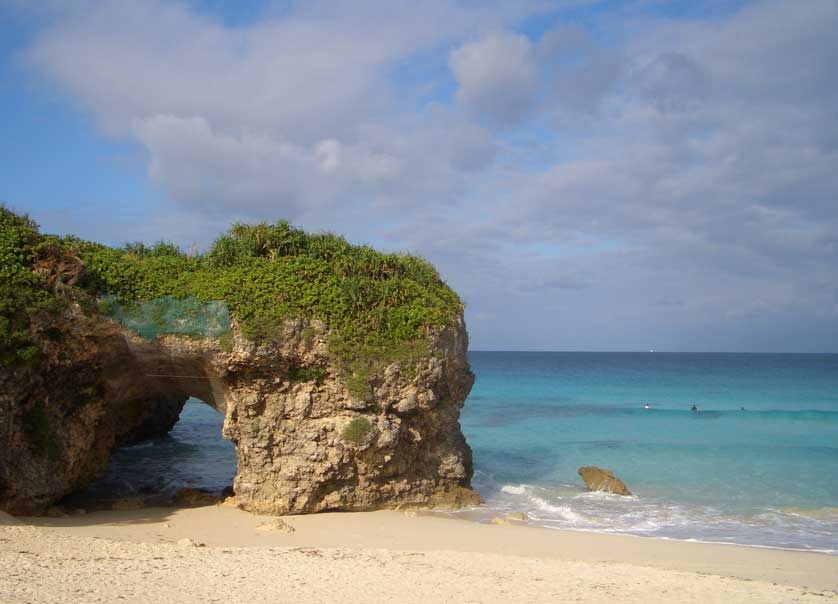 In Okinawa, the farming of the umibudou is centered on the island of Miyako, about halfway between the Okinawan main island and the Yaeyama archipelago around Ishigaki Island at the southern end of Japan.

Miyako is fairly large, about 25 km long and it has enough sites and interesting, small byways to make you rack up quite some kilometers on the odometer of your rental car. It is essentially a destination for scuba divers wanting to explore the truly beautiful coral banks around the island.

The main town is Hirara on the southwestern edge of the island. In the daytime, Hirara looks fairly beaten up and somehow stuck in the 1970s. Small, old, concrete buildings dominate the town, most of them scarred by the markings of severe typhoons.

At night however, lots of restaurants open and the variety of local food is astounding - and umibudou are a natural part of it. In most cases, the grapes are served along with beer as a small side dish in izakaya pubs. That's the most traditional and perhaps most fitting way to enjoy them. 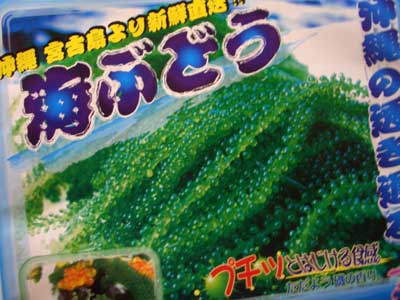 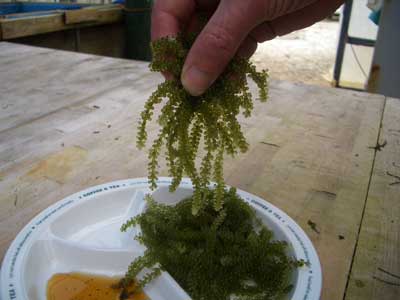 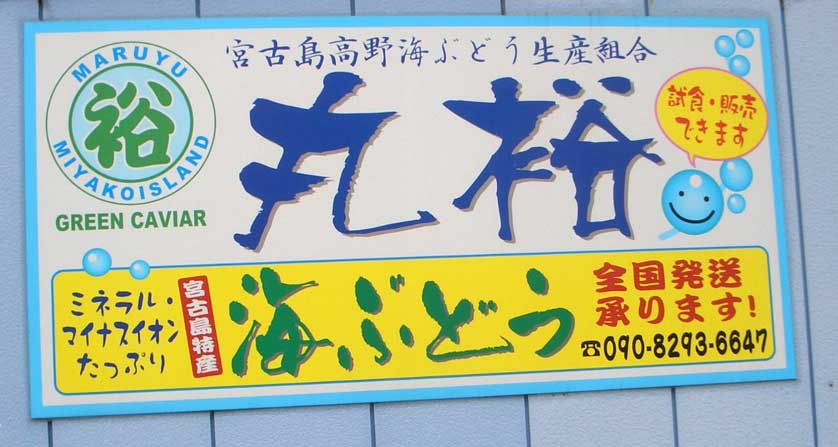 There are however ambitious restaurateurs who take it all some steps further. One of them is the Ofukuro-tei Restaurant in downtown Hirara. Here, the budou is taken very seriously. One of the signature dishes of the house is the umibudou kaisendon, a big bowl of rice with a thick layer of grapes on top, mixed with various sashimi.

The Nanraku Restaurant, also in downtown Hirara is a bit more playful. The chef uses only traditional local products but always gives the dishes an original new twist. His nekomanma (literally "leftovers for the cat") combines katsuo tataki (raw sliced skip jack tuna slightly roasted on the edges) on a bed of a mix of vintage-era style rice along with a generous serving of umibudou.

The sea grapes are dear to the restaurant owner and on the walls hang huge posters with mouth-watering pictures of them. On closer inspection, you can see that the posters originate from an outlet called Nagazaki Sea Farm. 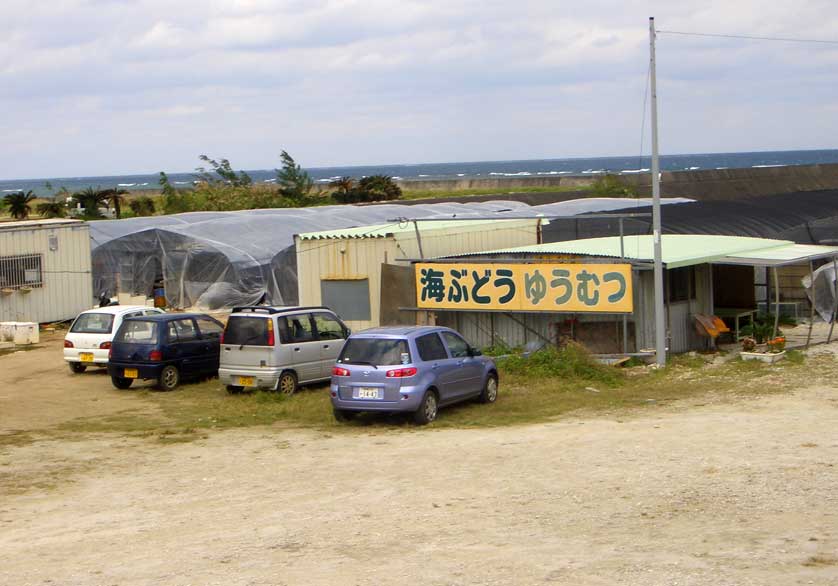 Curious, I decided to pay that farm a visit. Driving out to the farm (which is even noted in the local guide maps) on the east coast of the island defies expectations, though. There is no big industrial farm to be found at all. Rather, there is a cluster of small greenhouses run by several families and the Nagazaki Sea Farm is just one of them.

Nonetheless, Teruyoshi Nagazaki is the person to talk to about umibudou on Miyako. Nobody does more promotion for the product, nobody is so committed to spreading knowledge about the grape-like undersea weed than he.

Asked for an unannounced interview, Nagazaki-san immediately offered a plate of the sea fruits and went on to answer questions without a blink. He knows all about his grapes and loves to talk about them. He is not a PR guy schooled in what to tell the press but an honest, heavy-set farmer who wants to spread knowledge about the product he is growing - a spokesman by default in a way, as nobody else on the island seems to have as much energy as him in promoting the plant.

Nibbling on my largest plate of umibudou ever with a very fitting dip of soy sauce mixed with vinegar, I wanted to find out first about the history of the plant.

"It was just a very local food here on Miyako," Nagazaki explains, "Up until the end of the American occupation only locals harvested the plants." Okinawa was an American territory from the end of World War II until 1972 when it became part of Japan again.

"The locals only harvested the wild ones growing out in the sea," Nagazaki continued, "But then, people found out that there could be a larger market for them in mainland Japan. People started to farm them out in the sea but that didn't work well. Sand got in the plants, causing serious quality problems.

Also, in natural conditions, they grow only from May through August. The local Miyako-language name n'kyafu was not helpful in selling the product either. Neither was the Japanese academic name kubirezuta. Eventually, the growers came up with the word umibudou, literally "sea grapes" and that name turned out to be very appealing to customers." 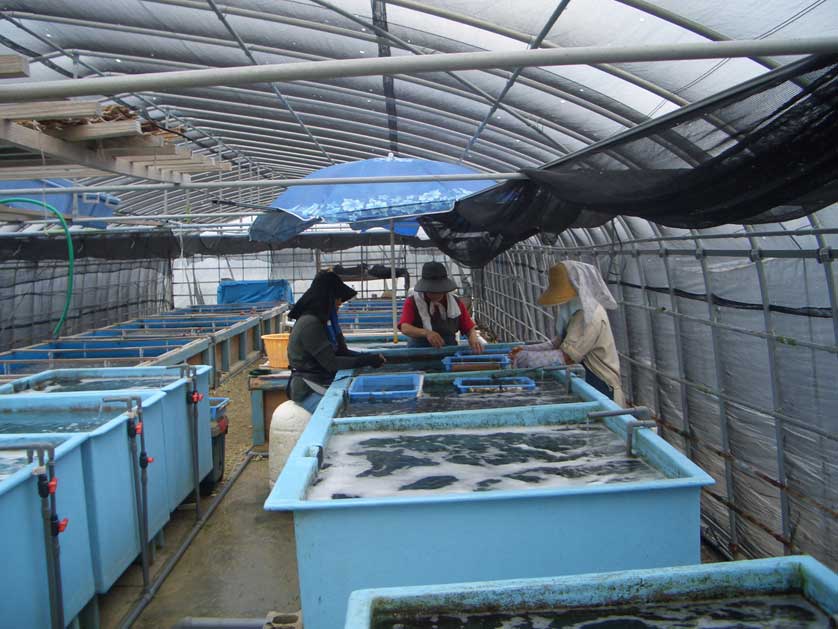 Nowadays, umibudou are shipped from Miyako to restaurants and pubs all over Japan. To some restaurants and some pubs, to be correct. Finding a place serving them in mainland Japan is still a challenge.

One of the reasons for that is that there are only seven family farms on Miyako, none of them very big. New farms have opened on the Okinawan main island (known around these parts as Okinawa hontou) but those new farms face the same problem all umibudou farmers have to struggle with: the product quickly turns bad once it becomes too cold.

There are delivery services in Japan that guarantee that things are transported in cold conditions, there is no such service guaranteeing constantly warm conditions. Especially in air transport, temperatures can suddenly drop and air transport it has to be as they stay fresh for only 3 or 4 days after harvest. All of which makes it a plant best enjoyed right where it grows.

Umibudou are farmed in greenhouses equipped with large fresh-water tanks. Nagazaki's farm is located right behind a kuruma ebi (tiger prawn) farm. To feed the pool of the prawn farm, fresh seawater is piped in from 300 meters out in the ocean, ensuring a steady supply of clean water. Nagazaki then directs the water from the prawn farm into his greenhouses.

In the tanks, plastic rosters hold the plants. New seedlings take 3 or 4 days to grow roots. In the summer, it then takes 25 to 30 days for the umibudou to ripen into harvest-ready plants. In the winter, it takes longer, about 40 days.

In the coldest months, the outside temperature might drop down to 10 degrees Celsius though inside the greenhouses it will still be around 17 Celsius, anything below that would be dangerous for the well-being of the plants. In any case, by using the greenhouses farmers can now grow the "grapes" all year long and by keeping them in the tanks, the problem of sand getting mixed in is solved is well.

But things are not all that easy. In the fall of 2009, two typhoons hit Miyako Island one right after the other and those typhoons brought severe temperature drops with them. "It wasn't a good harvest at that time." Nagazaki explained. "Usually, a tank holds 20 to 30 kg of the plants at harvest time. After the typhoons, it was only 12kg and the fruits were much smaller than usual." In this kind of small-scale family-run agriculture, the weather is still a big risk, even under greenhouse farming conditions. Not to mention that typhoons are a rather frequent occurrence on Miyako.

In the foreseeable future, umibudou might remain a rare treat in mainland Japan. But in Okinawa and especially on Miyako, you can enjoy them aplenty and in many ways - the simplest way perhaps still being the best - a plate of the fruit with a dip going with that beer on a hot summer evening. 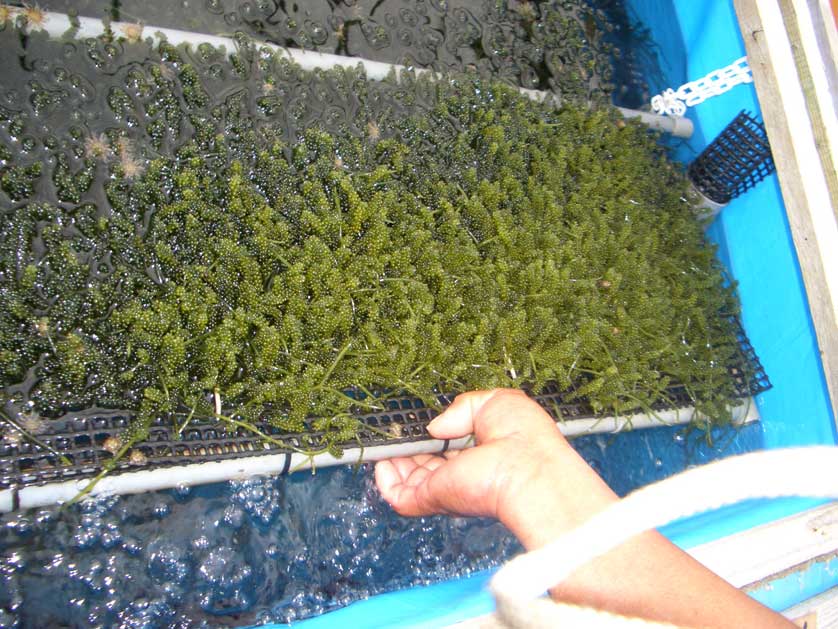 Official long name: Minami no shima no shoku to sake no rakuen nanraku