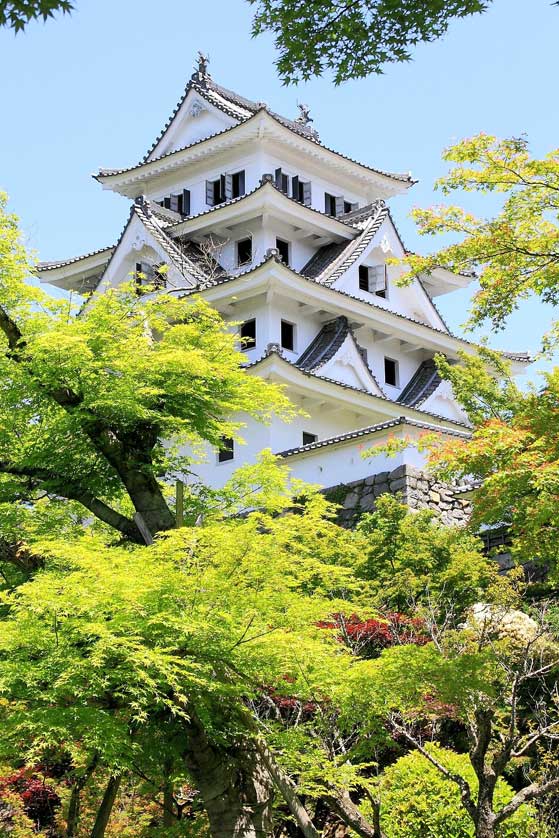 Gujo Hachiman Castle is perched on top of the steep hill of Mount Hachiman, overlooking the delightful town of Gujo Hachiman below.

Gujo Hachiman Castle was initially constructed by Endo Morikazu in 1559, though control of the fortress later passed to Inaba Sadamichi and then back to Endo's son Yoshitaka following the Battle of Sekigahara and victory for the forces of Tokugawa Ieyasu in 1600. Gujo Hachiman Castle was further renovated in 1646 by Endo Tsunetomo.

In 1754 the Gujo-ikki (Gujo Rebellion), a peasants' revolt took place when the fief and Gujo Castle was under the control of the Kanamori clan. The peasants' appealed directly to the Tokugawa shogunate and as a result the Kanamori were replaced by the Aoyama. This is the only such case during the over 200 year history of the Edo Period when around 300 peasants' revolts occurred that peasants' demands were actually met by the authorities.

After the Meiji Restoration of 1868 Gujo Hachiman Castle was demolished three years later in 1871, leaving only the impressive, moss-covered stone walls and the foundation stones.

A wooden reconstruction, on a much grander scale, was completed in 1933, the first such rebuilding of a previously demolished Edo Period castle. Gujo Hachiman Castle, indeed, is the oldest reconstructed wooden castle in Japan.

There are fantastic views of the surrounding countryside from Gujo Hachiman Castle, the interior of which is now a museum with displays of samurai armor, swords and ornate byobu (folding screens). Of special note is a suit of samurai armor (samurai yoroi) that was passed down in the Aoyama clan and the kin-no-dohyo, a gift to the Aoyama from Ieyasu Tokugawa.

The grounds of Gujo Hachiman Castle are a popular cherry-blossom (sakura) viewing spot in spring and also attract visitors for their fiery maples in the fall. In mid-November, the castle is the venue for a Momiji (maple leaf) Festival which includes taiko drum performances and light-ups of the trees at night.

On the ascent up to the castle are statues of Chiyo, the daughter of the first lord Endo Morikazu and Kazutoyo, the first lord of Kochi Castle in Shikoku. Chiyo is held up as a paragon of virtue, wisdom and frugality. 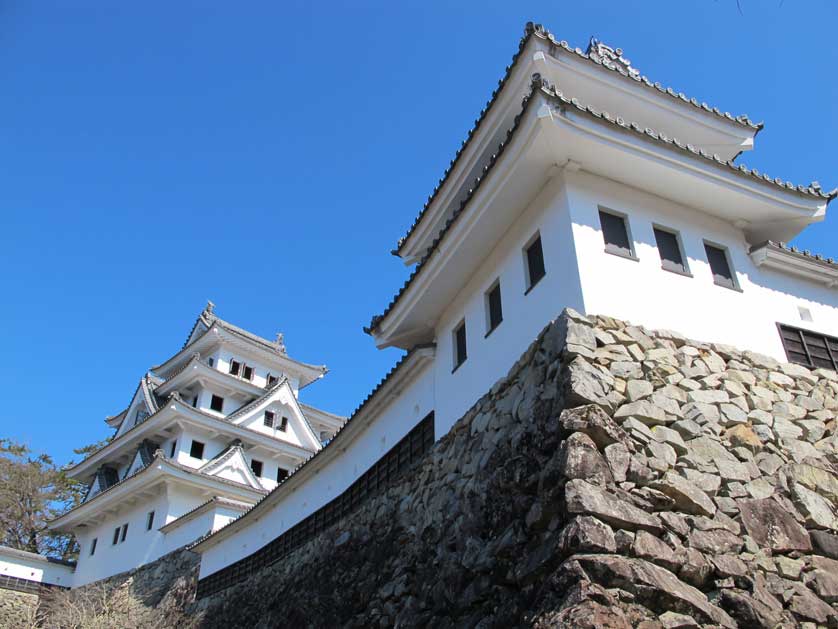 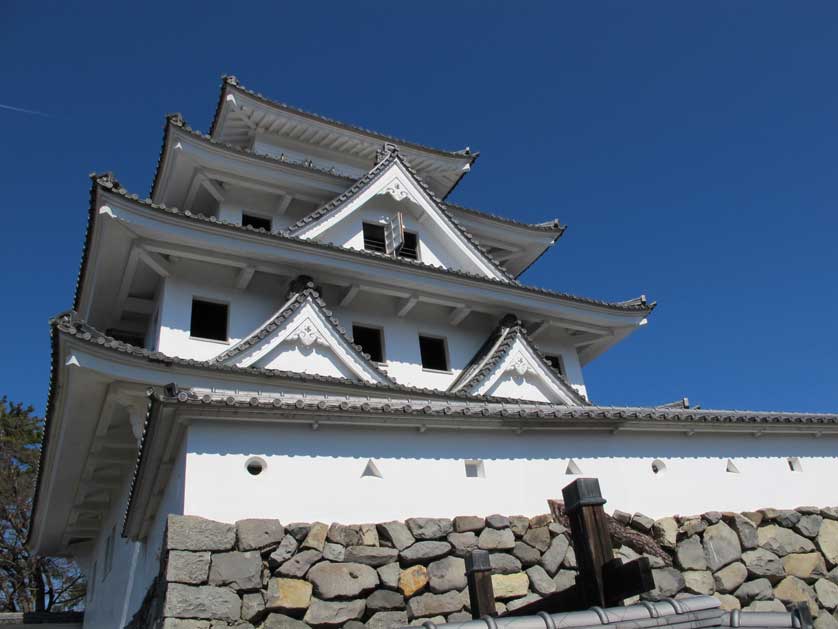 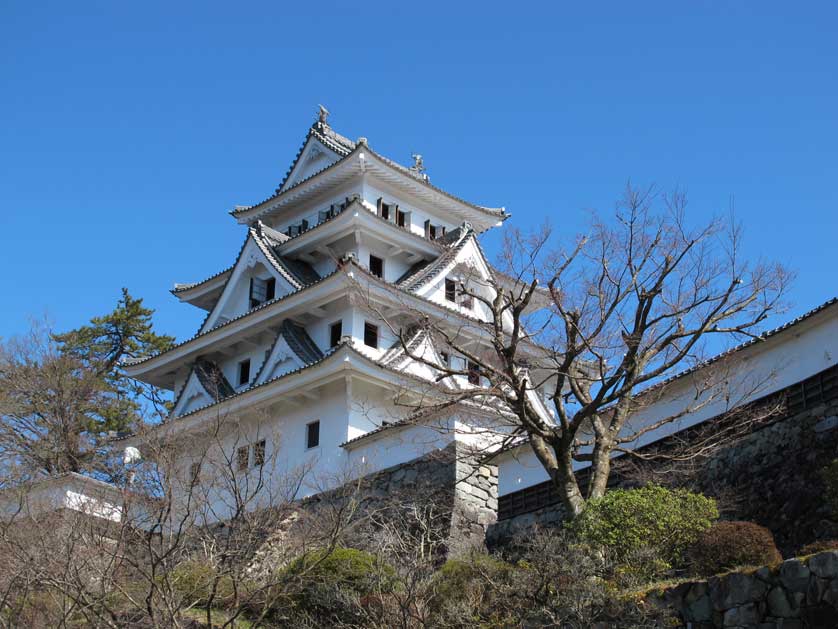 Gujo Hachiman Castle is a short (20 minute), steep walk from the Jokamachi Plaza bus station past the Anyo, Zenkoji and Gochikuin temples and the Hotel Sekisuien. Alternatively walk up the steps from the Kahi Poem Stone over the bridge from the tourist office. Gujo Hachiman Castle is easily visible from most parts of town. There is a road leading up to the castle, a car park and souvenir / snack shop at the top of the hill near the castle entrance. 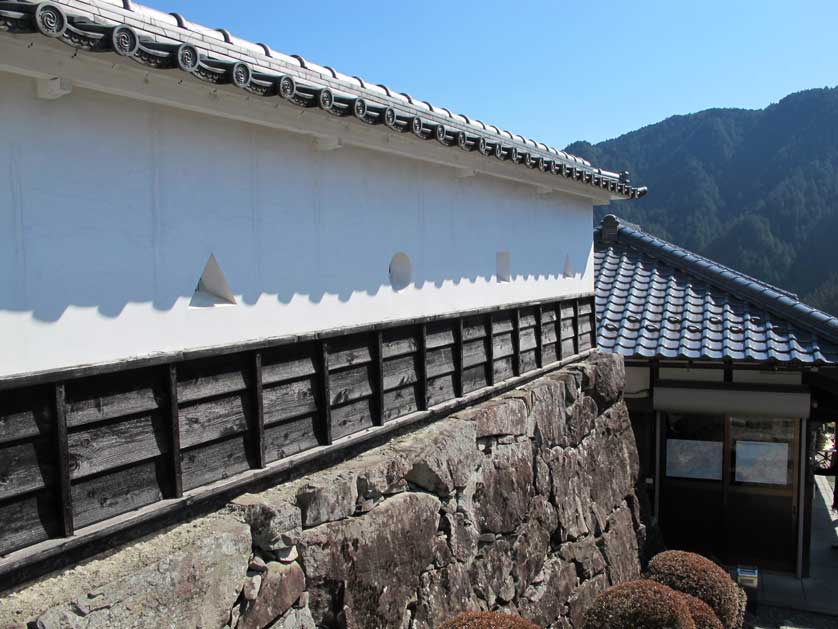 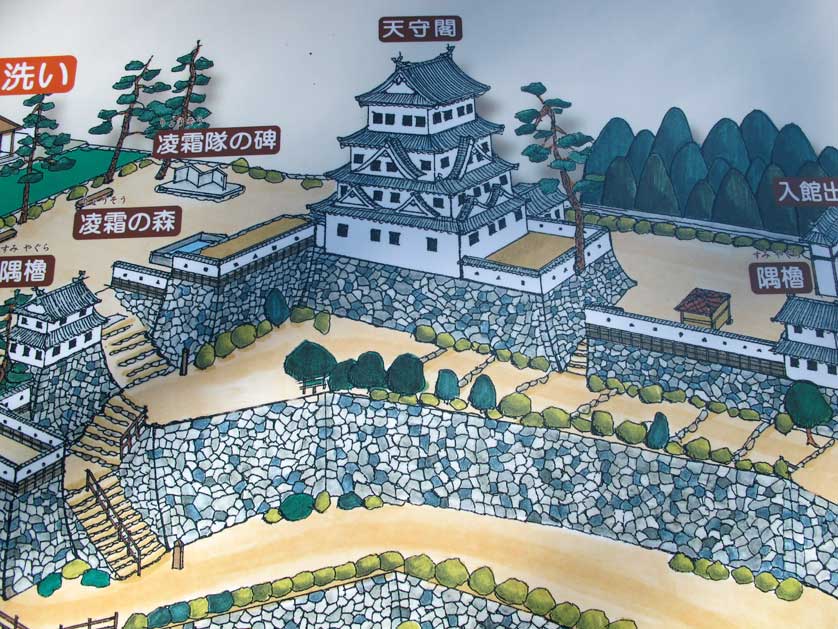