Visitors to Gero Onsen in Gifu Prefecture, should try to visit Zenshoji Temple (禅昌寺), a Rinzai-sect Buddhist temple, just one stop north on the JR Takayama Line from Gero Station. 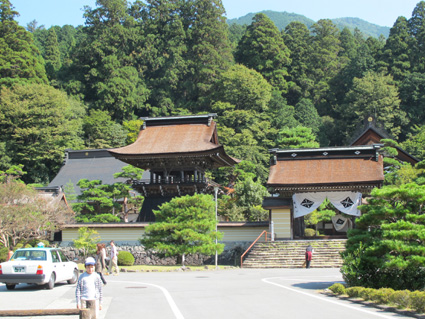 Zenshoji Temple has on display a famous ink painting known as Happo Nirami Daruma by the artist and garden designer Sesshu (1420-1506). The painting (below) shows the mysterious Indian Buddhist monk, known as Bodhidharma, who lived during the 5th and 6th centuries, traveling widely in China and south east Asia. Bodhidharma is credited as the founder and inspiration of Zen Buddhism and a number of miraculous tales grew up surrounding him. Behind the main hall of Zenshoji Temple is a garden built up into the hillside, full of beautifully tendered bushes, stone lanterns (toro) and water purification basins (tsukubai). To the left as you enter the main grounds of Zenshoji is a huge 1000-year-old cedar tree. 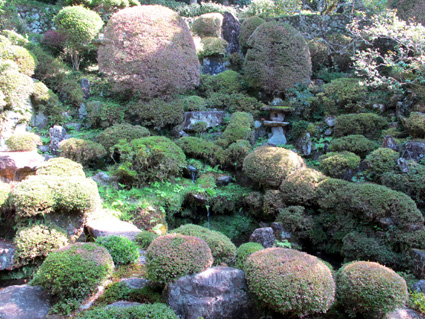 Gero Onsen is easily accessible by train or highway bus from Nagoya. There is also a direct highway bus to Shinjuku in Tokyo. Route 41 leads to Gero directly north from Nagoya city, if coming by car. The Hichiso Precambrian Museum is on the way. From Gero the temple is less than 10 minutes by car. Zenshoji Temple Hagiwara-cho, Churo, 1089 Tel: 0576 52 1353 Admission: 300 yen

Exterior of the temple

Nemichi Shrine (根道神社), known as Monet Shrine, is located in Gifu Prefecture in central Japan and has become a tourist destination over the last few years.