Chiran Samurai District in Kagoshima Prefecture is a street of higher class samurai residences with seven beautiful Japanese gardens open to the public.

The Edo or Tokugawa Period (1603 to 1868) is often referred to as Pax Tokugawa, ("The Tokugawa Peace"), because it brought to an end the almost incessant warfare between rival warlords that had for several centuries embroiled Japan to the extent that the period is known as the Warring States Period. 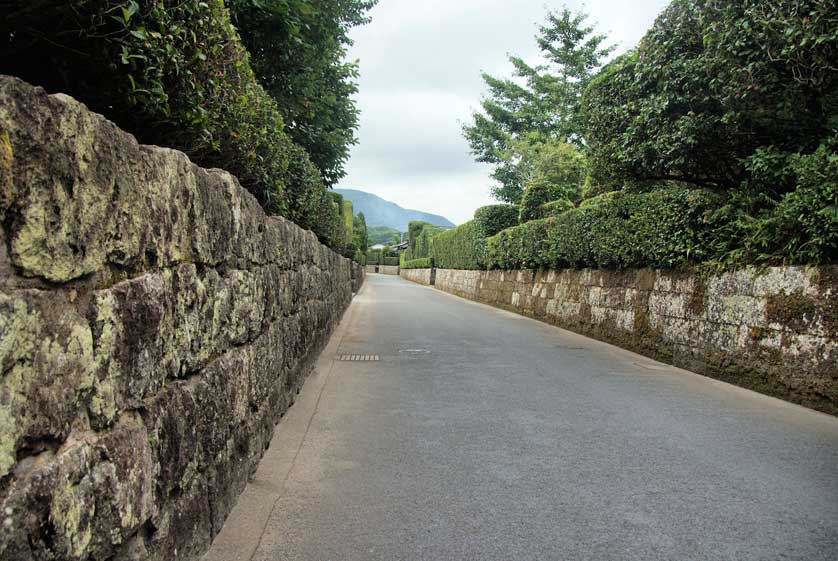 This new found peace and stability was achieved by a series of controls placed on the warlords by the new Shogunate, the most well known of which was the sankin kotai system that stipulated that each daimyo (feudal lord) must maintain a residence in Edo (Tokyo) and live there in alternate years, and when back in their home domains their families would remain in Edo as hostages. This led to Edo becoming one of the biggest cities in the world.

Another control was that each domain could only have one castle, and that the samurai must live in the vicinity of the castle. Hundreds of smaller castles were destroyed and around the remaining castles towns grew up which led to an acceleration of the merchant economy and the creation of the urban culture that is now considered characteristic of the period. In many of these towns upwards of 40 percent of the residents would be samurai.

At the far southern end of Kyushu, about as far as it was possible to get from Edo, in the Shimazu clan's domain of Satsuma, present day Kagoshima Prefecture, they chose to do things a little differently. Instead of bringing in all their samurai to one central location they did the opposite. They dispersed the samurai all over the domain. This may have been due to the fact that Satsuma had a lot of samurai.

Across Japan as a whole the samurai made up about 10% of the population, but in Satsuma it was more like 40%, and the Shimazu distributed them across more than 100 districts. Of course this was technically illegal, but the shogunate seems to have ignored it, but perhaps as a justification for the clan's rather small and unimpressive main castle, Tsumaru-jo, the daimyo proclaimed that a land is not protected by a castle but rather by its people. 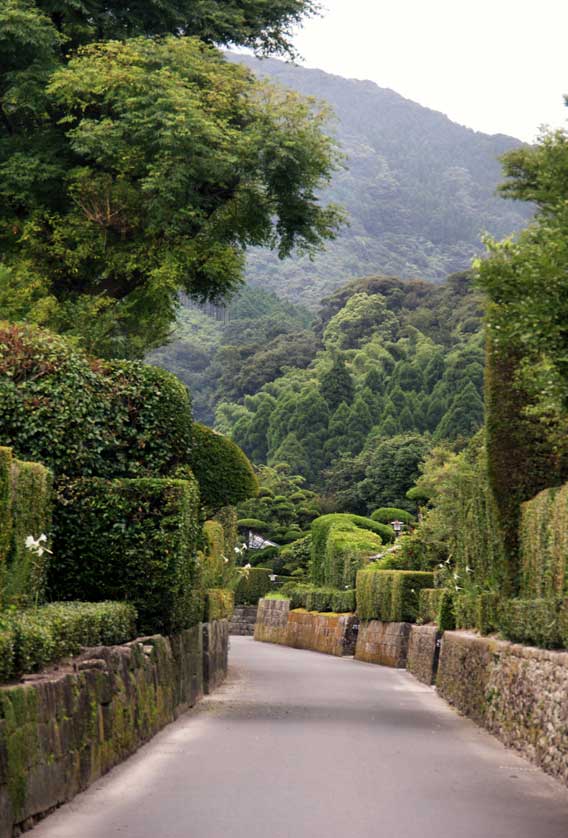 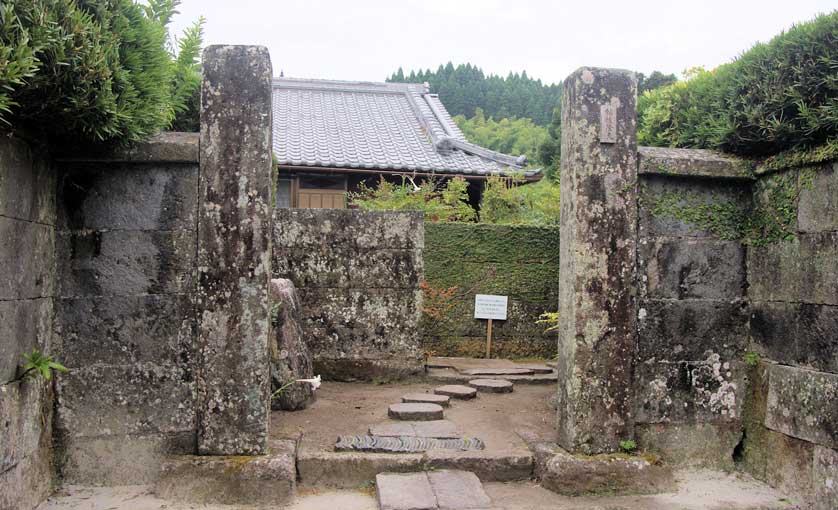 One such district was Chiran, and by virtue of its location in the middle of the peninsula, far from urban development, the samurai district has been preserved. The street of higher class samurai residences now runs parallel to the main street of the town, and its narrow length flanked by substantial stone walls topped by hedges appears pretty much as it would have centuries ago thanks in part to the absence of the power lines that blight so many other historic districts in Japan.

The stone work was defensive, for each of these 100 plus districts was a mini fortress, as further evidenced by the castle-like entrances to some of the properties. That had been a castle in Chiran since the twelfth century but it burned down at the end of the 16th century and was not replaced. Just to the east of the samurai street however are the ruins of some subsidiary fortifications of the castle. The samurai who lived on this street were wealthy, they made their money by growing tea, something for which Chiran is still famous, and with wealth came culture, which leads to the delights of this particular samurai street; seven well preserved gardens.

Most of the gardens were built in the 17th century by gardeners brought from Kyoto for the purpose. Each garden is designed to be viewed from the house, but unfortunately none of the houses are open to the public as most are still lived in, but all seven gardens can be viewed from within the grounds. Since 1975 the gardens have been maintained by a Preservation Society, and though small they are quite exquisite. They are registered as National Cultural assets. Six are of the karesansui, dry style, one of which is quite unusual being composed almost completely of trimmed bushes. 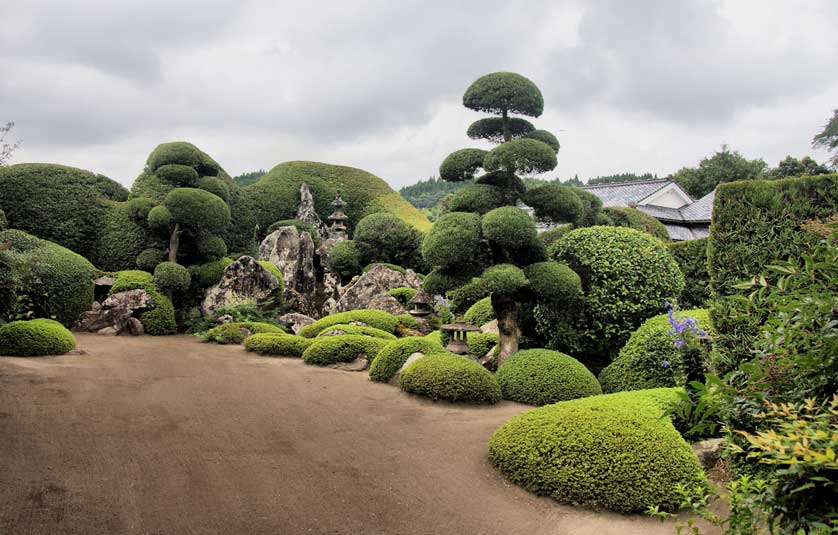 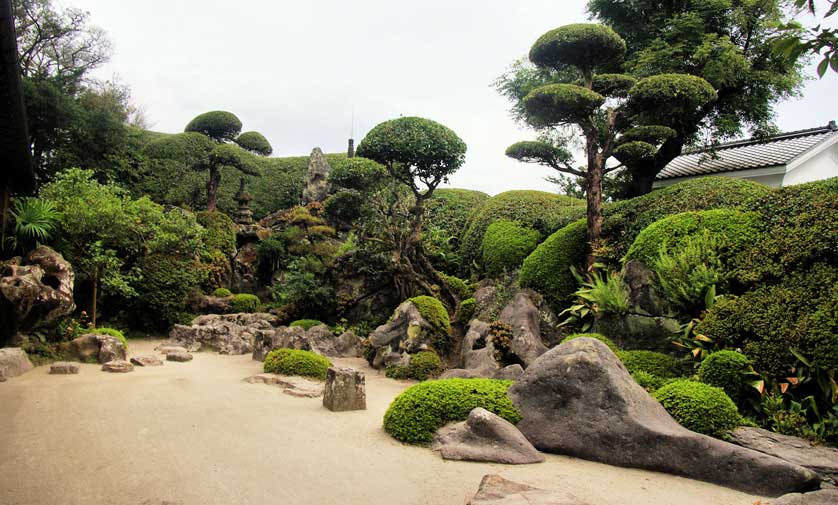 Admission to all 7 gardens is 500 yen, but tickets cannot be purchased at the gardens themselves but at ticket offices at either end of the samurai street or at 3 other sites along the nearby main street.Open from 9 am to 5 pm all year round.Kori, Chiran-cho, Minamikyushu, Kagoshima 897-0302
Tel: 0993-58-7878

From Kagoshima Chuo Station take a train on the Ibusuki Makurazaki Line to Hirakawa Station (36 minutes) and then a bus to Chiran (32 minutes). Alternatively there are buses from Kiire Station to Chiran. There are also direct buses from Kagoshima to Chiran samurai district and the Chiran Peace Museum for Kamikaze Pilots from Yamagataya Bus Center and Kagoshima Chuo Station. From Yamagataya Bus Station the first bus in 6.20 am and the last bus is 6.10 pm. The journey time is 1 hour and 26 minutes.

The Chiran Peace Museum for Kamikaze Pilots is a short drive away by hire car or taxi. 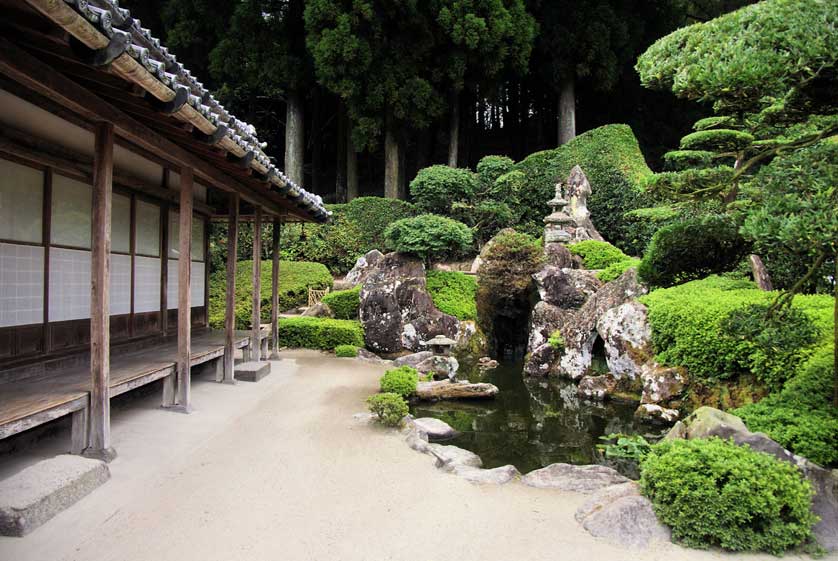