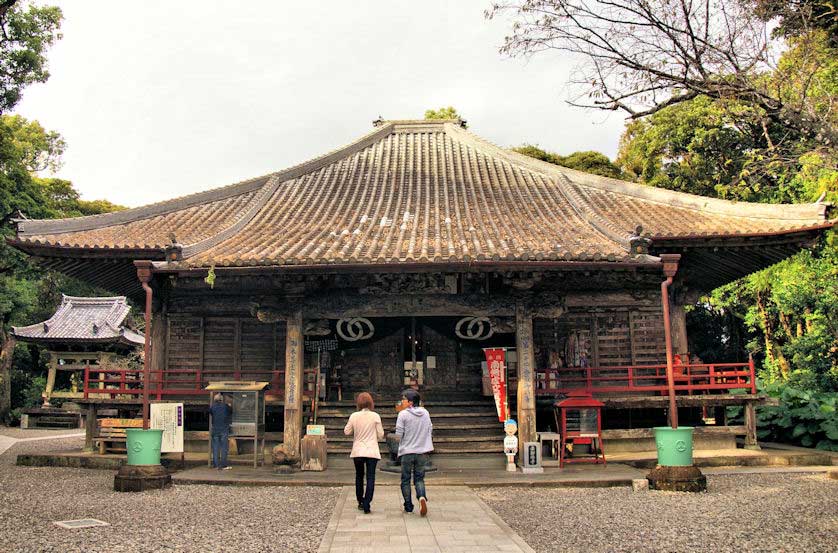 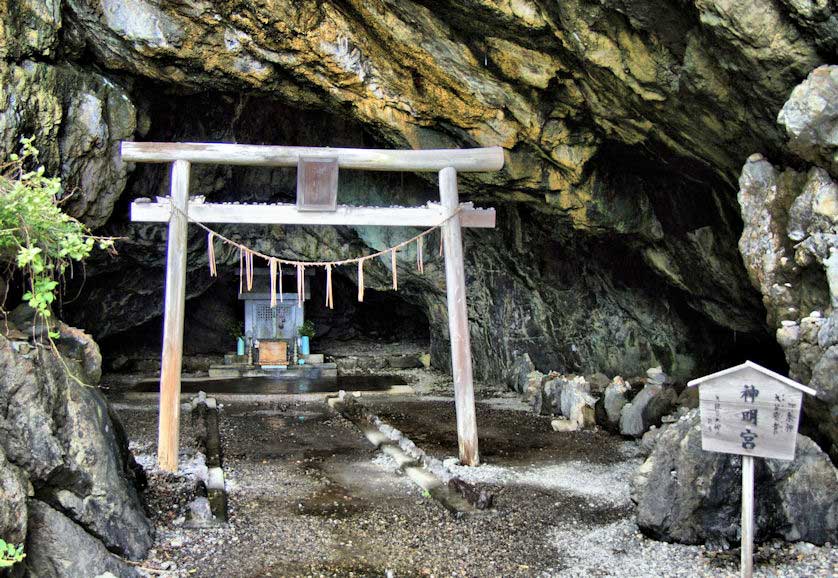 Mikurodo, a cave on the seashore at Cape Muroto where the Japanese holy man Kobo Daishi spent years meditating and undergoing ascetic training

The twenty fourth temple on the 88 temple Shikoku Pilgrimage around the island of Shikoku is Hotsumisakiji, located overlooking Cape Muroto at the very southern tip of the Muroto Peninsula. The name itself means "Cape Temple".

About 240 kilometers from the start of the pilgrimage at Ryozenji Temple in Tokushima, for those doing the pilgrimage on foot it has been a three day, 85 kilometer walk down the east coast of the peninsula from temple 23, Yakuoji. 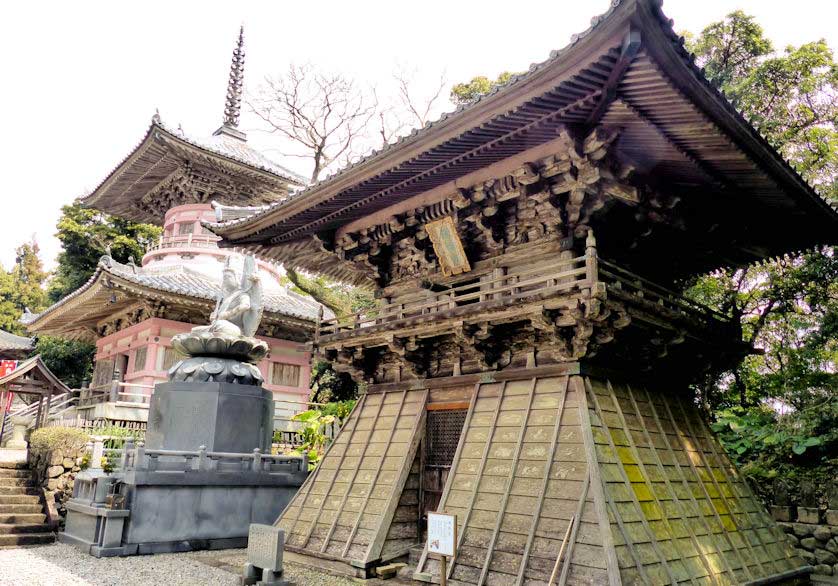 The bell tower and pagoda at Hotsumisakiji Temple, number 24 of the 88 temple Shikoku Pilgrimage known as Ohenro 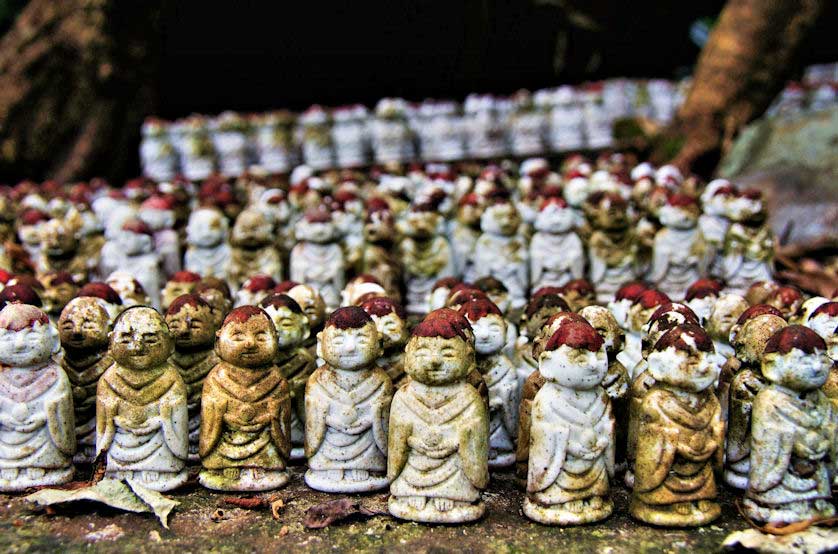 Thousands of miniature Jizo statues in the grounds of Hotsumisakiji Temple

Though it is quite a lot of work to reach, the temple is a particularly popular one, due in part to it being one of the few sites that has reliable, historical records that Kobo Daishi (Kukai), the focus of the pilgrimage, actually visited the site, but mostly due to the legend that it was here that he attained enlightenment.

He came here at age 19 after spending time attempting to reach enlightenment at Mount Tairyu, now the site of Tairyuji Temple. He entered a cave down on the seashore below where the temple now stands and vowed to remain there until he reached enlightenment (a similar vow to the historical Buddha in India), which, according to the legend, happened three years later after continuously chanting the Gumonjiho Sutra. It was at this time he took the name Kukai, the name he was known by until long after his death when he was awarded the name Kobo Daishi.

He came back here years later and carved a statue of Kokuzo Bosatsu and founded the temple. The cave, named Mikurodo, is still there, near where the footpath begins up to the temple.

The temple and grounds are not so very big, but have a nice Niomon entrance gate and main hall and Daishi Hall, as well as a small pagoda and bell tower. In the rear of the main hall is a very large rock with several depressions in it that have smaller rocks in them. This is known as a "musical" stone as if  you take any of the smaller stones and hit the large rock it gives over different musical tones rather than just a simple "clack".

A short walk from the temple will take you to the Cape Muroto Lighthouse, a smallish structure, but from where you have great views down onto the rocky cape and out into the Pacific. The temple is within the UNESCO registered Cape Muroto Global Geopark. 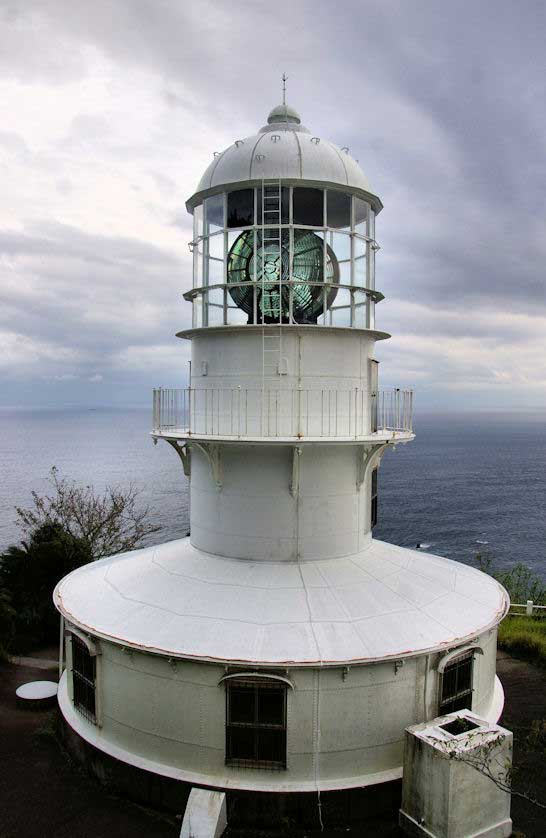 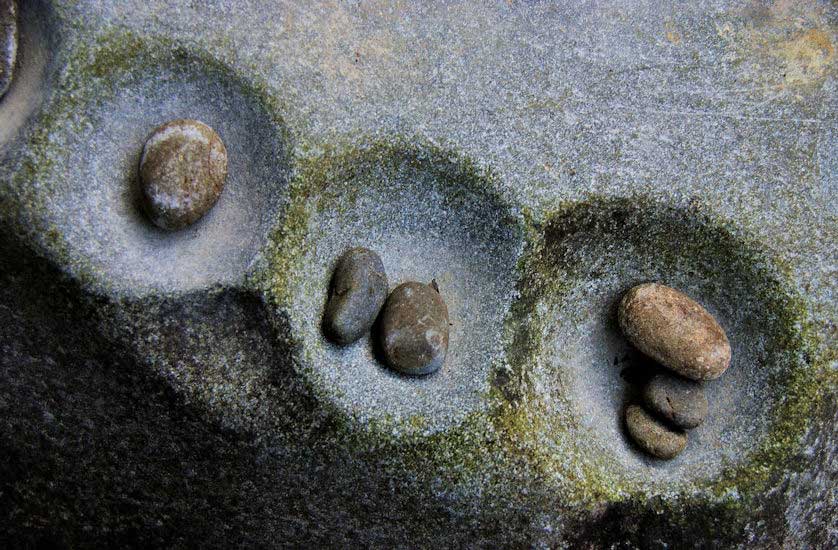 Musical Stones in the grounds of Hotsumisakiji Temple, Kochi

The only public transport to Hotsumisakiji is a bus that runs around the cape between Nahari Station on the western side of the cape where the Tosakuroshio Railway Asa Line terminates, and Kannoura Station on the eastern side of the cape where the Asakaigan Railway terminates. From the bus stop it is a 30 minute walk up a footpath or you can take a taxi up a steep, switch-backing road.

Trains from Kochi Station in Kochi take 70 minutes to Nahari on the Tosa-Kuroshio Gomen/Nahari Line and cost 1,330 yen.

There are numerous hotels and ryokan (traditional Japanese inns) around the cape area, but the temple also offers reasonably priced accommodations in it's very large shukubo.

Hotels and other places to stay in Muroto include the four star UTOCO Auberge & Spa, the ryokan Hotel Ake no Hoshi and the Murotomisakiyuhigaoka Camping Ground.