The westernmost region of Fukushima is Aizu. It is mountainous and it features large lakes, making for an impressive landscape and stunning scenery. 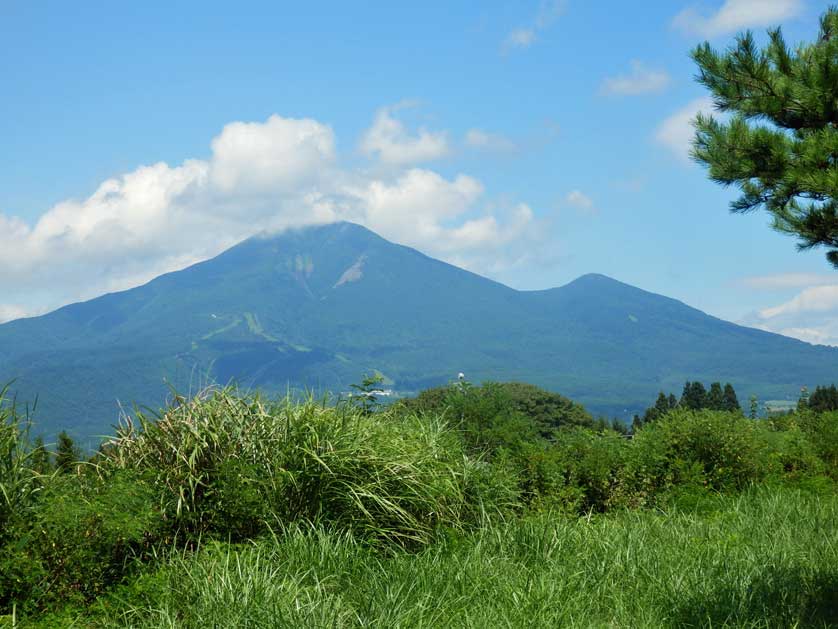 Fukushima Prefecture in Tohoku, in the northeast of Japan, consists of three different regions.

The Hamadori region stretches along the Pacific Ocean Coast. This was the region heavily affected by the March 11 2011 triple disaster - a powerful earthquake resulting in a huge tsunami which killed more than 15,000 people and caused the Fukushima Daiichi Nuclear Power Plant to explode, contaminating swaths of the region with radioactivity.

The Nakadori region encompasses the largest cities of the prefecture, Koriyama and the prefectural capital, Fukushima city.

The westernmost region of Fukushima is Aizu. It is mountainous and it features large lakes, making for an impressive landscape and stunning scenery.

The Aizu Region was not affected by the March 11 2011 disaster. 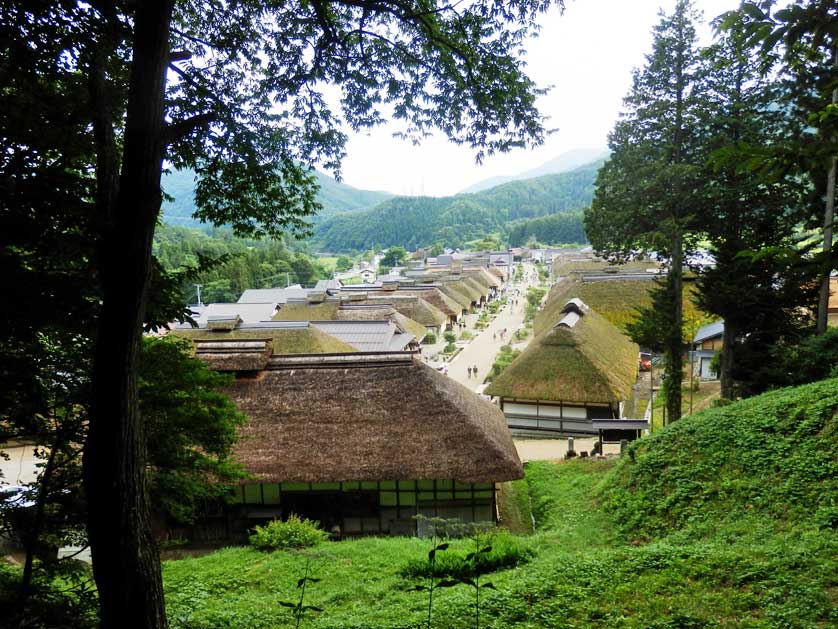 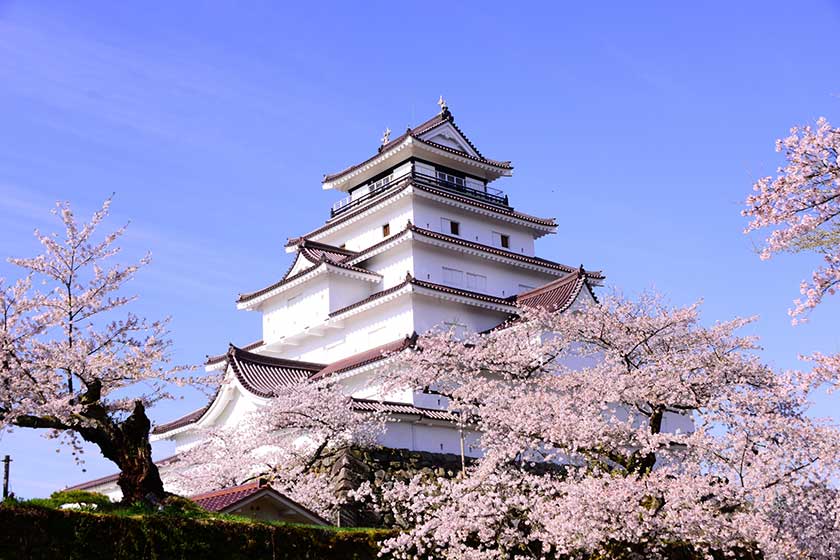 Aizuwakamatsu, famous for the historic Tsuruga Castle, the former seat of the powerful Aizu clan, is the largest city of the region and serves as the main traffic hub.

If you plan to travel to the region, take the Tohoku Shinkansen from Tokyo or Ueno Stations to Koriyama and change there to the JR Banetsu West Line for a straight run to Aizuwakamatsu.

Aizuwakamatsu with its central location makes for a good base when exploring the area. From the city, most attractions are in easy reach - especially if you drive or ride your own vehicle. 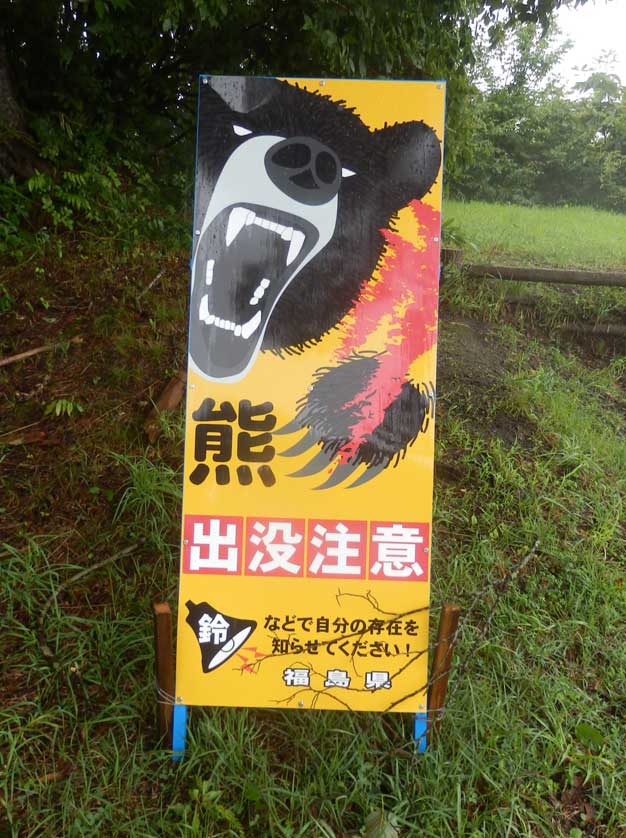 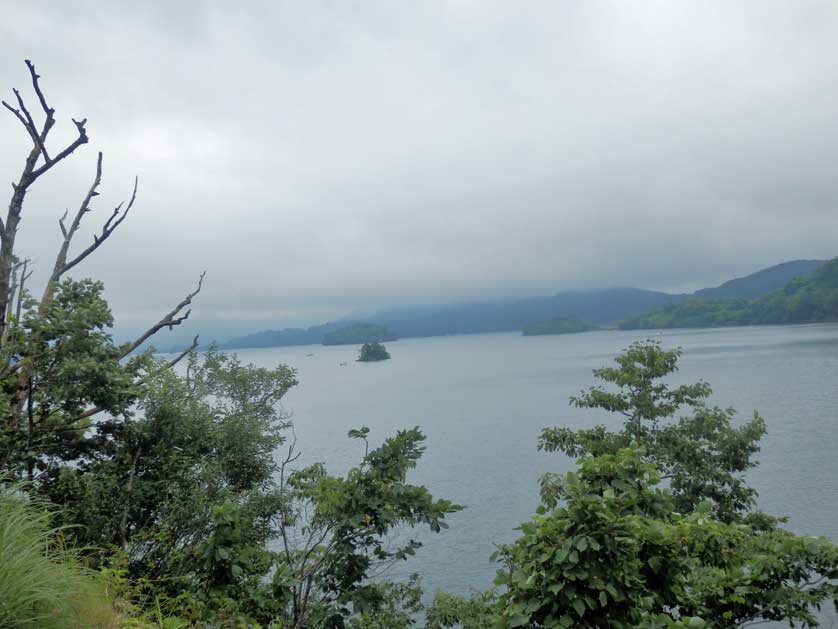 One of those attractions is Ouchi Juku, an Edo Period (1603-1868) post station town restored to its historical design, featuring a large number of thatched roof houses. Ouchi Juku is a lively place with many craft shops and soba noodle restaurants.

To get to Ouchi Juku, take an Aizu Railway train from JR Aizuwakamatsu Station towards Aizutajima. Get off at Yunokami Onsen Station. The ride takes about 35 minutes and costs 1,050 yen. Japan Rail Passes are not valid on this train. 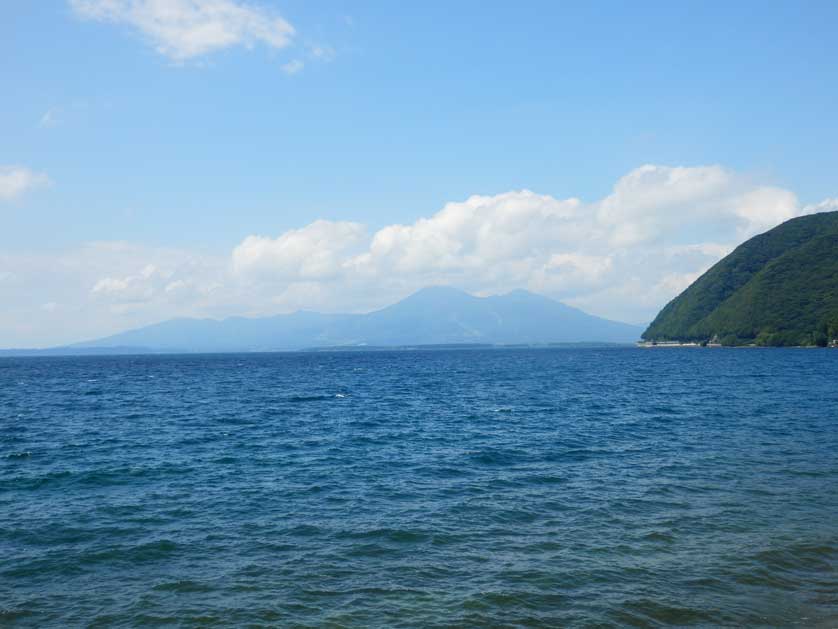 Lake Inawashiro with Mount Bandai in the background

Right to the east of Aizuwakamatsu you can spot the stand-out mountain of the area, Mount Bandai (1819 meters), a dormant volcano towering high above Lake Inawashiro, Japan's fourth-largest lake.

Mount Bandai is part of Bandai - Asahi National Park. A large eruption of Mount Bandai in 1888 gave it is current shape.

Several hiking trails lead up to the summit of Mount Bandai. The easiest trail starts at the Happodai Trailhead on the scenic Bandaisan Gold Line, a winding road connecting Bandaimachi Town just east of Aizuwakamatsu with Urabandai, following the foot of the mountain on its western side.

The hike from the Happodai Trailhead to the summit of Mount Bandai takes about two hours of more or less relaxed walking up.

To get to the Happodai Trailhead in the first place, it is best to have your own means of transportation - such as a rental car, a motorbike or, if you are the sporty type and not afraid of pedaling up steep slopes, a bicycle.

Public transportation doesn't serve the Happodai Trailhead. Getting there by taxi might be an option. For that, take a JR Banetsu West Line train to Bandaimachi Station and catch a taxi there. The ride is about 6000 yen one way.

Hitchhiking from Bandaimachi to the Happodai Trailhead might be a much cheaper alternative.

The Urabandai area north of Mount Bandai, also known as the Bandai Kogen (Bandai Highlands), is home to many lakes

Those lakes were formed as a result of the 1888 Mount Bandai eruption which sent large amounts of rocks and soil downhill, blocking small rivers and thus creating the lakes.

Because of the different minerals as well as water plants and algae in the lakes, they all have a different, unusually vivid, color, which can change day-to-day or throughout the year. 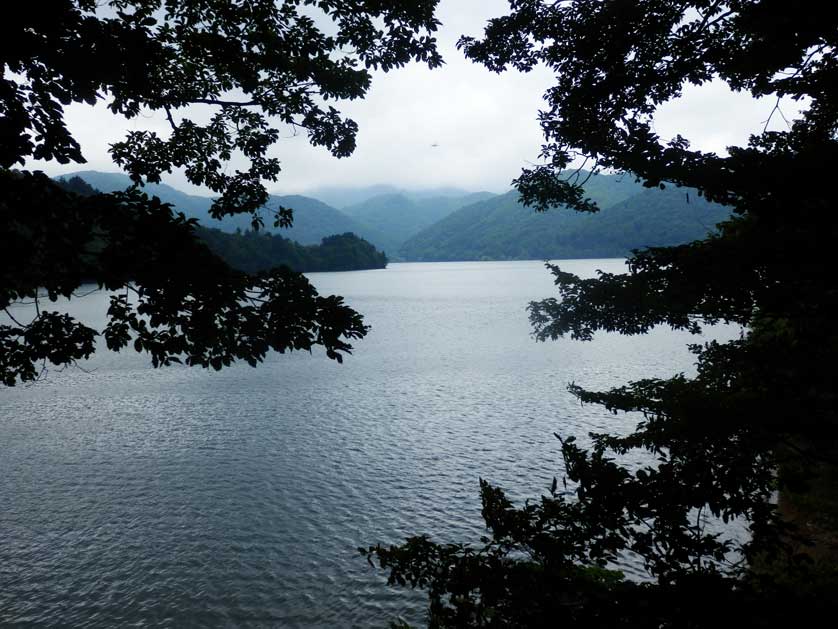 Lake Hibara, located north of the Goshikinuma ponds, is the largest lake of Urabandai. The lake, filling a valley for a length of about 5 km, was also the result of the 1888 Mount Bandai eruption.

Rocks and other debris formed a dam which caused the valley to fill with water. The village of Hibara, after which the lake is named, was submerged in the process. Its remains are still at the bottom of the lake.

Lake Hibara is surrounded be forested mountains and dotted with numerous tiny islands.

The road circling the lake is very scenic and especially popular during the autumn color season.

The lake itself draws a number of motorboat enthusiasts who travel up from as far away as Tokyo with their boats on a trailer as the license plates on their cars indicate.

They are, however, not numerous enough to cause much noise and disruption to the generally very quiet lake.

Rowing boats can be rented at various rental stations along the lake's shores. 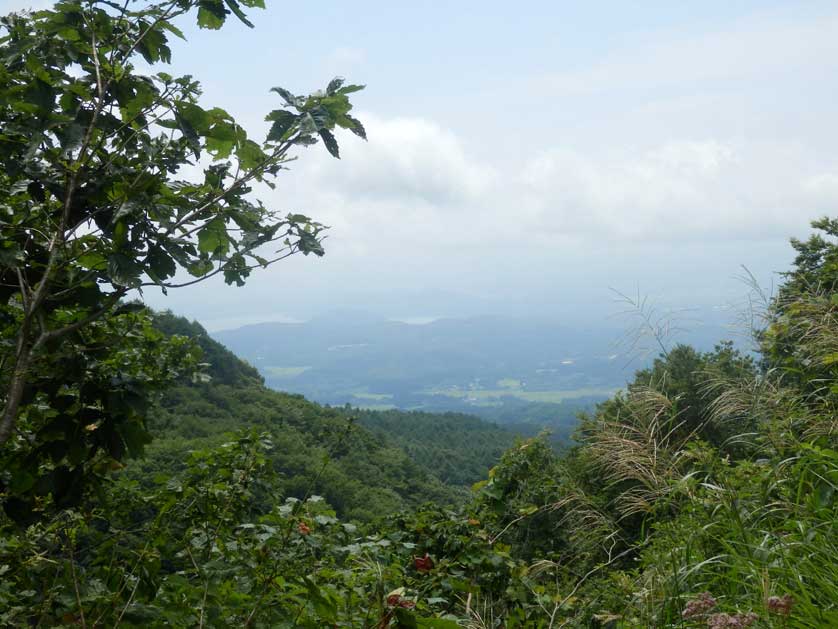 It used to be a toll road but the road toll collection was stopped in an effort to promote tourism to the area.

The road features many viewpoints, especially towards Lake Inawashiro to the south.

There are also parking lots for several waterfalls and other attractions along the road.

Mount Bandai often serves as a sort of weather divide. The Urabandai area north of Mount Bandai can easily be deep in clouds, fog or rain while the sun is all shining on Lake Inawashiro to the south. 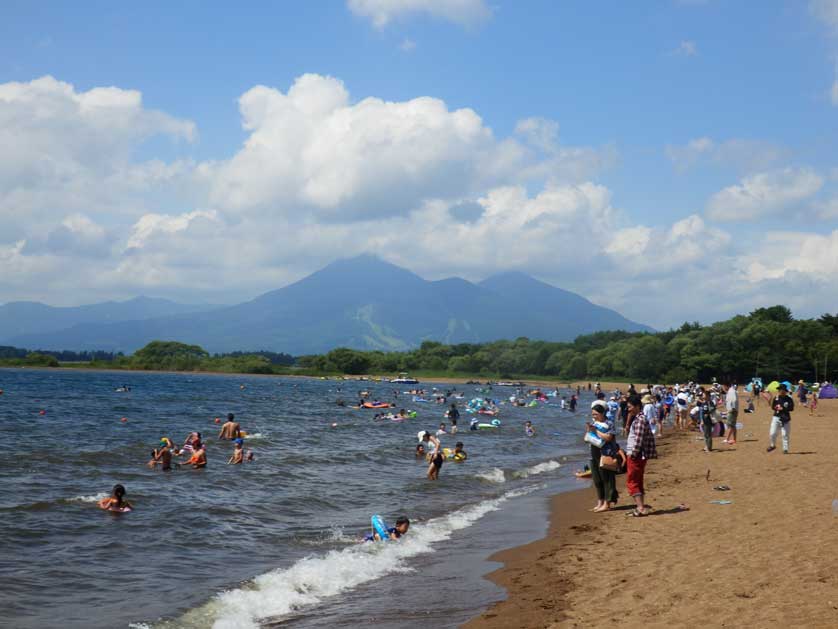 Swimming beach at Lake Inawashiro with Mount Bandai in the background

Those views are especially impressing when Mount Bandai is covered with snow.

In summer, Lake Inawashiro is very popular as a leisure spot featuring many beaches for swimming.

Then change to the JR Banetsu West Line to JR Aizuwakamatsu Station (80 minutes).

Inawashiro Town and Bandai Town have their own stations on the Banetsu line, shortly before JR Aizuwakamatsu. 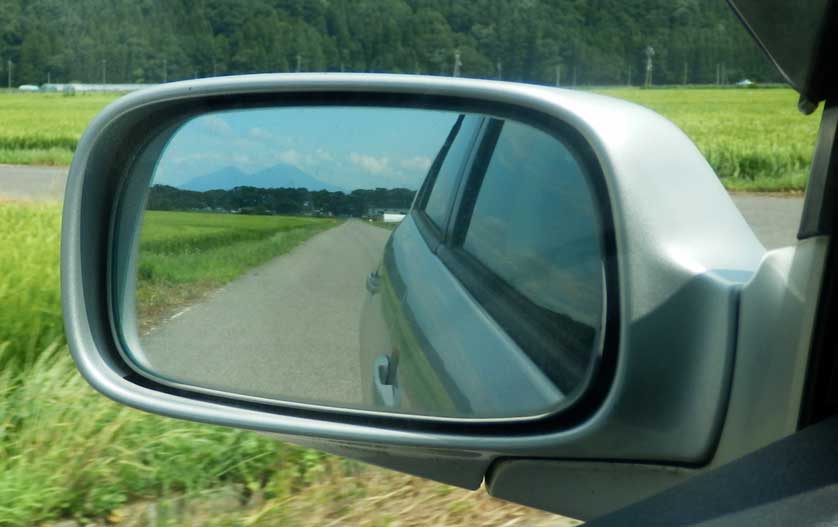 Mount Bandai seen in the rearview mirror of a car

Yunokami Onsen has many hot spring bath hotels and ryokan.

In winter, the southern slopes of Mount Bandai are very popular for skiing. Some of the ski lodges and hotels offer steep discounts outside the skiing season.

The Inawashiro Kanko Hotel in Inawashiro Town east of Aizuwakamatsu, for example, is one of them.

Try to get a room with windows towards the south. They offer breathtaking views over Lake Inawashiro.

To easily reach the hotel and to move from there comfortably around the area, you need your own vehicle, though.

Located in the Tohoku region in the north of Japan's main island and stretching all around Mount Bandai, Bandai Asahi National Park will delight nature lovers. And this, in all seasons!

"The important thing is not the destination, but the trip itself".

Okuaizu is located in the southwest of Fukushima prefecture, bordering those of Niigata, Gunma and Tochigi.