Sado Kinzan: read a guide to the Sado Gold Mine and Museum in Aikawa, Sado-ga-shima with tours of the Edo & Meiji Period mine shafts. 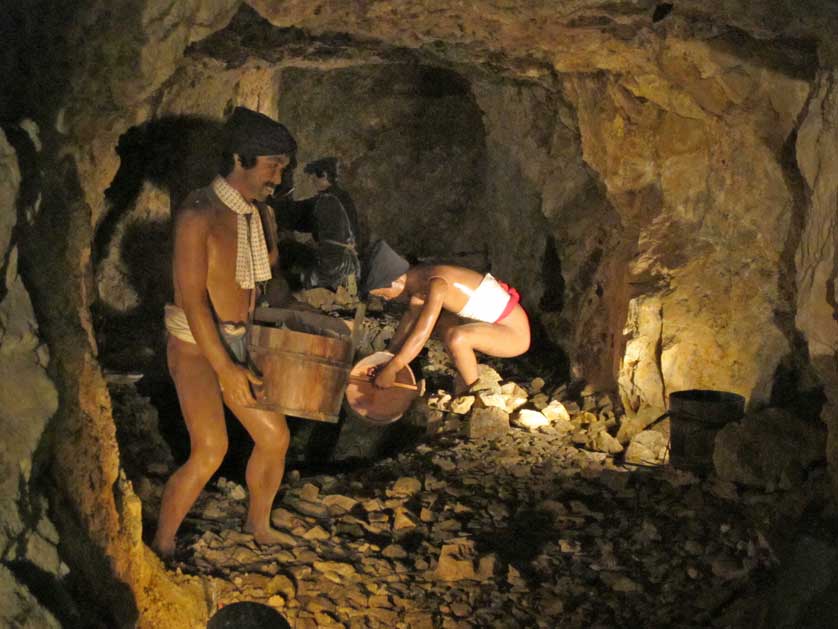 Drainage workers toiling away in the murky and dangerous depths of Sado Gold Mine, Niigata Prefecture

Sado Gold Mine or Sado Kinzan is Sado Island's most important historical site and is being actively promoted to be listed as a UNESCO World Heritage site, similar to Iwami Ginzan silver mine in Shimane Prefecture. Sado Gold Mine was Japan's largest gold mine and was in operation from 1601, when gold was first discovered for 388 years until 1989, when mining operations ceased at the site. In total, 15,000,000 tons of ore were mined at Sado Kinzan producing 78 tons of gold and 2,300 tons of silver. Alluvial gold had already been found on Sado in small quantities in the Heian Period (794-1185) and silver was mined at the Tsurushi and Niibo silver mines in the Warring States period of the 15th and 16th centuries. 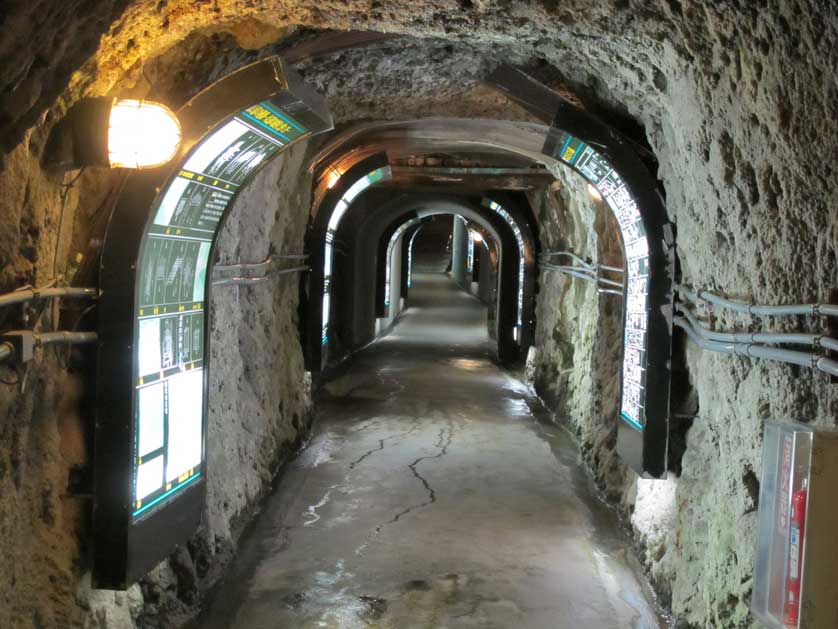 A view of the Edo Period tunnels, Sado Gold Mine 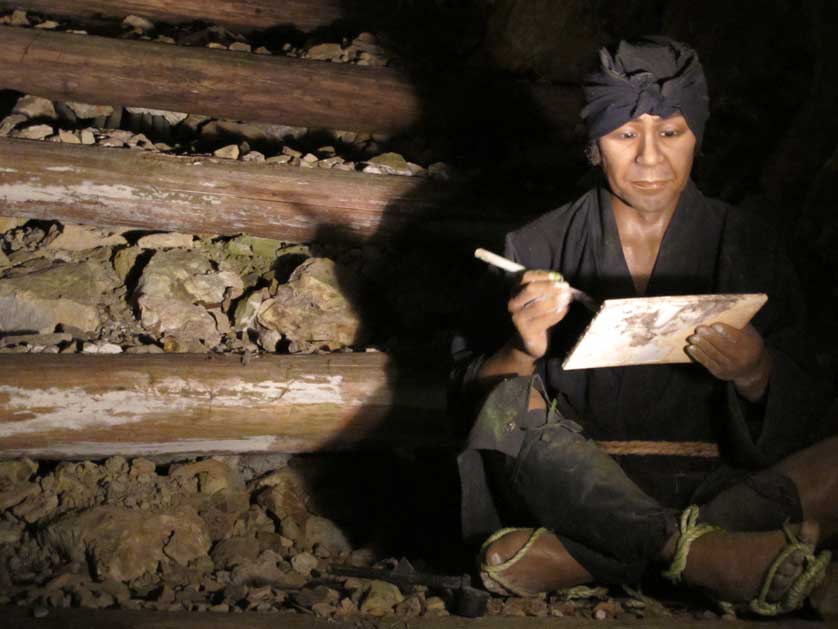 A mine worker, Sado Gold Mine, Sado Island, Niigata Prefecture

During the Edo Period (1603-1867), Sado Gold Mine was under the direct control of the Tokugawa shogunate and the massive amounts of gold and silver mined here helped finance the Tokugawa regime. The town of Aikawa, near where the gold was discovered, grew in size to a large settlement of around 100,000 people as miners, merchants, shop-keepers, entertainers and prostitutes flocked to the area. Some of the men who worked in the mines were "unregistered" (mushukunin) - a euphemism for Japanese outcastes, around 1800 of whom were rounded up in Edo, Osaka and Nagasaki and forced to labor for a period of 10 years as drainage workers in the mines.

Conditions in the pits were often grim, with men and sometimes young children working in cramped and dangerous conditions. Some technological advances improved conditions somewhat, including the use of the Archimedes' Screw (suishorin in Japanese) from 1658 onwards to pump water from the increasingly deep mine tunnels (to a depth of 800m) up to the surface, Chinese Bellows to pump fresh air down to the mining shafts and drainage channels dug to carry away excess water. Workers engaged in pumping and general drainage work were known as toibiki ninpu and mizukae-ninsoku respectively. The dug-out shafts were timbered by carpenters known as yamadome-daiku to prevent cave-ins. The miners themselves were well paid and worked only 4-hour shifts. These men (kanahori-daiku) , who often died young from respiratory diseases, were the main patrons of Aikawa's entertainment area where they indulged their love of sake, women, music and gambling.

In all there are estimated to be around 400 km of mining tunnels at Sado Kinzan, often the pits were named after the mining engineers (yamashi) who developed them, thus the Sodayu shaft named after a man named Sodayu is one of the most important Edo Period excavations.

The whole Edo period mining operation was administered by the Sado Bugyosho, an office run by a Tokugawa appointed magistrate, which has been carefully restored in its location near the mine. Gold coins, known as koban, were produced near the Sado Bugyosho until production was shifted to Edo (present-day Tokyo).

One lasting physical memento of Sado Ginzan is the Doyu-no-wareto - an outcrop of rock that has been cut away over the centuries by human hands. 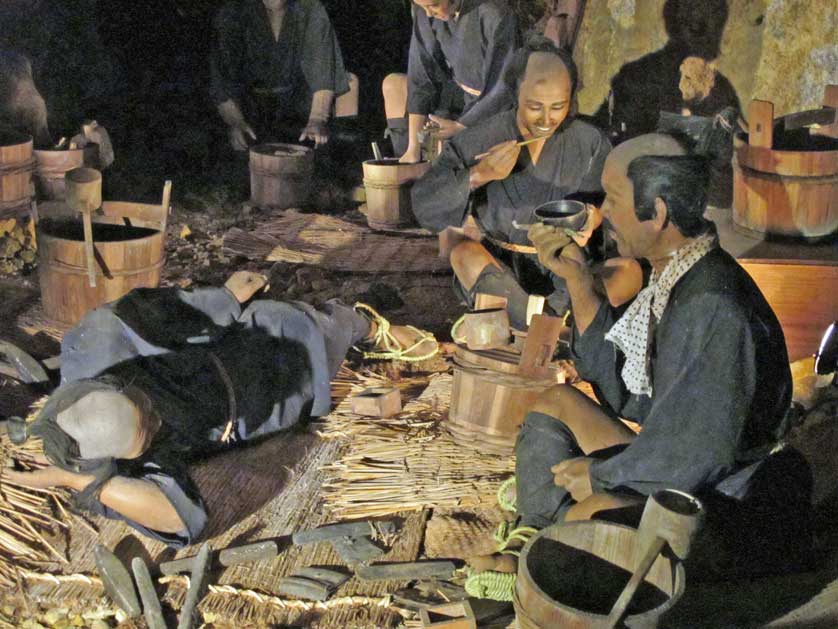 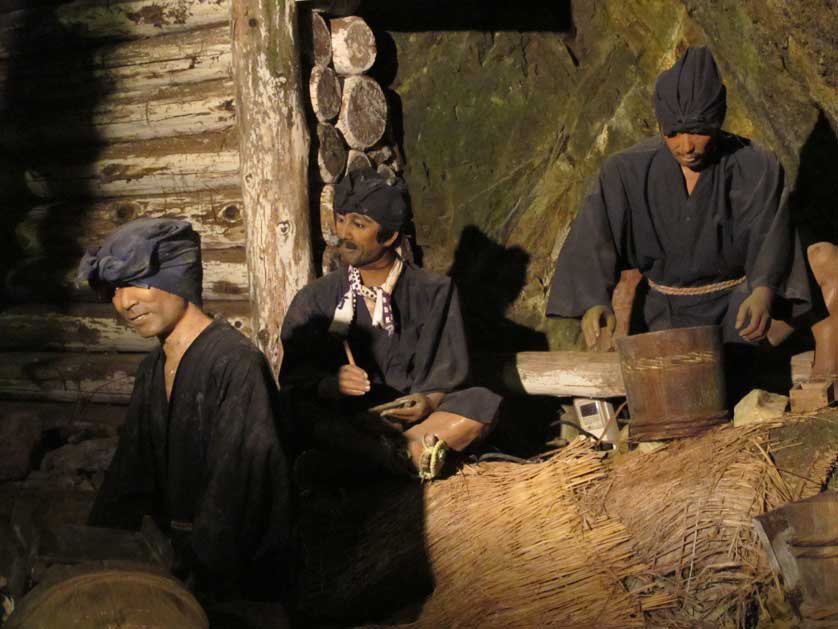 Edo Period mine workers in Sado Gold Mine, Niigata Prefecture 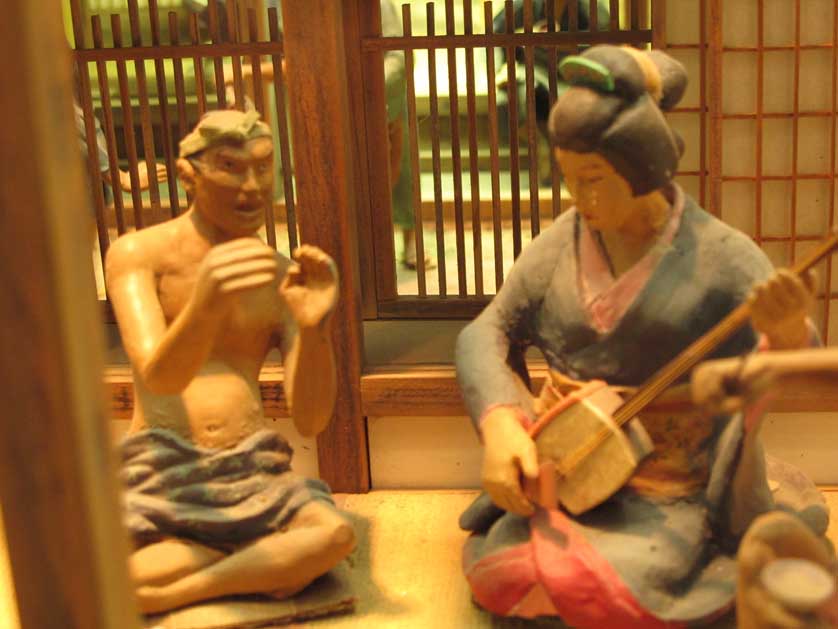 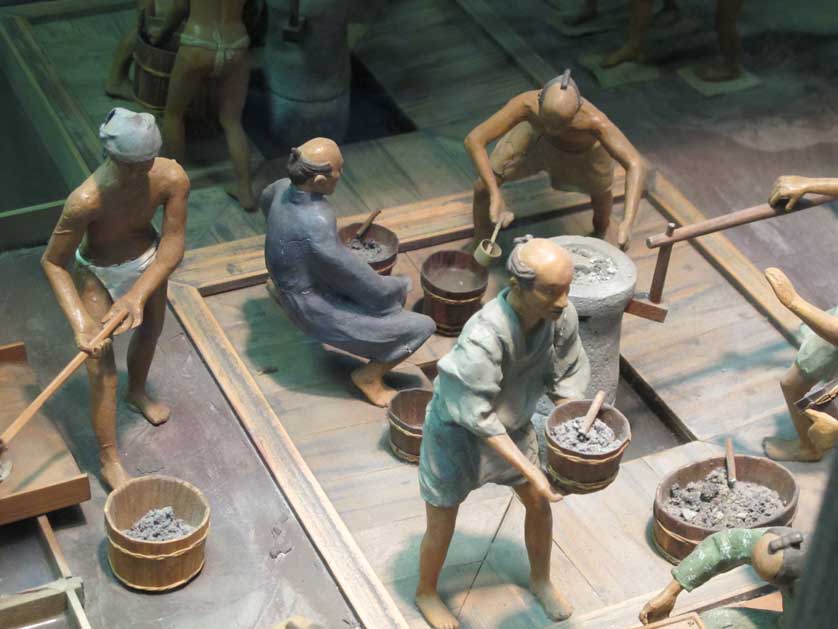 Mannequins demonstrating the production of gold at the Sado Gold Mine Museum, Sado-ga-shima, Niigata

Following the collapse of the Tokugawa regime in 1867, ownership of the mine by taken over by the new Meiji authorities. With increased Westernization in Japan as a whole, modern European mining techniques were introduced at Sado Kinzan including the construction of the Odate Shaft, the country's first western style mine shaft completed under the guidance of a German mining engineer. In 1896 Sado Kinzan was sold off by the Meiji government to the Mitsubishi Corporation along with Ikuno silver mine in Hyogo Prefecture and the Osaka Copper Refinery.

Modern developments at Sado Ginzan sped up with the purchase of the mine by Mitsubishi until the mine's closure in 1989. A mine hospital was completed in 1904, the Kitazawa coal generator began operation in 1908 to provide power to the site and in 1938 the Kitazawa flotation plant was opened, at the time, the largest gold ore concentrator in East Asia. The ruins of these buildings are now preserved opposite the Sado Bugyosho in Aikawa town. 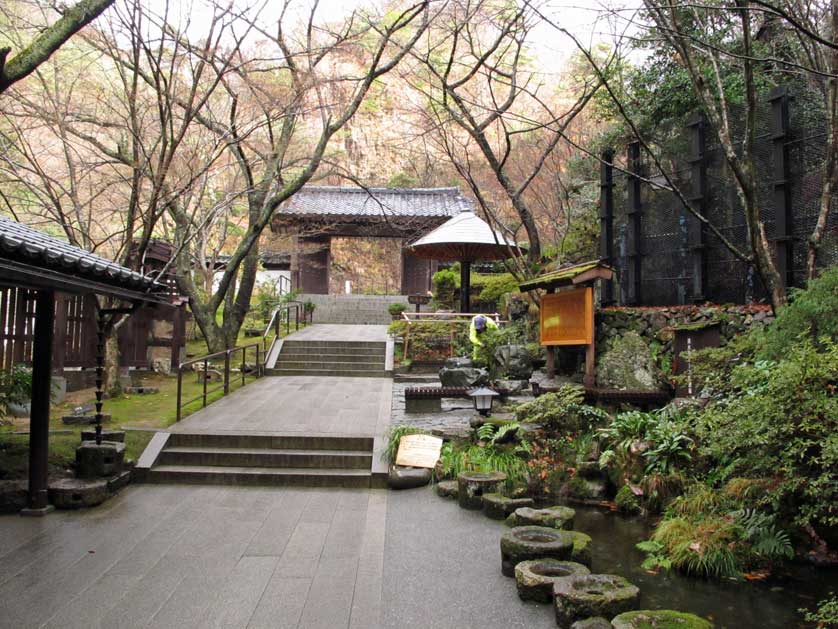 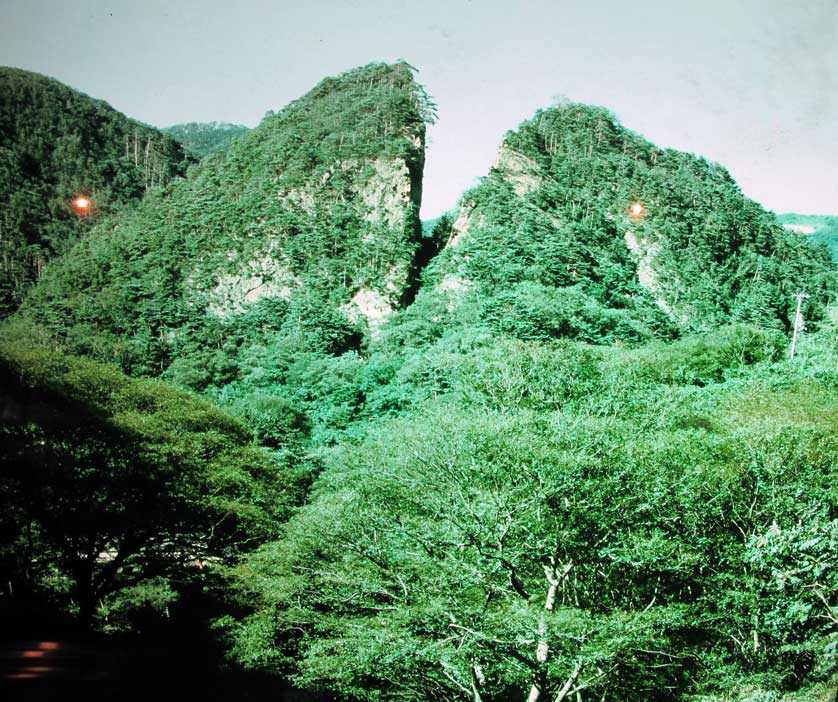 Visitors to Sado Gold Mine today have the choice of taking one or both tours of the mine shafts. One tour is of the Edo Period shafts and is known as the "Sohdayukoh" course. Mechanized robots in the shape of Edo period miners operate authentic machinery to recreate the atmosphere, colors and sounds of the mines. Information on each exhibit is given in both Japanese and English and before you exit the shaft you can see a robotic recreation of a Yawaragi Festival - performed by a Shinto priest and musicians to celebrate the discovery of a new vein of ore. 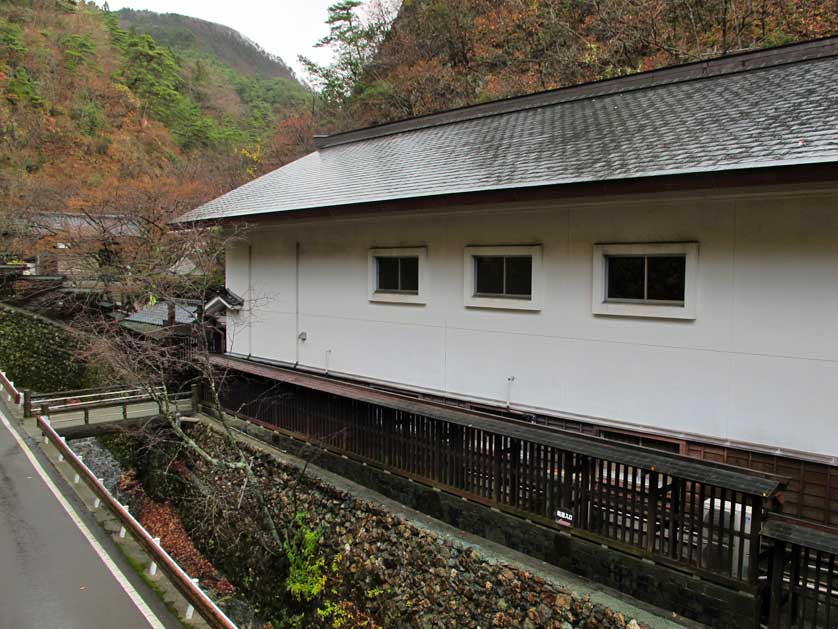 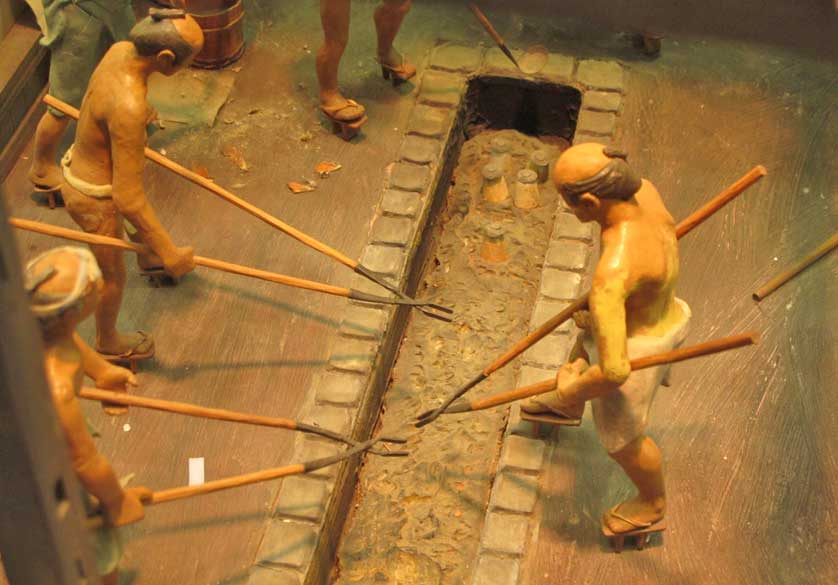 The "Dohyukoh" course is the part of Sado Kinzan exploited in the Meiji Period and the shafts are wider and taller than the "Sohdayukoh" course. A highlight of the Dohyukoh course is the original mining machinery maintenance shop built in 1938 and used until 1989. Visitors can exit from the tour into Takatoh Park, named after the mine's first administrator of the Meiji-era, Takatoh Oshima, which affords a wonderful view of the the Dohyu-no-wareto open pit.

Both tours finish at the Sado Gold Mine Museum, which is an excellent historical museum using scale models and original artifacts to represent the life and times of the mines, the Edo period miners and Aikawa town. The museum details how the gold was made into koban coins and general scientific information about gold and gold mining technology.

The Sado Gold Mine Museum also includes a souvenir shop, restaurant and a pretty garden. Visitors can buy gold jewelry as well as gold-flaked sweets and Japanese tea with gold-leaf.

Located in the Tohoku region in the north of Japan's main island and stretching all around Mount Bandai, Bandai Asahi National Park will delight nature lovers. And this, in all seasons!

"The important thing is not the destination, but the trip itself".

Okuaizu is located in the southwest of Fukushima prefecture, bordering those of Niigata, Gunma and Tochigi.