The Okuizumo Orochi train offers a relaxed and scenic train ride through remote mountains and valleys in an open car through Shimane and Hiroshima prefectures.

The Okuizumo Orochi train offers a relaxed and scenic train ride through remote mountains and valleys in an open car. 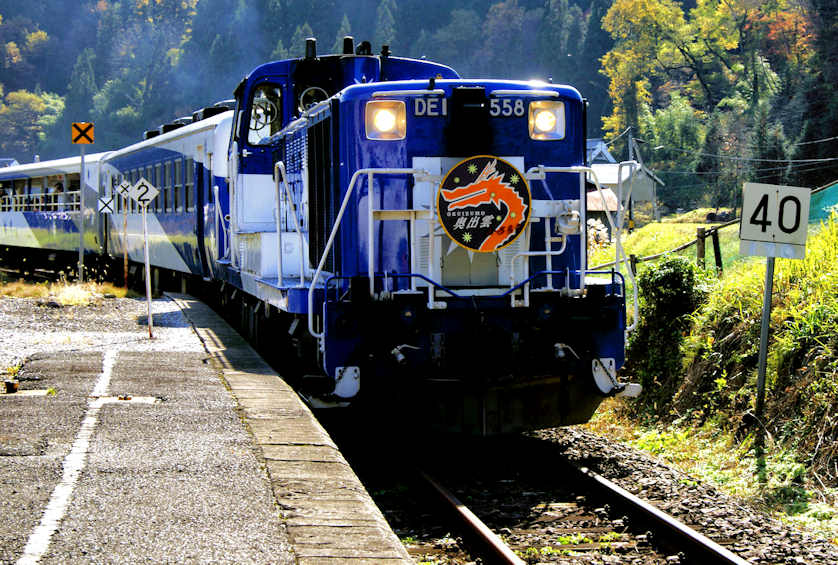 The Orochi Train at Miinohara Station, the highest station on the JR West network at 727 meters above sea level 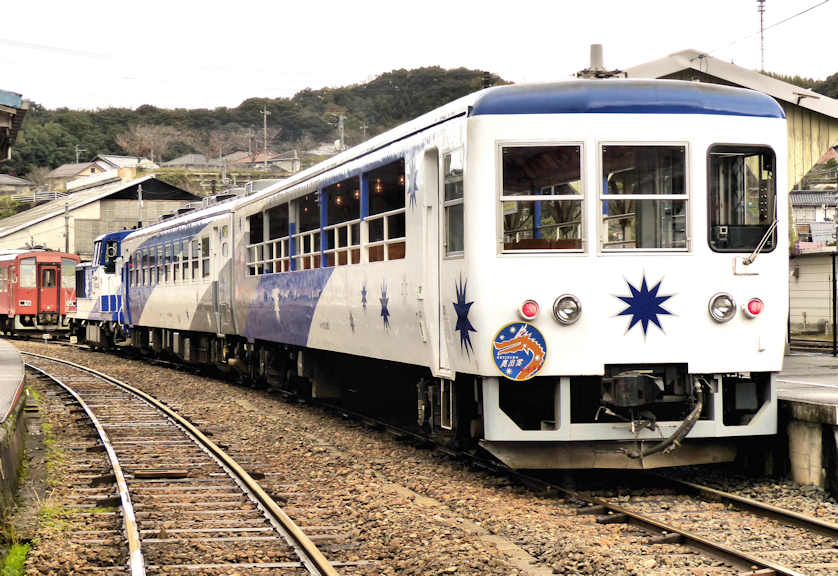 The JR Kisuki Line begins at Shinji Station (roughly midway between Izumo and Matsue) on the main JR Sanin Line on the shore of Lake Shinji, the 7th largest lake in Japan.

Starting at almost sea level the Kisuki Line heads south through the remote and mysterious Oku Izumo region climbing slowly until it reaches more than 700 meters above sea level and then joins up with the Geibi Line at Bingo Ochiai, from where trains run all the way down to Hiroshima via Miyoshi or to Niimi in the mountains of Okayama.

It's a journey of only 80 kilometers, but takes three hours and fifteen minutes, about the same time as the shinkansen will whisk you from Tokyo to Okayama, and passes through a couple of small towns, but mostly winds up narrow valleys with farmhouses becoming less and less frequent.

It is very scenic on any train, but the best way to travel the route is by the special Okuizumo Orochi Train. It runs on Fridays, Saturdays, Sundays and national holidays from April until November, but also on weekdays during Golden Week, summer holidays and the autumn leaves viewing season.

The Okuizumo Orochi Train starts and returns to Kisuki Station, but you can buy a ticket for any section of the journey as it stops at every station. There are only two carriages, and one of them is open with no windows so you can really feel the wind and smell the countryside. Reservations are almost certainly needed, but the surprising thing is that you get a reservation for two seats, one in the open car and the corresponding seat in the enclosed, regular carriage, so you can switch back and forth and stay comfortable. 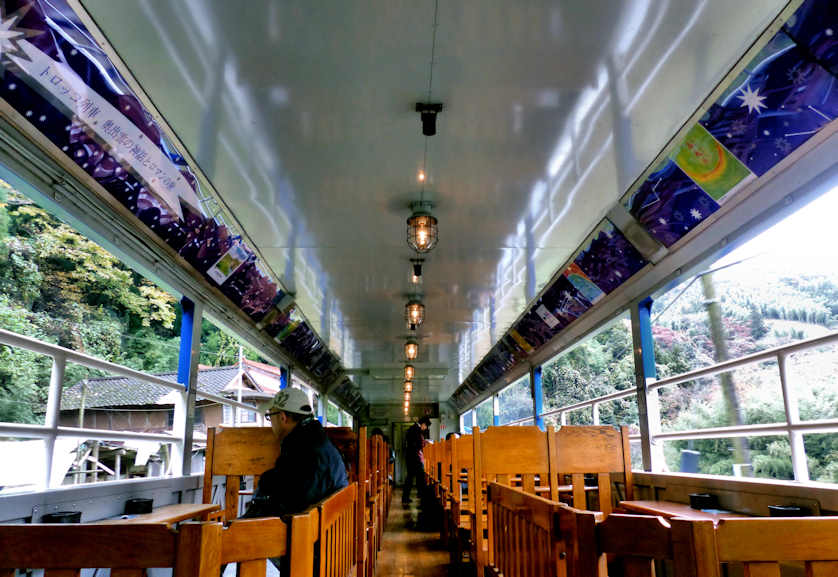 Interior of the open carriage 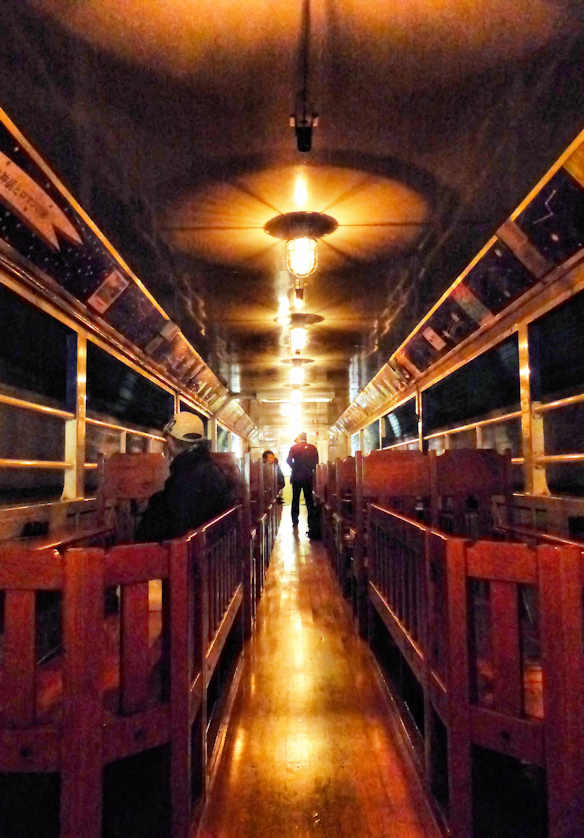 Illuminated interior of the open carriage during a tunnel

The train's name comes from a local myth found in the ancient chronicles, the story of Yamata no Orochi, a fearsome serpent with eight heads and eight bodies that demanded sacrifices of young maidens.

Eventually defeated by the hero Susano O no Mikoto, the eight-bodied serpent is believed to be based on the eight tributaries of the Hikawa River that when swollen with rain caused devastation downstream, and it is along this river system that the train follows. As the train passes through long tunnels the carriage lighting dims and illuminated serpents appear in the carriage.

As the valley narrows, the train slows and the steep mountains ahead seem impenetrable. At Izumo-Sakane Station the train stops for ten minutes. Many people get off and sample the water from a sacred spring just outside the station, while the train driver heads to the back of the train because here the switch back begins.

To get up this steep section the train backs up a slope, stops, then goes forward up another slope and then executes a slow 190 degree curve followed by a 170 degree curve in the opposite direction before arriving at Miinohara Station, the highest station in the JR West Japan network. 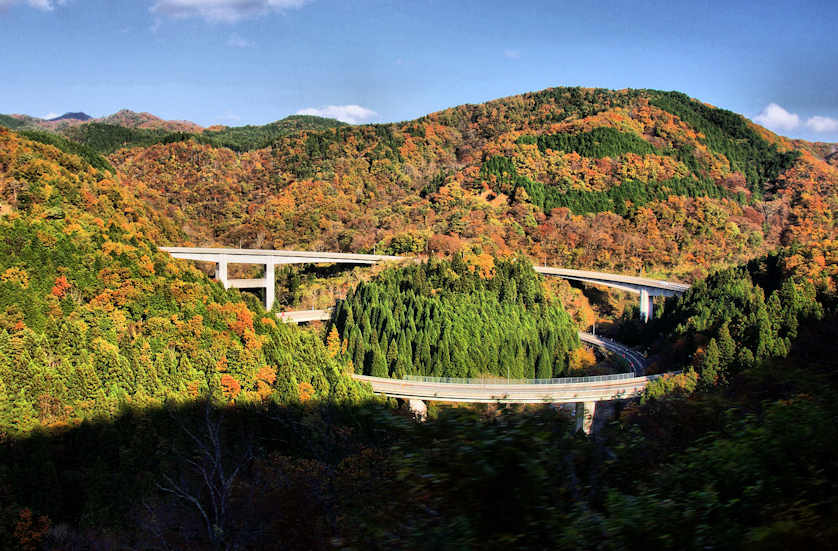 Just before reaching the station the train slows and stops to allow the passengers a view of the Orochi Loop, a corkscrew-shaped road that brings vehicular traffic up and down the mountain.

Miinhohara and the next couple of stations are set among ski slopes with those of Mount Hiba, 1,299 meters, being the most impressive. At Bingo-Ochiai Station the train stops for a few minutes before beginning the return journey down to Kisuki.

Seat reservations are mandatory, but the train can be boarded and alighted from at any station along the route. Regular trains also travel the same route but without the open carriage. Kisuki Station is easily reachable by train from either Izumo city or Matsue, both in Shimane Prefecture.

A local ekiben (station bento lunch) can be purchased at various stations along the route and includes local Shimane specialties such as Japanese beef (wagyu).

The Japan Rail Pass can be used on the Okuizumo Orochi train.