Lake Shidaka (Shitakako in Japanese) is a small mountain lake about halfway between Beppu and Yufuin.

Lake Shitaka (also spelled Lake Shidaka) is a small mountain lake in Oita prefecture about halfway between Beppu and Yufuin and it is part of the Aso Kuju National Park.

Lake Shitaka (Shitakako in Japanese) is a popular destination for day trippers who like to do the approximately 2km walk around the lake, rent a paddle boat and cruise the water pedaling a boat resembling a giant swan (or a cartoon character) with their feet or for people who simply want to feed the abundant carp. 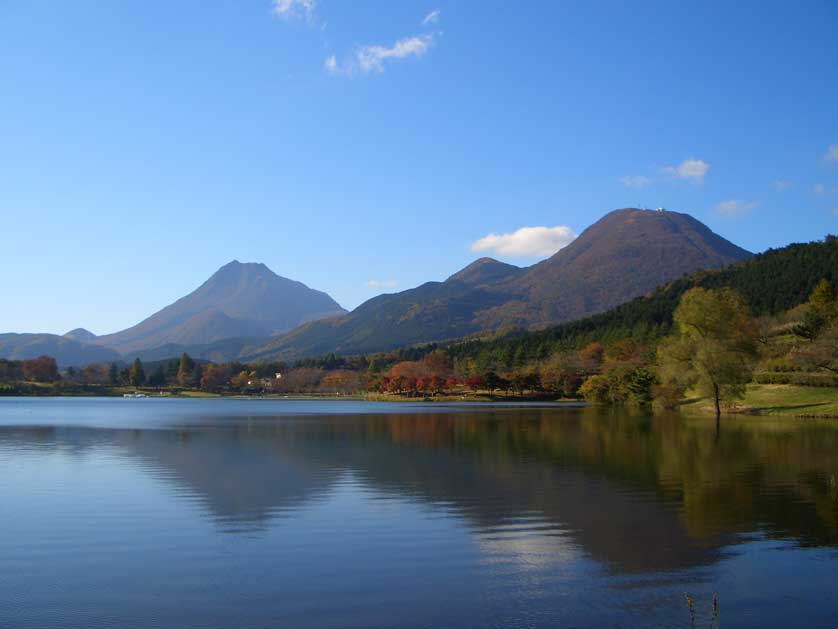 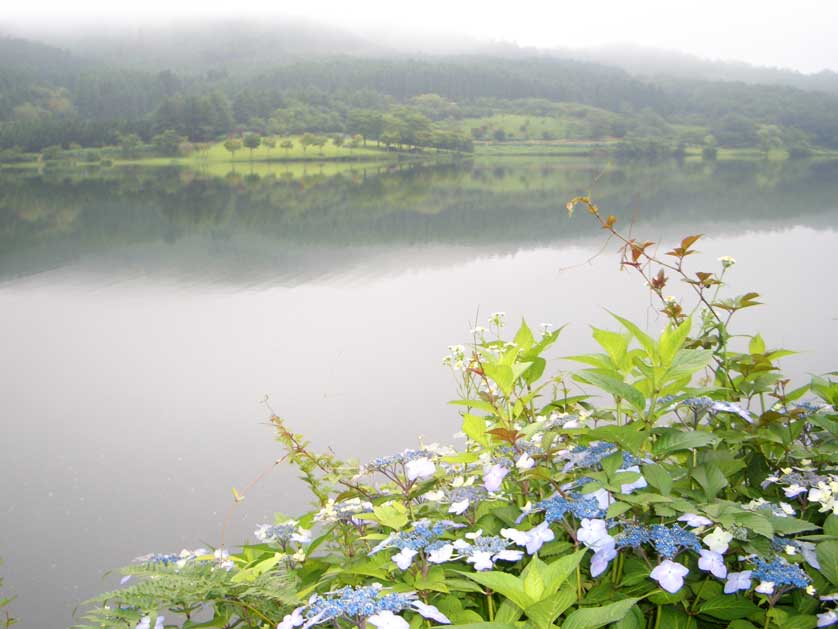 The landscape surrounding the lake is beautiful with both Mount Tsurumi (Tsurumidake) and Mount Yufu (Yufudake) in full view from the eastern end of the lake. Forests grow close to the waterside on the southern shore, on the other shores light orchards and meadows dominate. In the heat of summer, the air up here (elevation about 600m) is fresh and cool.

A few robust tables with benches attached and overlooking the lake make for easy picnicking, a small rest house at the entrance to the lake caters to the basic needs of the day trippers. Fried sausages, beer and other light refreshments are sold. The rest house closes at 5pm.

To go camping at the lake however is a very different experience. 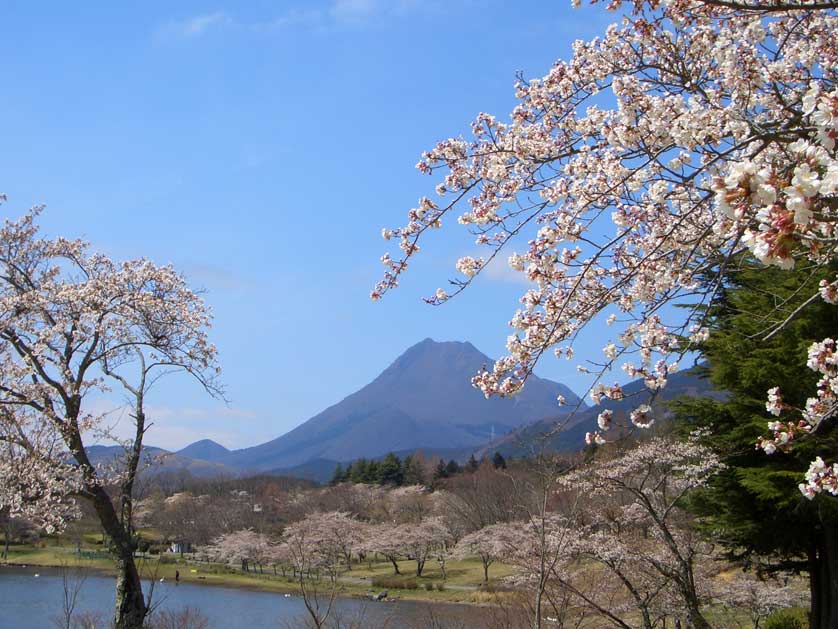 First of all, make sure to avoid going in major holiday seasons like O-Bon in August and Silver Week in September. It might get crowded in those times.

Outside those few holiday seasons you might be almost alone on the lake, or at least in your chosen area. It's that experience I write about here.

For your camping spot, you don't need to make a reservation but you need to arrive at the small campground administration building close to the Shitaka rest house before 5pm. There you pay your camping fee (well under 1000 yen) and you are allowed to open the gate and to drive inside.

The public facilities of the campground are close to the gate. The showers, the toilets, the places to rinse dishes and the like. All of them are very basic, so don't expect any luxury. There are also permanently installed barbecue sets which can be rented. Most campers prefer to stay in close vicinity.

However, the whole north and east side of the lake is part of the campground and you can choose freely where you want to put up your tent.

The lake water is not of drinkable quality but there are small drinking water faucets rising out of the ground every couple of hundred meters.

You can drive to the far eastern end of the lake and that's perhaps its most impressive spot. It offers the best view to the two dominating mountains of the area and it is most likely the most quiet place. On the other hand, it is the furthest away from the public facilities.

Just drive slowly, explore the area and decide on a spot you like. Set up your tent, your dinner table and start to enjoy the evening.

The sun goes down early in Kyushu, it's dark at about 7.30pm even on the longest days in summer. Only a few lights glimmer at the public facilities across the lake and aside from the cicadas, there will be hardly any sound.

It wasn't always this way. 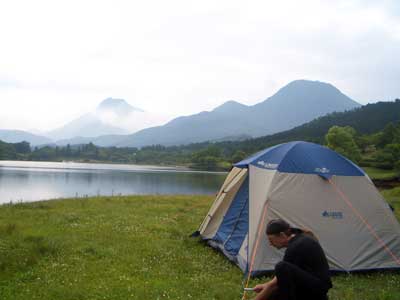 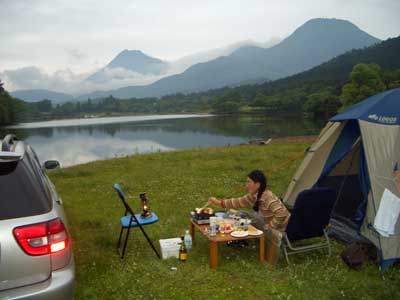 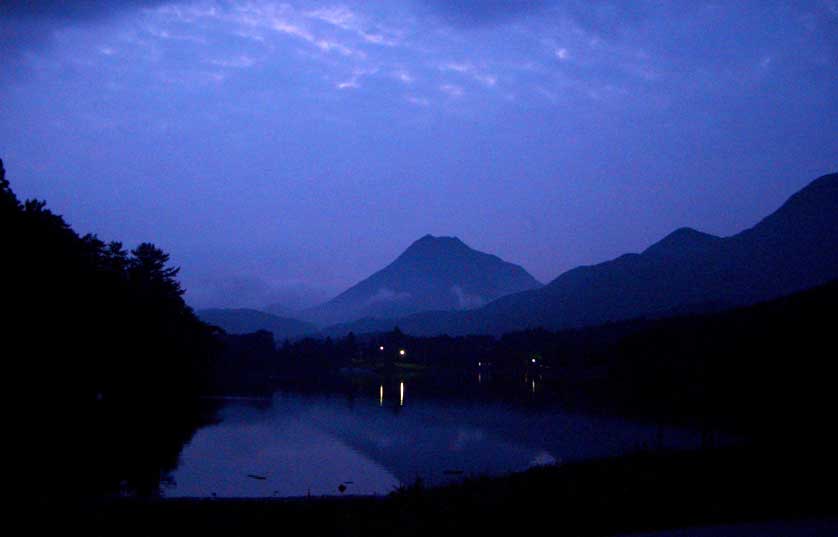 If you are on the far eastern end of the lake, you will notice an overgrown but perfectly round spot close to the water about 20 meters in diameter. In another time, that was an ice skating rink.

In the 1960's, Lake Shitaka had been transformed into an amusement park. A ropeway (gondola lift) directly connected the lake to the today still existing Rakutenchi Amusement Park overlooking Beppu. Called Shitaka Utopia, the lake amusement park was expected to become a major tourist draw. A lot of noisy attractions were built and the park was supposed to attract millions. It didn't and went out of business in the 1990's. The amusement park facilities were soon demolished and the lake was allowed to return to its natural state.

The Shitaka rest house occasionally displays photos featuring the frenzy of those days.

One night per person: 320 yen (free for children under 3 years old)

No charge for the tent

By bus: Kamenoi Buses no. 34 and no. 37 from Beppu Station West Exit or from Yufuin. Get off at Shitakako Lakeside bus stop (志高湖畔)

From Yufuin, drive Highway 11 towards Beppu, turn right at the (only) gas station between the two cities. It is located about half-way between the cities.

Oita is 3 hours by train from Miyazaki and Kagoshima, 2 hours from Miyazaki. The quickest way from Kagoshima to Yufuin is to take the Kyushu Shinkansen to Kurume (78 minutes) and then change to the luxury Yufuin no Mori express to Yufuin (1 hour, 30 minutes).

From Kumamoto ride the Kyushu Shinkansen to Kurume (30 minutes) and then change to a Limited Express to Yufuin.

From Nagasaki take the Kamome Limited Express to Tosu and change (1 hour, 30 minutes).

There are frequent buses to Beppu from Yufuin and buses to Aso and Kumamoto in season. Check at the tourist office. Highway buses connect Yufuin with Fukuoka. 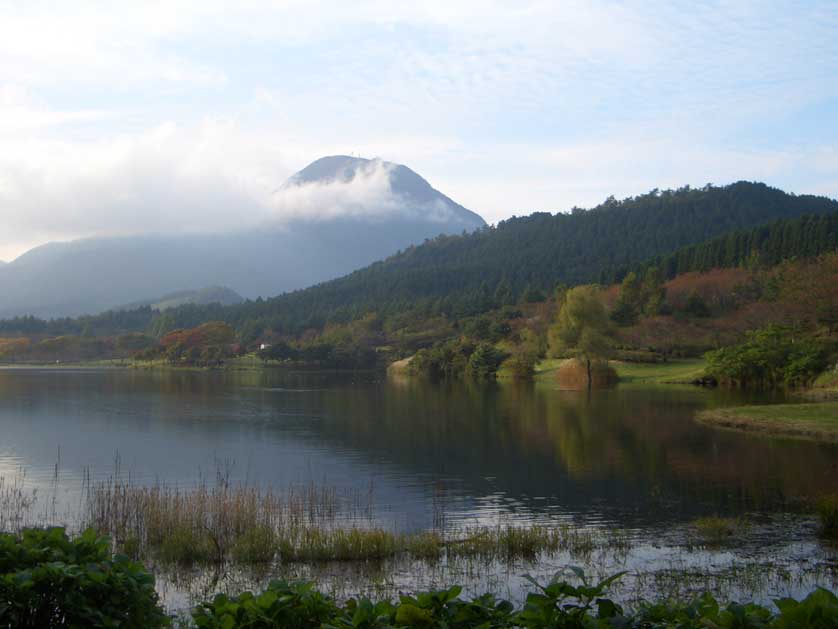