In Edo times (1603 - 1868), two major roads connected Edo (today's Tokyo), then the seat of the Tokugawa Shogunate and thus the de facto capital of Japan with Kyoto, the residence of the Emperor and seat of the Imperial Court. 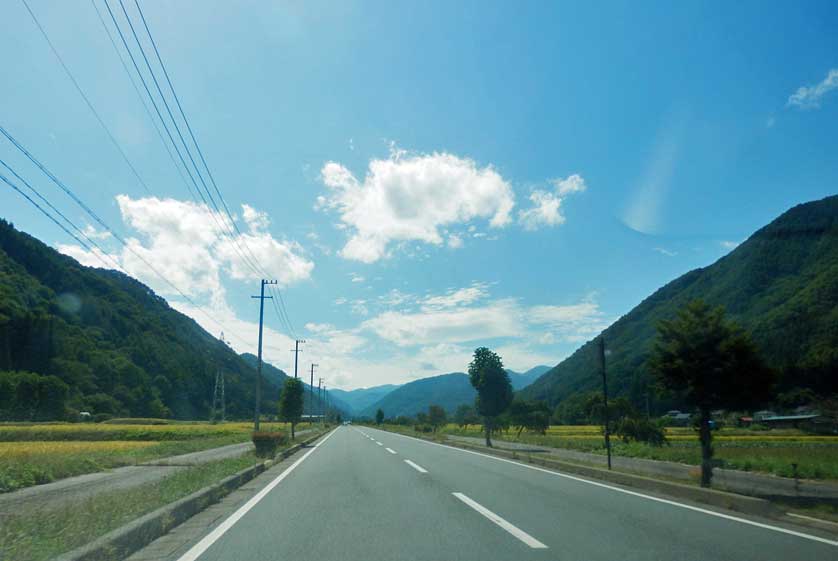 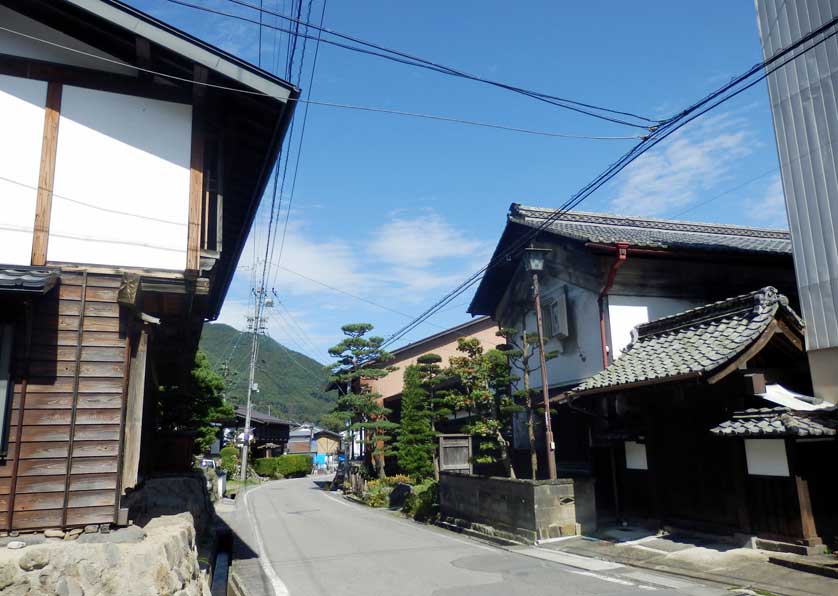 The shorter of those two roads was the Tokaido, largely following the Pacific coastline. The current Tokaido Expressway and the Tokaido Shinkansen connecting the Kanto (Tokyo area) and Kansai (Osaka / Kyoto / Kobe) regions largely follow this route.

The second road was the Nakasendo. It went through the mountains inland, it was longer and more cumbersome. Travelers had to cross various steep mountain passes.

Still, the Nakasendo was considered the safer route. Travel on the Tokaido, being close to the sea, was hampered by wide and dangerous rivers to cross.

Especially the female members of the aristocratic families in western Japan preferred the Nakasendo mountain road when on their way to Edo. Servants carried them in kago litters. The amount of sweat the servants spent in rushing up the mountain passes didn't concern them - a treacherous river crossing however would.

For this reason, the Nakasendo earned the nickname Hime Kaido, Princess Highway.

The Nakasendo had 69 post stations (shuku) between its two defining ends - Nihonbashi Bridge in Nihonbashi in Edo and Sanjo Ohashi Bridge in Kyoto. Not every traveler stayed at every station, however. It was often possible to bypass one or two before reaching the shuku where one would spend the night. 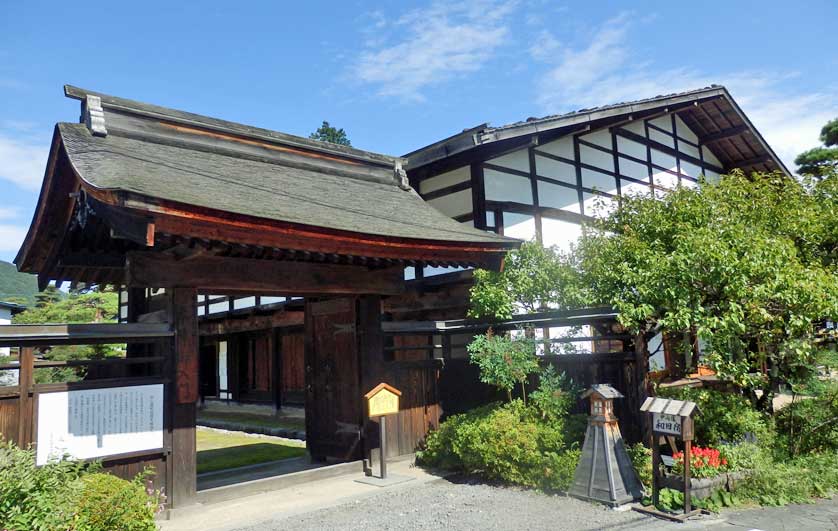 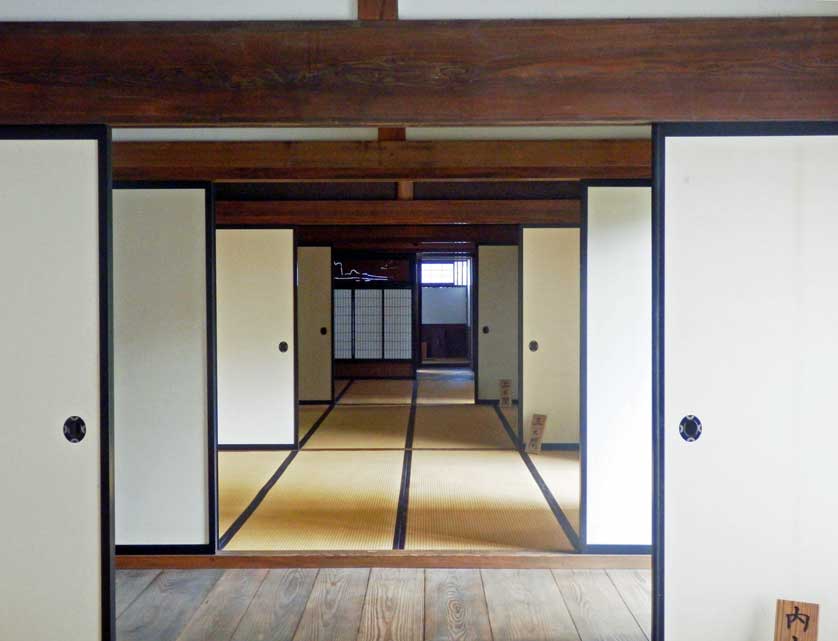 Wada Post Town, known as Wada Shuku in Japanese, served as the 28th Post Station (counting from Edo) on the Nakasendo.

Today it is a very well maintained and restored late Edo era post town surrounded by a scenic rural landscape.

Historically belonging to the Ueda Domain of Shinchu Province (aka Shinando Province), Wada is today part of Nagawa Town in eastern central Nagano Prefecture, about halfway between Karuizawa and Suwa.

Wada is situated close to the steep Wada Toge Pass (1600 meters), in historic times one of the toughest parts of the Edo - Kyoto trip. Before or after crossing the pass, the traveling parties tended to stay here a little longer than usual to either prepare for the hike over the pass or to rest after their journey passing it.

Therefore, the rest houses at Wada were much more numerous and more upscale for the high-ranking travelers than usual. 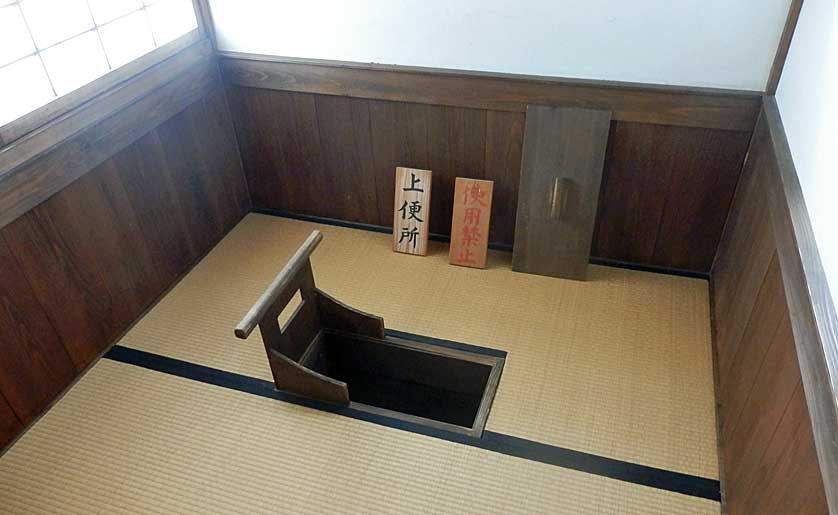 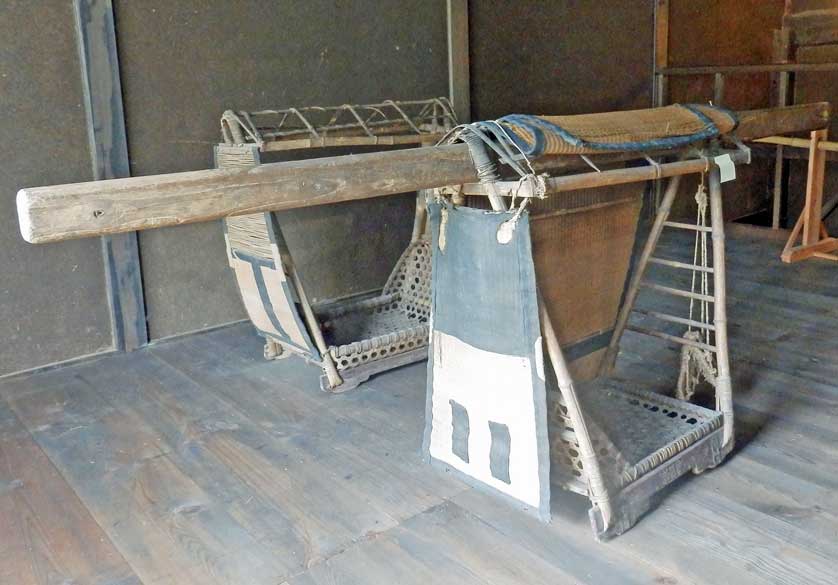 At any historic post station, the Honjin was the guest house in which the highest dignitaries stayed. It was reserved for members of the Imperial family, high-ranking government officials and provincial feudal lords.

The Honjin at Wada Shuku has been turned into a museum and provides impressive insights into the lifestyle of upper class Edo society.

Enter the large wooden gate leading into the courtyard, then turn into the main building. A lady sells the museum tickets in its genkan (entrance area) and then proceeds to give a very detailed tour to visitors.

Providing that no other arriving parties divert her attention, she will show and explain every nook and cranny of the large building. In Japanese, that is. For non-Japanese speakers, a few items on view are labeled in English but they don't provide the amount of the information the museum guide relates.

She will point out that the ceiling in the room in which the highest-ranking member of the traveling party stayed had a considerably higher ceiling than all other rooms.

She will also explain who stayed where, she will demonstrate that the staircase to the second floor had hidden wheels and could thus be removed to seal off the upper floor from any potential intruders. That second floor housed the valuables as well as the people in charge of them.

People familiar with today's Japanese-style toilets would naturally assume that that was the direction to face when squatting down.

The museum guide explains however, that the dignitaries squatted down in exactly the opposite direction: the wooden beam was designed to keep their kimonos from getting soiled.

Rather unusual was also the bathing arrangement. The guest house provided the hot water but the visiting dignitaries were expected to bring their own bathtubs.

Glass showcases display documents and artifacts relating to the history of the Honjin. They point out that the Honjin on view today had been originally built for one very special occasion - the trip of Princess Kazunomiya to her wedding in Edo in 1862. 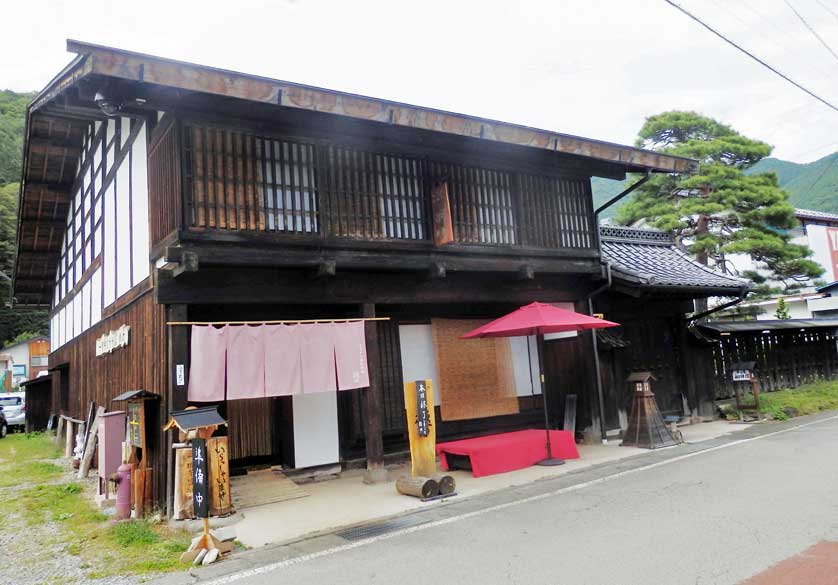 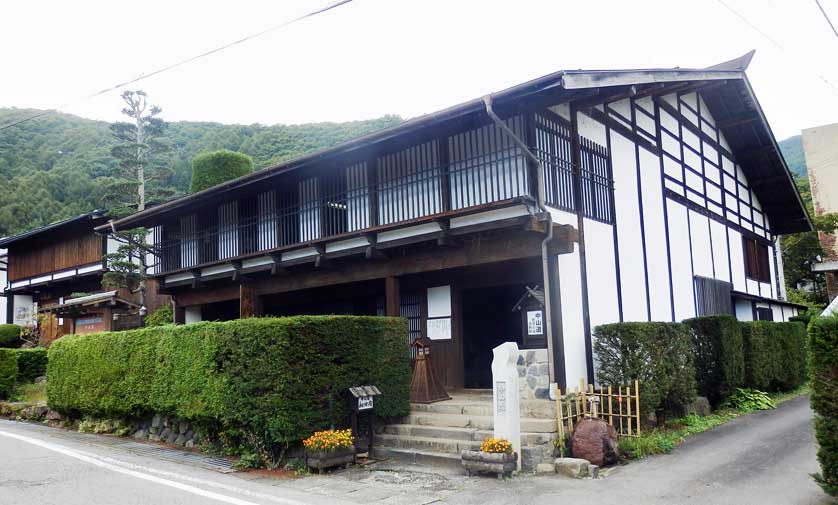 About two thirds of Wada Post Town burned down in a great fire in March 1861. A new Honjin had to be erected very quickly to accommodate Princess Kazunomiya. In order to do so, the family running the high-end guesthouse had to borrow a large sum of money from various temples and other wealthy entities.

When the family was unable to pay that money back in time, the Ryuganji Temple in Ikuta, Ueda city took the main guesthouse of the Honjin as payment - the building was dismantled and re-erected on the grounds of Ryuganji Temple where it is still on display today.

The Honjin buildings remaining at Wada Post Town have been classified as a national treasure. 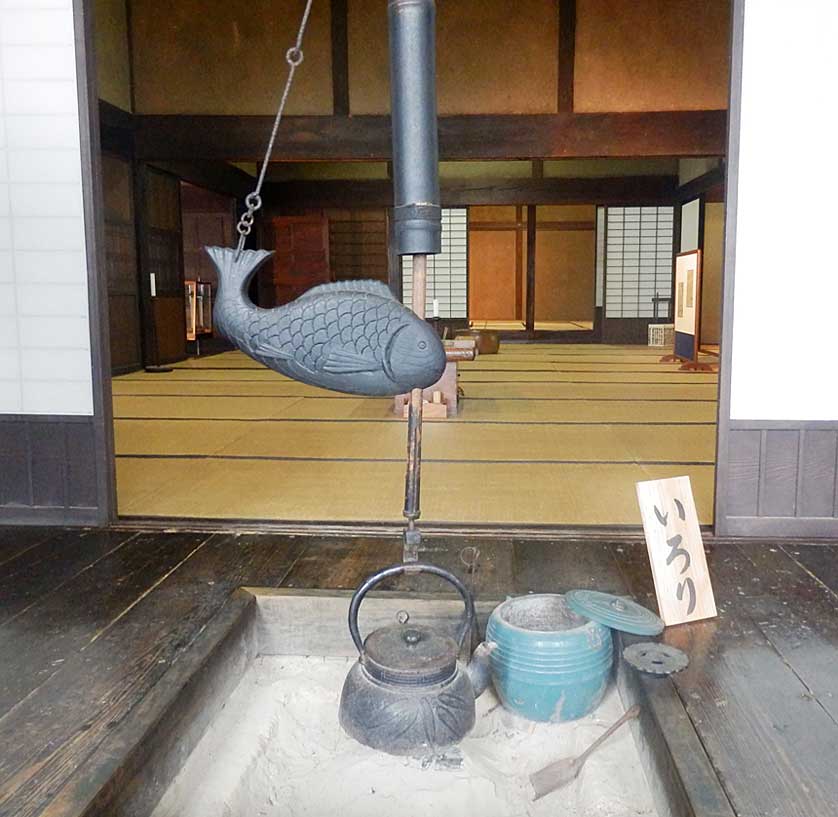 View into the Kawachiya Museum and irori fire place 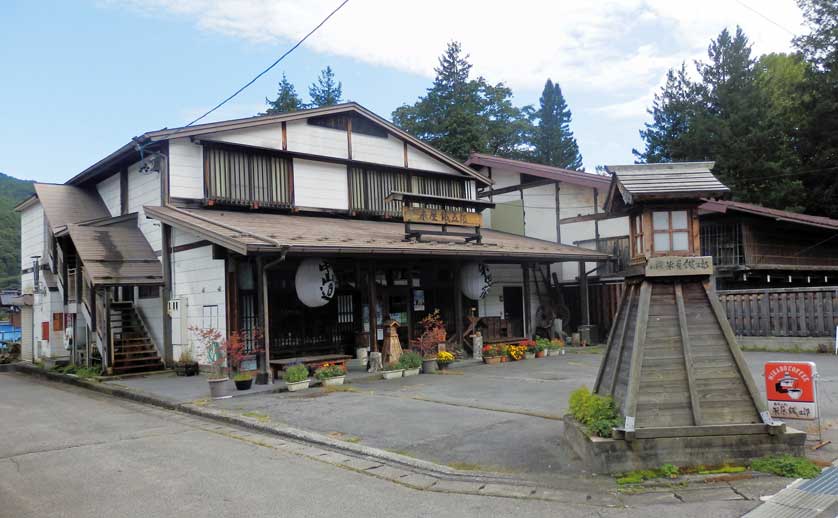 The 1860's were tumultuous years in Japan. Commodore Matthew Perry had already forced the Tokugawa Shogunate to sign the Treaty of Amity and Commerce with the United States in 1854, along with the opening of several Japanese ports to international trade.

The Tokugawa Shogunate was still the ruling government in Edo, while Emperor Komei held court in Kyoto. But great uncertainty prevailed of what the future might bring.

In an unprecedented move, the Tokugawa Shogunate decided that young Shogun Iemochi Tokugawa, only 15 years old at the time but already in power, had to marry Princes Kazunomiya, the younger sister of Emperor Komei, to solidify the political cohesion of the country.

Princess Kazunomiya initially refused. She had already been promised to another prince, she also feared that she wouldn't be able to keep her Imperial lifestyle in Edo.

Emperor Komei made his own demands: before the Shogun was to marry his sister, the treaty with the U.S. had to be rescinded and the ports closed.

To no avail. The Tokugawa Shogunate was still a more powerful force than the Imperial Court and succeeded with its pressure for the wedding.

In January 1862, Princess Kazunomiya set off for Edo, accompanied by a procession of 80,000 people. This might have been the greatest party ever to travel from Kyoto to Edo at once.

Most of those 80,000 accompanying the princess consisted of an army of protectors, however. Large numbers of samurai and warriors were provided by clans allied with the Shogunate.

At the time, anti-Tokugawa rebels, most prominently the Satsuma clan ruling Kagoshima, were already a serious threat to the Shogunate's policies. A kidnapping or assassination of the princess on the way to Edo would have led to open civil war.

The princess traveled safely, though. It was her journey that led to the quick rebuilding of the Wada Shuku Honjin - along with many other buildings in Wada destroyed in the fire of 1861.

The royal wedding took place in Edo on February 11th 1862. According to reports, Princess Kazunomiya got along very well with her husband. It was a short marriage, however.

Shogun Iemochi, the penultimate shogun, died at age 20 in 1866 of beriberi, then a virtually incurable illness. Kazunomiya subsequently became a Buddhist nun but remained active in politics, helping to smooth the paths of the Meiji Restoration. She died at age 31 in 1877. 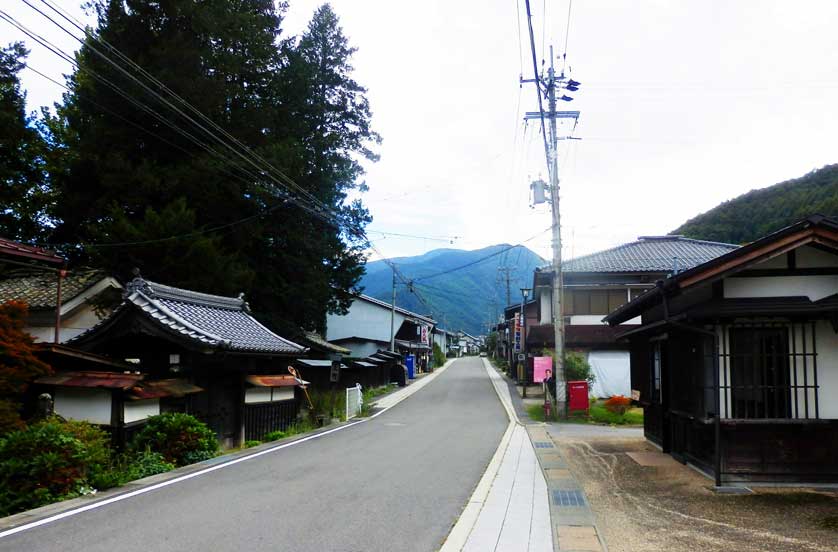 Wada Post Town consisted of many more buildings than the just the Honjin. Parts of that architectural scenery still remain today.

Just across the street from the Honjin is the Hatano. This building served as both home and office to the Edo government bureaucrat in charge of overseeing the operations of Wada Post Town.

The Hatano houses today a soba noodle restaurant. If you plan to dine there, make sure you don't arrive after lunch time. The restaurant closes once the noodles prepared for the day have sold out.

A little further down the road to the right is the Kawachiya. Besides the Honjin, this was the main guest house for higher class travelers in Edo times. Higher class but not quite on the same level with the top aristocrats staying at the Honjin.

The Kawachiya serves as the Wada Post Town History Museum today and is very well worth a visit. It is an exquisite Edo Period guesthouse with a fine Japanese garden in the back.

Walking in the opposite direction from the Honjin, you will soon reach the Komeya Tetsugoro Café. Erected on the site of an Edo era rice merchant's shop, from which it took the name, the Komeya is today a historically themed coffee house. 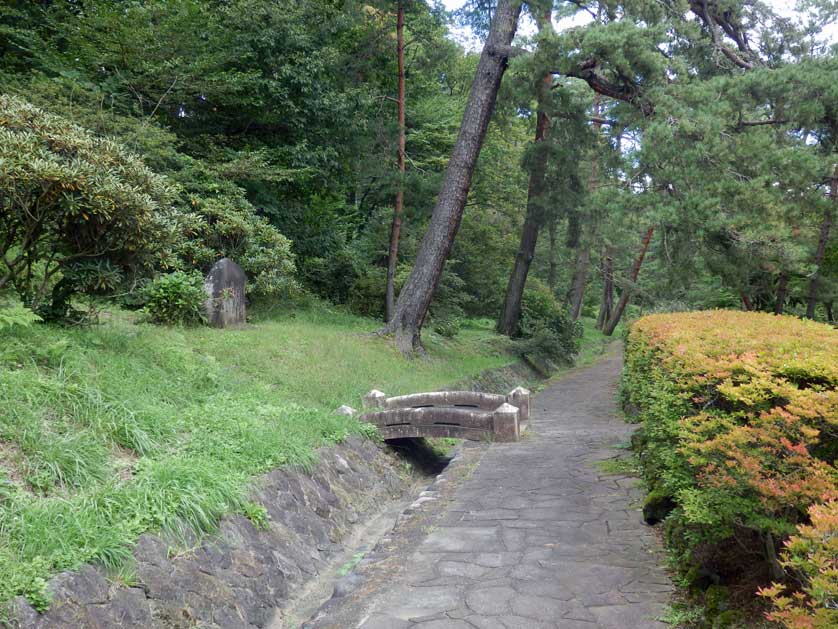 The old Higashi Shinchu section of the Nakasendo Road, traversing today's eastern part of Nagano Prefecture between Karuizawa and Suwa is a popular hiking destination. Though some sections of the old Nakasendo have been replaced by national highway 142, it is still possible to walk the entire length of the old Nakasendo. It leads though very scenic areas of central Japan and in many places the old Nakasendo has been restored as a hiking path.

An ideal time to hike / travel the Nakasendo part in central Nagano today would be September and October. Under the mild autumn sun you walk by the farmers busy with the rice harvest on their tiny fields, hanging up the rice stalks over bamboo poles to dry before threshing or erecting stocks of the bundled rice sheaves.

At the same time, grapes will be plucked at the many vineyards of the area. Most of the grapes are sold for immediate consumption though there are a few vineries in the vicinity turning them into fine wine. 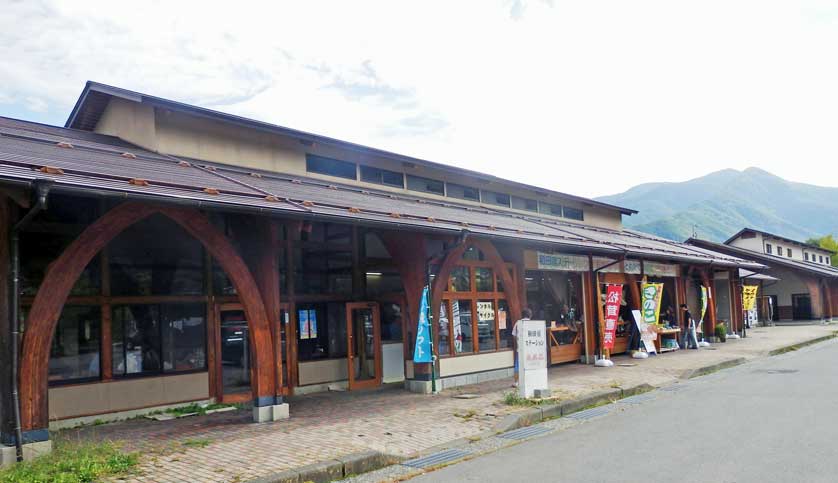 Wada Shuku Station on Highway 142 is a road-side rest house and in close walking distance of Wada Post Town. If you travel by car, the road-side station is the place to park and to walk to the Honjin and the other attractions of the historic village.

The farmer's store inside the station offers fresh products all year long but if you visit in autumn, you will find there a great assortment of wildly grown mountain mushrooms. 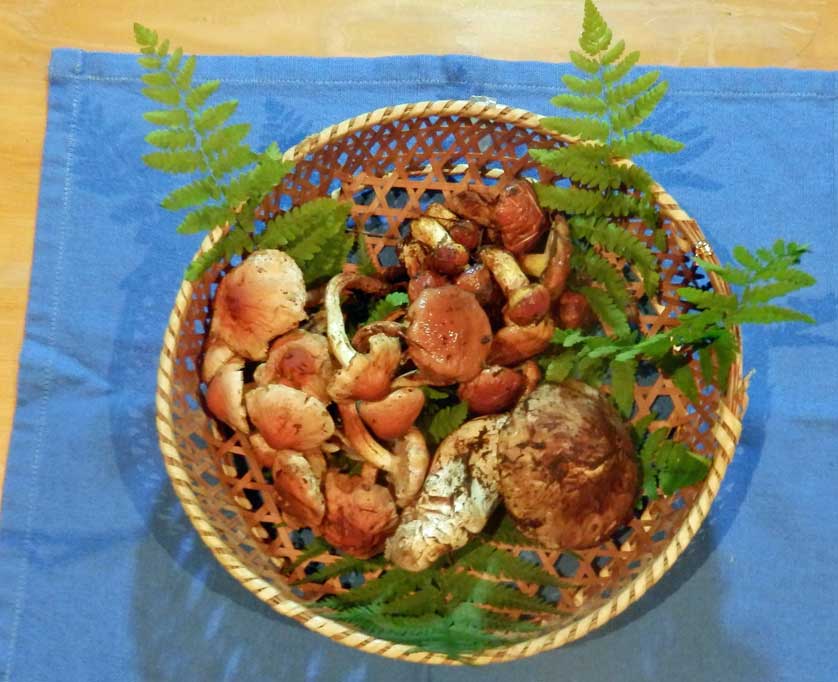 Mountain mushrooms purchased at Wada Shuku Station. The big one is a Matsutake mushroom

Opening times: 9 am to 4 pm, closed on Monday and during the winter season (December 1st to March 31st)

Admission: adults 300 yen, children 150 yen. The admission ticket is also valid for the Kawachiya Post Town Museum and a number of other historic buildings in Wada Post Town.

The expressway exit leads onto Highway 142. Turn towards Tateshina. Cross through Tateshina and follow Highway 142 towards Suwa. Wada Shuku Station will be on your left. Park there and walk into Wada Post Town.

Suemori Castle Ruins are now found inside Shiroyamahachimangu Shrine close to Motoyama subway station in Nagoya. The castle was built by the Oda clan.