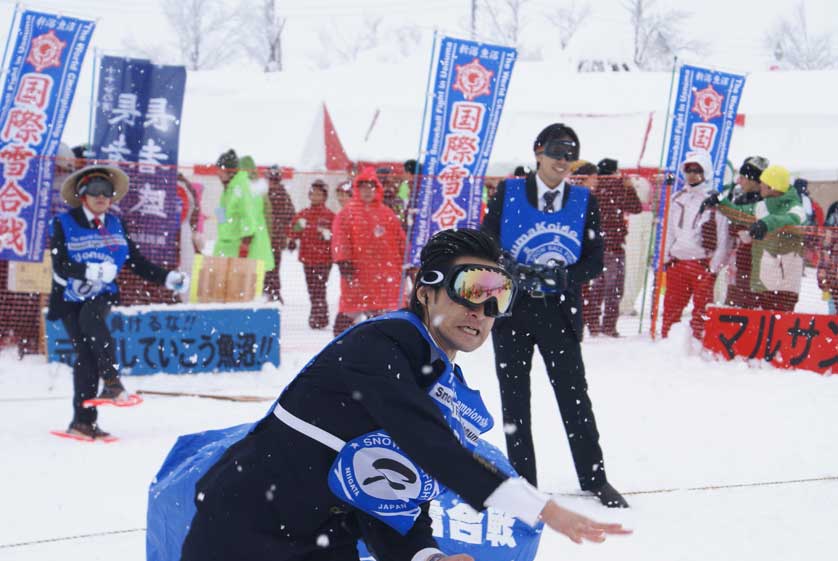 The International Snowball Fight in Koide, Niigata Prefecture, Japan, ranks among the zaniest sports competitions in the world. The oddest behavior, the widest smiles, and the deepest laughs seen or heard anywhere during Niigata's infamously long cold winter happen here.

Maybe it's the far-below-zero winter weather cracking the brain cells or maybe it's that the locals have gone stir crazy from being indoors under kotatsu for months. Whatever the reason is, Koide holds nothing back in preparation for Yuki Gassen, snow battle.

Costumed athletes stand around the outdoor podium, checking out each other as snowflakes fall on their hair, wigs, and masks. The main competition is about snowball fights, but there is also an informal competition to have the silliest costumes. The official rules state the dress code, which is as follows: Players must dress up in "EYE-CHATCHY" costumes (clothings) as much as possible. (DRESS YOUR NOTICEABLE !!) 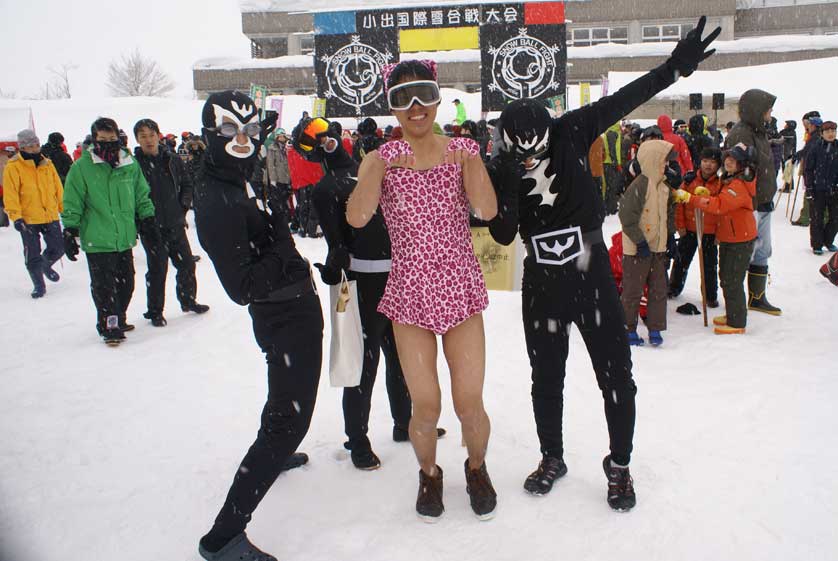 Despite shivering in the cold of Japan's deep snow country, some men wore bikinis. There were teams of space aliens and characters from video games. For example, one team wore costumes, wigs, and makeup to look like characters from the Super Mario Brothers game series. Mythological Japanese monsters, called yokai in Japanese, were the themes of other teams. Famous movie series characters were also represented. One team featured men dressed in suits like the evil Agent James and Agent Brown from the Matrix movie series. These athletes showed their skills of throwing snowballs and dodging snowballs while moving in slow motion, like the main character dodging bullets in the original movie.

After the official rules are explained, the snow battles begin. Despite the games being governed by official rules, the fairness of judges is questionable. The rule book stated "BY THE WAY..., gifts for CHIEF JUDGE will be highly welcomed!" Before their match started, one team of sake company employees gave a bottle of sake to the chief judge. Maybe the team members were not sober: they quickly lost their match, but in the middle of the court they graciously poured sake for the winners. 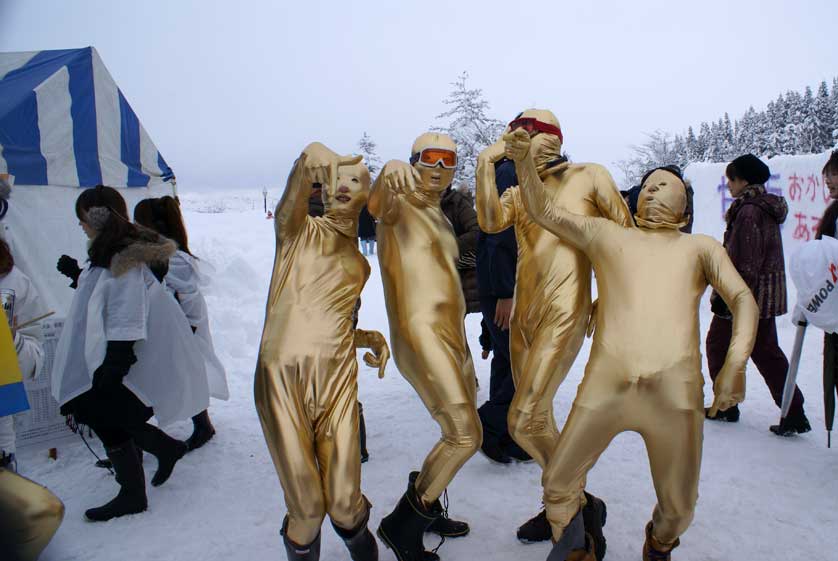 The rules are simple. Each team has five members. At the start of the match, male athletes have three points and females have five points. Judges deduct a point for each time that a snowball scores a hit on an athlete. An athlete with zero points must ignominiously depart the battlefield. Winners are decided in three ways. A team wins when all of the opposition is killed off by snowballs, or at the end of the three-minute round, the team with the most surviving members or most points is declared the winner. In the case of a tie, winners are decided (after all this is Japan) by jan-ken, the Japanese version of the hand game called rock-paper-scissors.

Provocative taunts and body gestures are common and expected during matches. One team dressed as ducks quacked aggressively, turned, and shook their tail feathers at the opposing team of aliens. The aliens garbled something, probably very rude, in their language. The ducks won that match, saving the Earth from the invading aliens and their snowballs. The ducks returned for another battle in the second round, but fowled up and lost that match. 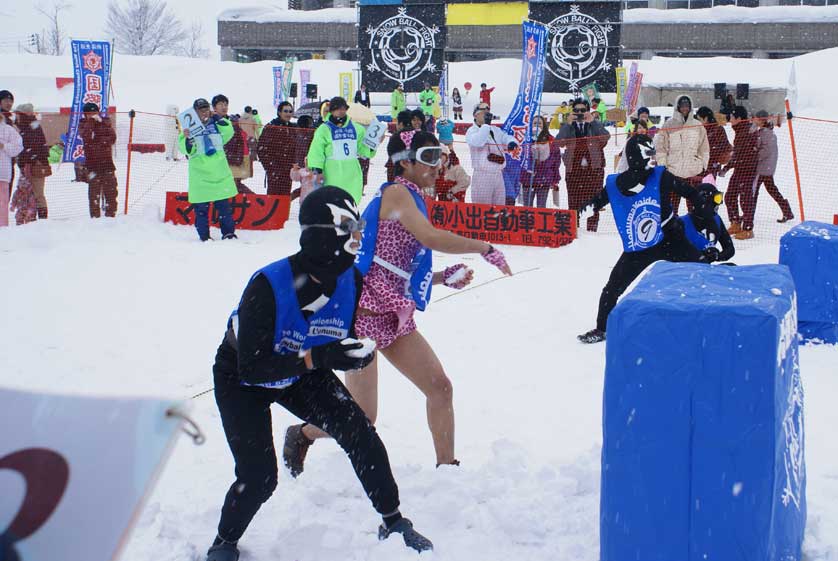 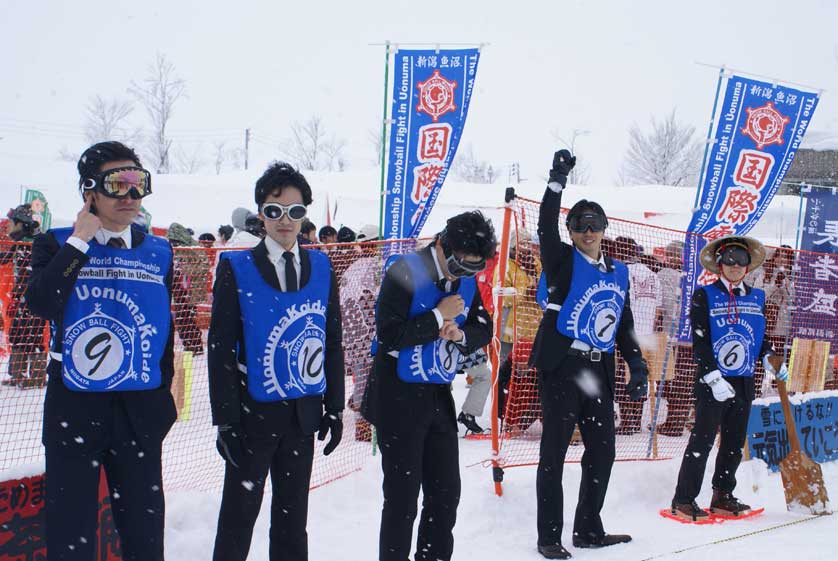 The event organizers insist on noise and drama before, during, and after each match. The official rules stipulate that "when the game is over, both team players are lined up at the END LINES. The winning team players raise the fists in the air, and make some courageous WINNER'S SHOUT! The LOSERS (as weak fellows, crying babies) must SURRENDER and show a big DISAPPOINTMENT. Make It Dramatic!!"

The courts, or battle fields, are constructed of flattened snow. They are divided in half, and each side has small defensive walls placed in a few locations. These walls are just high enough for snowball athletes to crouch and hide behind. During the heat of battle, some of the more active athletes leap or roll over the walls while pursuing opponents or being pursued. Nets surrounding the battle zone protect fans, cheerleaders, and passersby from the trajectories of errant snow missiles. 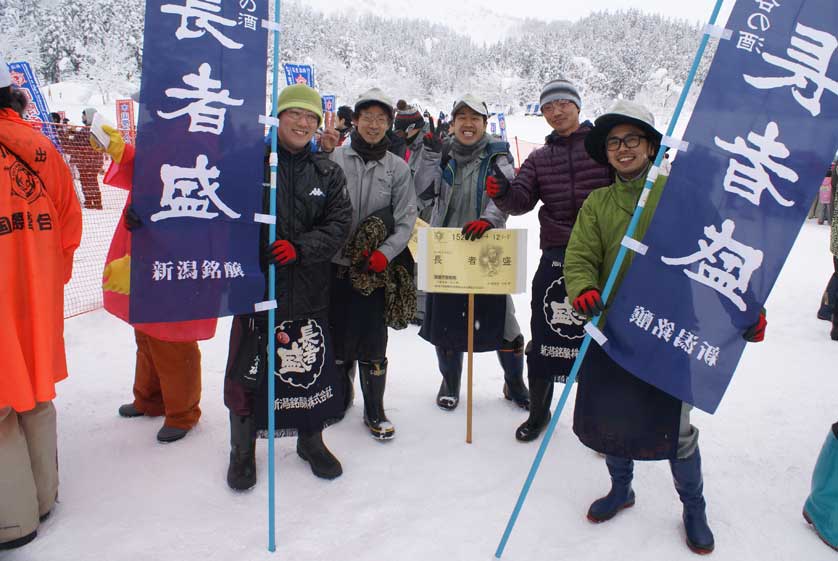 Niigata's quirky Snowball Festival is gaining in popularity each year 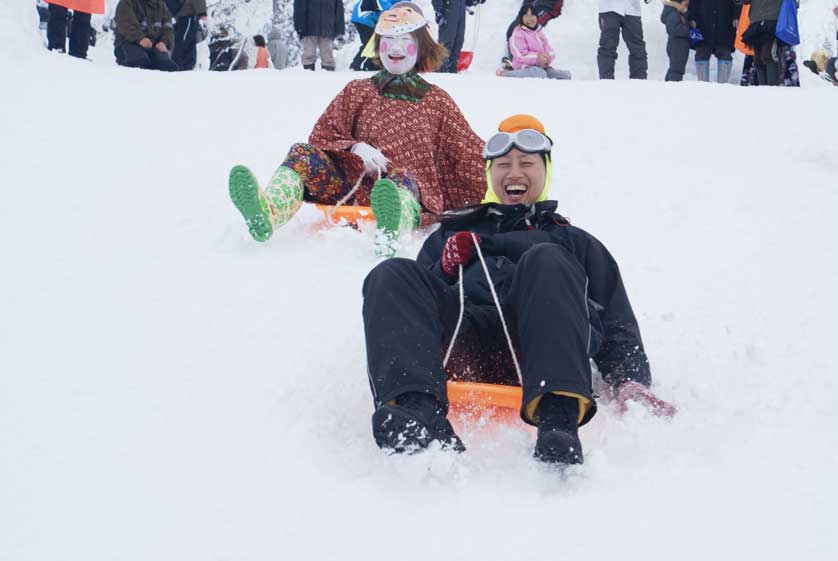 Enjoy sledding at the Snowball Festival in Niigata

In between matches, the snowball-fight athletes and their entourages can enjoy watching all of the other strange people or buying and eating festival-type meals while resting in a heated auditorium. Numerous other fun and unusual activities are available outside in the snow, too.

Neighborhood associations from within Koide prepare unusual local specialties that they offer in shops built with walls of snow and ice. Salted freshly caught river fish and a local version miso soup were very popular. One atypical for Japan, but local winter drink is a cup of hot sake with a strange-looking, tiny river fish that was roasted over coals to the extent that it was charcoal black. One foreigner said the river fish looked like the larval form of Godzilla, and it tasted like hot sake with a piece of burned Godzilla in it. The burnt fish gave a smoky taste to the sake. For drinkers of other alcoholic beverages, a bar made from snow was fully stocked with icy-cold drinks.

The locals are very proud of their foods and drinks and serve them without charge to all attendees, who are all viewed as guests. If a person feels like dropping some money in a box to pay for expenses, that is appreciated, but not required. One of the locals said that the donations usually cover their expenses, and they do it for fun, not money.

Children made snowmen, clambered up and down mounds of snow, fought impromptu snowball battles, and built caves in the snow. However, the most popular children's activity was sliding on sleds down a specially prepared slope that was wide enough for around eight children to descend simultaneously. The kids careened off each other. Parents could be seen and heard imploring their screaming, kicking, and laughing children to leave. Many parents eventually gave up, sat on the too-small sleds, and slid down the hill while screaming wildly along with the smaller kids.

The snowball fights have become a traditional event that will take place again next February. You would be insane to miss this craziness. For more information, click on seinenbu.uonumakoide.com/yuki 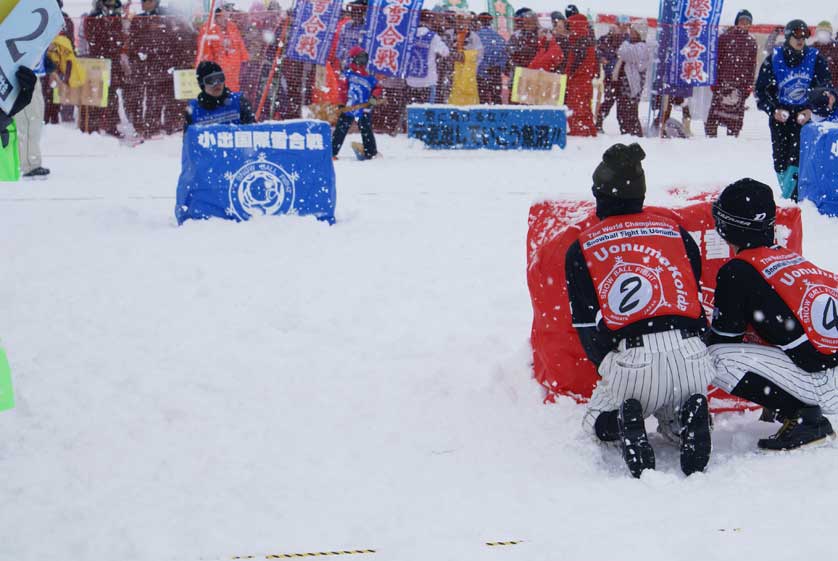 By train from Niigata, change at Urasa for Koide. The journey time is 39 minutes from Niigata Station to Urasa and then 10 minutes to Koide. From Tokyo Station on the Jotetsu shinkansen is 95 minutes to Urasa. From Koide to the event is ten minutes by car or taxi. Koide is part of the city of Uonuma.