Johnson Town is an enclave of carefully restored American suburban buildings in Saitama Prefecture dating back to the early 1950's.

Johnson Town is an enclave of carefully restored American suburban buildings in Saitama Prefecture dating back to the early 1950's. Located in close vicinity to Iruma Air Base, with which it shares much history, Johnson Town is today a vintage America-themed, privately owned neighborhood offering a large number of cafés and restaurants as well as many antique shops specializing in Americana.

Though American culture of the 1950's is greatly celebrated in Johnson Town, virtually all shop /restaurant owners are Japanese, catering to Japanese customers. Actual Americans are a rare sight in Johnson Town, save the occasional young Mormon missionary from nearby Tokorozawa Mormon Temple in search of a good old-fashioned home-style hamburger. 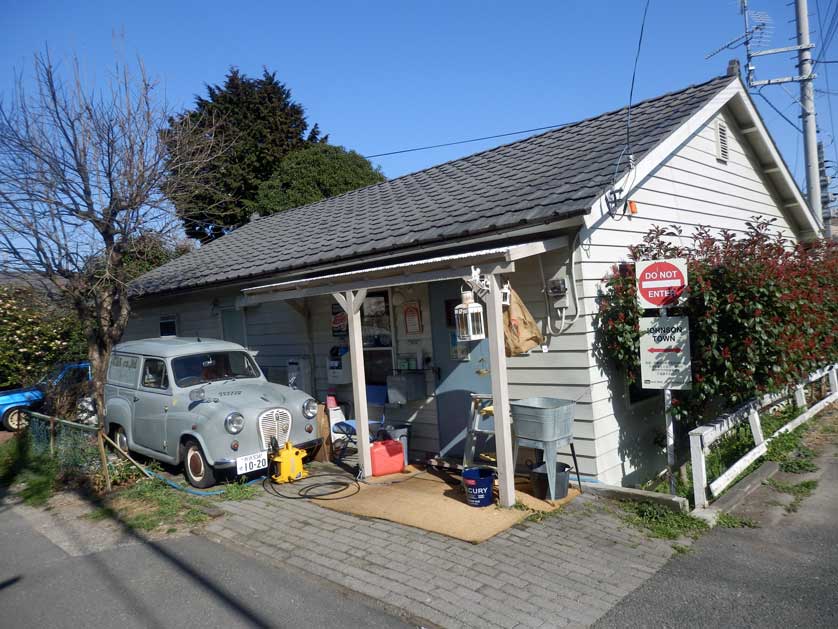 Iruma Air Base, located on the border of Sayama and Iruma towns northwest of Tokyo, is not only a huge and busy Japanese military flight hub but actually serves as the headquarters of the Japan Self Defense Force's Air Defense Flight Group.

Airplanes of all sizes, shapes and forms fly in and out all day long, thundering over the wider area before reaching their altitude.

The air base was originally established in 1937 as Irumagawa Airfield. it played its role in WWII including the deployment of kamikaze suicide missions and, like all other Japanese military installations, was taken over by the U.S. after the war ended.

That latter responsibility turned the air base into a field of extreme activity during the Korean War (1950-1953). Bombers, jet fighters engaging in air combat, reconnaissance missions, troop supplies - a great deal of the air support for the American troops fighting Kim Il Sung and his Chinese supporters took to the sky from here. 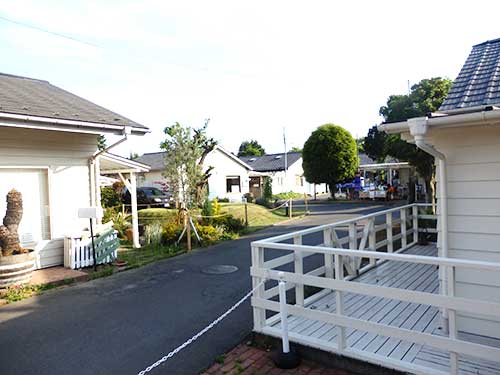 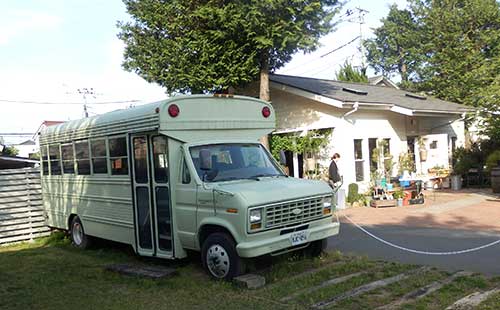 The Korean War called for many additional American Air Force personnel to be deployed to the base. New neighborhoods sprung up around the airbase to house the higher-ranking officers and their families.

Those neighborhoods were designed to provide not only all the amenities an American officer abroad had come to expect from the American military but also to provide the feeling of really being at home.

Thus, the newly built, exclusive officer neighborhoods resembled exactly the type of American family-style suburbs that started to come into fashion in America in the early 1950's.

Standardized wooden buildings with a porch in front, with neatly trimmed lawns outside, with a burger joint around the corner, a bar nearby, American schools in the vicinity and various spaces for community-related activities in close walking distance.

Thus, say, returning from a mission bombing Pyongyang, the officer in charge could just go back to a life that would exactly feel like life back home in the States.

Many of the officers living in those enclaves had hardly any contact with Japan at all; they lived in their own newly constructed communities and ventured out only when their job called for it.

Ichiban Village, Shinden Village, Hyde Park Annex and American Village, to name a few of the American officers' housing areas on the Iruma side of Johnson Air Base at the time, were exclusively American exclaves where only the weather was Japanese - and perhaps a few low-ranking employees. 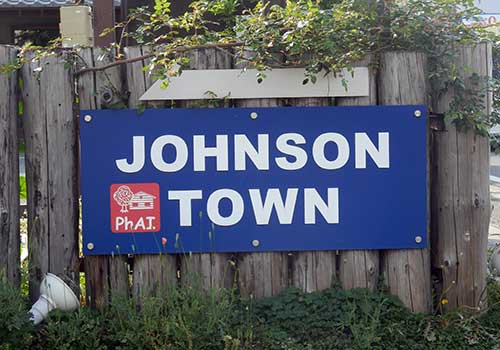 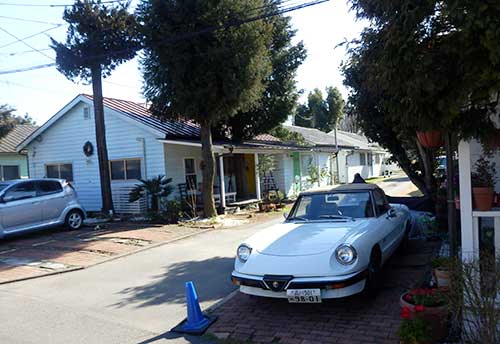 With the end of the Korean War in 1953, Johnson Air Base lost its military importance and activities there were drastically reduced. Many of the Airforce units based at Johnson Air Base were relocated to Yokota near Yokohama. In 1962, the U.S. Airforce terminated its use of Johnson Air Base and handed the base over to the Japan Self-Defense Force.

As a result of those developments, the American officer housing areas became obsolete. The officers and their families moved elsewhere and, very quickly, eager Japanese real estate developers took over, demolished the American villages and built Japanese-style suburban housing for a quickly growing Japanese middle-class looking for affordable housing in the immediate vicinity of Tokyo. 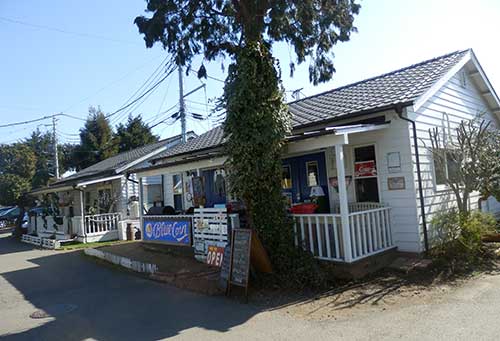 The Isono Corporation, the land owner on whose property such an American officers' housing area, Shinden Village, had been built, was slow to catch on to the new developments. They left the American suburb-style buildings intact, renting them out to Japanese families on the cheap.

It took up to 1996 for Mr. Isono, the heir of the Isono Corporation, to realize the full potential of the property. In that year and with the help of architect Osamu Watanabe, Mr. Isono started the restoration of the old American buildings.

By 2004, the village of refurbished buildings, re-named Johnson Town, was ready for its first tenants.

Johnson Town clearly stood out from the general neighborhood: a picture-perfect 1950's-style American suburb amidst the surrounding sprawl of standardized Japanese middle-class buildings.

Though originally built for military officers, the area now attracted artists and other creative types. Soon, a wide range of cafés, restaurants and more or less funky stores opened, turning the neighborhood into a destination for Tokyo day-trippers. 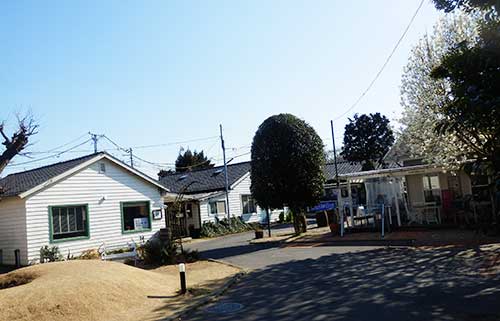 Johnson Town sports a little over 50 different businesses catering to the public. They range from dentists and wellness clinics to a variety of antique shops, specializing in Americana, to a great number of Western-style restaurants and cafés.

Though both shop operators and customers are Japanese, quaint old America is the theme here. "Home-made" hamburgers dominate the menus of the restaurants, and vintage American and European cars are prominently parked to add to the atmosphere.

The very center of Johnson Town is a small intersection adjoined by Café Marcus and Culture Café Grandir. The two cafés, attached to each other in an L configuration, both offer tables on their porches, right under the big magnolia tree in front of them. Drinking coffee on the porch of either café on a sunny day in March, when the tree is in full bloom, is an extraordinary experience.

Though very lively in the daytime, Johnson Town closes early in the evening. A few restaurants stay open late - but don't expect much of a night life in Johnson Town.

Kan-Etsu Expressway from Nerima to Tokorozawa Exit, Highway 463 to Iruma. Johnson Town is directly on the left side of the highway, paid parking available. 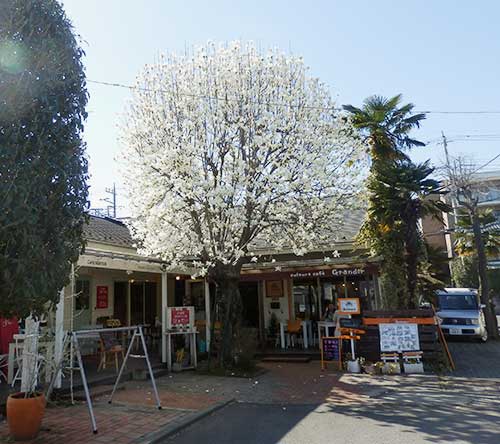